A Journey from Mandir to Masjid

Amdavad, that’s how we Gujaratis pronounce the city of Ahmedabad. Wondering what is famous in Ahmedabad? This city where I started my career and spent almost a decade, became the first city to be inscribed on UNESCO World Heritage City in India list in 2017. Owing to this accolade, this buzzing city popularly known for its association with Mahatma Gandhi attracts tourists from all over the world. Ahmedabad is famous for its unique multicultural heritage. Ahmedabad Heritage City is an archeological entity with a complex maze of centuries-old vernacular houses built with finest medieval Indo-Islamic architecture.

Ahmedabad location in India map is on the banks of Sabarmati River. The river divides Ahmedabad into two physically distinct regions, east and west. On the western bank is the city with modern architecture and buildings, developed in the last 100 years. However, the region in the east is the citadel built by Sultan Ahmed Shah in 1411 AD. For decades Amdavadis called it the "old city" but recently the term "The Walled City" was coined for better understanding and to lure tourists. 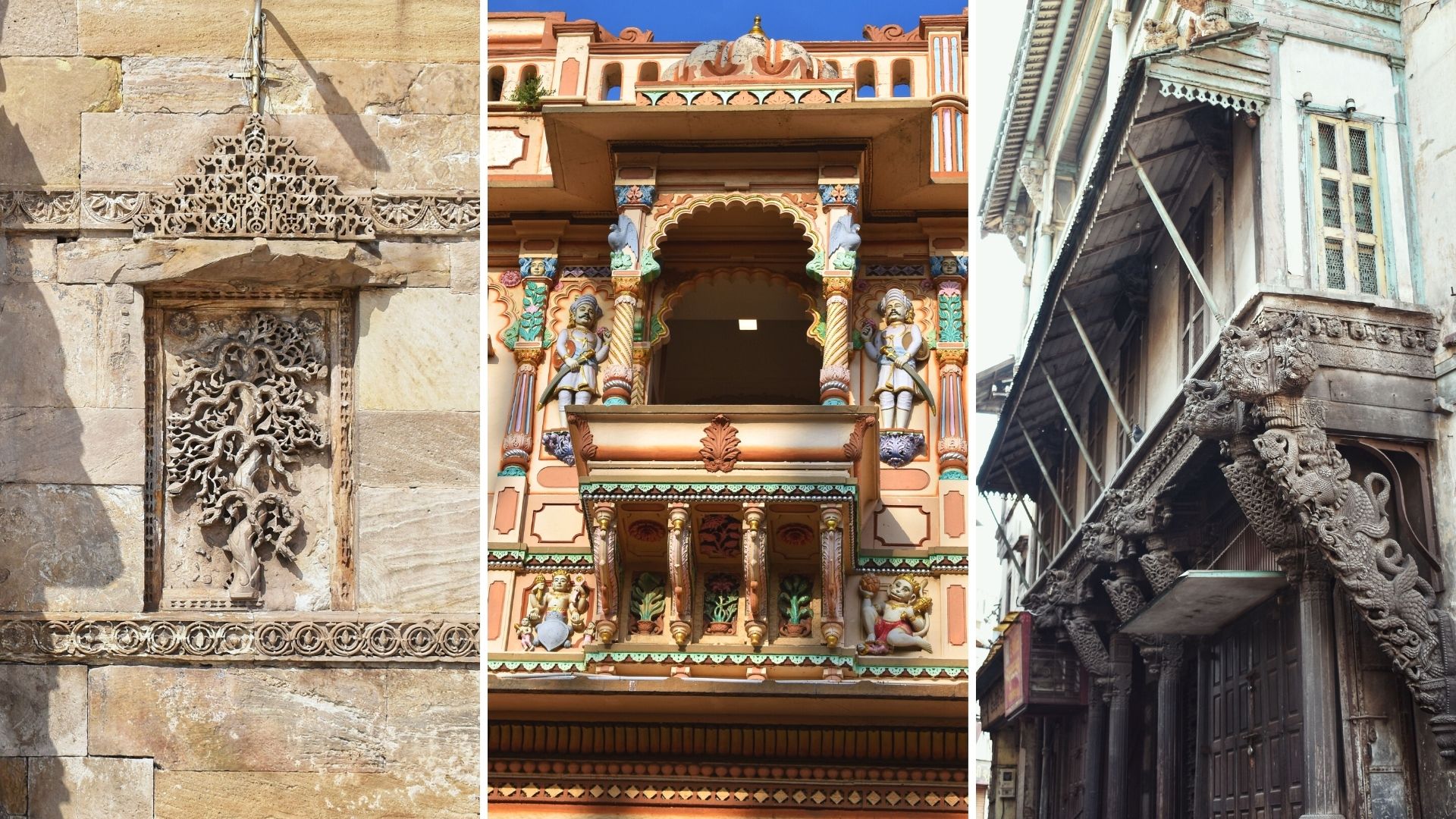 Ahmedabad Municipal Corporation (AMC) and Akshar Travels have designed Heritage Walks to experience the fusion of heritage & architecture embedded in ancient temples, mosques and historical sites near Ahmedabad. This 2-hour guided tour starts at 7.45 am from Swaminarayan Temple in Kalupur and ends at Jami Masjid at 10 am, covering 2 kilometers. Usually, prior booking is recommended but due to Covid, inflow of tourists to Ahmedabad is limited hence, I didn't have to make a prior booking. It costs Rs. 200 per person. 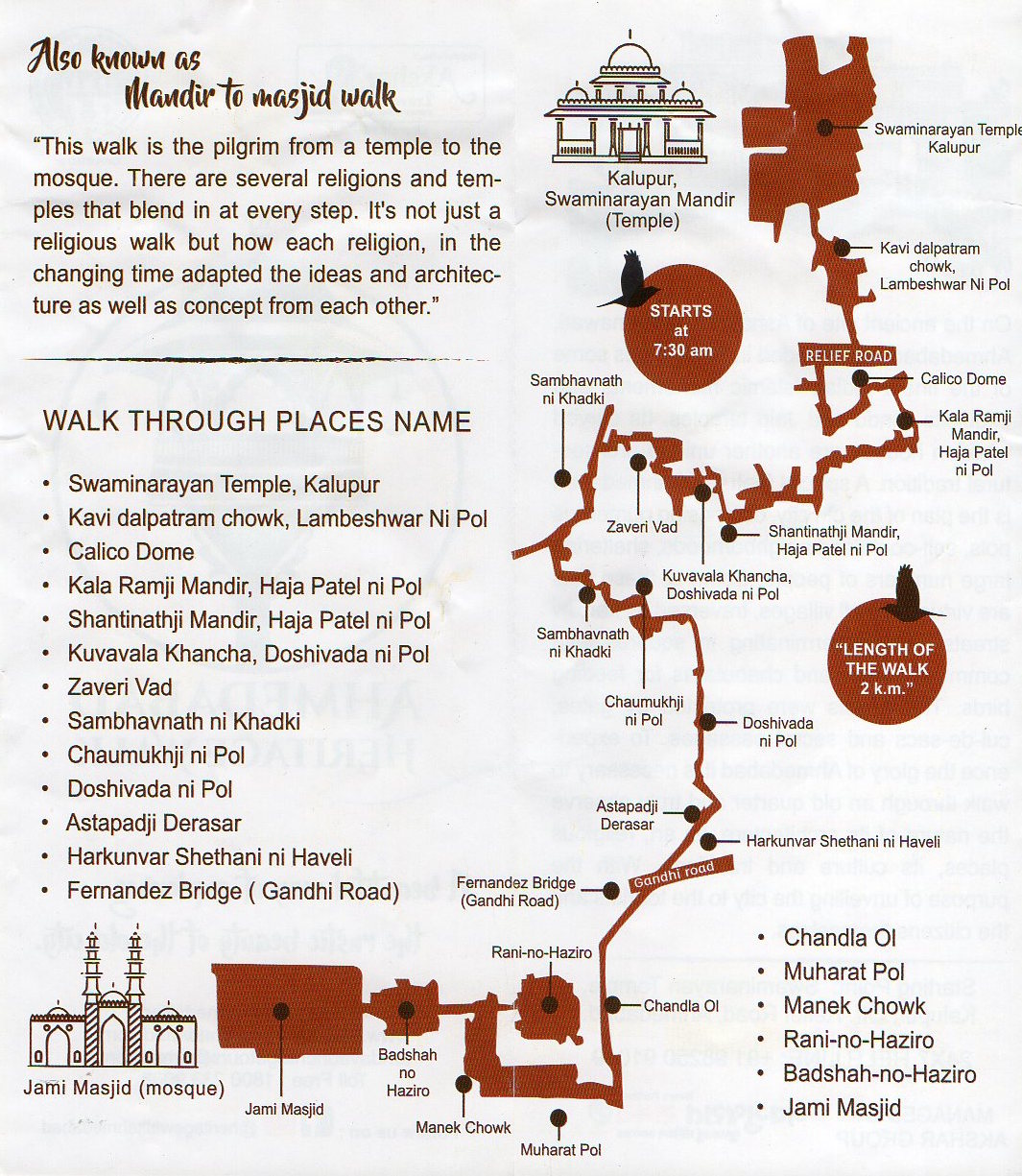 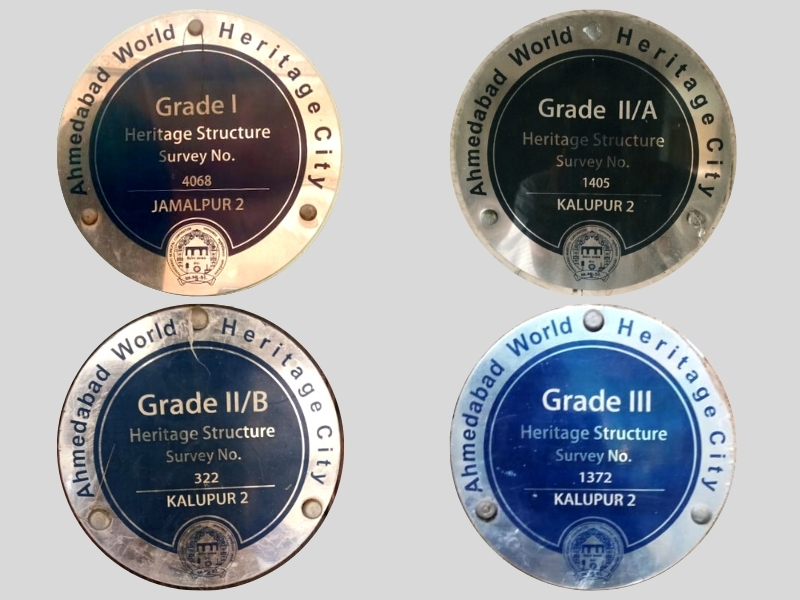 The walled city is quite dense so car parking is a nightmare. I reached Swaminarayan Temple at 7.30 am and found ample parking inside the temple. The walk starts with a screening of a 15-min documentary film on the history and monuments of the UNESCO World Heritage City in India, Ahmedabad. After a 5-min break to offer prayers in this 200-year-old temple and take some pictures, the walk begins at 8 am. 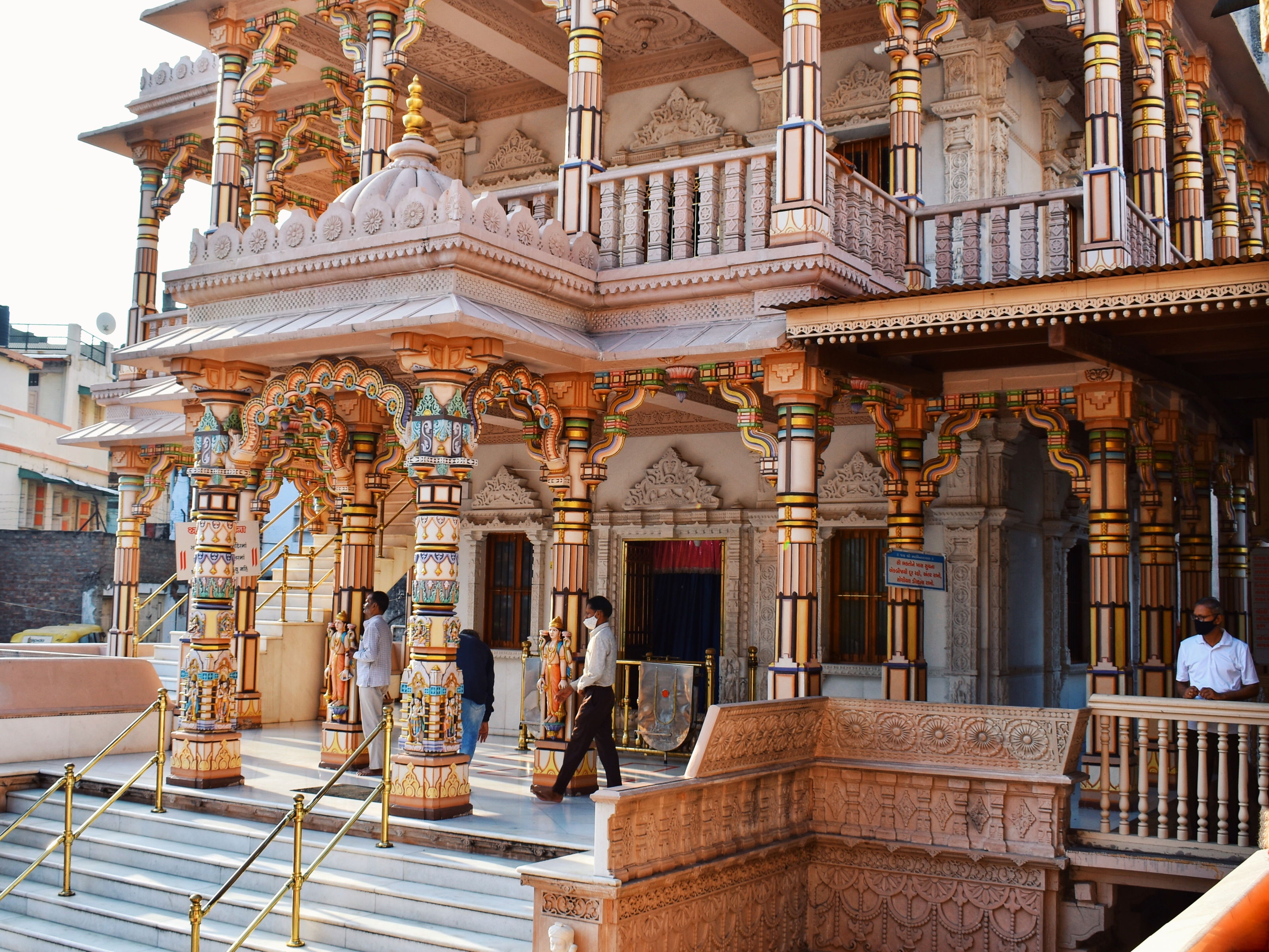 This is the first temple of Swaminarayan Sampraday (religious sect), built in 1882 from the land gifted by the British Imperial Government. This religious icon is a cultural heritage of Gujarat. 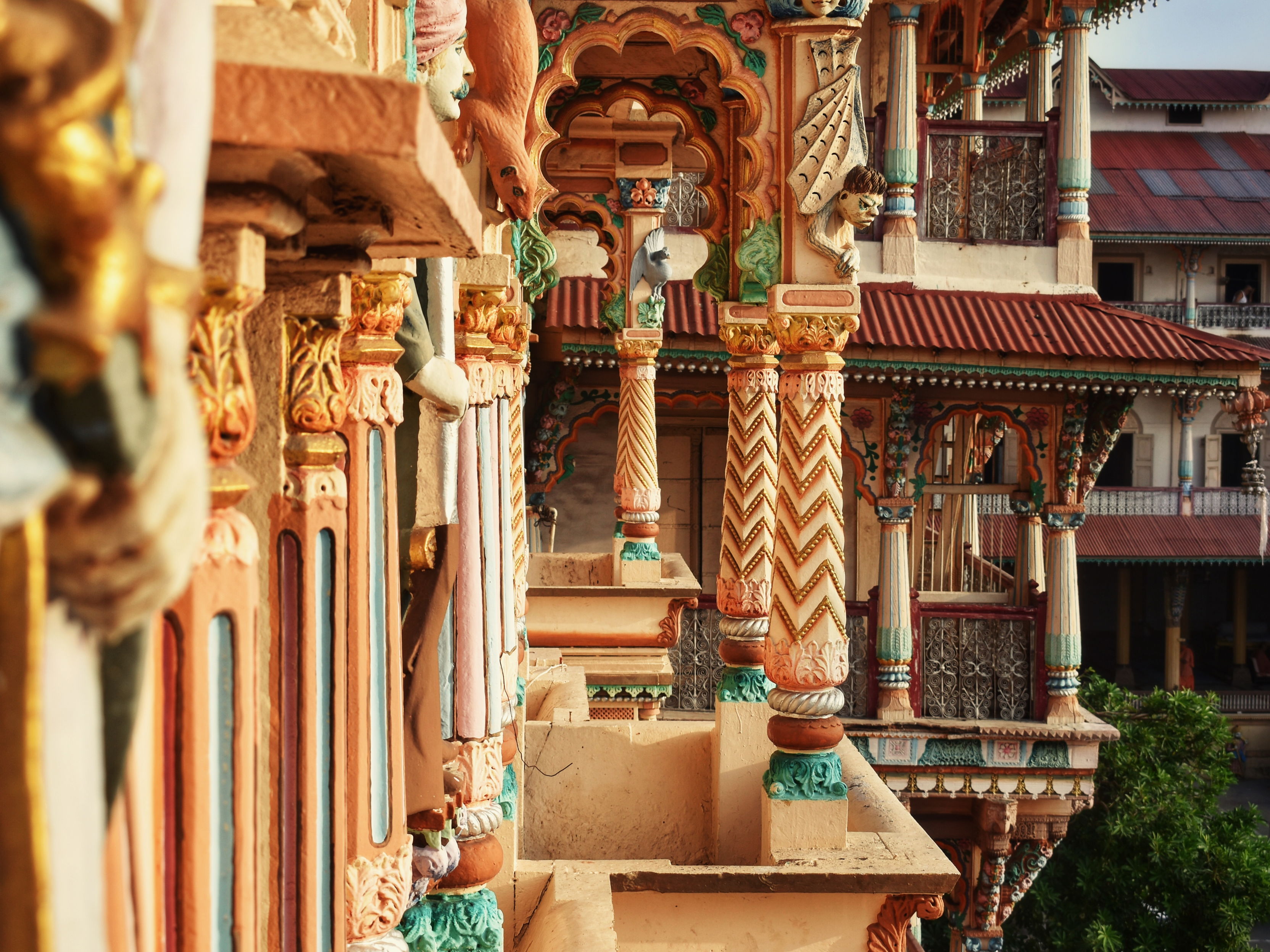 Being a weekday, we were only 2 people making it a more personalized tour. Our guide Murtuza Bhai was highly knowledgeable and passionate which enhanced our experience. It is a tradition in Gujarat to address a male with "bhai" (brother) and a female with "ben" (sister) followed by their names to show respect.

Our first stop was at Kavi Dalpatram Chowk located in Lambeshwar ni Pol. Chowk is a place in the center of a community neighborhood where people come together to socialize. This is a LIVE memorial of Gujarati poet reformer Kavi Dalpatram Dahyabhai ("kavi" means poet). Heard of a live memorial before? Well, Murtuza Bhai explained that memorials usually have a standing statue but here is a sitting statue which communicated a clear message. It was an invitation for people to come together and socialize. 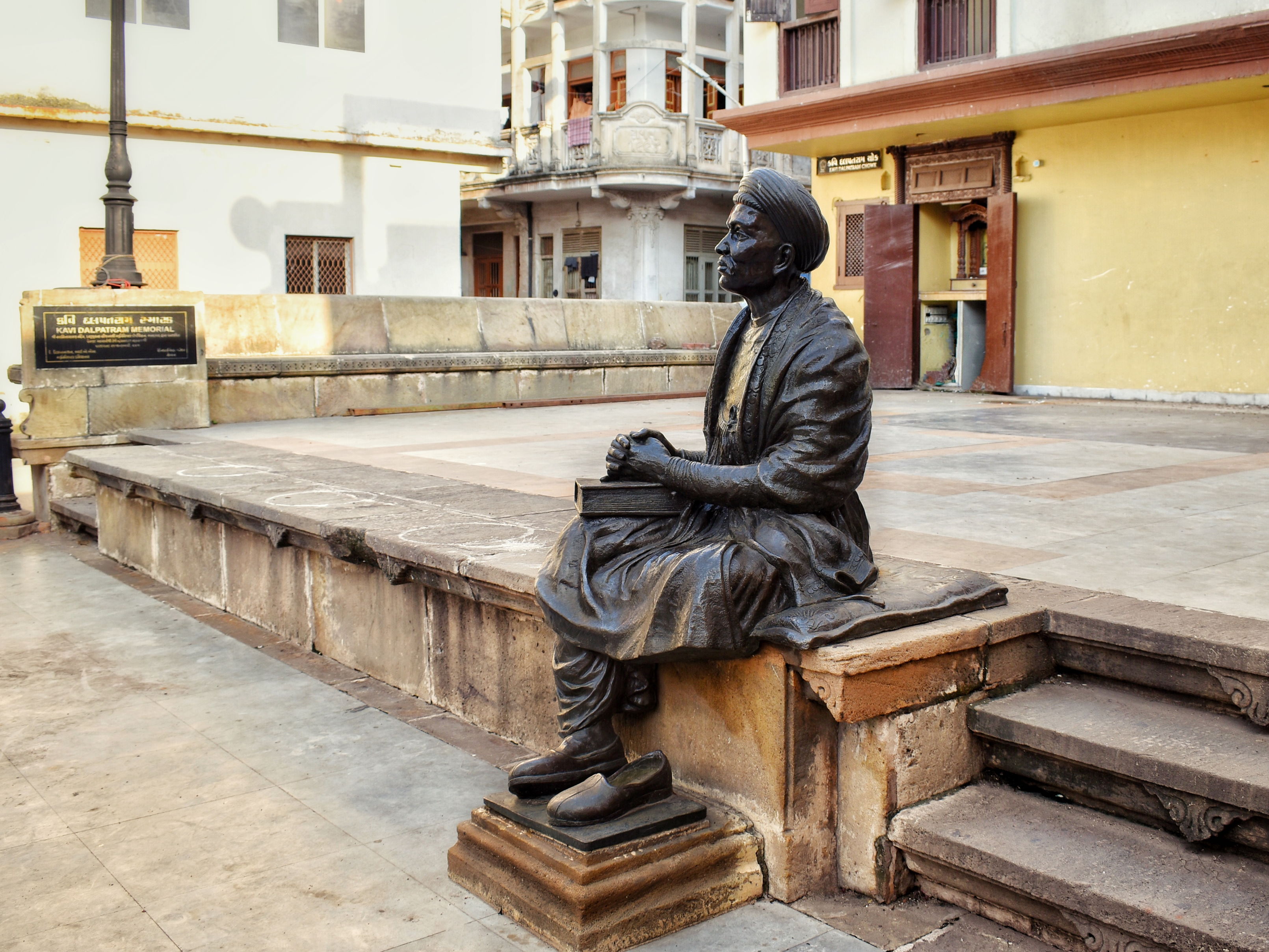 The other striking aspect of this statue is the posture. The Kavi sitting with his left leg folded removing one of his shoes is reminiscent of an age-old Indian culture. Does it not remind you of childhood days when you bonded closely with grandparents sitting on their lap and walking in their shoes? That is exactly what this posture communicates, a message of love and bonding. 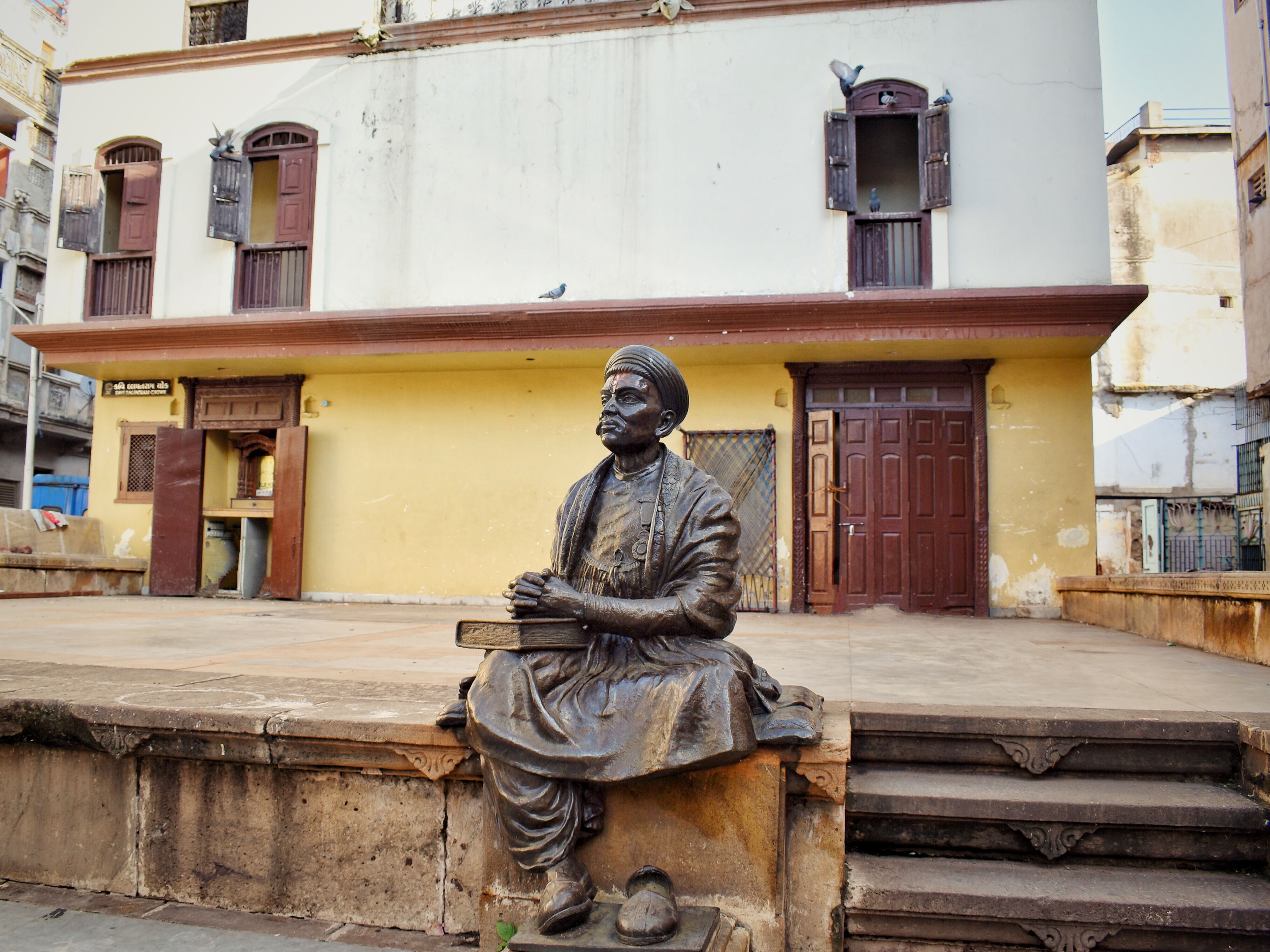 This UNESCO World Heritage City of India is nestled with hundreds of "Pol" situated adjacent to each other. "Pol" means "gated community". Each Pol has a unique name signifying Ahmedabad historical places or the community living there e.g. Hindus, Muslims, Jains, etc. There are four things common in each Pol. 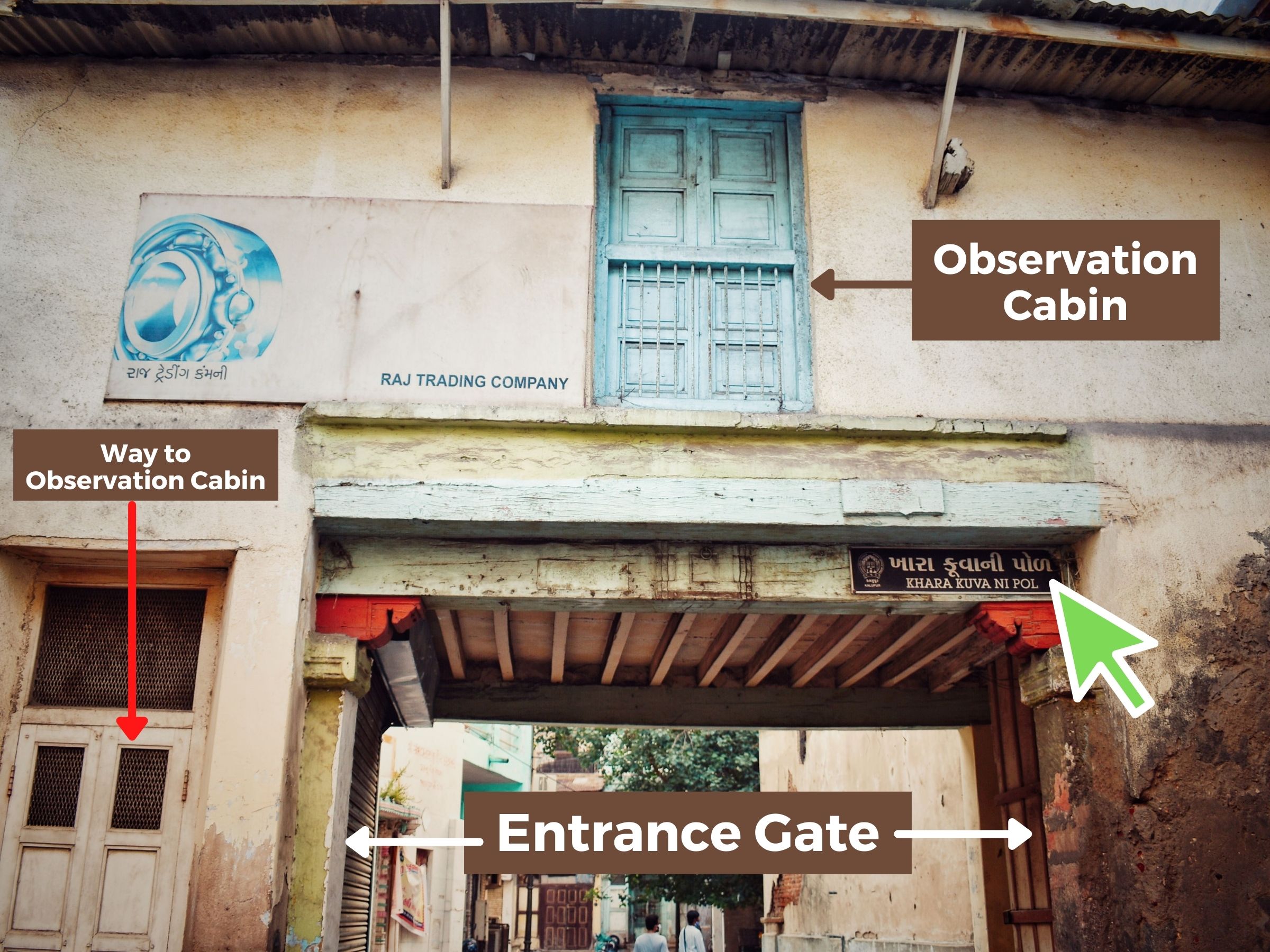 The walled city is crowded with little space for trees and plantations. Surprisingly, it attracts a huge number of birds, more than the new city that has many trees. "Chabutaro", an octagonal pavilion mounted on a tall column is a common sight here. The word Chabutaro is derived from "Chabutar" (Pigeon). These structures are shelters for birds providing them with food and water. The ladder used to reach the top of the pavilion is rather steep, intentionally designed to curb dogs and cats from climbing up and devouring the birds' feed and water. 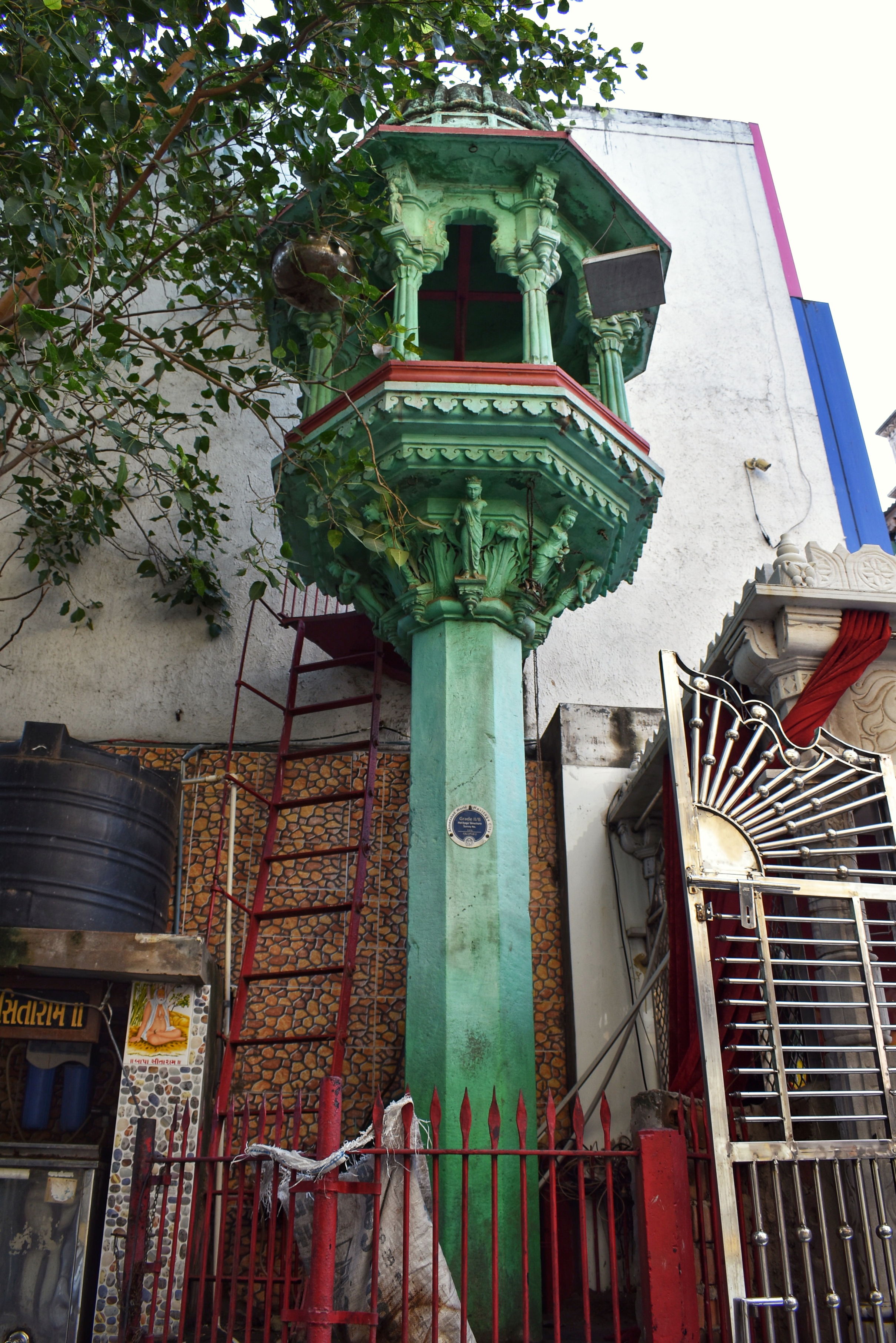 Chabutaro - a symbol of Gujarati hospitality

When a massive earthquake wreaked havoc in Ahmedabad's new city in 2001, casualty in the old city was expected to be magnanimous due to centuries-old buildings that connected to each other wall-to-wall. Surprisingly, there was minimal damage, wondering why? These old buildings were built with teak wood columns and wall-to-wall support. Teak wood possesses elasticity so during the earthquake these pillars adjusted its shape and realigned without breaking. Concrete pillars on the other hand gave in to the force of nature. 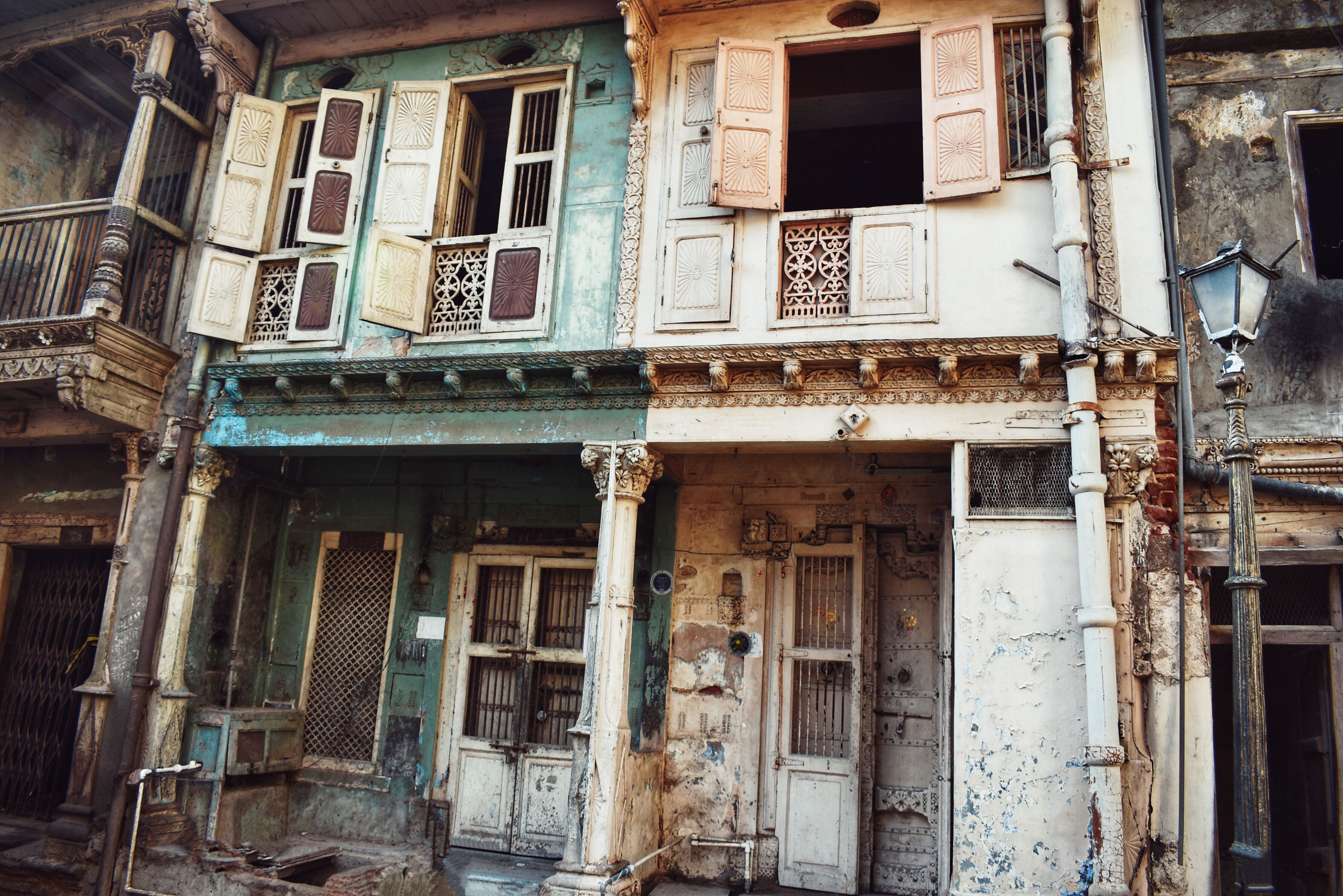 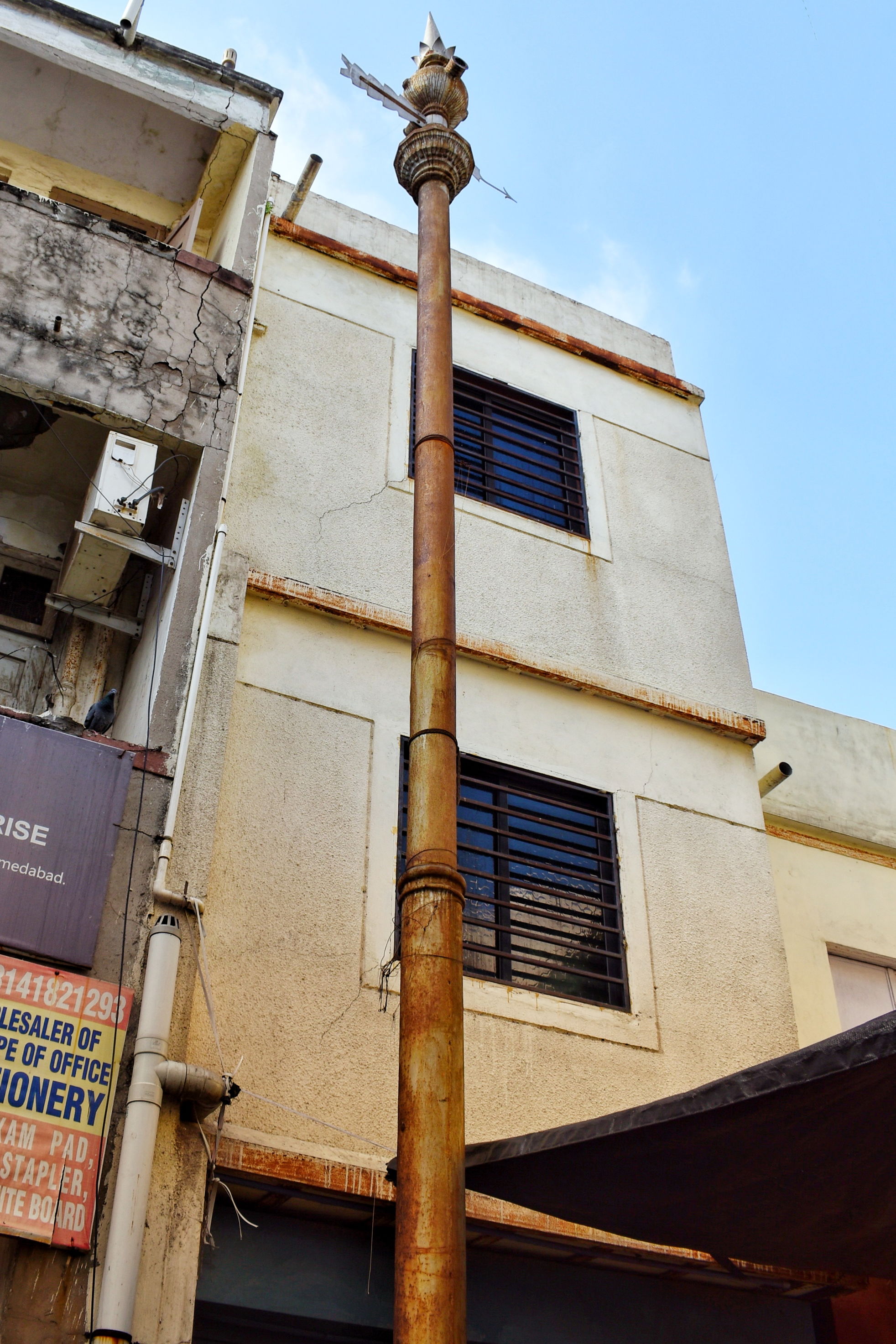 The above image of the pole clearly shows the arrow and vent. This pole serves two purposes. Firstly, it indicates the direction of the underground sewage flow to guide staff during maintenance work. Secondly, it serves as a vent to exhaust carbon monoxide. Interestingly, the poles are very tall and the vent is placed away from the house so as to not inconvenience the residents. Very thoughtful and detailed.

Ever wonder why Sultan Ahmed Shah built a walled city instead of a fort? He built the walled city to protect the people and historical places in Ahmedabad from invaders. At the same time, being a shrewd businessman, he wanted to open access to foreigners for trade. The city had secret escape routes in case of an invasion. The difference was these routes were not secret anymore, confused? Well, the passages were designed to make them look like normal houses or streets to strangers but the locals knew the secret routes. 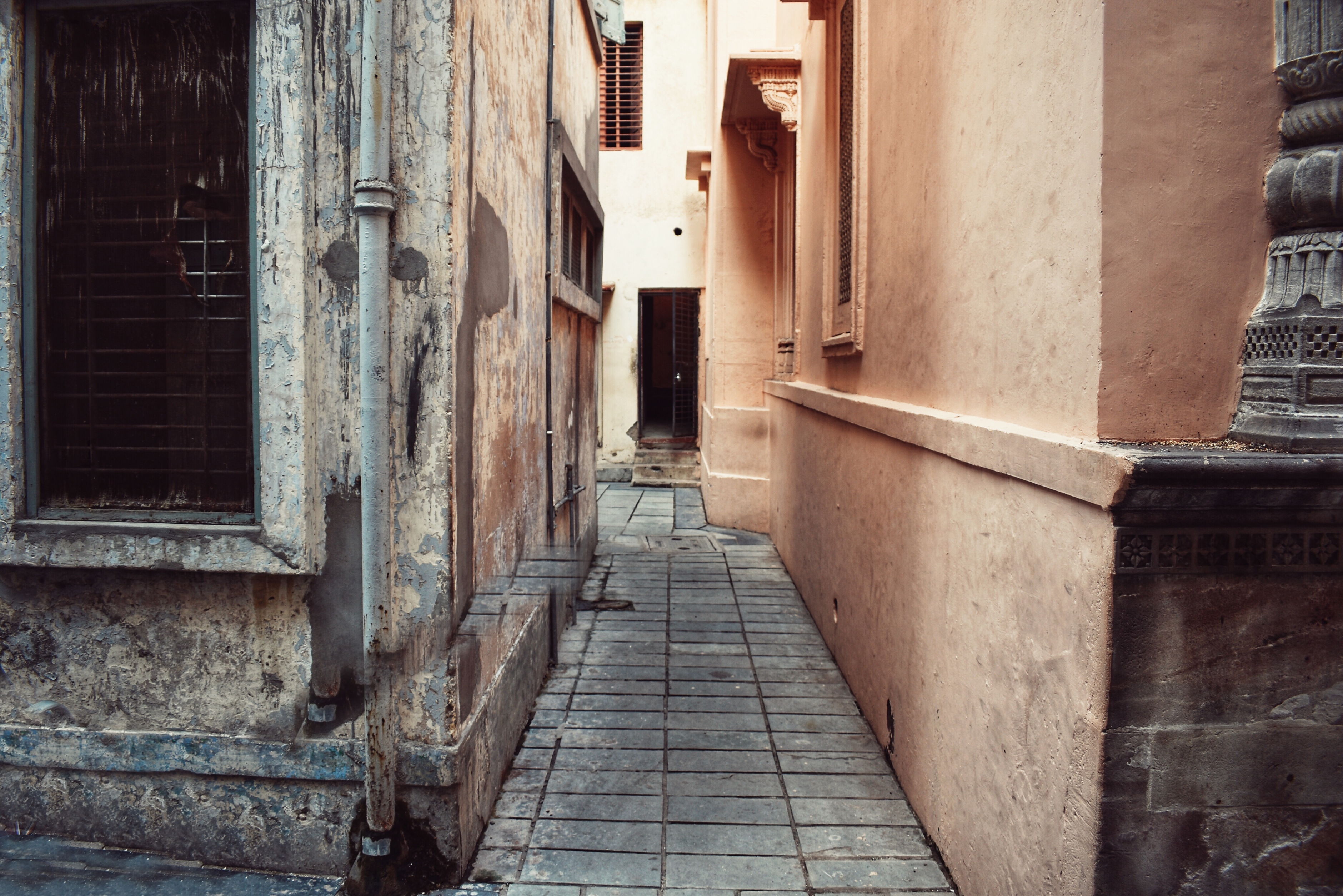 Kala Ramji Temple is a 350-year-old ancient Lord Rama temple located inside a huge haveli (religious mansion). There are only two Lord Rama temples in India where the idol is seated and without Lord Hanuman, this being one of them. It is also the only Lord Rama temple in Gujarat with black stone idol. 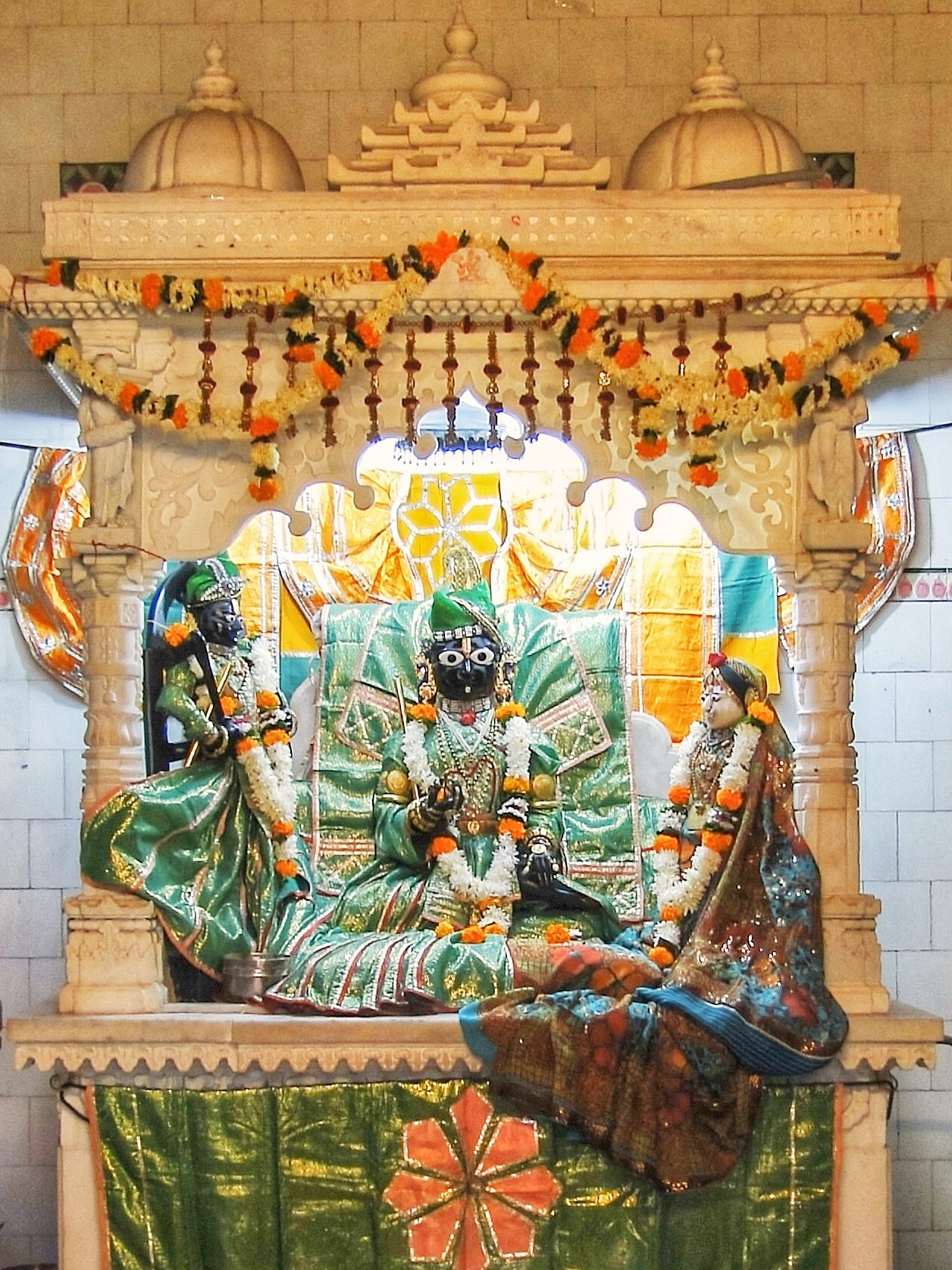 Ahmed Shah was a muslim ruler and hence, the name Ahmedabad. However, the city was not dominated by islamic architecture. The cosmopolitan culture of Ahmedabad Heritage City is evident when you visit Kuvavalo Khancho (the intersection of a well and a passage). This place has 4 homes opposite to each other with distinctive Persian, Maratha, Mughal and Colonial architecture. After more than 100 years, these houses still have the respective original emblems above their doors. 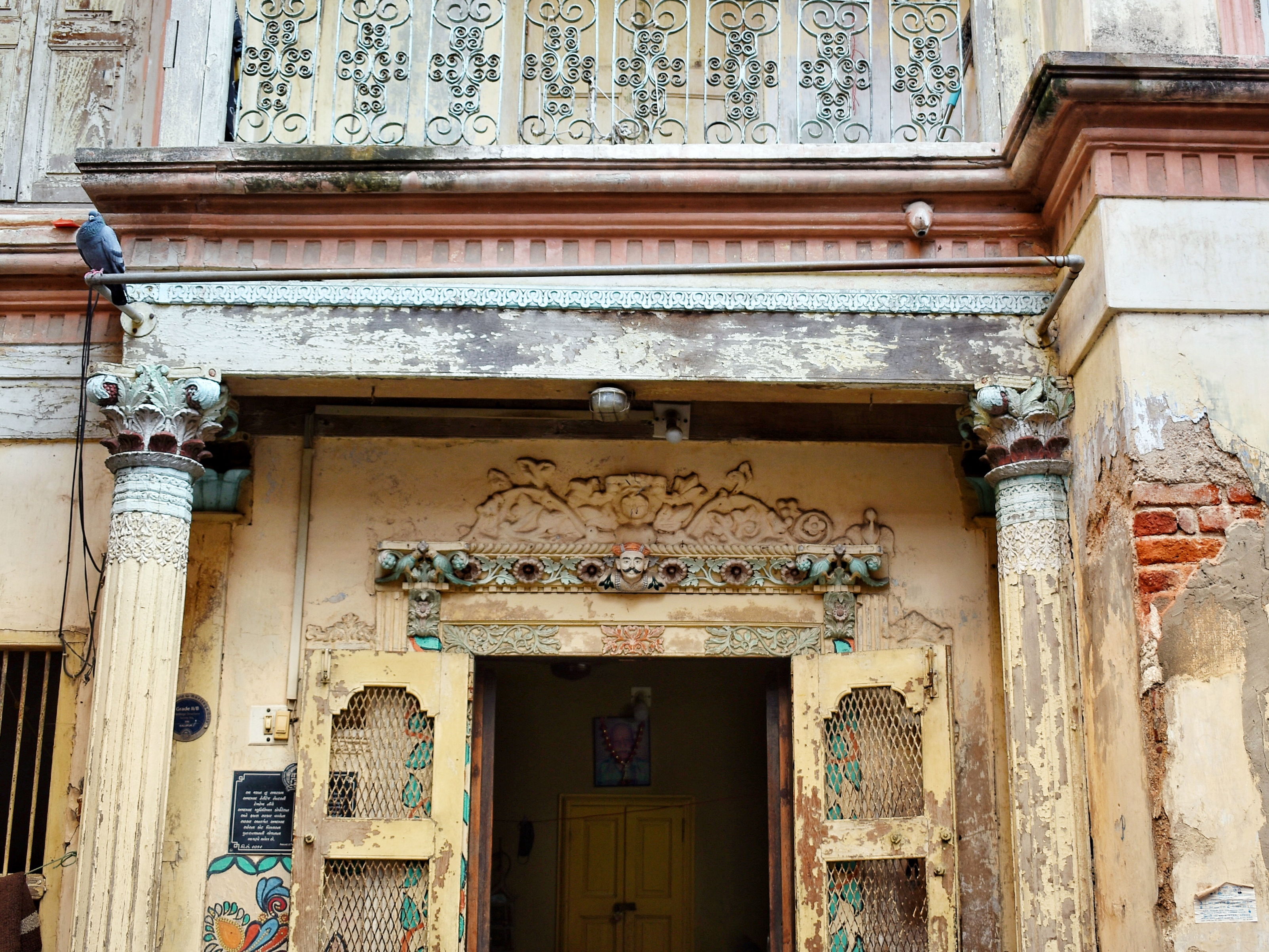 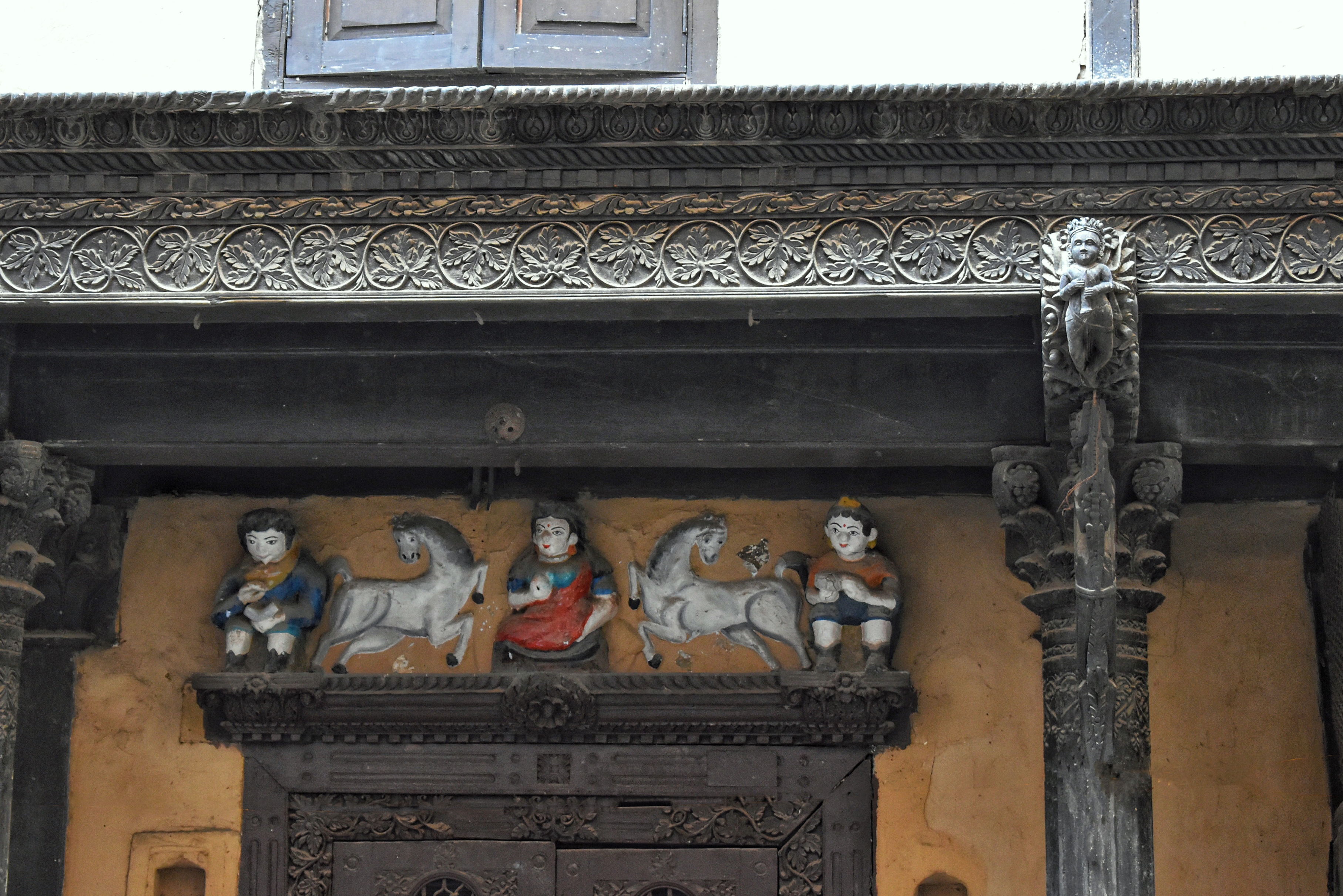 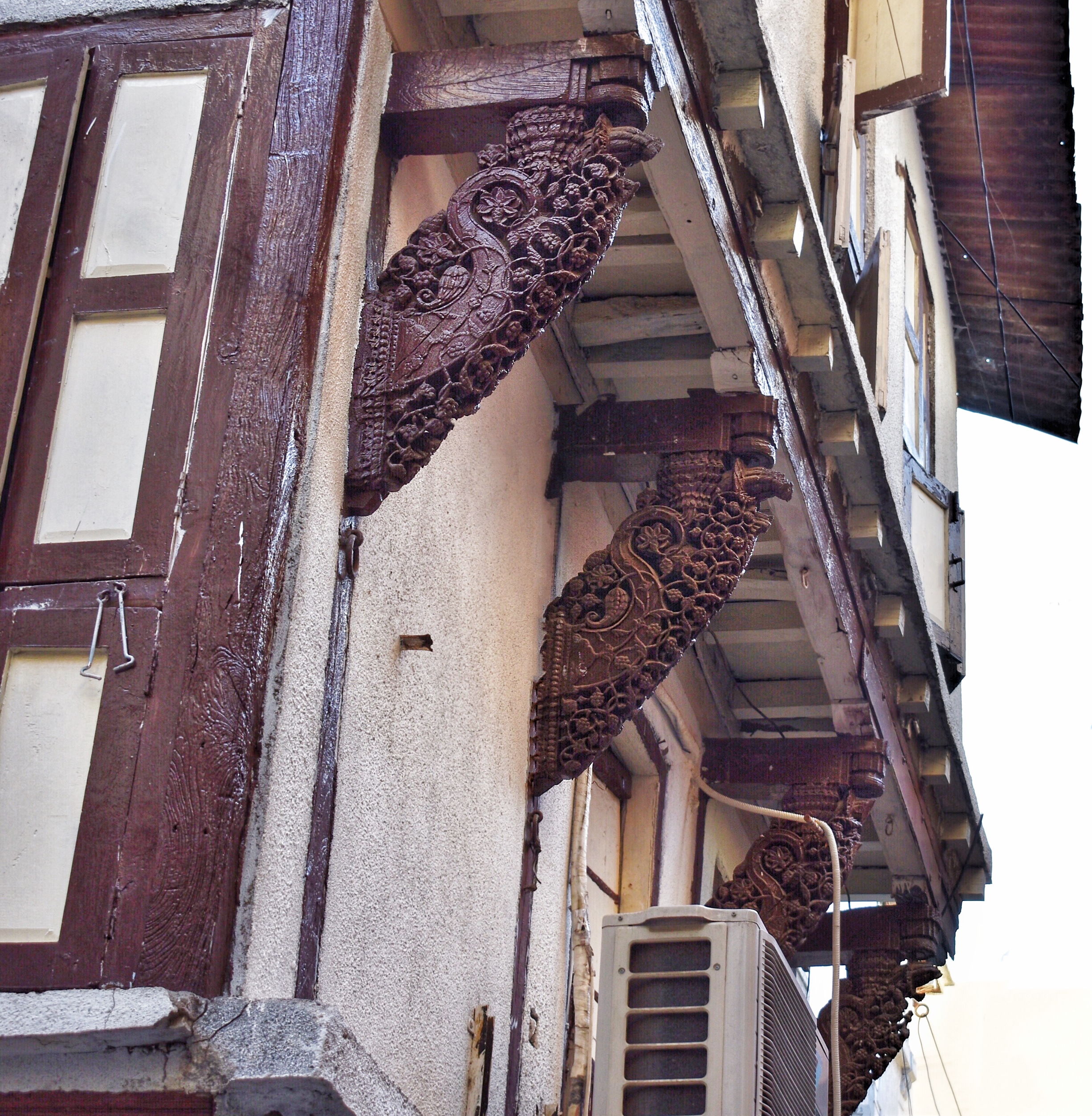 Gujaratis are a kind hearted community with love for all living beings, a common aspect of Jainism. This is seen even in the way their houses are built. They have close-ended holes in their outer walls to provide shelter to Parrots and other birds called "Popatna Gokh" (Parrot holes). 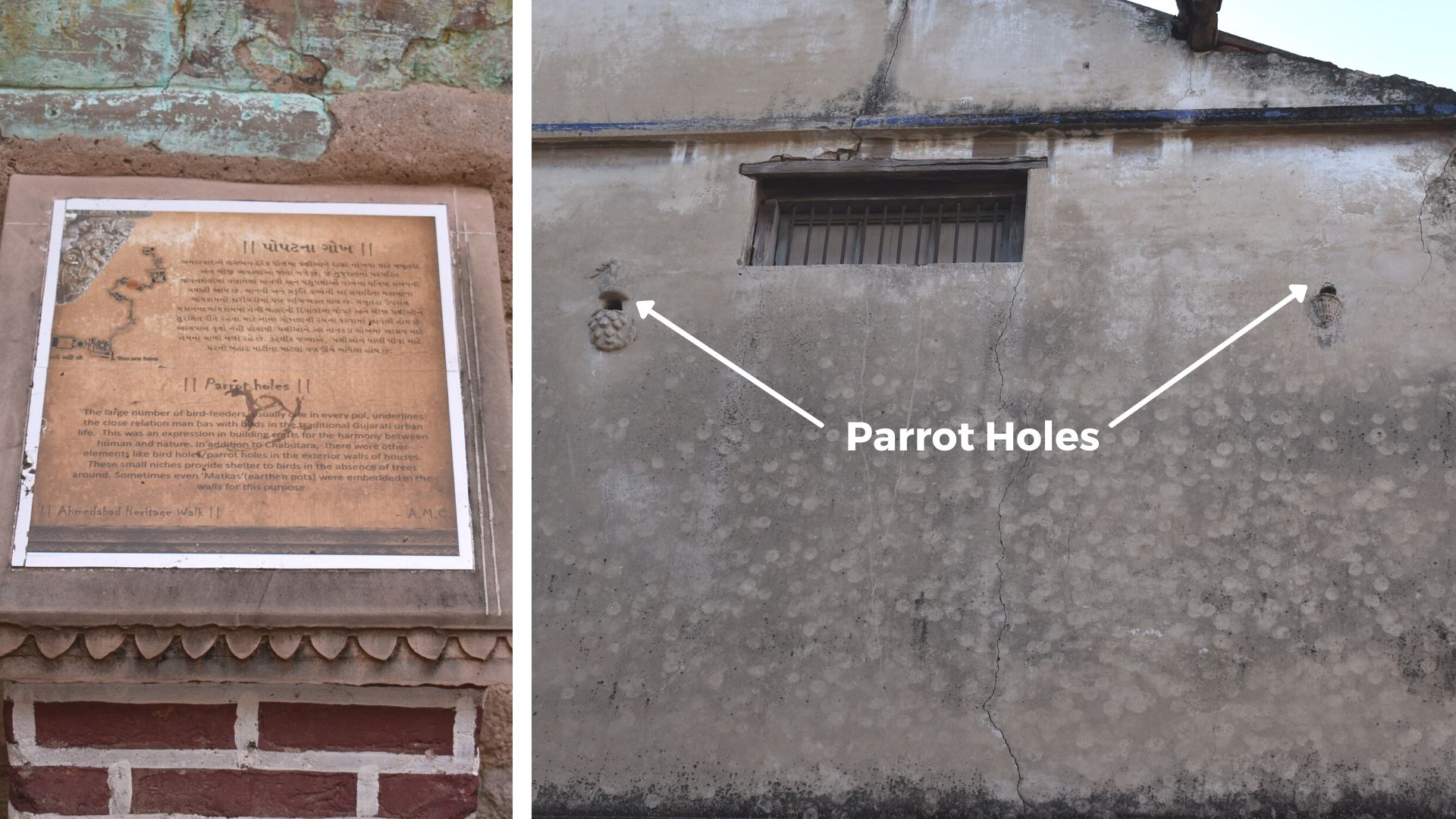 Example of harmony between humans & nature

Overwhelmed by this rich heritage, one would like to stay in the Pols and experience this culture firsthand, right? Well, not to worry, Airbnb has already reached the walled city. Doshiwada ni Pol is famous for its rich traditional havelis (mansions) with intricately decorated facades. 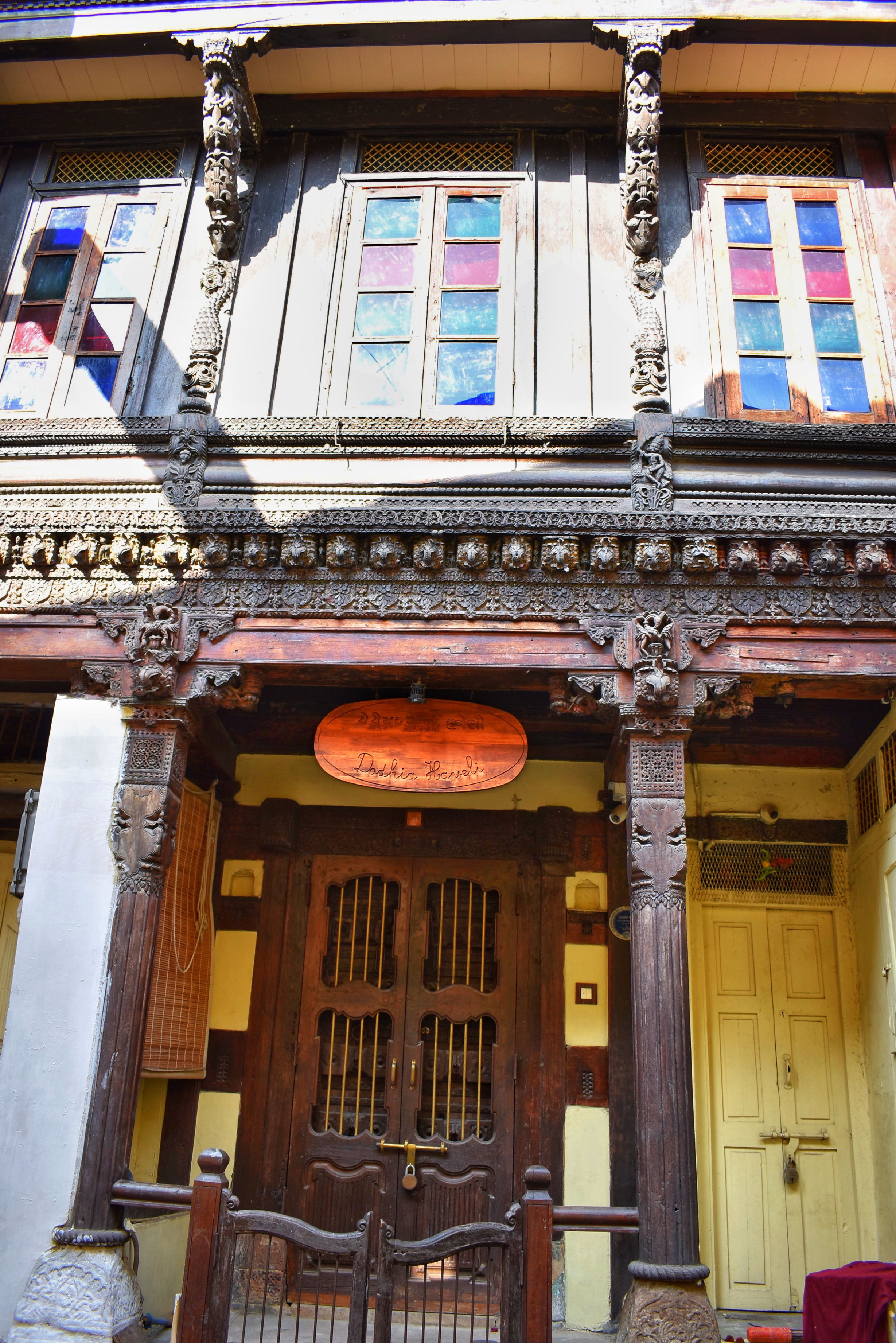 Doshiwada ni Pol houses the goldsmith community comprising wealthy people following Jainism. At the end of this Pol, lies Ashtapadji Mandir, a Jain temple that was built in 1856. This beautifully architected temple has ornate balconies with sculptures of human figures in dancing poses. 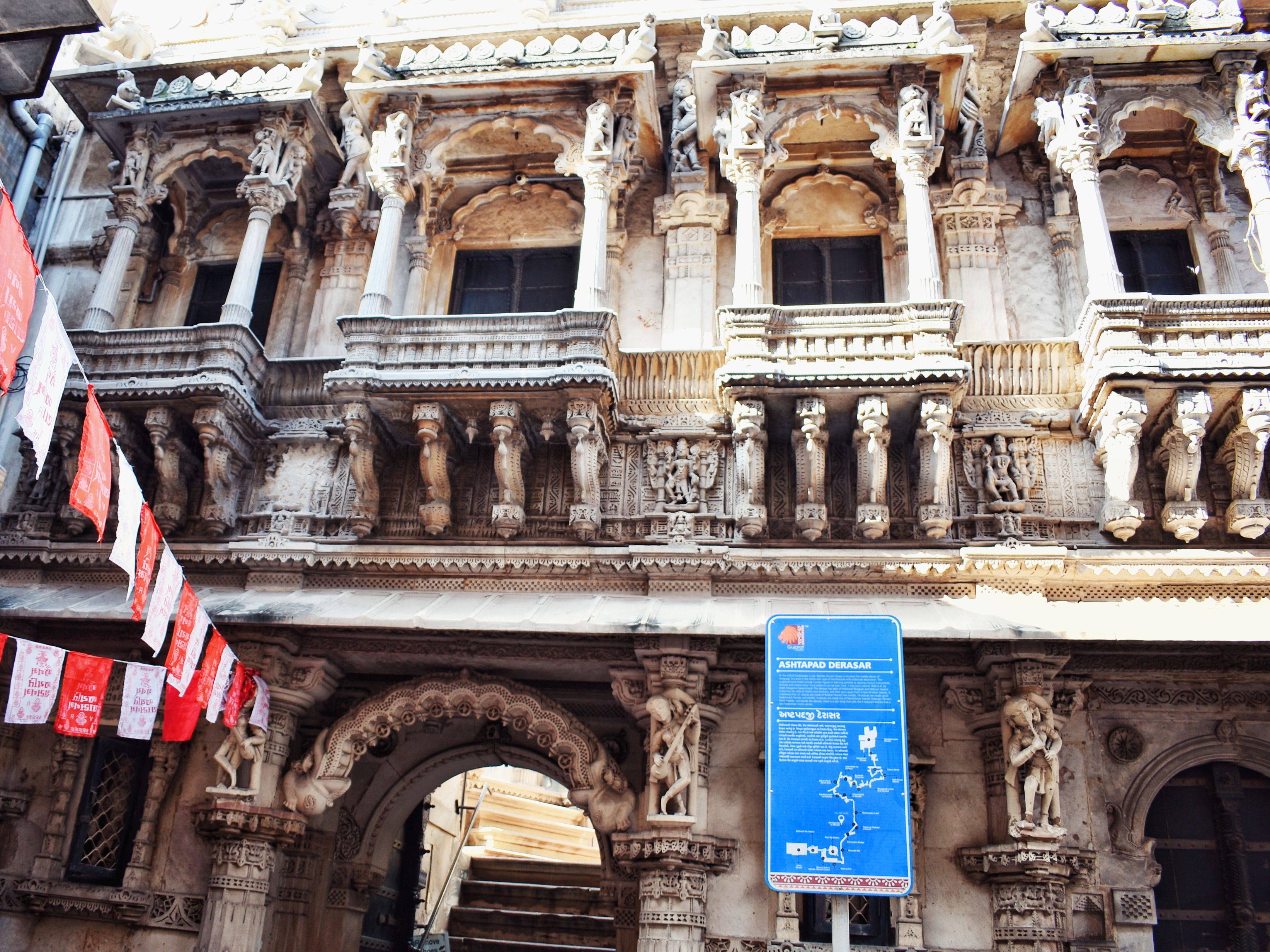 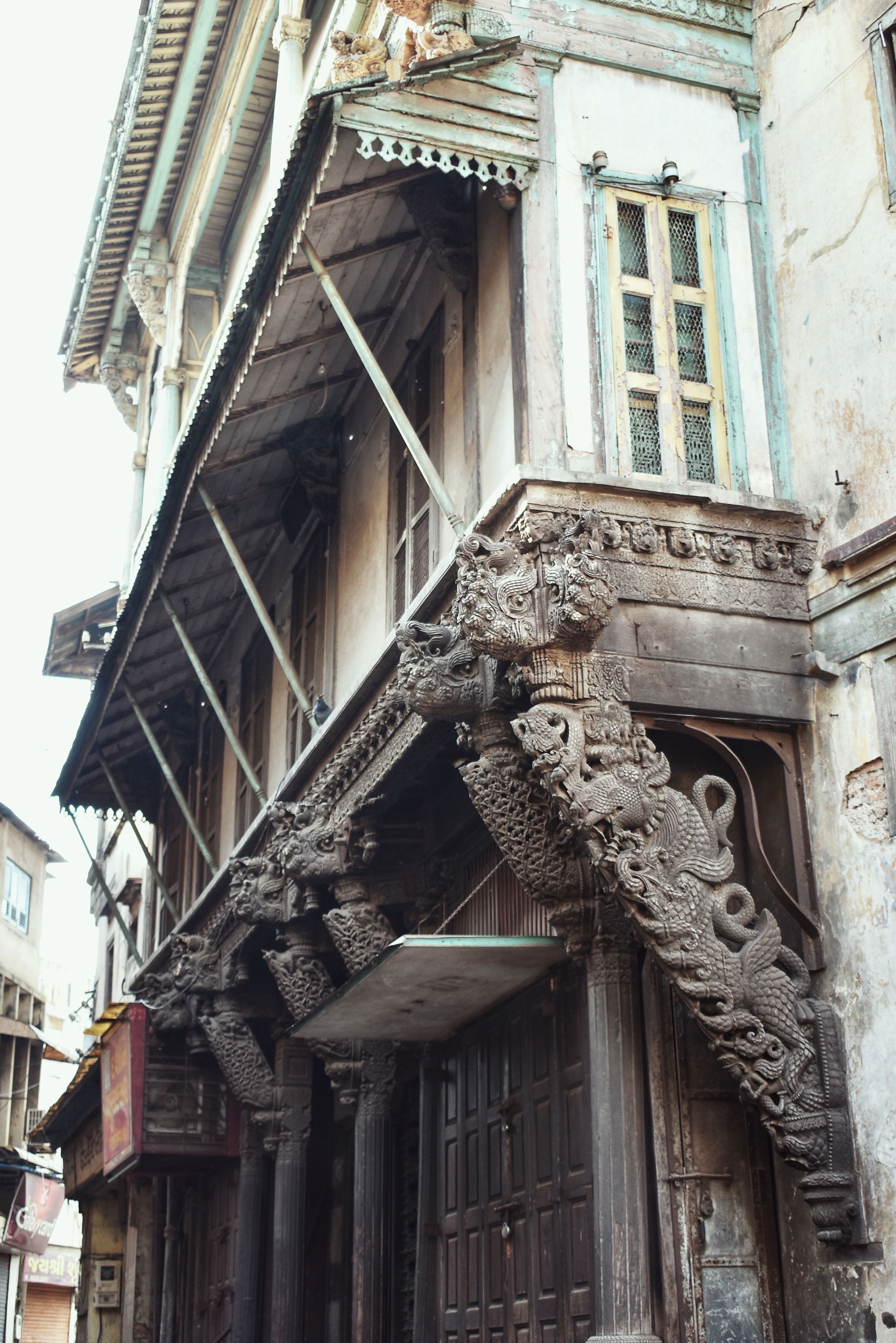 The wooden carvings of Elephant and Dragon

Ahmedabad walled city is divided into 3 sections, residential area, commercial (market) area and OL. The Ol area is where shop owners have their shops and homes in the same building with entry to the home through the shop. 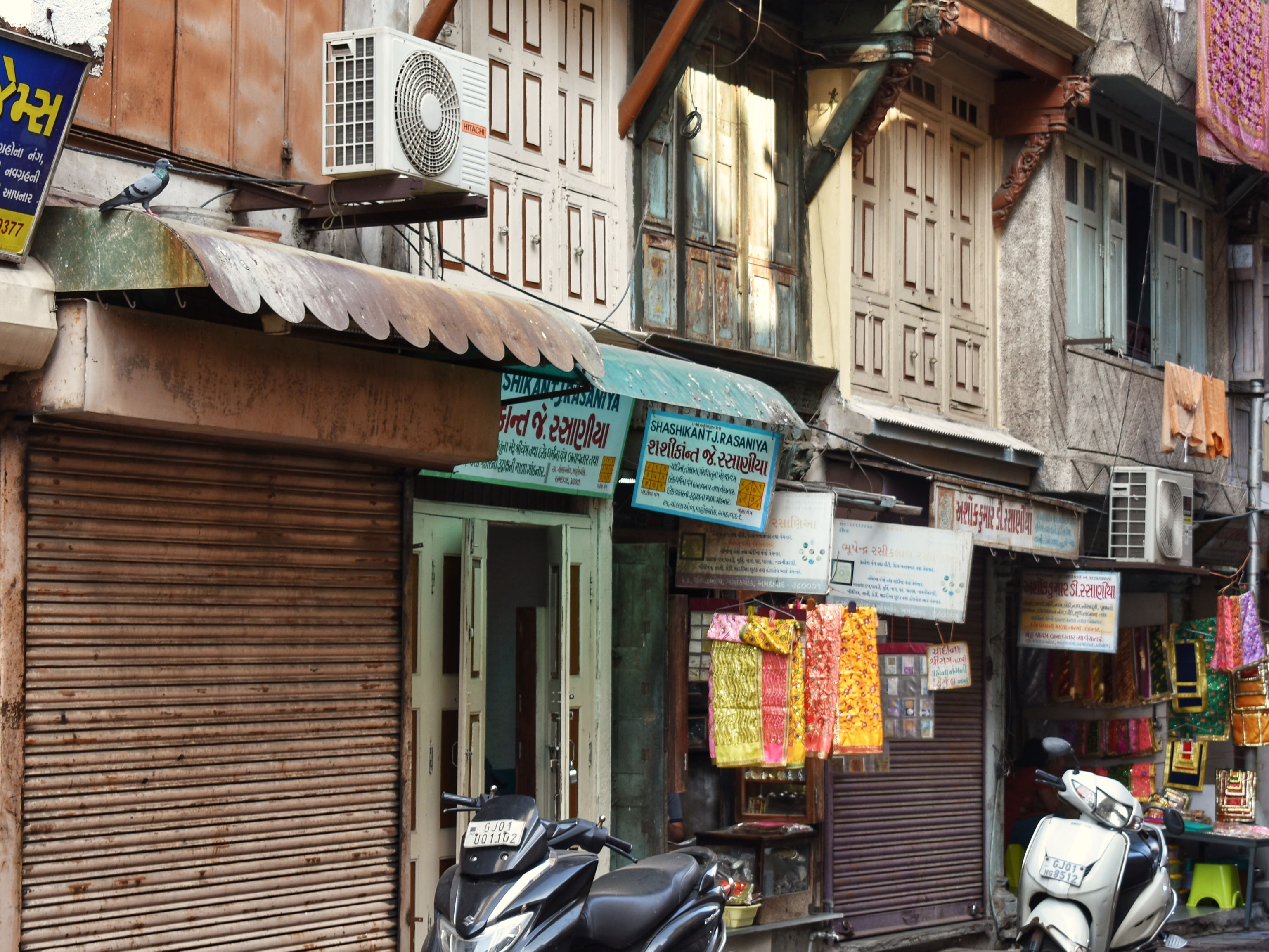 The tour continues to witness exquisite islamic architecture evident in masjids (mosques) as we move to Muslim residential area that houses tombs of royal families and Ahmed Shah, the founder of Ahmedabad now India's first heritage city. These places are known as Badshah No Hajiro (Emperor's Tomb) and Rani No Hajiro (Queen's Tomb). 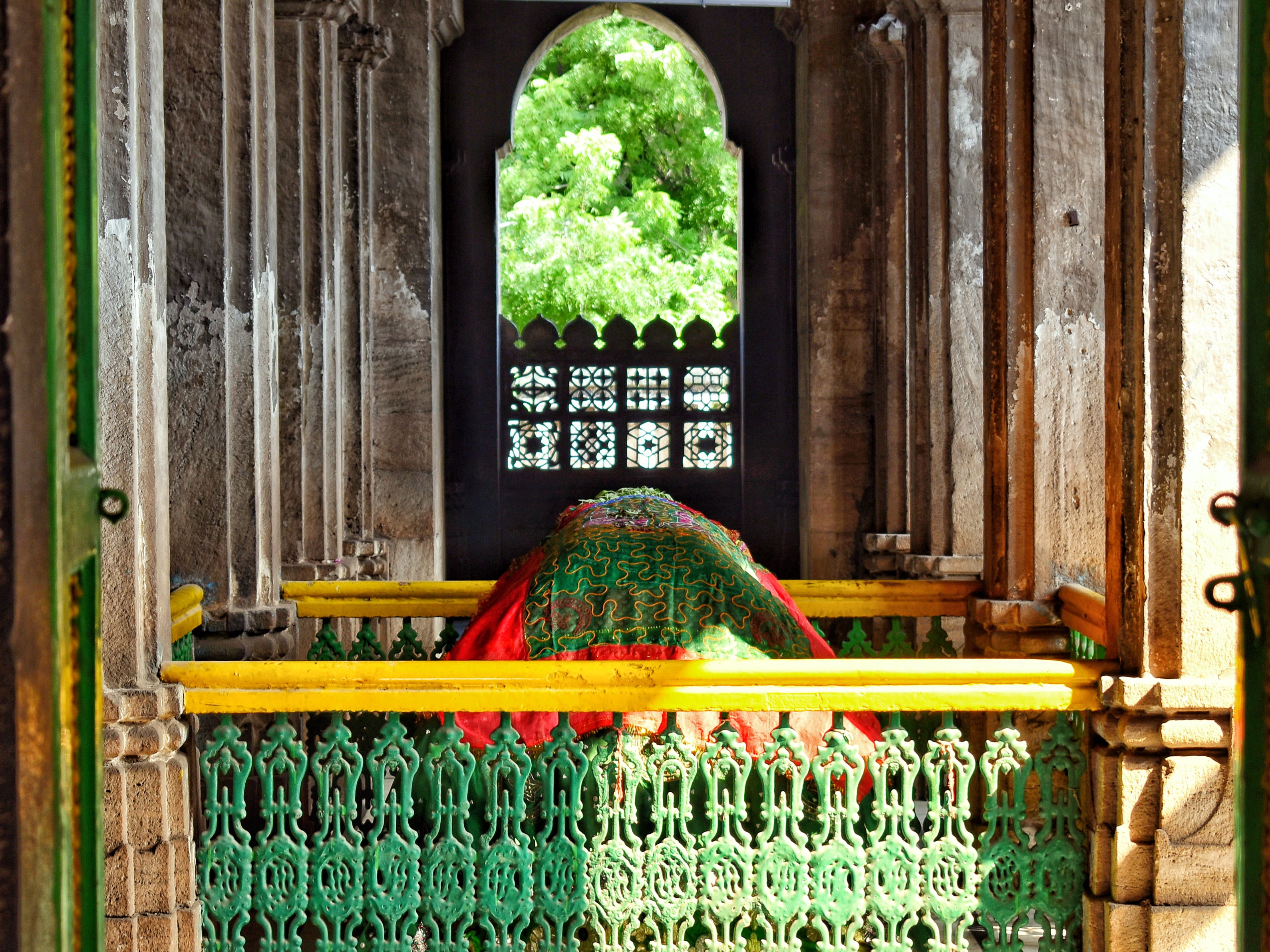 For centuries, Gujaratis are known for their entrepreneurial skills and business acumen. Ahmedabad is famous for the Ahmedabad Stock Exchange within the walled city, which was established more than 100 years ago. 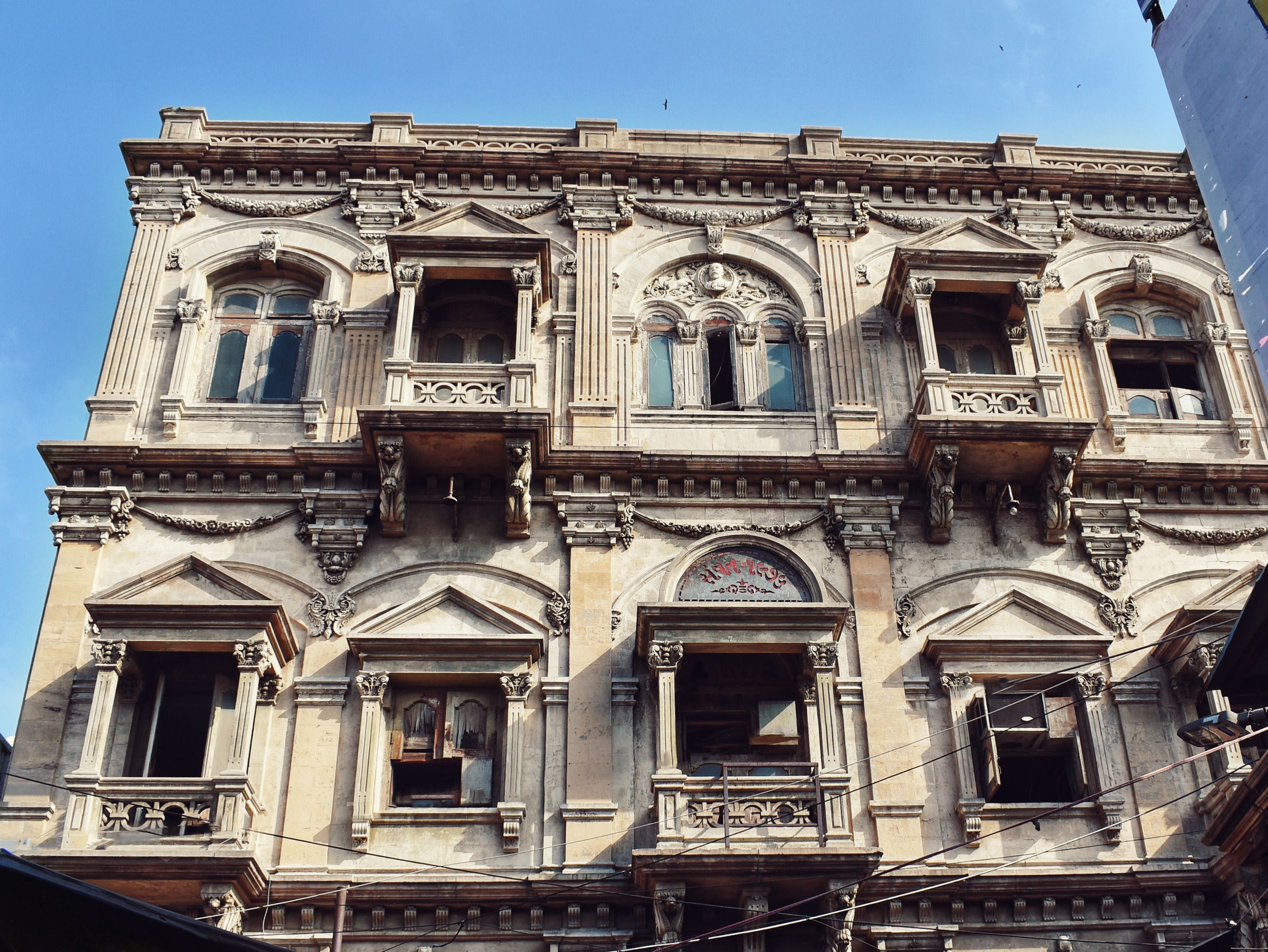 While trading in stocks, Gujaratis believe in "Mahurat" (auspicious moment) trade to start their trading activities. Hence, the Stock Exchange was built exactly opposite the "Mahurat Pol", the first Pol in Ahmedabad Heritage City. 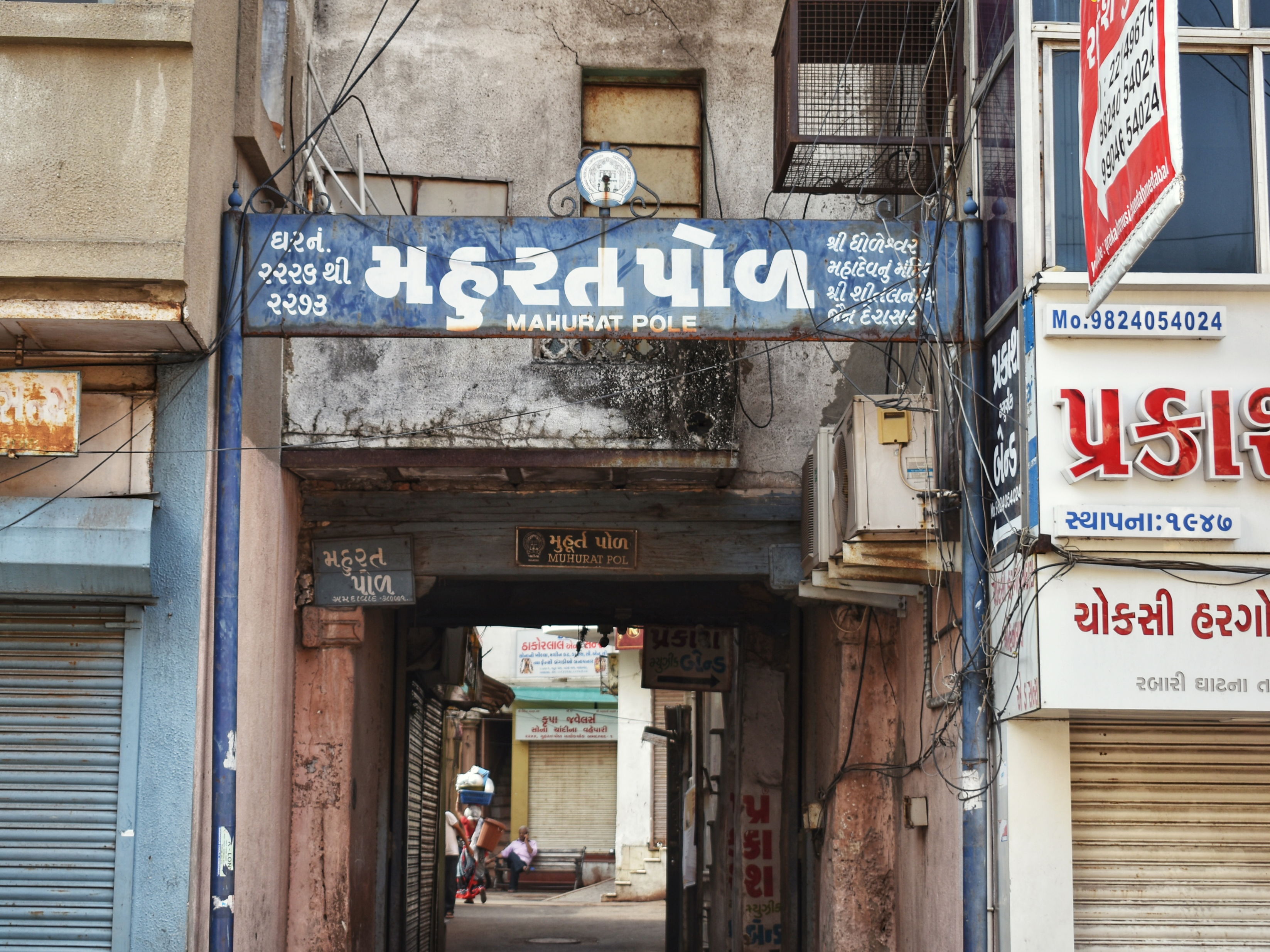 Mahurat Pol was founded in 1460

This chawk is the epicenter of the walled city be it day or night, for different reasons. It is named after Saint Maneknath, the then advisor of Sultan Ahmed Shah, a key figure in the development of Ahmedabad Heritage City. From a vegetable market in the morning, a bullion market in the daytime and a vibrant street food hotspot for almost the entire night, Manek Chawk is multifaceted. 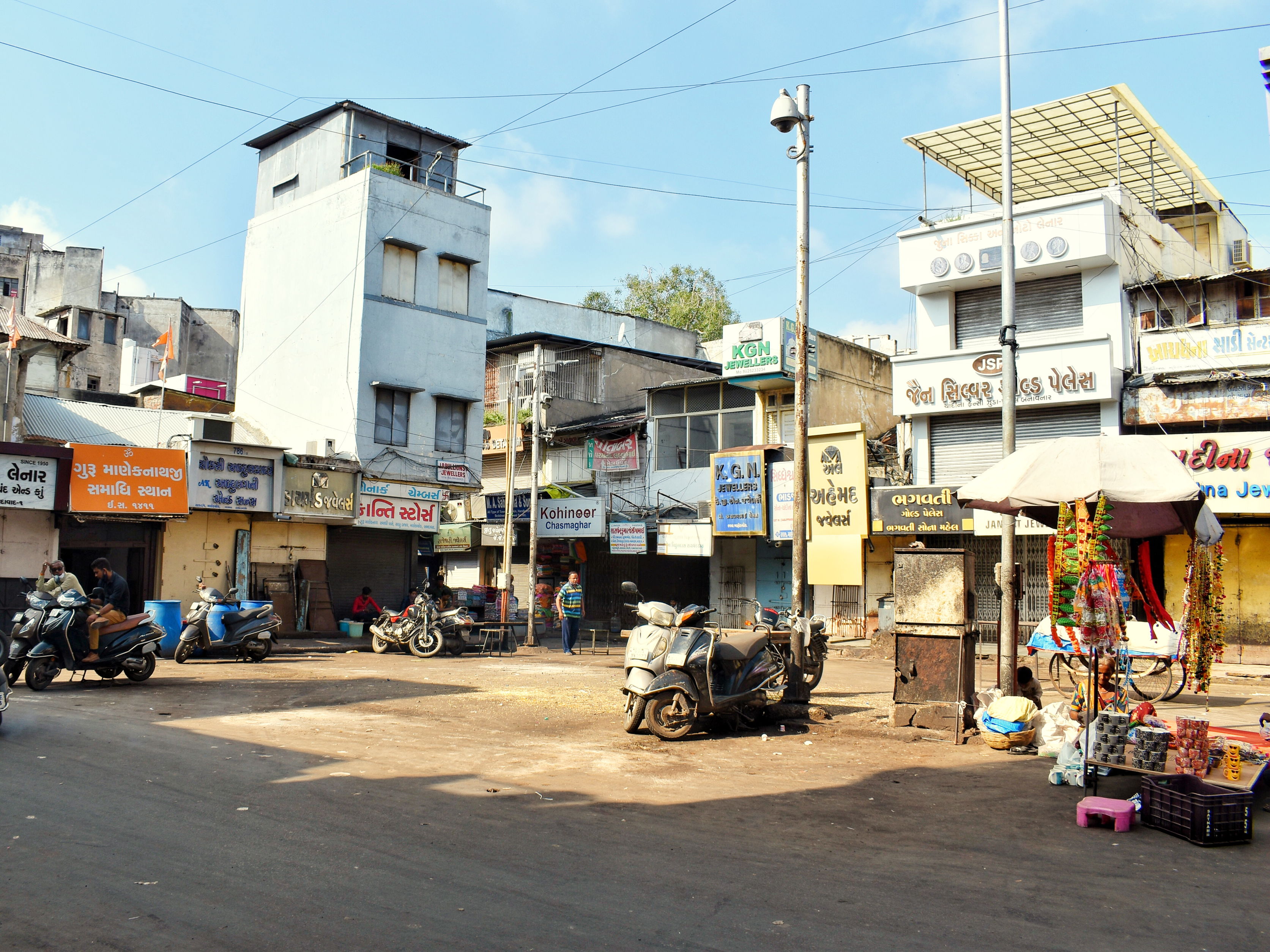 Our heritage walk ended at a famous masjid (mosque), Jami Masjid. Built in 1424, it is believed to be the largest mosque built in India in the 15th century. The sprawling campus has 4 entrance gates, each having a different name inscribed, Jami Masjid, Jamma Masjid, Jumma Masjid. 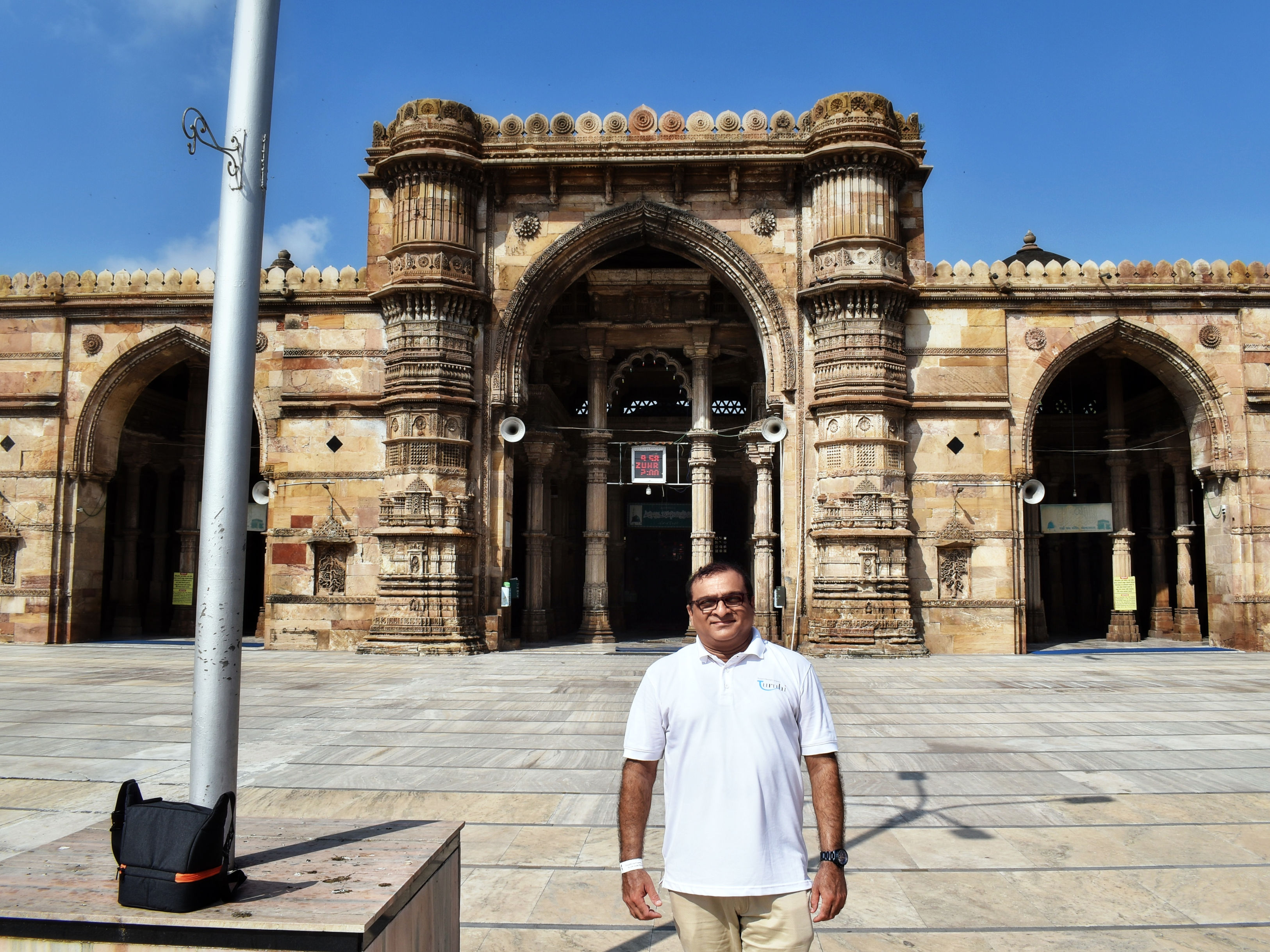 Entry of women into mosques is rare, even today. Jama Masjid was an exception even 500 years ago. Mulak Khana, a dedicated place where women can pray while maintaining their privacy is evidence of this. 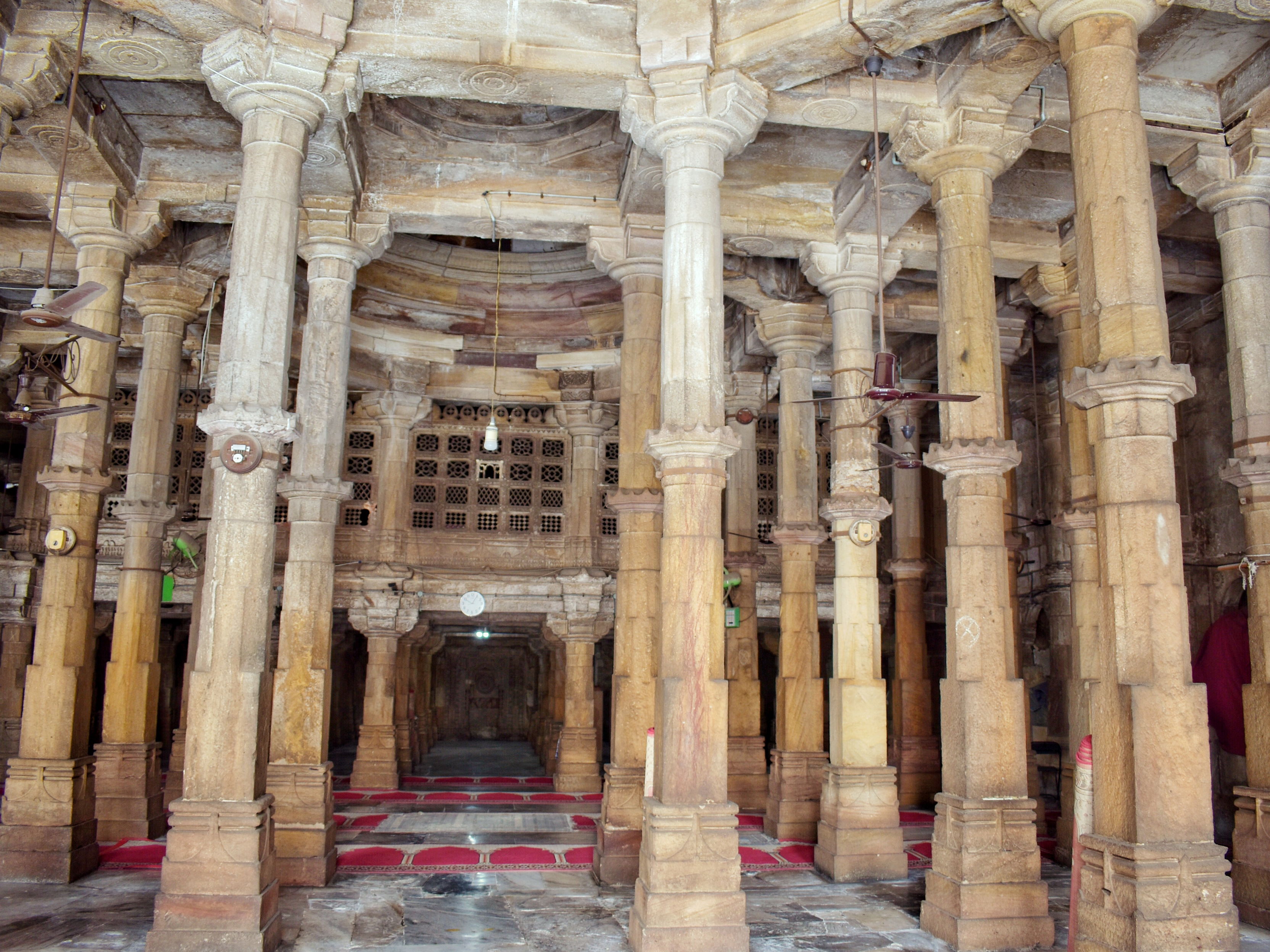 The striking aspect of this place is its architecture, a blend of Gujarati and Islamic styles. Many motifs of Hindu and Jain temple architecture are carved in the main pillars. 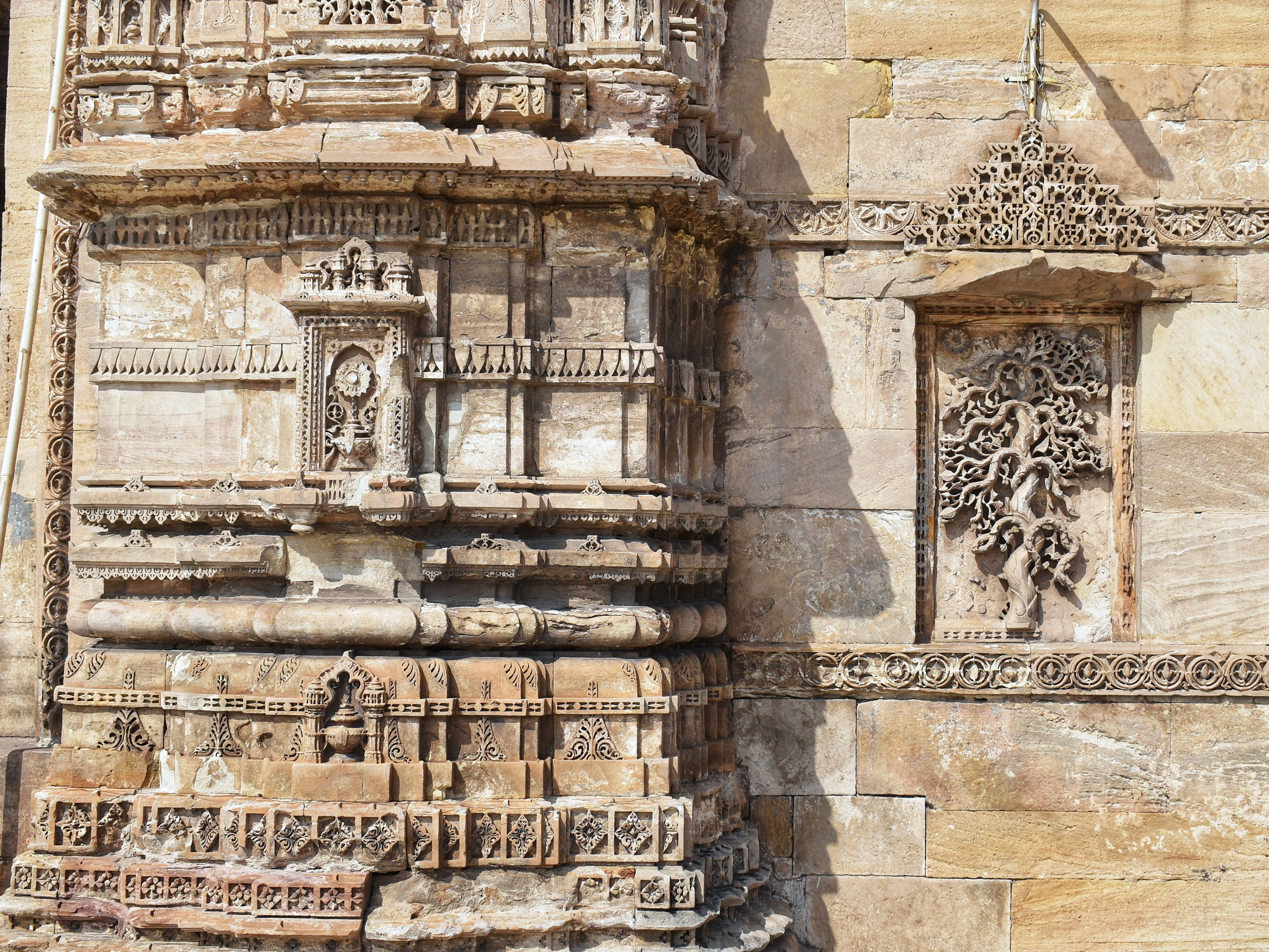 Takeaway from an enriching Heritage Walk

A truly enlightening journey, this heritage walk at the UNESCO World Heritage City in India takes one down memory lane to an era where the neighborhoods of Ahmedabad, were socio-culturally homogeneous. An age bygone when unity in diversity was tangible and living. A culture and heritage that we are proud of.

Ahmedabad is hot & humid for more than 6 months with summer being quite harsh (touching 45 degrees celsius). November to February is the best time to visit. Old city remains slightly cool in the morning as wind blows over the river from west to east.

The walled city of Ahmedabad is known for its heritage and ancient architecture. The heritage walk is the best way to explore and turn the clock back in time.

If you visit the walled city and do not eat at Manek Chowk at night, your trip is incomplete. One can eat exotic and mouth watering Gujarati cuisine like dhokla, gathiya, pav bhaji, dal vada, dabeli, bhakhri pizza, etc.

People of Ahmedabad take pride in the city being extremely safe anytime of day. Women can walk freely even at midnight in any part of the city. The city is actually buzzing between dusk and dawn.

The heritage walk is quite an offbeat activity which many locals are also unaware of., I was no exception either until I did the activity.

It is mandatory to cover your shoulders, chest and legs below the knees and remove your footwear when you enter any of the religious places in Ahmedabad including the heritage walk. Removing footwear will happen 8-10 times during the 2-hour walk.