The Resilient City of West Africa

Dakar, with an age-old rich colonial heritage and located in Cape Verde Peninsula at Africa’s most westerly point is the enchanting gateway to Senegal. This vibrant city is full of colors, beaches, nightlife, history and unique art & culture has a lot to offer to intrepid travelers. The capital of Senegal with a population of over 3 million was once a major regional port of the French Colonial Empire. The international airport of Dakar is well connected with Europe and many major airlines fly there directly. I happened to visit Dakar on several occasions on my way to various parts of West Africa. Each time I got the opportunity to spend a few days in the city to explore its rich heritage and culture. I have traveled to many former French Colonies in Africa but have never felt safe and comfortable like in Dakar. It is one of the few well-developed cities in West Africa with wide roads, bridges, underpasses, clean beaches, open-air public gyms, well-managed traffic and friendly people. I was highly impressed with the city on my first visit itself. Unbelievable that the country went through a three-decade long civil war just six years ago. A smooth drive from the airport to city center gave me a preview of what to expect in the next few days.

Onlanding at the airport, I spotted a huge statue that got me curious. Exploring, we reached Mamelles, which are the twin hills in Dakar. On one of these hills stood a 52-meter high statue of The African Renaissance Monument (Le Monument de la Renaissance Africaine), which is what I saw from the airport. The tallest bronze statue in Africa is stationed 100 meters high, designed by the Senegalese architect Pierre Goudiaby and built by a North Korean company. It was unveiled on 4th April 2010 to commemorate the 50th anniversary of Independence from France. Believed to be taller than the Statue of Liberty and Christ the Redeemer, The African Renaissance Monument has a man, woman and child looking out at the Atlantic Ocean. The statue is well lit after the sunset and is a site not to be missed. 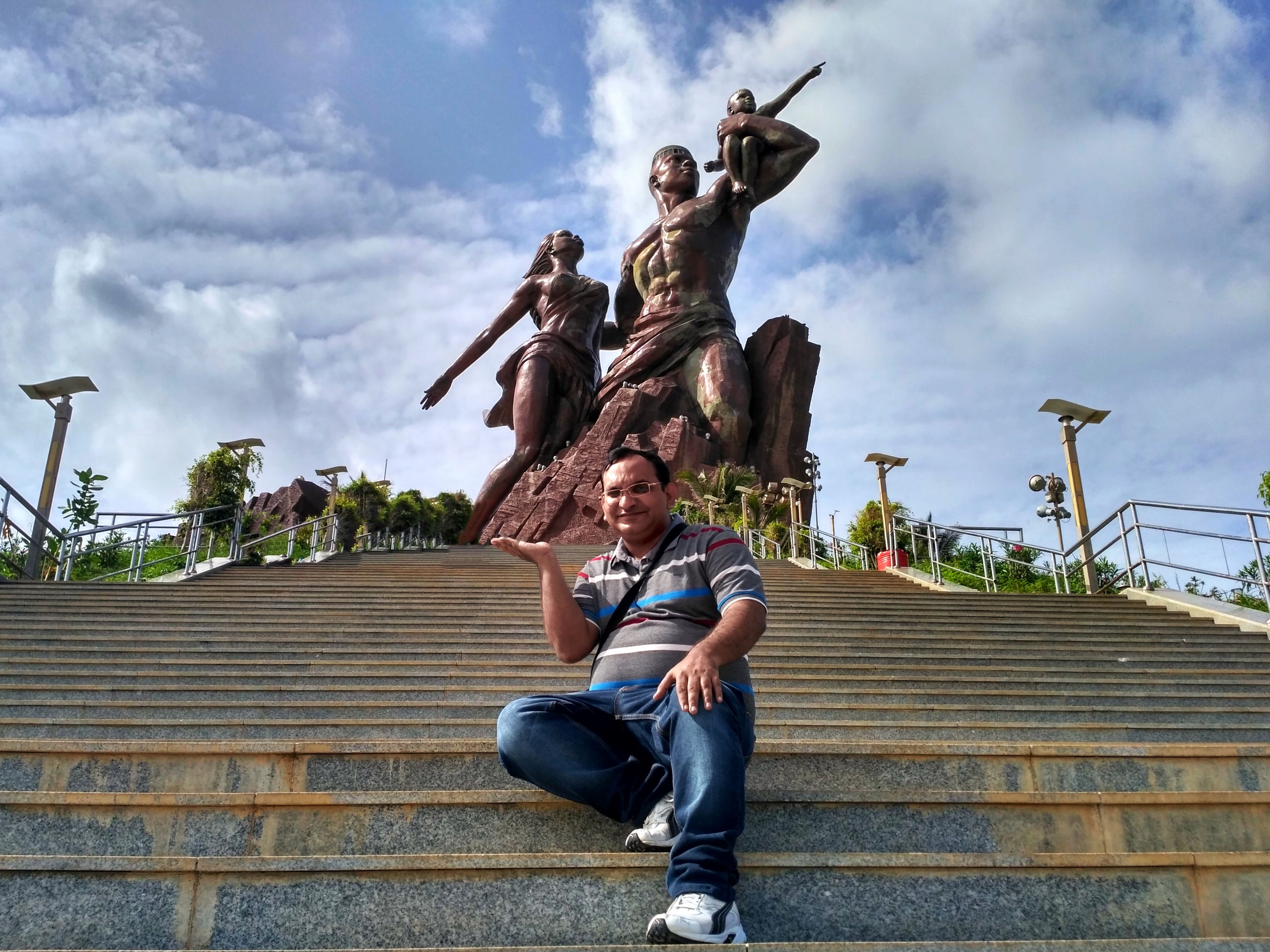 The African Renaissance Monument: The child points ahead in anticipation of a glorious future, while the woman extends her arm behind to acknowledge the troubled past.

The entry to the base is free and you can walk around and take pictures. However, there is a fee to take an elevator ride to the crown of the male and view the museum (includes a guide). The view from the top is breathtakingly beautiful. As you descend, you come across the museum and viewing gallery for a glimpse of African culture with a variety of statues, arts and crafts influenced by famous personalities including Mahatma Gandhi, Nelson Mandela and Martin Luther King. Dakar is very hot during the afternoon. The statue is well lit in the late evening so plan your visit accordingly. 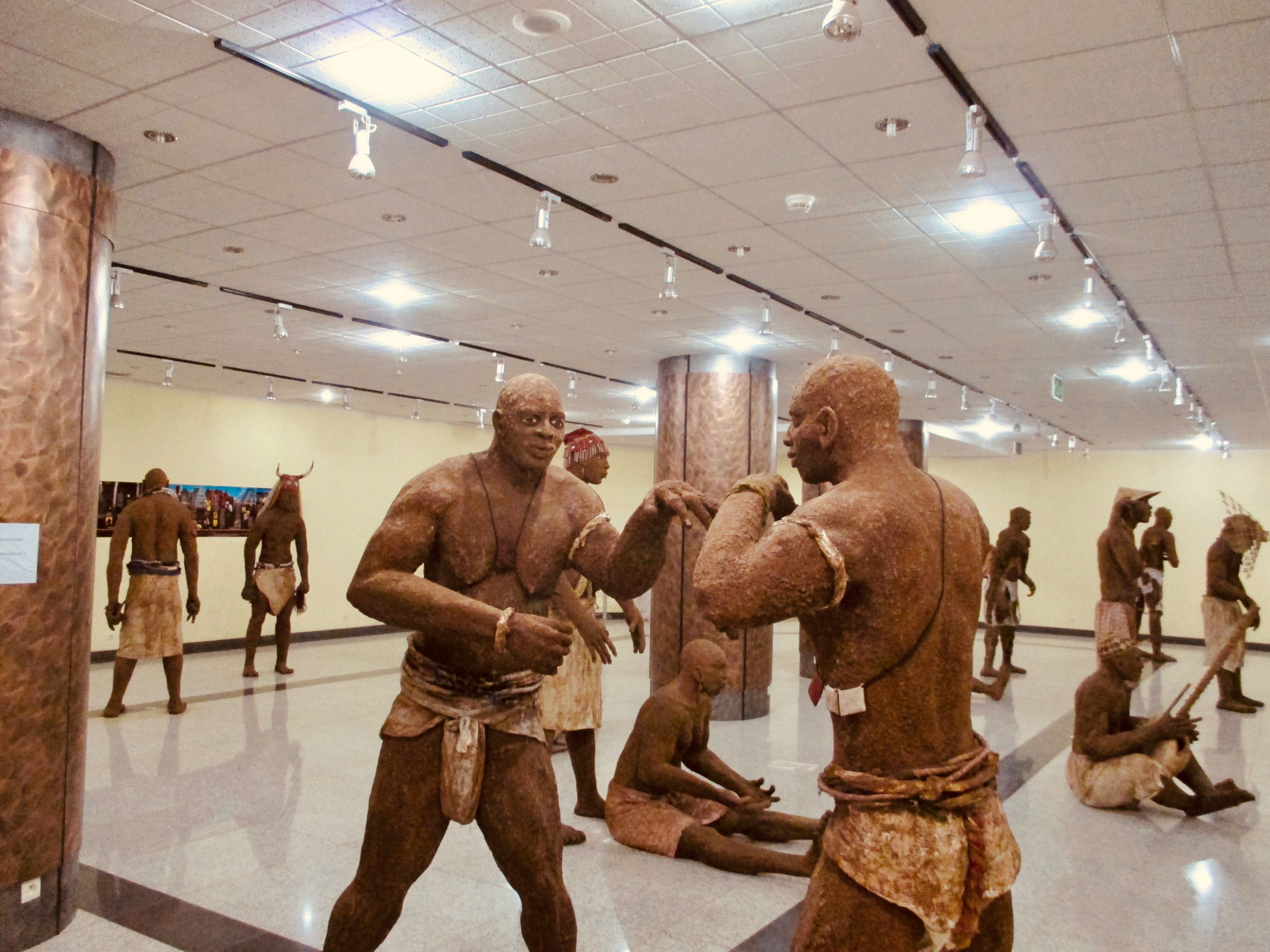 The other hill houses the Les Mamelles Lighthouse, considered to be "one of the world's great lighthouses, guiding ships around the western tip of Africa". It was built in 1864 and initially fueled by oil and remains manned. It is open to public viewing with a guided tour. A 16 meter cylindrical tower has a machine room with generator and a watch room on the top accessed by spiral staircase. A 1000-watt halogen lamp produces a flash every five seconds and reaches a range of 31 nautical miles. The lantern gallery offers a panoramic view including African Renaissance Monument. 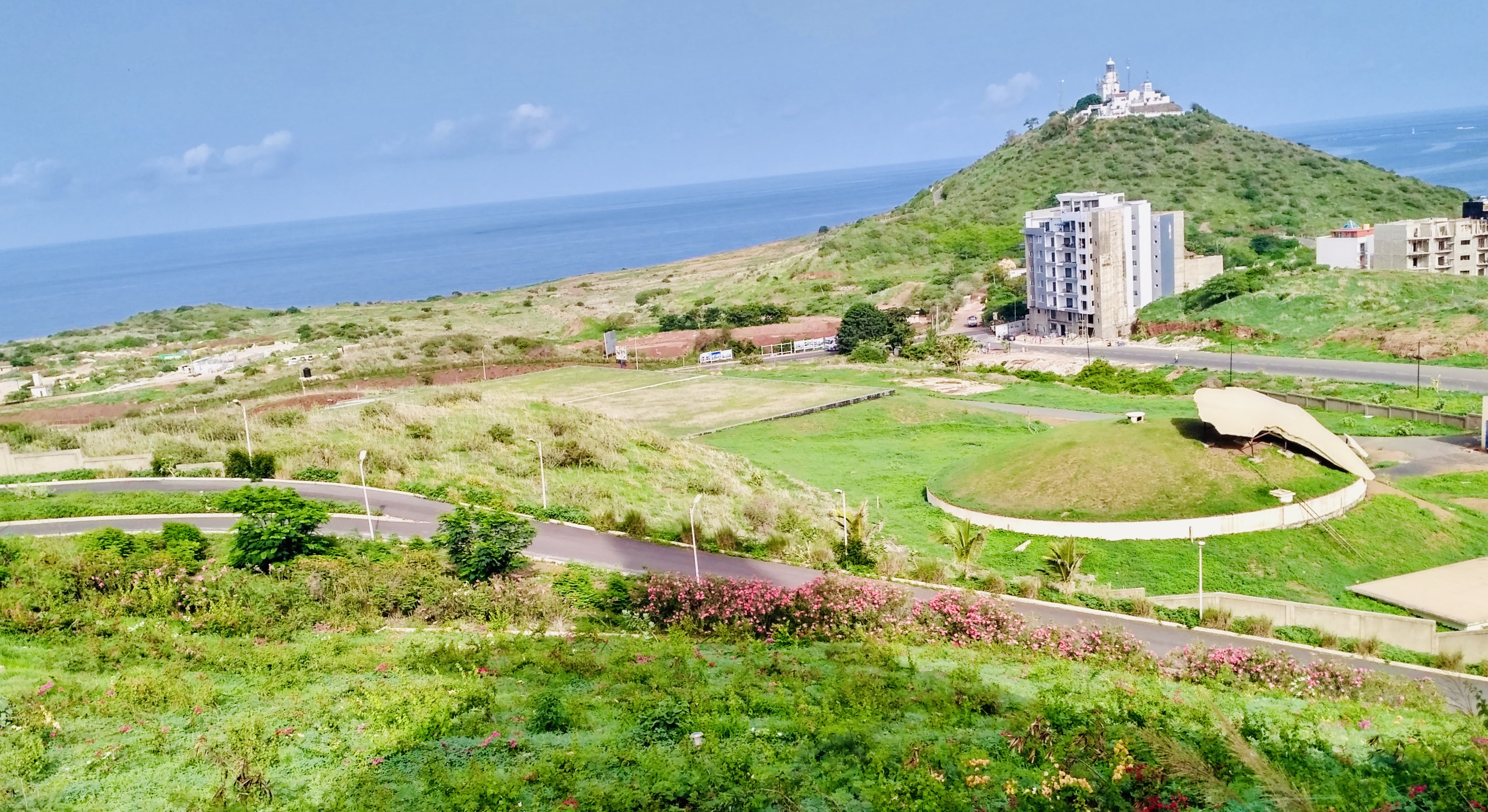 The city has plenty to offer and I discovered many new things during each visit. A walk down the city center is a must if you can brave the heat and mild traffic. The beauty of the city shines through its people and their vivaciousness. There is artistic talent galore with artists selling their work along the roadside and each unique. A visit to their crowded markets gives you a taste of their day-to-day life and struggle to make ends meet. Once I chose a hotel for my stay right in the middle of the wholesale market Marche Sandaga. I had to navigate the chaotic, narrow, crowded lanes full of vendors selling vegetables, fruits, spices and seafood. At times the streets are completely blocked with loading/unloading vehicles and one must slip and slide through tiny passages behind the truck. You will encounter vendors trying to persuade you to buy their merchandise as you walk along. If not interested, a "SMILE" with a gentle "NO" is enough to indicate your desire. The noise, vehicles, vendors, smells and muck, its all an experience. Currency exchanging options are plenty with attractive rates, at least 5-10% higher than the standard bank rate. 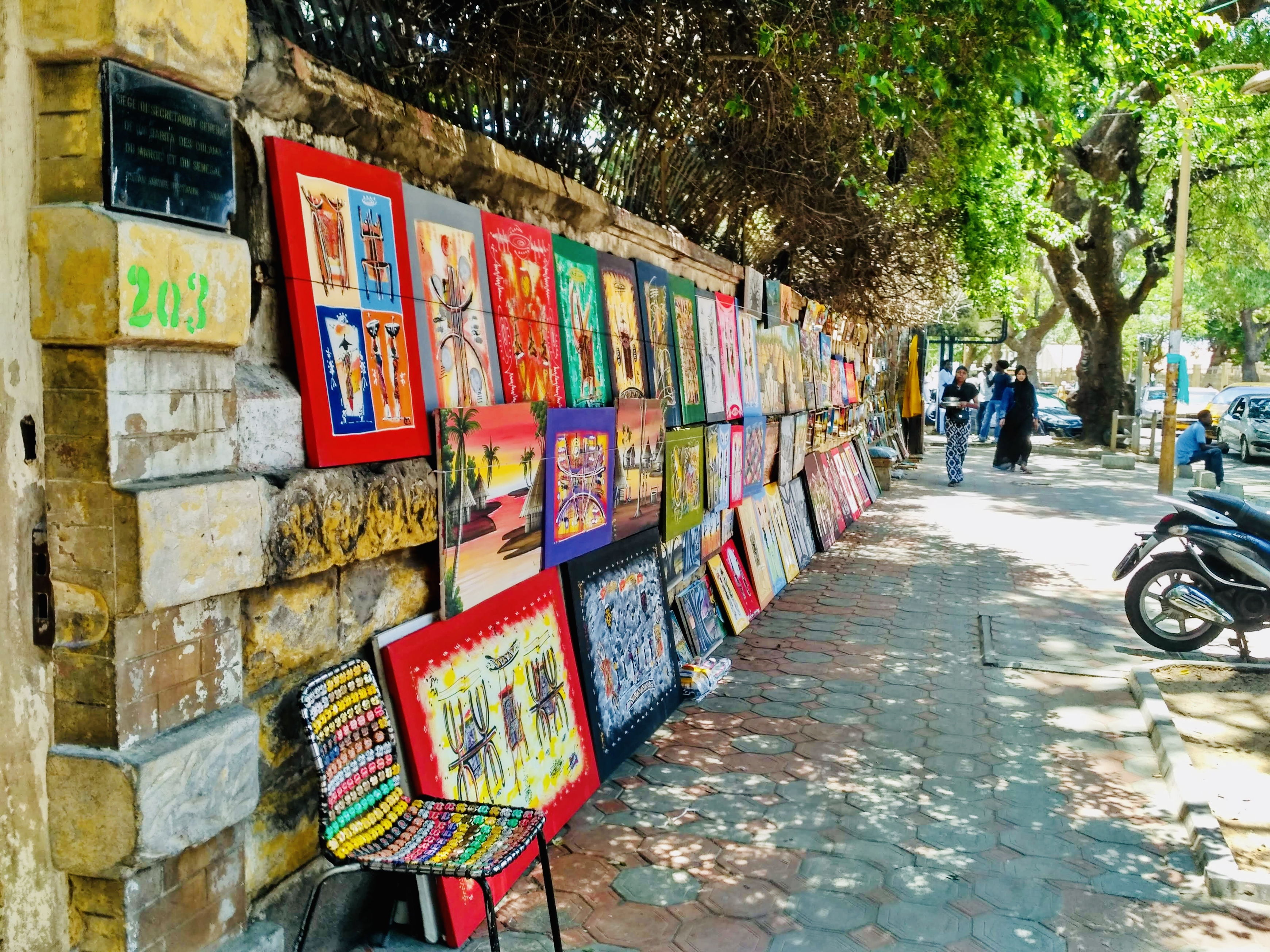 Street side paintings gallery, one can buy colorful paintings at a reasonable price.

I have spent a full day freely strolling through these narrow lanes and markets intrigued with their culture and habits. There are vagrants who look for foreigners and seek help, at least a few leftover coins, but are never threatening. As a numismatist, I have special interest in these people because their bowls are full of coins. I exchange coins that I am interested in for bigger change, may be 4 times the value. It is a win-win situation for both of us considering I would have to spend a fortune to purchase it from an online dealer. Africans are jolly and optimistic. A smile makes a significant difference while interacting with them and it is one of my secrets to enjoying and navigating my way in Africa over the past 7 years. Music is a vital part of their everyday life.

In Dakar, markets are everywhere from open-air to covered. Seven markets are worth visiting to experience the culture as well as purchase almost anything, both local and foreign.

From my experience, I suggest not buying from the vendors who are at the entrance of the market as they are exorbitant. Just pave your way inside and you will find better items at better price. Bargaining is subjective. Personally, if I am comfortable paying a certain price then it is a bargain for me. Always remember, your purchase is putting food on someones table and facilitating education for their children.

Dakar boasts of a lively and diverse nightlife. There is an assortment of restaurants in the city center that serve local as well continental cuisines. The local restaurants serve scrumptious food, which I was fortunate to enjoy thanks to a local who accompanied me. Dakar is one of the happening surf spots with a vast coastline of sun-kissed beaches. You can take lessons at the surfing schools mostly at Yoff beach. My favorite is Marina Bay. An evening stroll, a fun football match with the locals and a couple of beers later at their bar is my evening well spent. 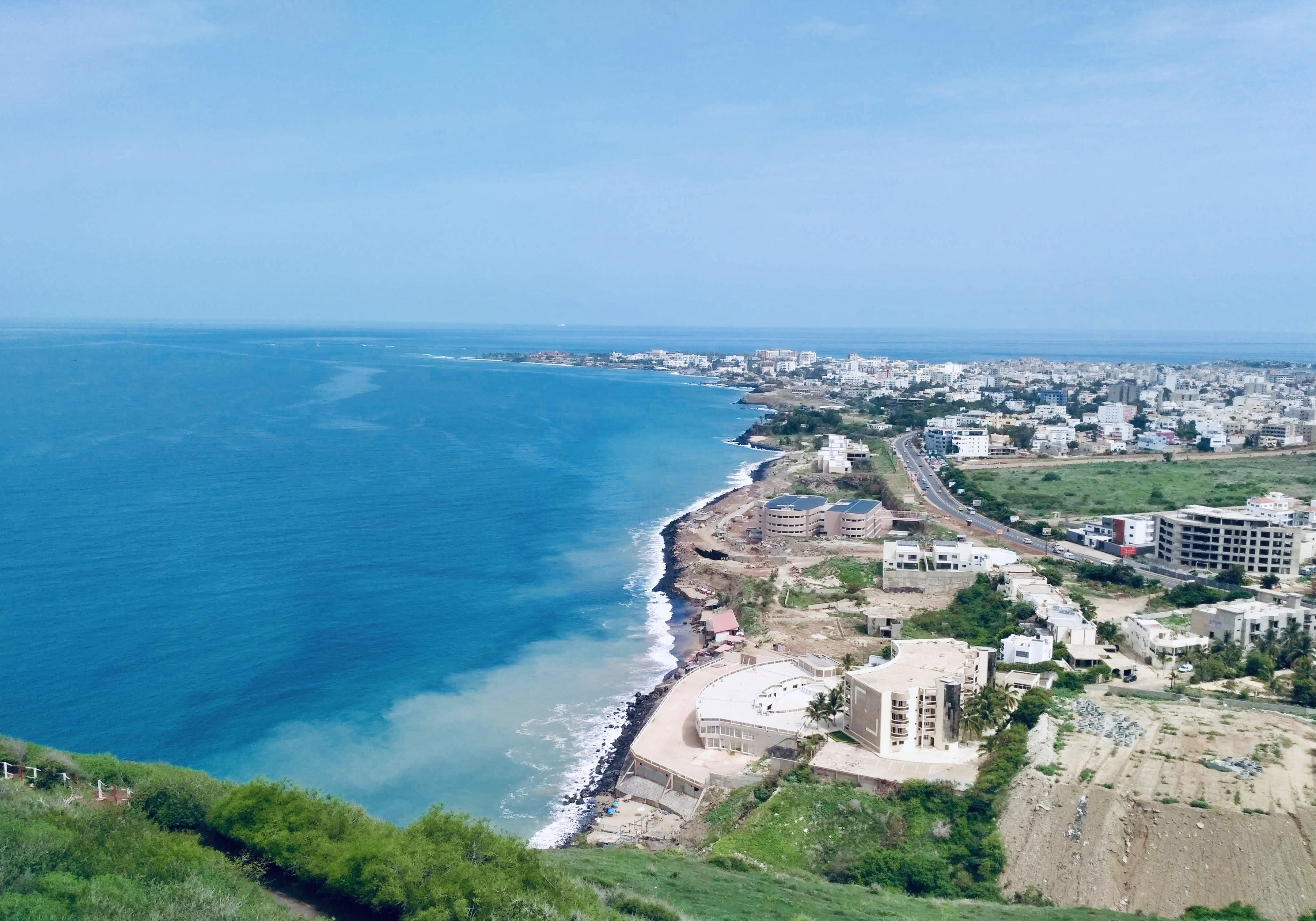 Ile de "Goree" or "Goree Island" is a UNESCO World Heritage Site situated just 3 kilometers from Dakar and can be reached by a 15-minute ferry that operates almost every hour. This sandy, car-free island, that lacked a source of fresh water, has a heart-breaking past with one of the saddest tragedies in the human history, slave trade. It was a European settlement as early as 1450. Portuguese first setup a trading post that was dislodged by Dutch in 1600 who named the island "Goe-Ree" meaning "Good Harbor". The battle continued with English and French who later gained control by late 18th century. 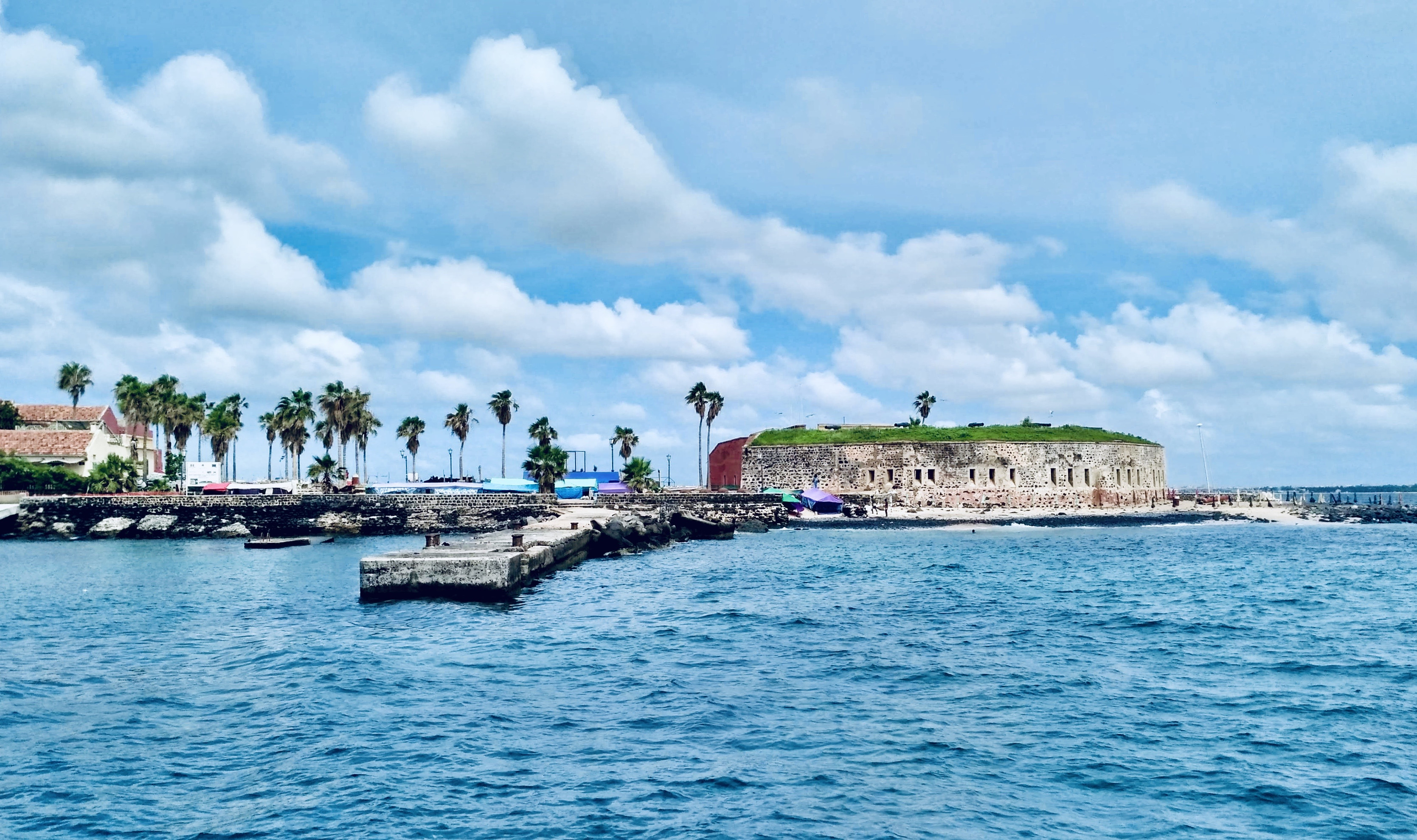 UNESCO claims that it was the largest slave-trading center in Africa from 15th to 19th century with an estimated 20 million slaves being traded mostly with the European colonies in America. Our guide explained that slaves were brought from across Africa with strong Ghanaians being favorites and cramped inside windowless slave houses. The unfit were kept on a diet until they were healthy with a minimum weight of 65 kilograms before they were exported to the colonies. The "Door of no return" is the last place where they lived on African soil before they were traded. It is considered a pilgrimage site for Africans and has deeply affected many visitors including Nelson Mandela in 1991 who was tearful. Today, it serves as a reminder of human exploitation and makes Africans emotional when they visit this place, as was the case with our guide. 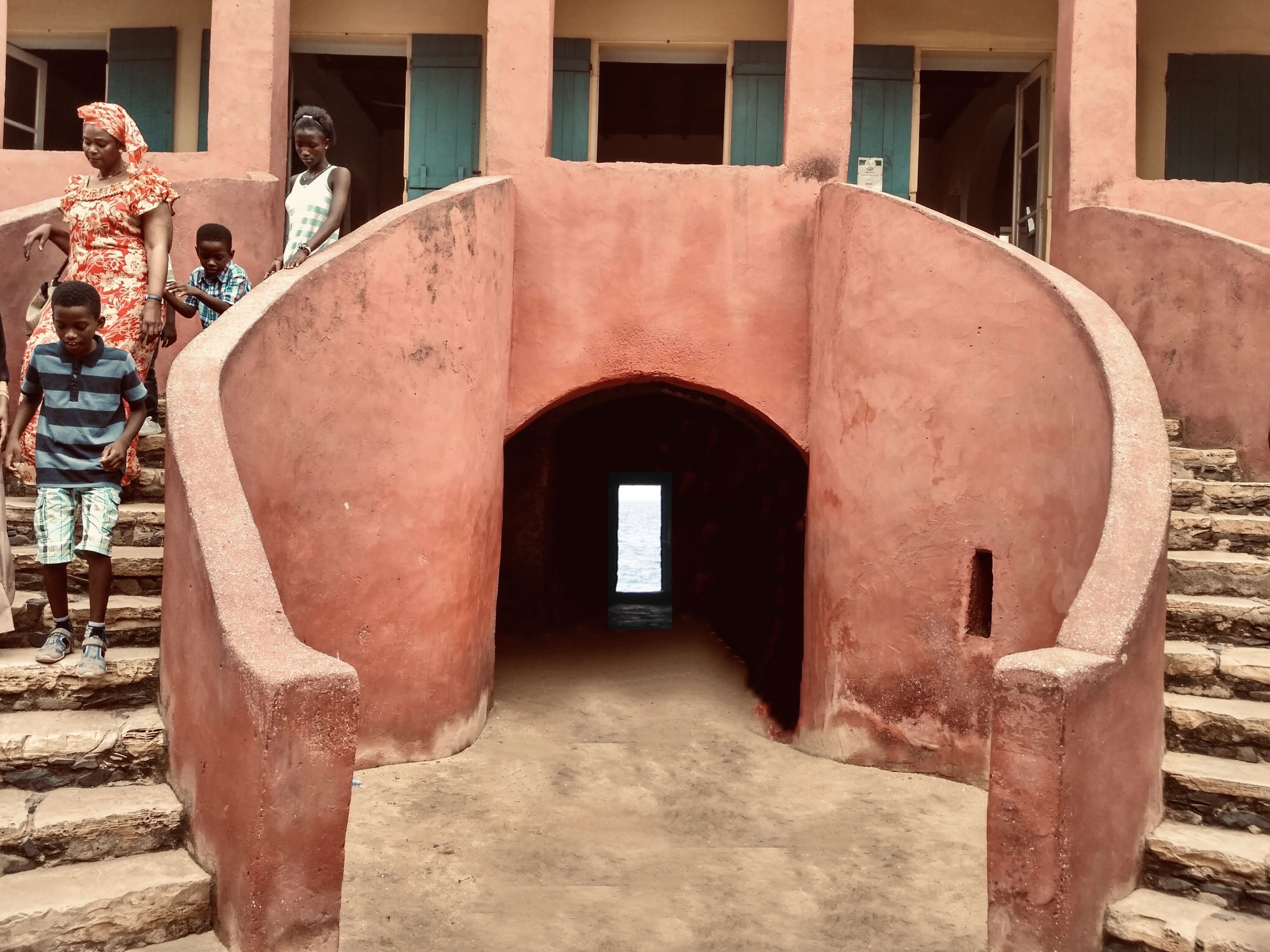 Door of No Return at Maison des Esclaves on Goree Island. The slaves embarked the ship from and left the African soil forever.

Slavery continued until 1848 when it was made illegal in Senegal after 312 years by the French. Goree Island then started legitimate trade of gum, ivory, peanuts etc. The slave houses were filled with these commodities followed by a slow decline of islands significance. Today, Goree is a commune in Dakar with population of 1,600 and home to a vibrant art community. The island has ruins of the Fort Saint-Michel, a citadel built to protect the harbor even though it was never used in combat. 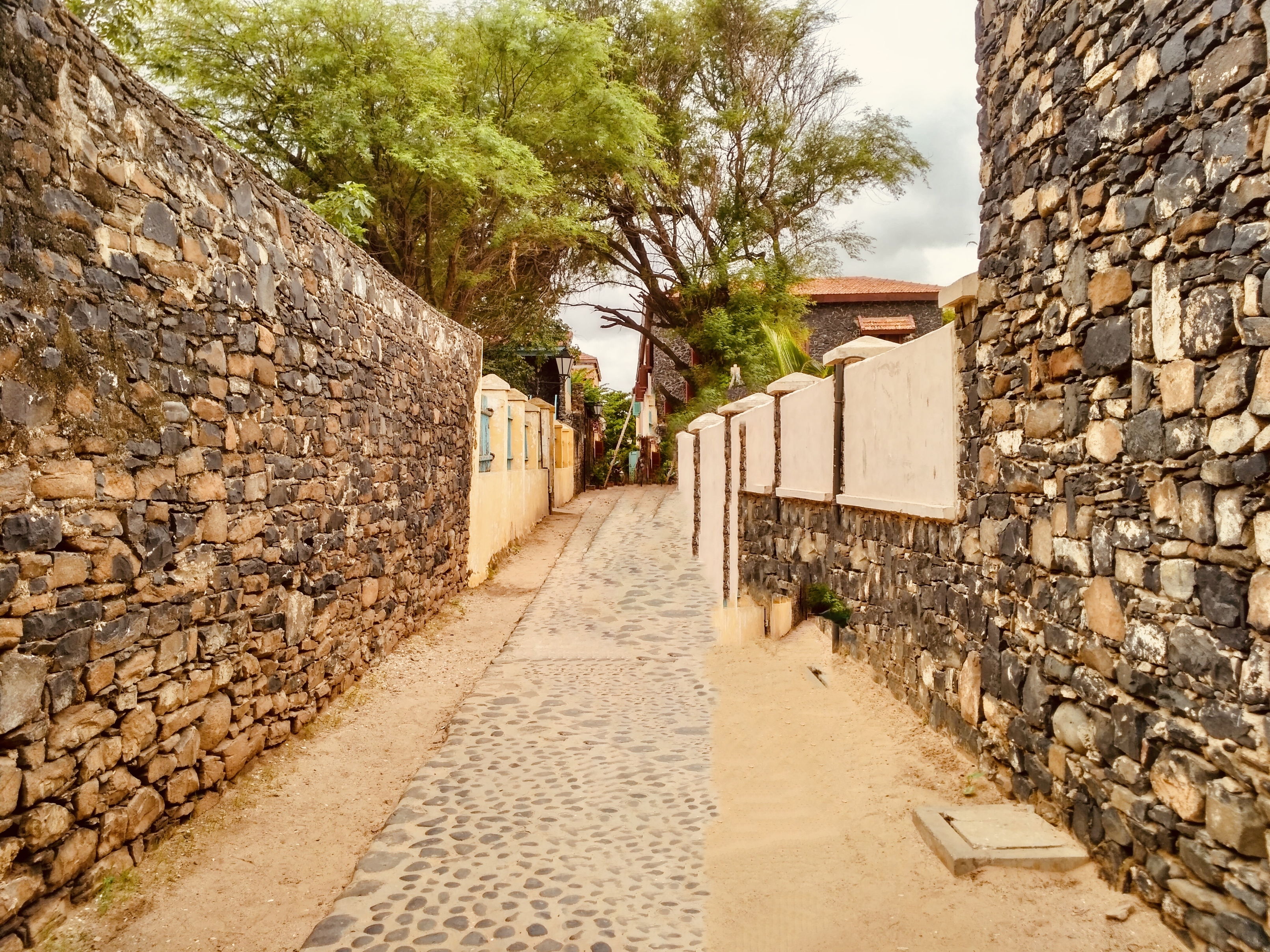 A narrow street with stoned walls on the island reminds of its colonial style architecture.

The architecture is a contrast between the forbidding slave houses and the elegant houses of the slave traders. Elders living in the island roam around and greet the tourists. Their eyes speak volumes about their tragic experiences but language barriers leave these stories untold. The youth and kids are busy playing football, surfing in the ocean or fishing along the beaches. It is business hours for the artists as they line up almost everywhere inside the fort with their merchandise. The fort leads to the perimeter wall where you get a hazy view of modern Dakar. 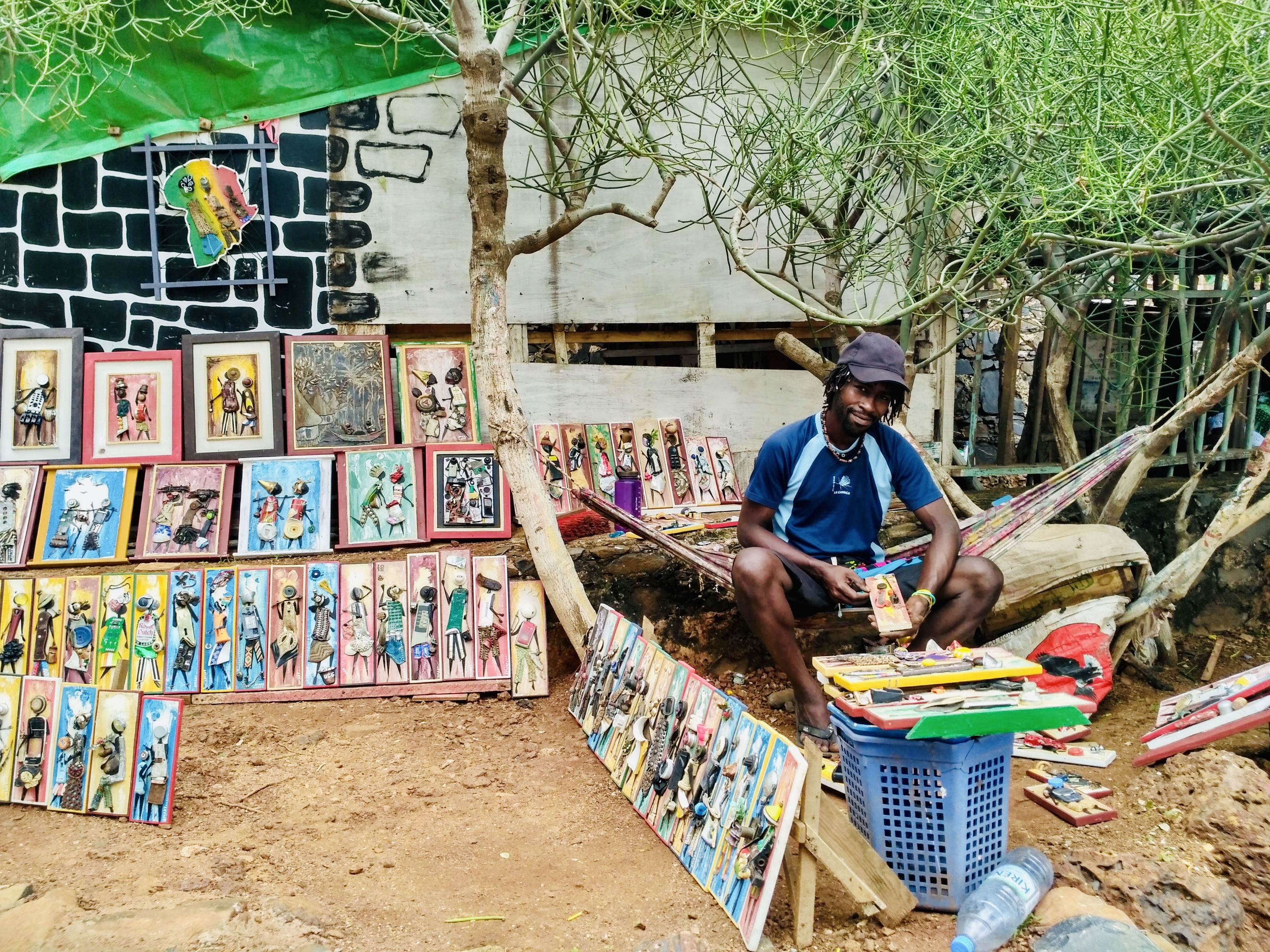 A local artist displays his piece of mastery at Goree Island.

We spent 5 hours on the island, a place we were initially hesitant to visit. Its time to catch the ferry before we get stranded on the island. The ride back to Dakar felt like eternity with each one silently reflecting on the experience. We returned to our hotel sombre and prepared for our return flight the next day. Dakar is a year-round destination. However, it rains heavily from June to August. The temperature is manageable from November to January.

Senegal is a religious tolerant county with about 96% of the population practicing Islam. Art, sculpture and music are the soul of Senegalese life. Abundance of street sellers with artistic merchandise is proof of art inheritance over few centuries.

Peanuts, rice and seafood are the main ingredients in most of the local dishes. Baguettes are the local bread and quite hard to chew. There are tons of Lebanese restaurants in Dakar offering Mediterranean food.

Dakar is one of the safest cities in West Africa. However, be watchful of your personal belongings like mobile, wallet, etc. when in crowded markets.

There are secluded beaches and islands off the coast and are reasonably safe. It is a surfer’s paradise, which many are not aware of. There are remote river deltas offering scenic landscape and teeming with wildlife. Niokolo-Koba has about 50 lions.

Senegal offers free visa on arrival for almost every national. There are no metered taxis in Dakar and you need to fix the price before you board them. Tipping is a culture in Africa and you are expected to oblige when someone provides you exceptional service. Knowing few basic words in Wolof and French will be advantageous.