It has been 16 years and I have hardly missed a visit to Western Ghats during each rainy season. Am I satisfied, considering my love for the Western Ghats? NOT quite yet. Rain and Western Ghats is a match made in heaven. You won’t be able to relate to the tranquility cocooned in the mountain ranges until you spend a few days in the middle of Western Ghats during the downpour. Rain brings with it the stunning views of evergreen shola grasslands that blend with the verdant valleys. The gentle waterfalls nestled in the folds of the hills come alive with the rain. Gushing streams, breathtaking bridges, endless dark tunnels and misty mountain peaks call out to nature lovers to come and soak in this stunning extravagance of Western Ghats.

Pandemic has put my travel into depression mode. But along came an opportunity that a hardcore Western Ghats lover like me would never miss. Indian Railways recently introduced Vistadome coaches on the train between Bangalore and Mangalore that passes through the dense rainforest. I have done train journeys on Western Ghats route numerous times before, but always passed through the ghats during the nighttime. My favorite place was to sit at the doorstep of the coach and soak in the sound of waterfalls in the calmness of night. Many times I had wished for the train coach to be transparent so I could have a 180-degree panoramic view of this natural wonder. 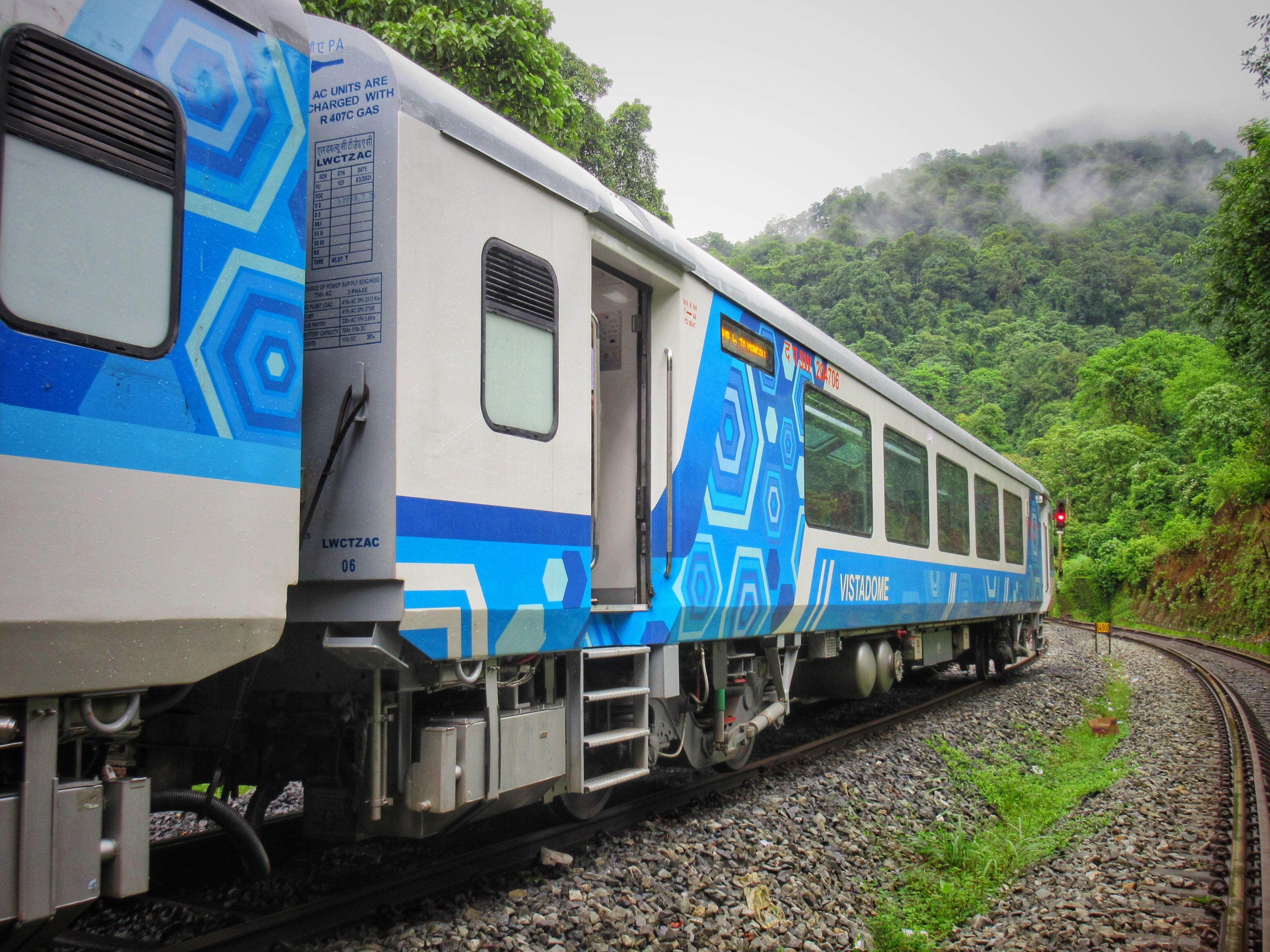 It seems Indian Railways heard me and Voila, my wish came true. Here comes the Vistadome coach with ultra-wide windowpanes and glass rooftop. The coach is equipped with wide seats, pushback chairs, long foot space, foldable snack table AND most importantly 360-degree rotatable seats. They have designed a 2x2 seating arrangement with only 11 rows (44 seats) per coach to accommodate all the luxury a passenger can avail. Each coach is monitored through CCTV cameras and is equipped with a fire safety system. The mini pantry has an OTG, microwave and a refrigerator for passengers to use. Resplendent upholstery, artificial grass carpets, motion sensor enabled sliding doors and elegant lightings provide a luxurious feel to the coach. It felt like I'm flying first class on one of the most luxurious airlines in the world. The Vistadome coach ticket price is just Rs. 1,395 ($20) for a 10-hour one-way trip. A steal, don't you think?

"First Class" experience of traveling in Vistadome Coach, the innovation of Indian Railways

It was my dream to travel this train route on Western Ghats during the daytime. I could not wait to board the Vistadome chair car the moment I discovered this new introduction along this Green Route, as it is popularly known. With some persuasion, I managed to convince my wife to join me over the weekend and here we go. We hit the first roadblock while booking the Vistadome train, the tickets were waitlisted. We had 4 days to go, so it was worth taking the risk, which eventually paid off, our tickets got confirmed a day in advance.

We boarded the Vistadome train between Bangalore and Mangalore at 7 am from Yesvantpur Railway Station. It went through the green corridor surrounded by lush-green paddy fields, Areca-nut plantations and tiny villages until Sakleshpur, about a 4-hour journey. We boarded with less than half occupancy with more passengers boarding from stations on the way and both the coaches were full by the time we reached Sakleshpur, the real experience begins now. 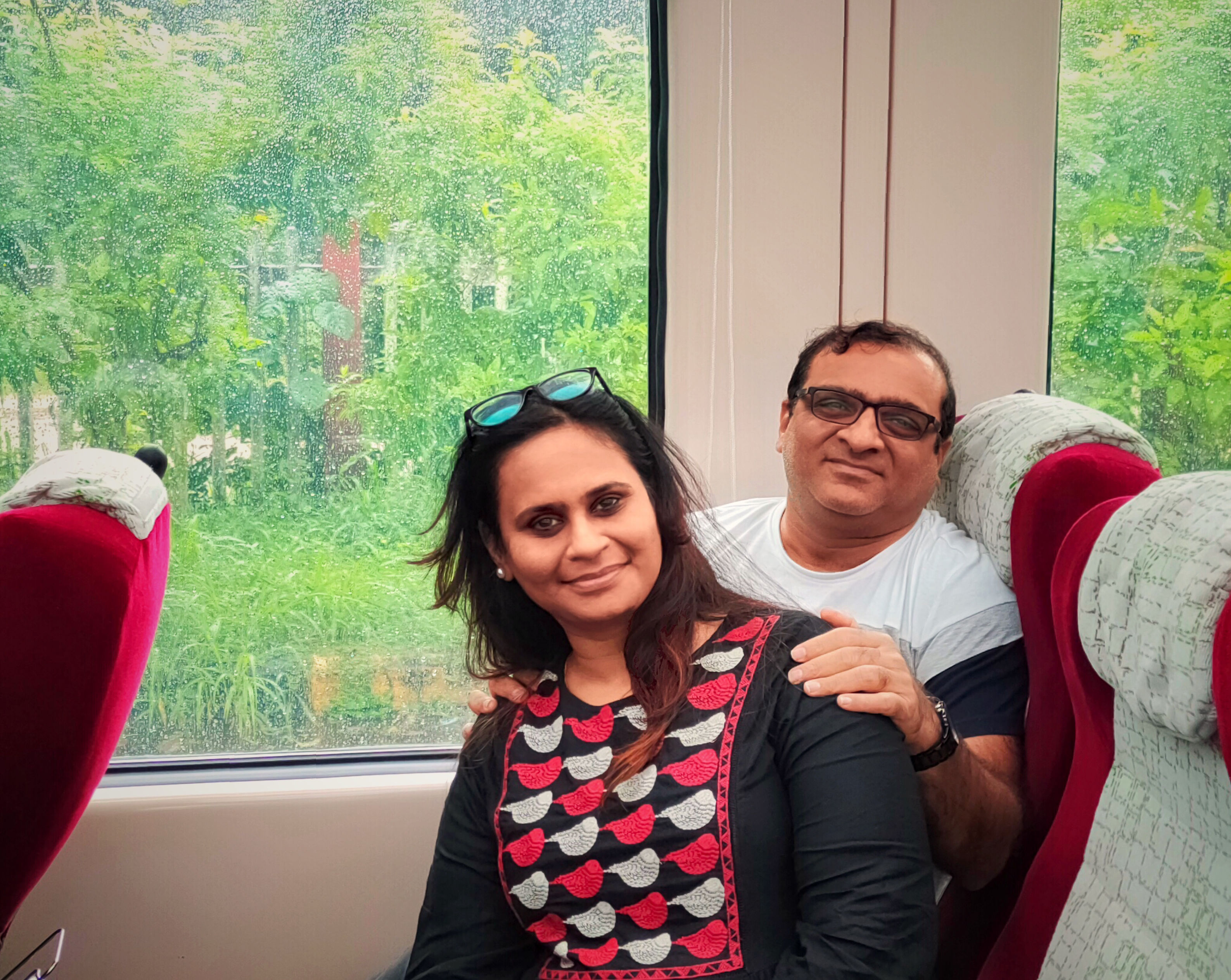 The perfect journey with my wife in Vistadome Coach

Sakleshpur is situated at an elevation of 906 meters (3,000 feet) from where the Western Ghat section begins and ends at Subramanya Road at an elevation of 120 meters (400 feet). The downhill journey in the middle of the rainforest and shola grasslands of Western Ghats covers a distance of 55.26 kilometers (34 miles) with a rolling gradient of 1 in 50. This entire section passes through 109 curves & bridges and 57 tunnels. The longest tunnel measures 0.75 kilometers. Incredible stats, right? There are countless waterfalls (100+), few river crossings and cloud-covered valleys on this 3-hour breathtaking journey through the dense forest of Western Ghats.

Each coach has a small lounge in the far end, which can accommodate about 8-10 people. The lounge has a large viewing window offering you a 180-degree panoramic view. The coaches are placed at the fag end of the train for the Bangalore-Mangalore route. Lounge of the last Vistadome coach (eventually the last coach of the train) is the place I spent most of my time during this 3-hour journey through the ghats. This view is not available during the return journey to Bangalore as the train has to go uphill and requires two engines to pull the load, one in the front and one at the rear, blocking this breathtaking view from the lounge. So in essence, the Vistadome coach from Bangalore to Mangalore offers a more complete view of the Western Ghats as compared to the return journey. 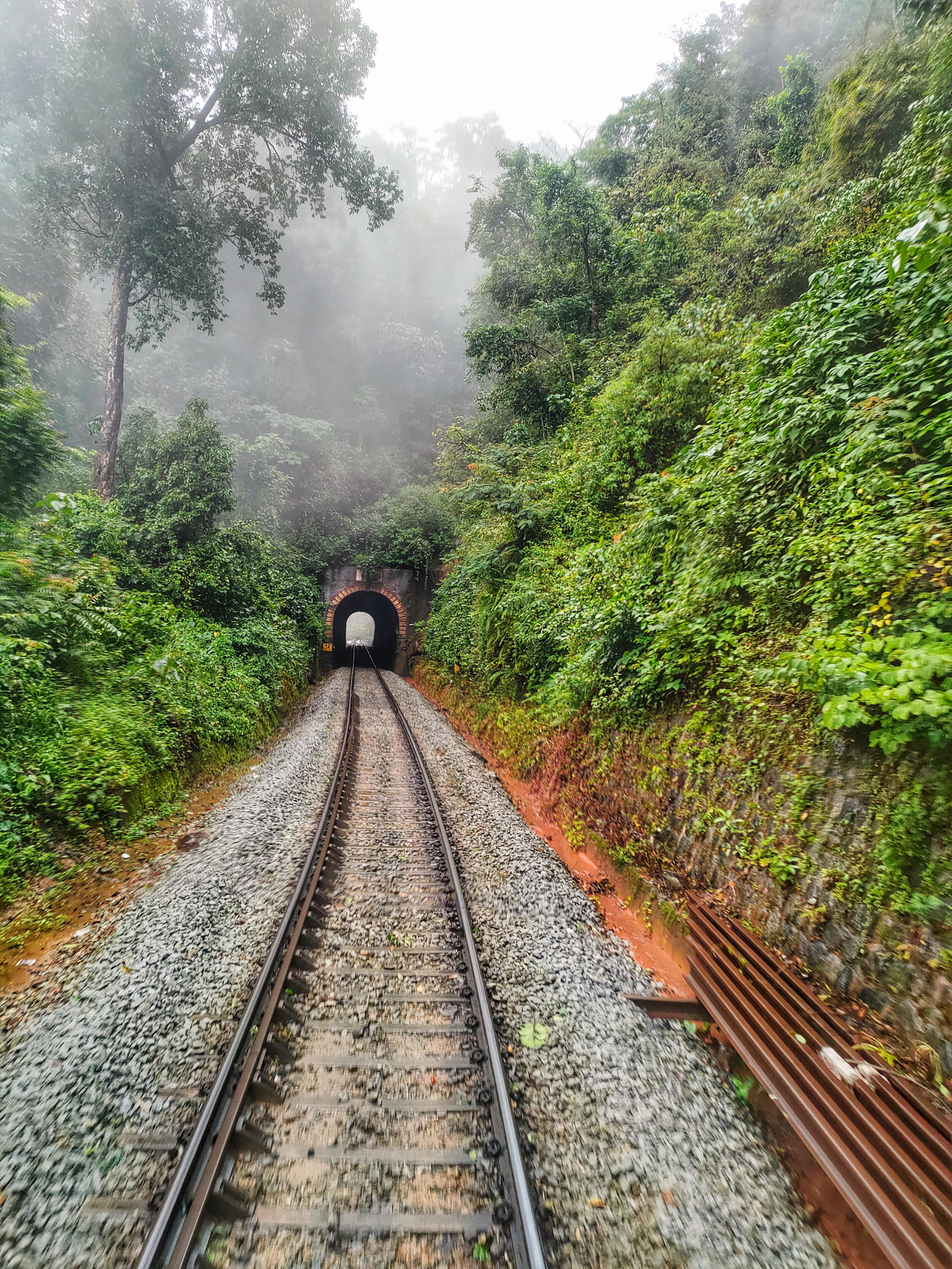 What can I say about the view of this spectacular UNESCO World Heritage Site? You have to see it to believe it! Older than the Himalaya Mountains, the Western Ghats is a biodiversity hotspot and makes for one of the most picturesque views. As we meander through this rich rainforest, awakened by the monsoon, it displays its splendor in a million hues of green. The montane forest is decorated with numerous waterfalls, big and small, that add to the beauty and excitement of the monsoon train journey. The gushing water below the bridges is truly a sight to behold. The Vistadome coach literally brings the Western Ghats into the bogie.

This entire route is an engineering masterpiece. This section of the ghat receives about 6,000 mm of rain each year. This causes frequent landslides, sometimes blocking or uprooting the rail tracks. Frequent monitoring of the tracks poses an uphill challenge for the authorities. The other challenges Railways face are moving specialized and skilled manpower with almost non-existent road connectivity. It was a herculean task even to bring heavy machinery including earthmovers and DG sets through rocky topography and lengthy tunnels. 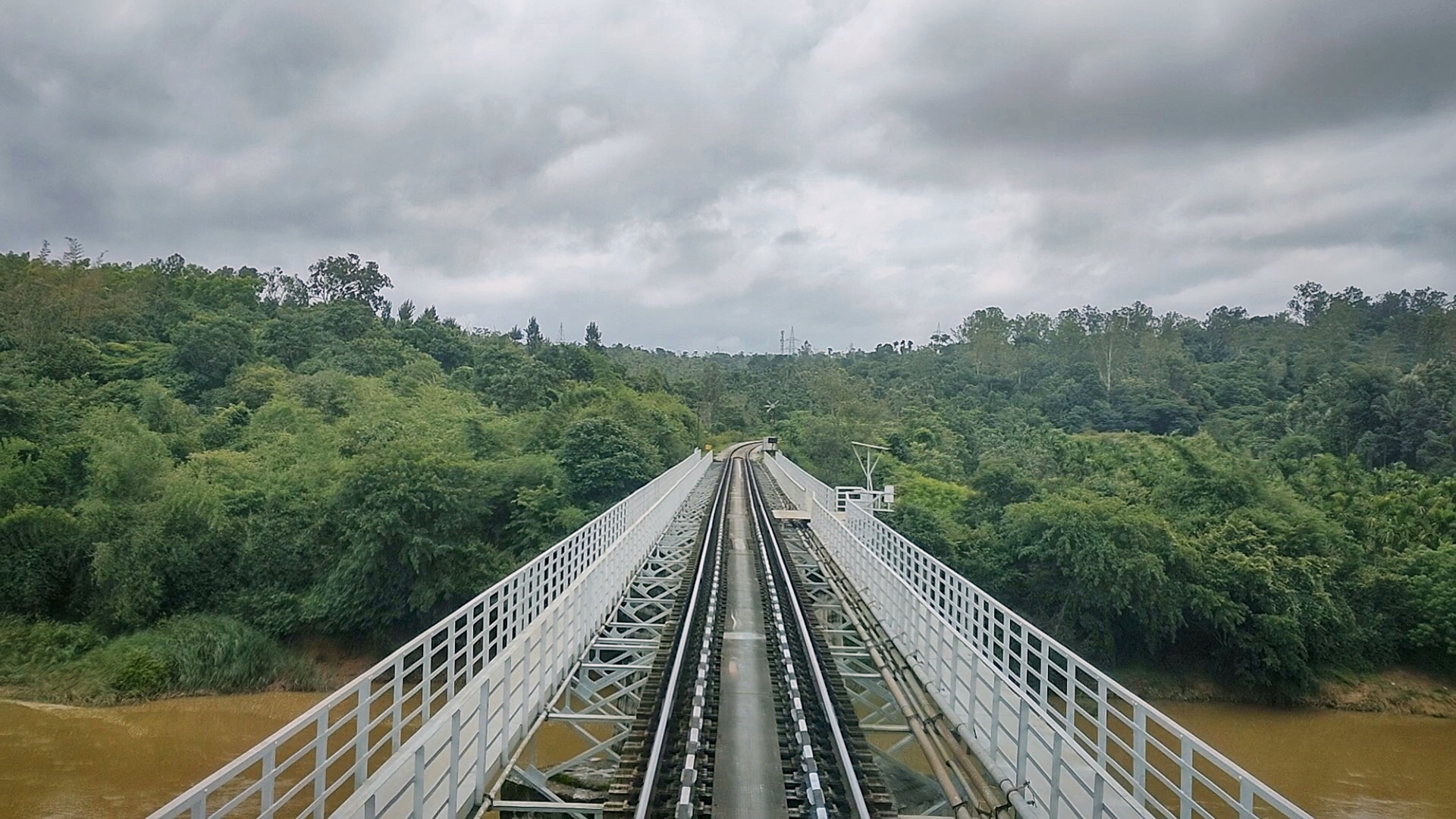 Amid all the odds stacked against them, Indian Railways commissioned meter-gauge railway tracks on this route in 1979. Trains, at lesser frequency, operated until 1996 when the authorities decided to convert them to broad-gauge to increase the train frequency and also allow freight trains. All the trains were discontinued until 2007 for the track conversion work to be completed in this tough terrain amid natural challenges. The trains restarted plying between Bangalore and Mangalore from 2007 onwards but it hit another bottleneck in adding more trains along the route due to some of the safety protocols due to the ruling gradient of 1 in 50 in the g hat section. Indian Railways implemented cutting-edge Multi-Section Digital Axle Counter (MSDAC) technology for safe and seamless operations in ghat sections in 2020. This opened the door for plying a large number of trains and eventually introduction of Vistadome coaches in July 2021. A commendable job done by the Indian Railways. 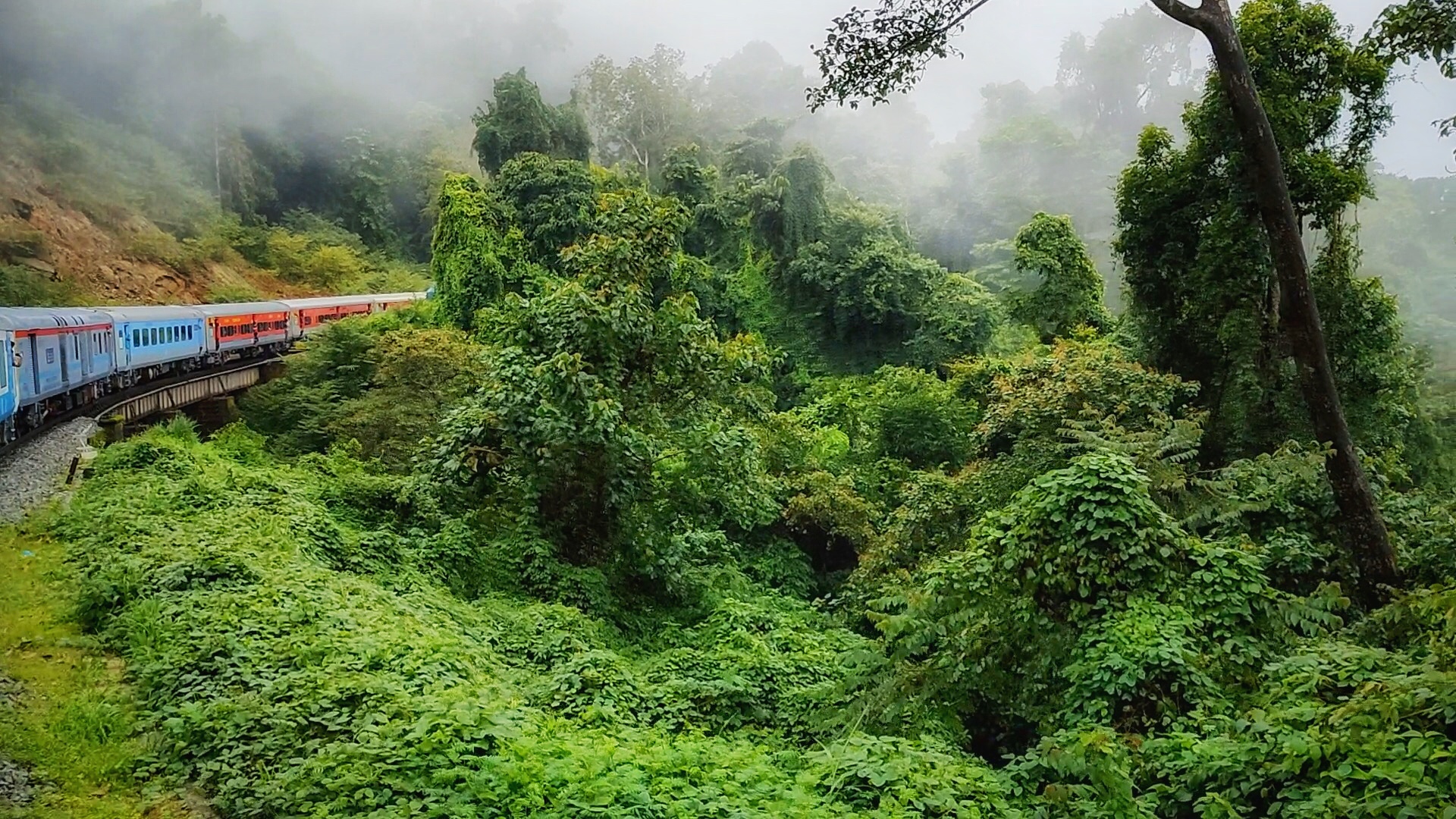 Maintaining and providing a safe passage to trains through "Green Corridor" is a continuous process and has its own challenges during the rainy season. It also requires huge manpower on the mountains for frequent physical inspection of the tracks, bridges and tunnels. A staff of more than 100 people have dedicated themselves to ensure the safety of passengers. They have set up an inspection post every 5 kilometers where a few of the staff members are stationed to continuously monitor and report the status of rail tracks to the authorities. I salute all those work heroes due to whom nature lovers like me can enjoy this scenic route when it blossoms the best, when it rains.

Hacks to have the best Vistadome experience:

Which is the beautiful train route to enjoy Western Ghats?

Is food provided in the Vistadome coach?

The Vistadome coach between Bangalore and Mangalore does not provide food. However, it does have a mini panty with a microwave and fridge for the use of passengers.

Which train has a Vistadome coach from Bangalore to Mangalore?

The following trains currently run on the Bangalore-Mangalore route with Vistadome coaches:

Is EC (Executive Chair Car) and Vistadome the same?

Yes, Vistadome trains booking has to be done under the EC class. The ticket for this coach is priced separately and the highest among all the booking classes. My favorite season to visit Western Ghats is during the monsoon. If you don’t like rain then a trip immediately after the rain is also good to witness its real beauty.

Being a train journey, there is no art & culture that one experiences, but what is on offer is millions of spectacular views of the splendor and diversity of the Western Ghats.

Due to Covid19, Indian Railways has stopped panty service. However, Vistadome coaches are equipped with their own pantries but they do not provide food except snacks. It is advisable to carry your own food.

The entire coach is monitored with multiple CCTV cameras and passengers who do not hold relevant tickets are not allowed to enter the coach. Also, these coaches are not interconnected for transit with the rest of the coaches.

This entire journey through Western Ghats passes through dense forest and mountains far away from the road connectivity. The scenery you witness enroute can’t be experienced while traveling by road.

The view is much better if you sit on the right side of the coach. It is not in your hand to choose while booking but the last coach (#2) has a panoramic view from the lounge. This view is available only from Bangalore to Mangalore.