Whenever I plan a vacation, I run short of options, as I have already explored most of South India. Yes, I am a crazy traveler. While looking up places to visit, heritage sites pop up constantly, prompting me to explore that category. Somehow I have been skipping them intentionally for over a decade. It would not be a lie to say that I had a false belief about heritage places, as they look similar and mundane to me. However, after this trip to Hampi, my perception changed. I spent 3 days in and around Hosapete (also known as “Hospet”) and Hampi. I was amazed to see that the entire area is unique with hidden history of Hindu Kingdom of Vijayanagara and its ruins that remained after Muslim Sultanates defeated them.

I will not do justice to Hampi and its rich heritage if I cover this stunning UNESCO World Heritage Site in one story. Hence, I am sharing my experience in two parts. PART 1 is all about monuments of the 14th Century during the rule of Vijayanagara Empire.

Hampi was the capital of Vijayanagara Empire during the 14th century. History attaches a huge significance to Hampi with reference to Hindu Kings, their kingdoms and state-of-the-art ancient architecture. It depicts history as described in Ramayana. It has a strong mythological story associated with it that shows real ruins of the era of Kishkinda Vanara Kingdom where Lord Ram and his brother Lakshman stayed when they set out in search of Goddess Sita (Lord Ram's wife), who was abducted by Ravana (the Demon).

Travel to Hampi through Hospet Town:

Bangalore to Hampi via Chitradurga and Hospet is a fantastic drive of 370 kms., mostly on an excellent 4-lane expressway, NH 47. Hospet is located on the banks of River Tungabhadra. A massive reservoir is built over this river, which was a big surprise to me. Hampi is just 11 kms. from Hospet so we decided to stay at Hospet and explore this rich heritage site.

Many people say HAMPI is like the Angkor Wat of India. Hampi is an ancient town, which is a monument in itself; it's like an open museum of archaeology and history. It's a small town in Karnataka, located on the bank of River Tungabhadra from which the largest open monument of Asia was named HAMPI. Hampi was previously known as Kishkinda Kshetra and the Kannada name Hampe was derived from the Tungabhadra River Pampa. It is said that Pampa was Brahma's daughter who was later married off to Lord Shiva. 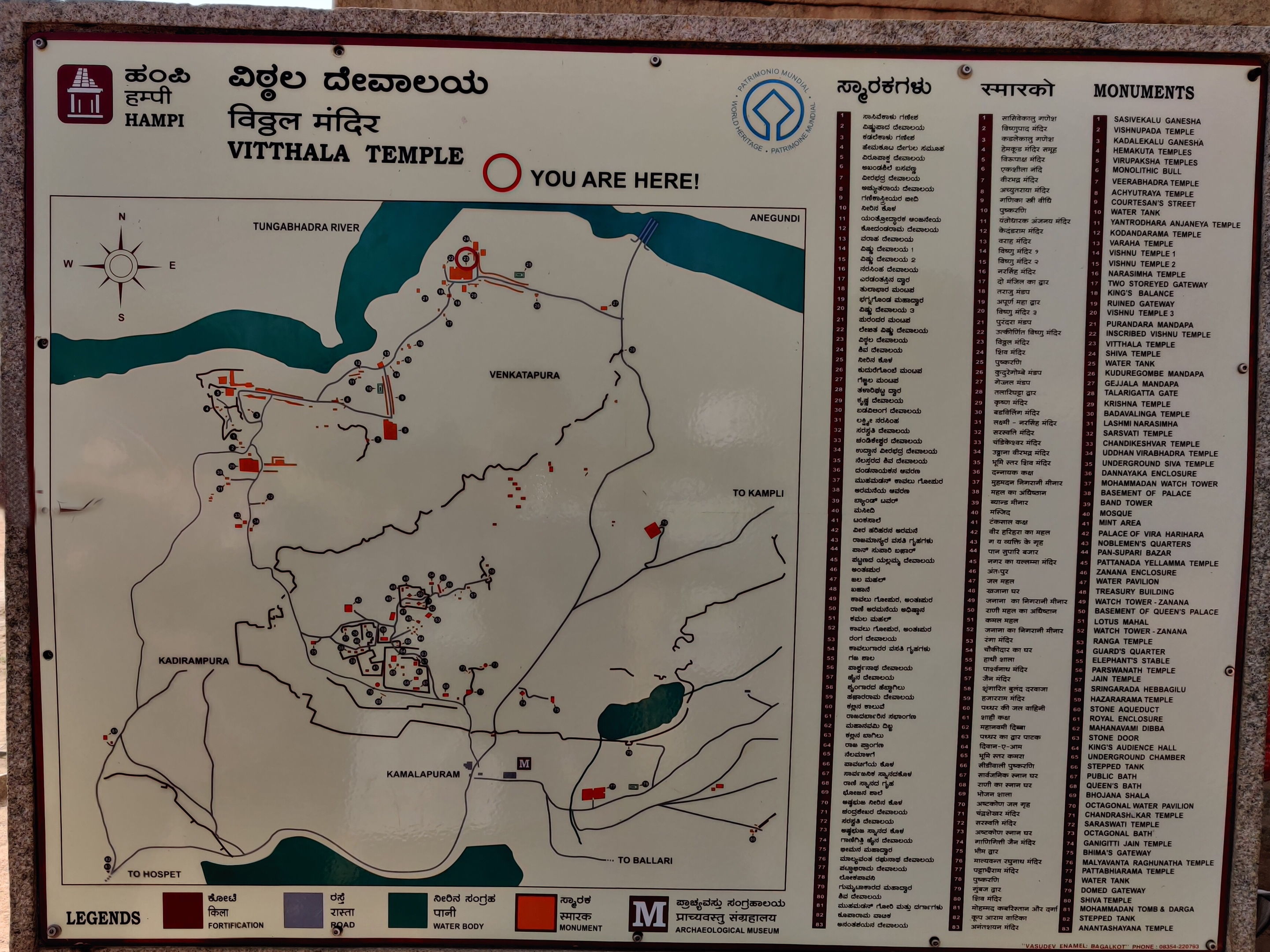 List of Monuments at Vitthala Temple in and around Hampi

Hampi also has a strong mythological story associated with it. There are several spectacular mountains that are said to be the places where Lord Ram, Hanuman, Sugreeva and Vali stayed. And because we are talking of Ramayana and its association with Hampi, the first thing that comes to mind is the Hazara Ram Temple at Hampi, one of the thousands of temples here. The word Hazara was derived from a Telugu word Hazarumu that also means an entrance hall. If you have ever visited Hampi, you would have seen many intricately done carvings that depict a lot about Ramayana and the many stories surrounding the same. The Hazara Temple used to be a private temple for the royal family of those times. Hampi has more than 500 ancient monuments.

We were lucky to reach Hospet by noon as we started early from Bangalore. We saw a signboard showing us the route to the dam and the car parking lot. The only way to visit the dam is through a Government operated tourism bus that takes you on a nice drive to the top from where one can enjoy breathtaking views of the Tungabhadra Dam. The bus usually runs full most of the time so you may need to wait longer if you arrive there late. We took the bus to reach the top and enjoyed the spectacular view. While returning, we walked around a bit to capture some lovely pictures of the river and dam and took the small trekking route down enjoying scenic views of the river and dam. 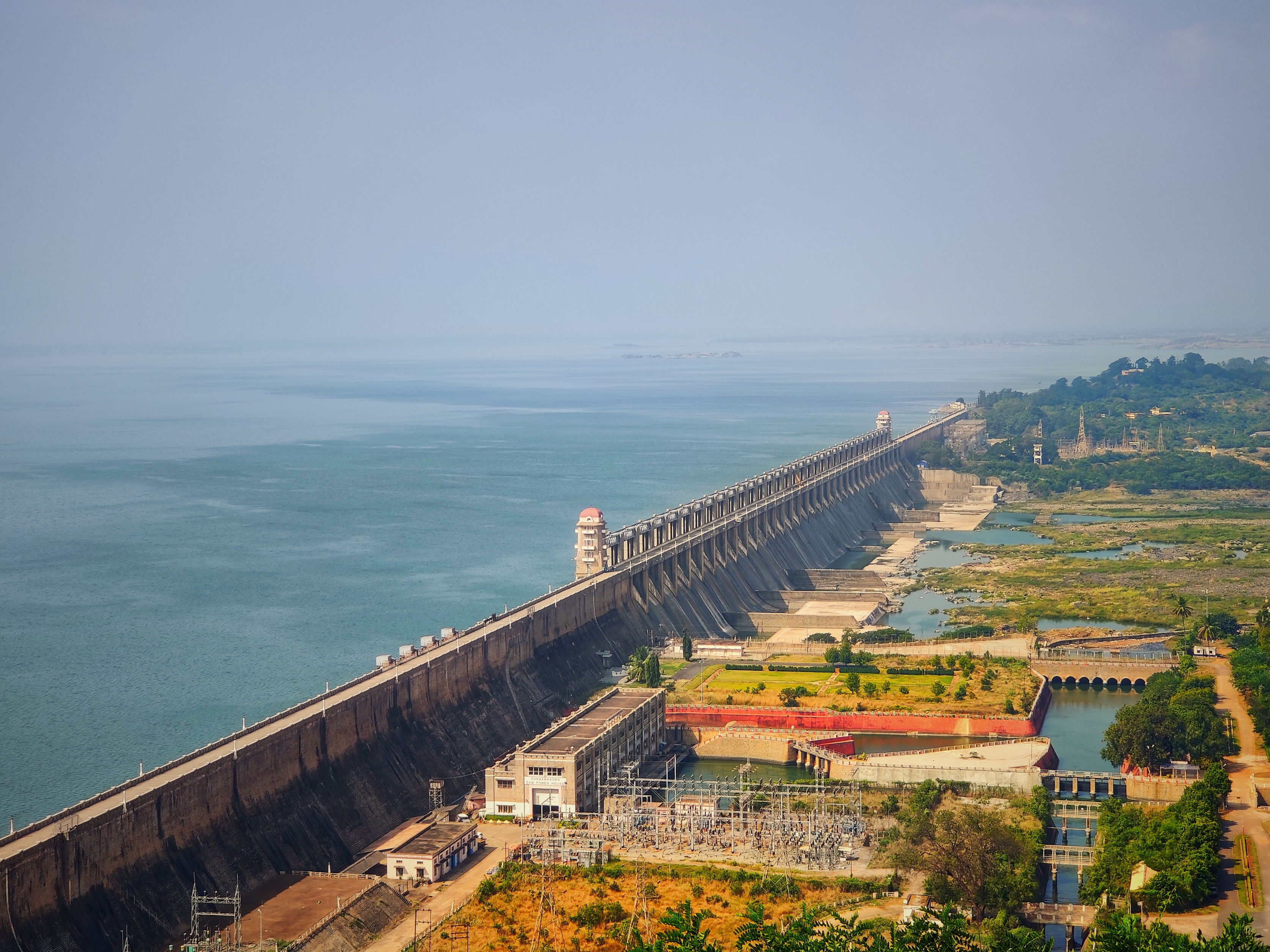 We took a break and had a scrumptious lunch in Hospet and then checked into Royal Orchid Hotel. We were not that tired so we decided to take a short tour to Hampi. On the way, we found few interesting local people and Govt. of Karnataka notified guides who kept chasing after us to provide their expert guided tour of Hampi. One of my friends had told me that the best way to understand this beautiful heritage site was to engage one of the knowledgeable guides. These guides and local people are trained to explain about all monuments including carvings on each pillar and stone in each temple.

We reached Hampi Main Bazaar, which is a happening place. We parked our car and started walking towards numerous clusters of temples. Enroute, we chanced upon a small mountain on the left from where we got some amazing pictures of the temples.

On the right, was the entry to trek all the way to Matanga Hills, one of the most famous and rigorous treks on mountain rocks. Initially, we all struggled for a bit while climbing, as it was very risky. Losing balance could lead to a steep fall causing serious injury. I would recommend starting the trek such that you reach atop before sunset. You do not want to miss the sunset from here. While trekking we saw many ruins of temples and monuments, which looked like toy models from atop the hill. The old temple from the top is spectacular. It is the highest viewpoint in Hampi and many tourists including foreigners visit this spot to capture the stunning sunset. One has a clear beautiful view of Virupaksha and Achyutaraya temples from here. My camera worked overtime during the trek capturing the real beauty of Hampi. From here, we could see another hilltop temple that few tourists claimed was Lord Hanuman Temple marking his birthplace. The view was so astounding that we could NOT resist trekking there as well. 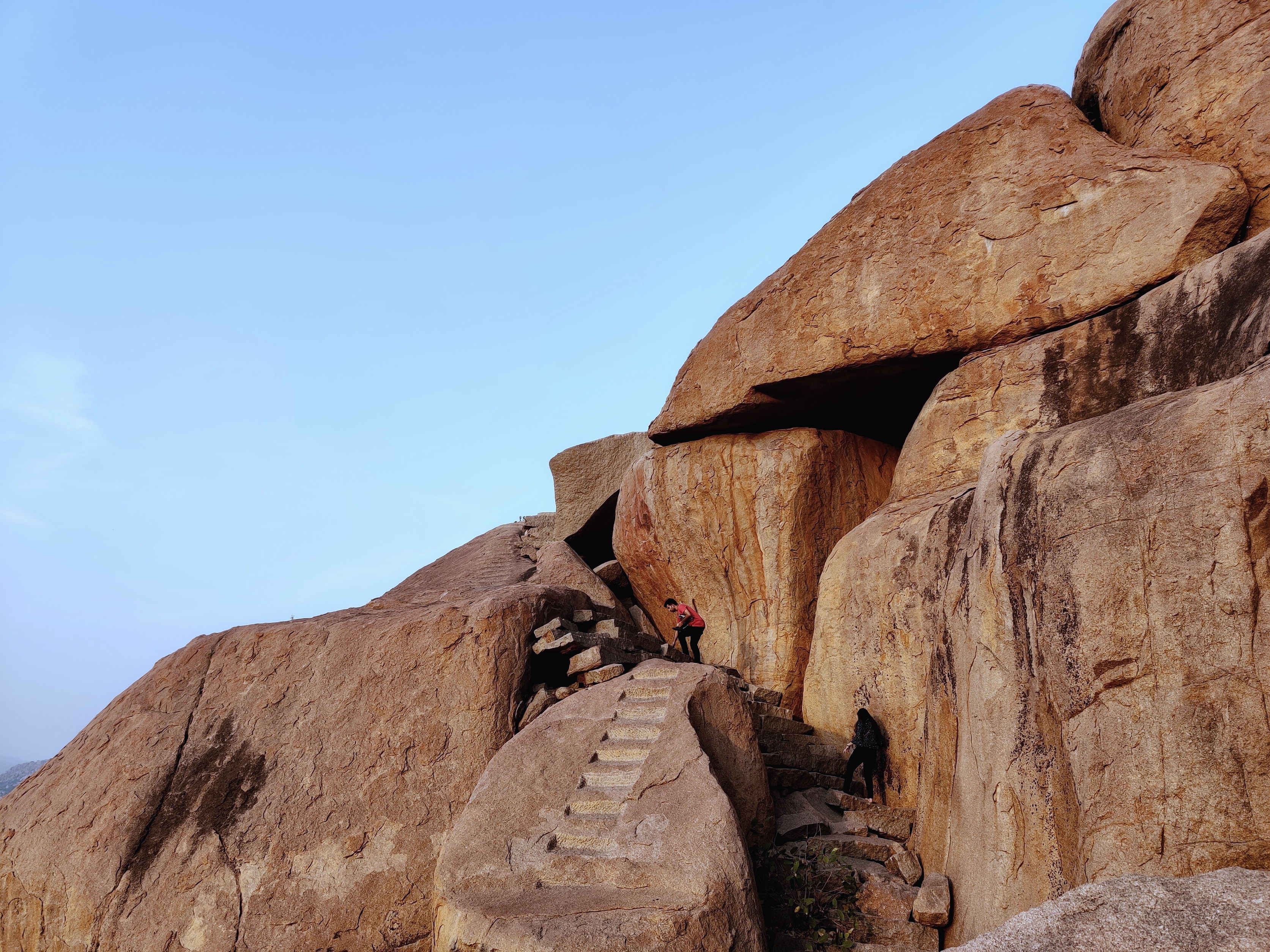 While driving across Hampi you can see two major and highest peaks, one is Matanga Hill and the other is Lord Hanuman Temple. Many people are not aware of this temple. The other challenge is the numerous steps to climb, which are naturally made from hill rocks making it a strenuous 1-hour trek. We of course trekked to the top and what a fantastic view awaited us! The view of surrounding paddy fields and the Tungabhadra River was stunning and I captured some excellent shots. This is unique Lord Hanuman Temple that is part of a cave standing at the peak of hill is of huge religious significance. Devotees from all over visit this temple and spend time here. 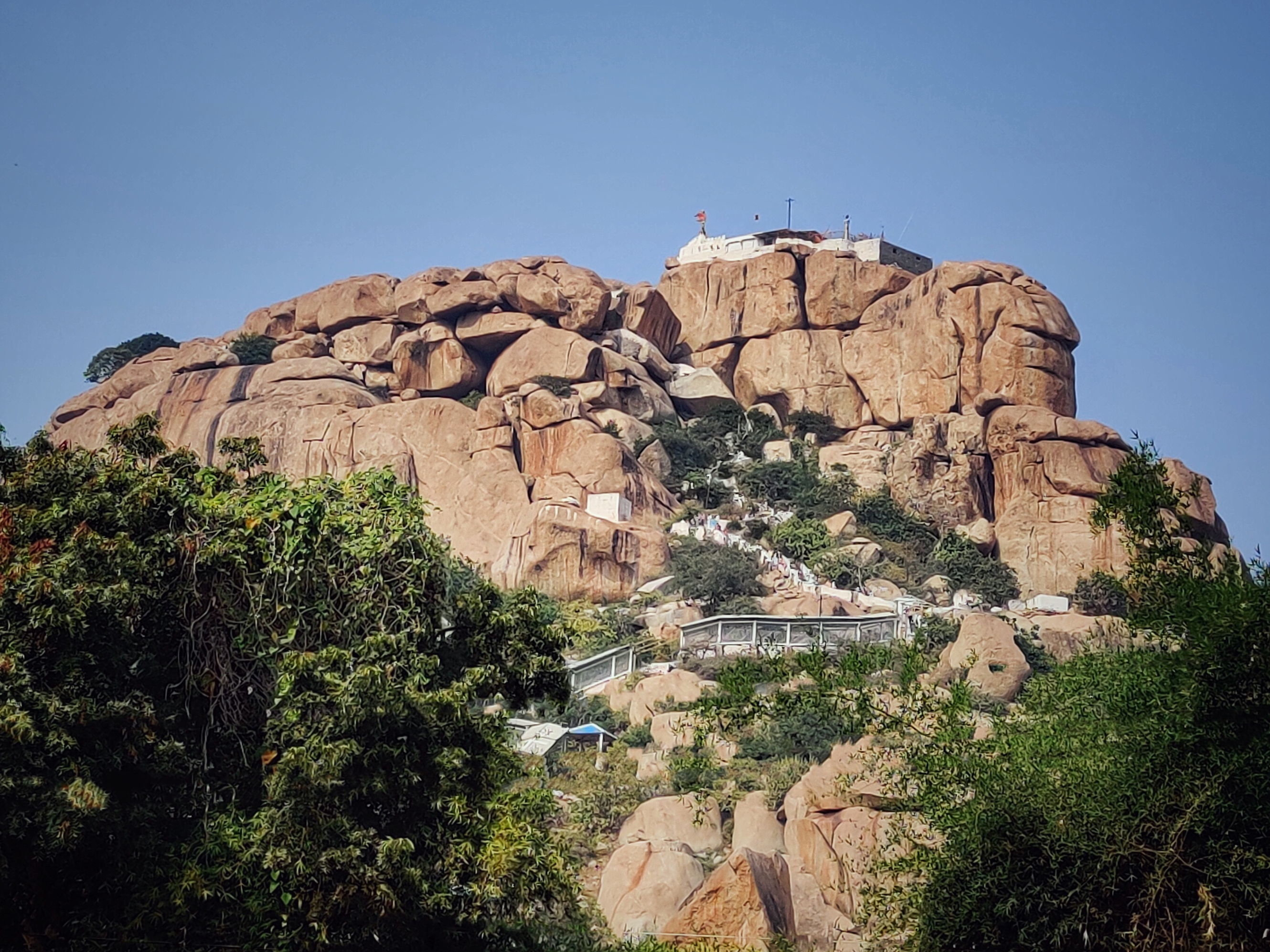 One cannot miss this fun experience. It is like mini-Goa minus the beaches, full of hippies who come here to hang out and stay in huts. We spent half a day here enjoying the chilled out vibes of the place.

Hippie Island gets its name from its vibrant culture. Virapapur Gadde is a small island located across the Tungabhadra River. Known to be a backpacker's delight, this island is stunning and is popular amongst locals as well as tourists for its laid-back ambience and cozy cafes and lodges. Tourists spend their time relaxing at one of the many cafes and shacks, like Green Garden Restaurant, Laughing Buddha Cafe, etc. while gorging on great food, and soaking in the view of beautiful paddy fields.

This location is also known to be a center for people to host sunset jam sessions with musical instruments creating a fun party-like atmosphere. We visited Laughing Buddha and there was a huge crowd for late lunch. We enjoyed the ambience of caf sitting comfortably and enjoying the river view and music. They have a mouthwatering menu, which includes burgers, pizzas, curries, sizzlers and also served chilled beer. After the arduous 2-hour climb to Shri Hanuman Hill Temple, our fantastic meal and relaxation at Buddha Cafe was perfect. They had some adorable pets that enhanced the ambience and of course make for excellent pictures. 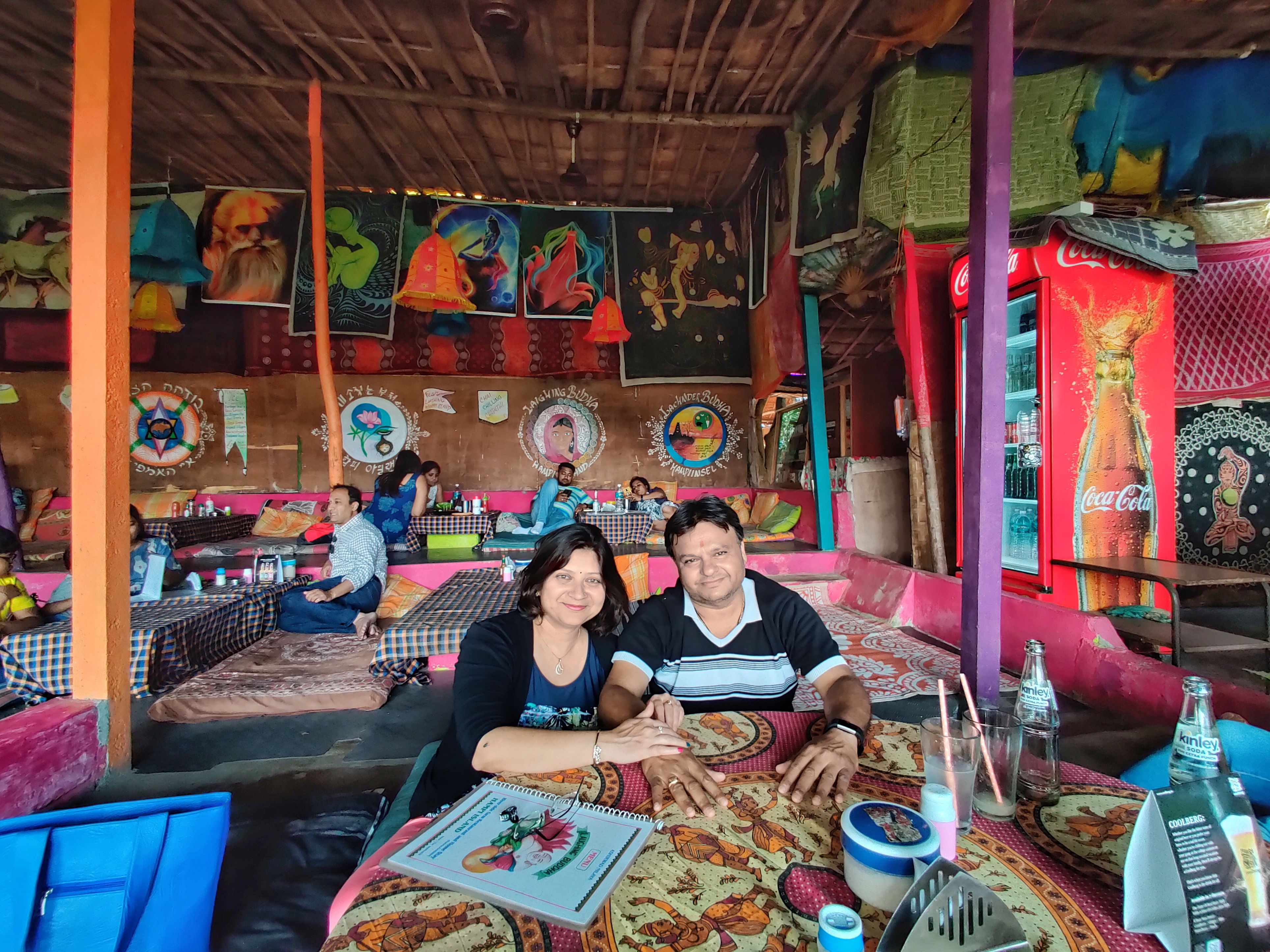 Chilling with my better-half at the uniquely designed Buddha Cafe at Hippie Island, Hampi

While in Hampi, one MUST indulge in the coracle ride, which is native to this area. It is an amazing experience. Coracles have been an important means of transportation in Hampi ever since early 15th Century and this ride offers an amazing view of both sides, rocky mountains and temples built under the caves. The Coracle owner indulged us and gave us a ride inside Tungabhadra River while shedding some light on the history of the caves. This was where the famous fight of Valee and Sugreeva took place as described in the Ramayana. When you are in Hampi you feel the ancient history. Recommend that you arrive early to take this local Coracle ride as it does get crowded later and a half-hour wait is there. The activity also closes by 6 PM. 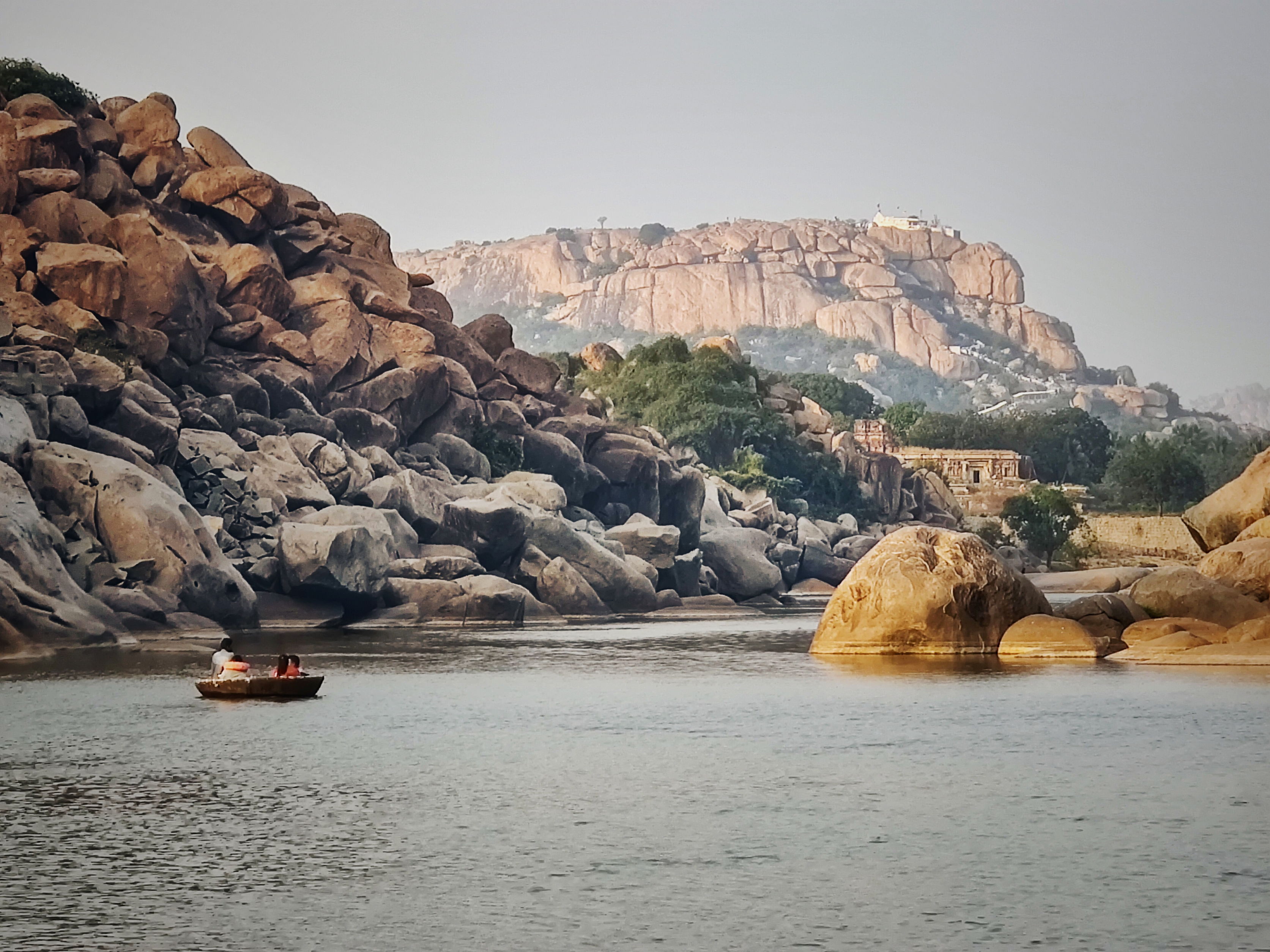 The Coracle ride concluded the first phase of our trip to Hampi. I am sure there is a lot more hidden history to explore. That is for another trip and another guide for another perspective!

As we headed to the second phase of our trip, the excitement was building. There were many pleasant surprises awaiting us and we were prepping for it. Check out Part 2 of True Glimpse of Vijayanagar Empire here.

Hampi receives heavy rain during monsoon due to its proximity to Tungabhadra River. Oct through Feb is the ideal time to visit Hampi, with Dec being ideal. The weather at this time is warm and pleasant. March to May is peak summer hence to be avoided

Hampi is a cultural hub in South India with many festivals celebrated all year long. Vijaya Utsav is the most celebrated in November. It is a cultural extravaganza that is worth witnessing and. brings back the magic of royal heritage of 15th century.

Hampi serves the best south Indian food. The traditional Northern Karnataka Thali meals are most popular in Hampi. One should NOT miss MANGO RESTAURANT that serves delicious thali and lassi. Delicious non-veg food is available in Hippie Island.

Hampi is a famous destination for solo travelers and is safe for tourists. Some travelers prefer to stay in Hospet. Being a religious site, certain decorum is maintained creating a safe environment. Anyway, being cautious is a basic rule to follow.

Being a unique heritage site, Hampi is not on every traveler’s radar. You will come across travelers who are truly interested in the history and culture of this ancient town.

Plan your trip in advance since Hampi is a small town. Also, renting a car or motorbike for local travel is best to cover more ground. DO NOT VISIT WITHOUT GUIDE. Respect local people, their customs and dress appropriately.