The Land of High Passes

Some trips that we make are destiny and they create lasting connections with the destination and my first trip to Leh was exactly that...DESTINY. A fun trip made a decade ago with cousins ended up becoming a passion and since, the allure to Ladhakh is irresistible. Over the years, I have connected with like minded travelers and since my first visit in 2011, I have made several trips to Ladakh with my group. Being an avid traveler with a passion for photography, Ladakh is my favorite destination compared to all the other places I have traveled to over the years. The Ladakh experience is extensive and impossible to capture at one go. This has prompted me to share a series of stories, with this being the first of many to follow. This story will encapsulate my experiences on the first couple of days in Ladakh spanning across Leh, the capital city of Ladakh and the surrounding places.

Arriving in Ladakh itself is an experience, whichever route you choose, by air or a road trip. Travelers arrive in Delhi or Chandigarh and then proceed to Ladakh either by road or by air. Several factors influence this choice. If time is a constraint, it is advisable to fly into Ladakh as it is about an hour's flight. For the more adventurous and relaxed travelers, a road trip is perfect. I have personally done both and would say each experience is different and unique. My first trip almost a decade ago was by air and it was the most fantastic flight ever. Around 30 minutes of the one-hour flight to Leh is over the Himalayas offering the most incredible sights of the majestic snow-capped mountains. I was lucky to be able to capture this spectacle on camera way back in 2011 as photography is prohibited now, Leh airport being a high security zone. These spellbinding views were a preamble to what was in store for travelers to Leh, so don't forget to choose a window seat to catch this surreal experience.

Leh is 11,000 feet above sea level and the oxygen levels here are reduced by 50%, which our bodies are not accustomed to. This puts all travelers at a risk of AMS (Acute Mountain Sickness). It is recommended that one maintains a good level of physical fitness before traveling to Ladakh and once here, take a couple of days to get acclimatized. Road trippers do not face much of a challenge on this front because they gradually climb smaller peaks during their drive before reaching Leh. As a precautionary measure, I always carry Diamox, a medication that helps treat AMS. SInce it is recommended for travelers to take it easy for the first two days after landing in Leh, we decided to indulge in the city itself and some of the surrounding areas. 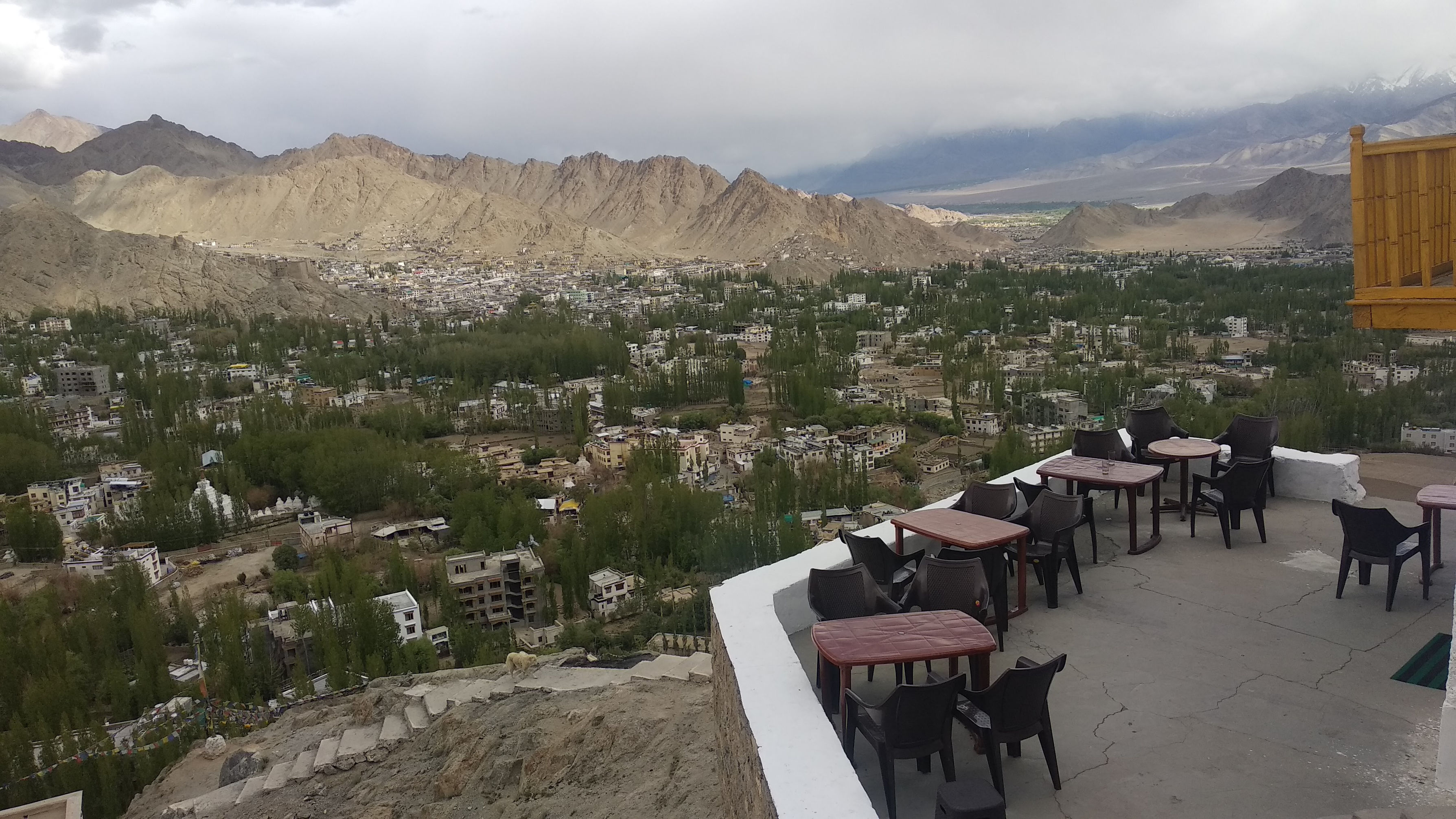 Panoramic view of Leh, the capital city of Ladakh with the majestic Himalayas as a backdrop

On day one in Ladakh, we wandered around immersing ourselves in the ambience and then set out to explore Leh. Our first stop was at Gurudwara Pathar Sahib, 22 kms from Leh, on the Leh-Kargil road. Constructed in honor of Guru Nanak, this Sikh place of worship located at an altitude of 11,800 feet was built during 1515-18. It is believed that when Guru Nanak was returning to Punjab via Srinagar, he vanquished a demon who was trying to crush him with a boulder in this place, making it a sacred place for Sikhs. After paying respects and participating in the langar, we headed to Magnetic Hill. At an altitude of 14,000 feet, this famous road in Leh is surrounded by natural beauty and mysterious magnetic forces. It is believed that the hills have a strong magnetic force that pulls vehicles uphill even when in neutral gear. There is a yellow line that indicates where the vehicles must be parked to experience this intriguing, gravity-defying phenomenon. It was rather spooky to see how our vehicle started moving at a speed of 20 kmph uphill!. So is this really the magnetism of the hill or a mind-blowing illusion? Whatever it is, it is an eccentric experience! 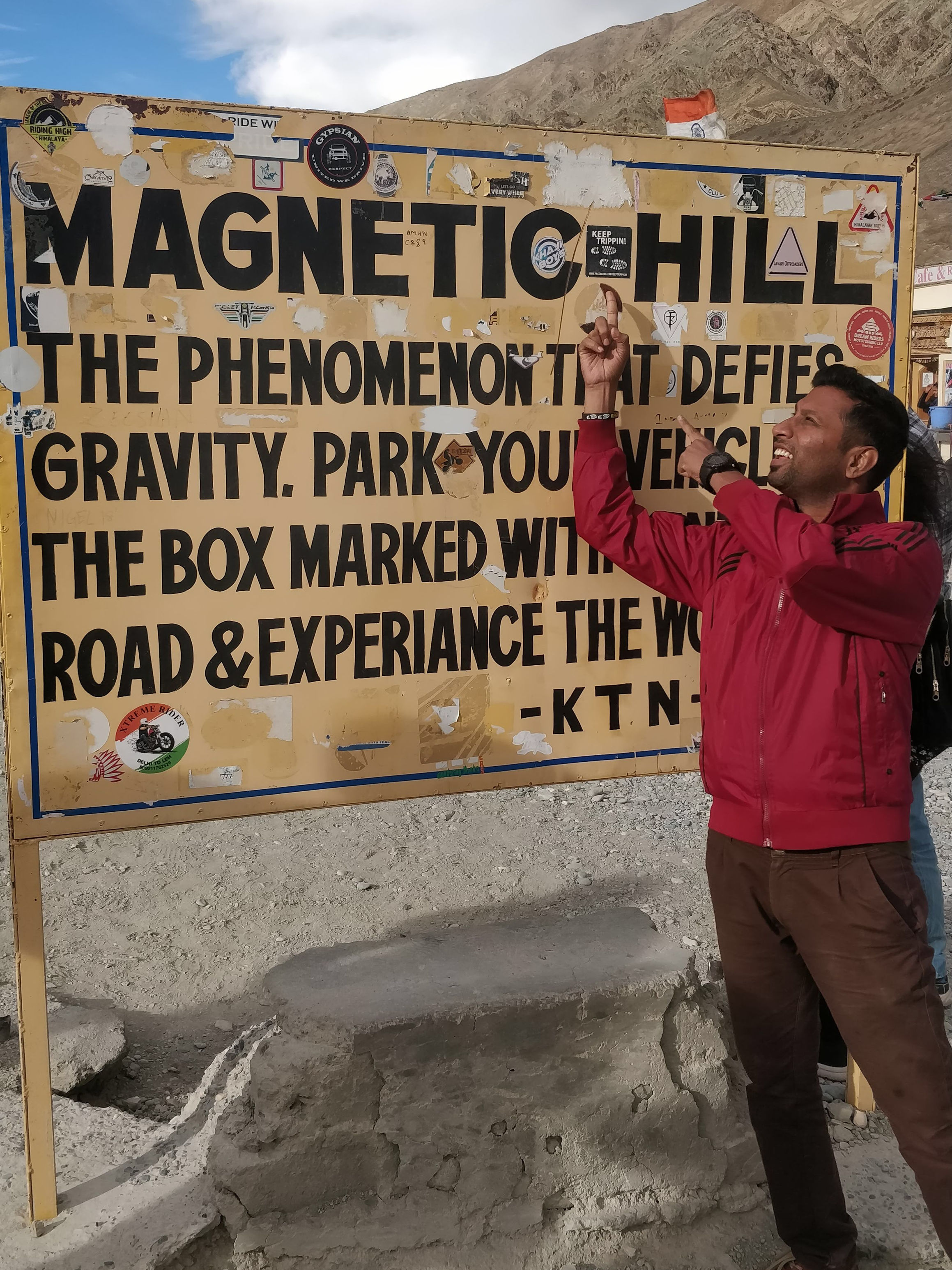 Feeling pumped up with the excitement of the Magnetic Hill, we moved towards another unique place, Sangam Point. This confluence point of the Zanskar and Indus River is absolutely stunning and a place you do not want to miss, whichever time of year you travel. A rare depiction of nature's magical nuances, there is a clear distinction between the Indus River which is a shiny blue and the Zanskar river which is dirty green. The view of the confluence is extraordinary from the top and equally captivating from the riverside. Refreshed by the beautiful surroundings, we moved on. 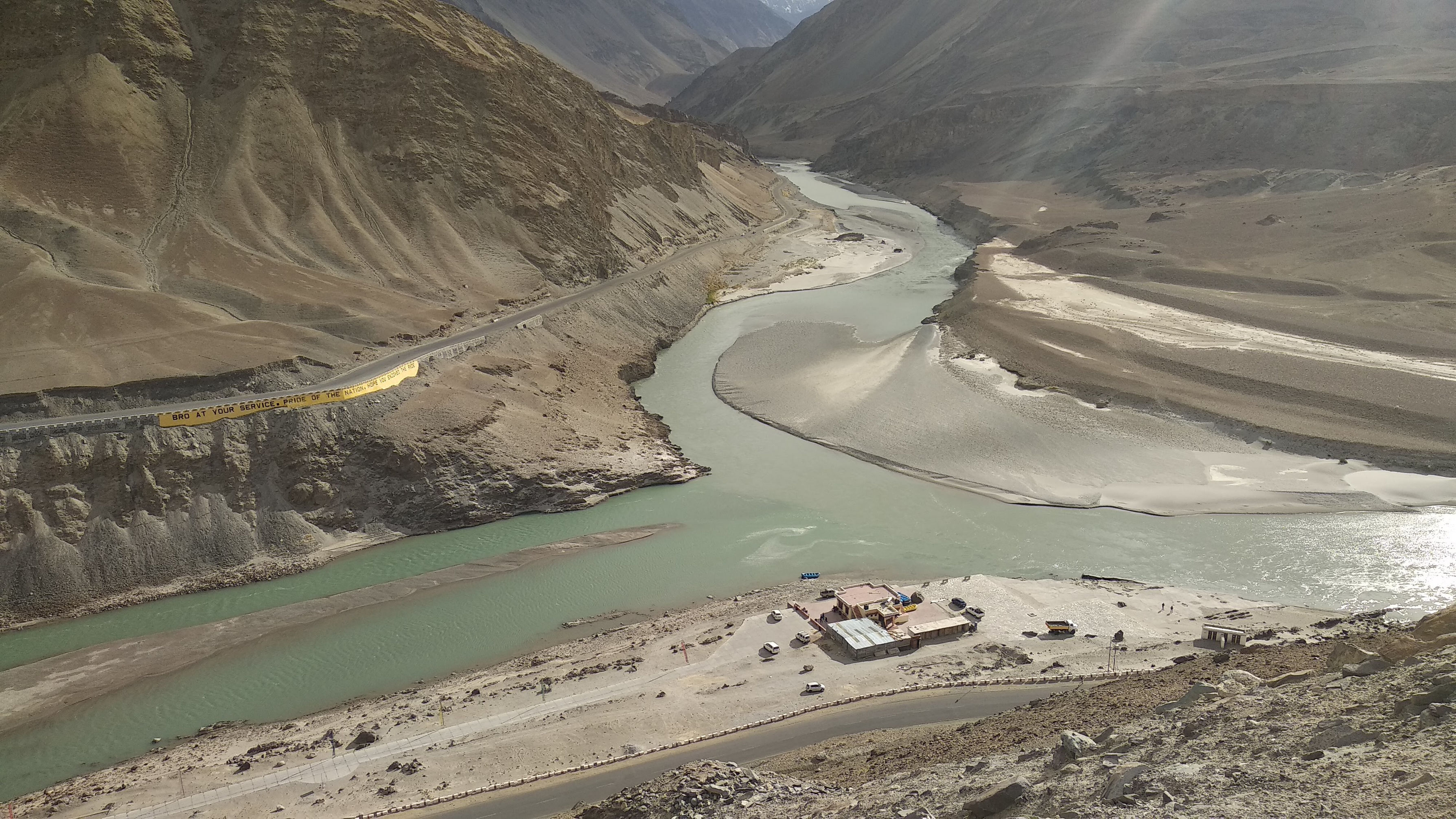 After the soothing view of Sangam Point, we drove along the beautiful landscape of Leh reaching the Hall of Fame. This museum constructed by the Indian Army evokes a feeling of pride and patriotism. The exhibits in the museum narrate the story of the bravery and courageous accomplishments of Indian soldiers. Display of weaponry and equipment used in the Kargil War highlights the power of the Indian Army. There is a beating retreat every evening followed by the national anthem. We attended this ceremony and had goosebumps. Incredible! 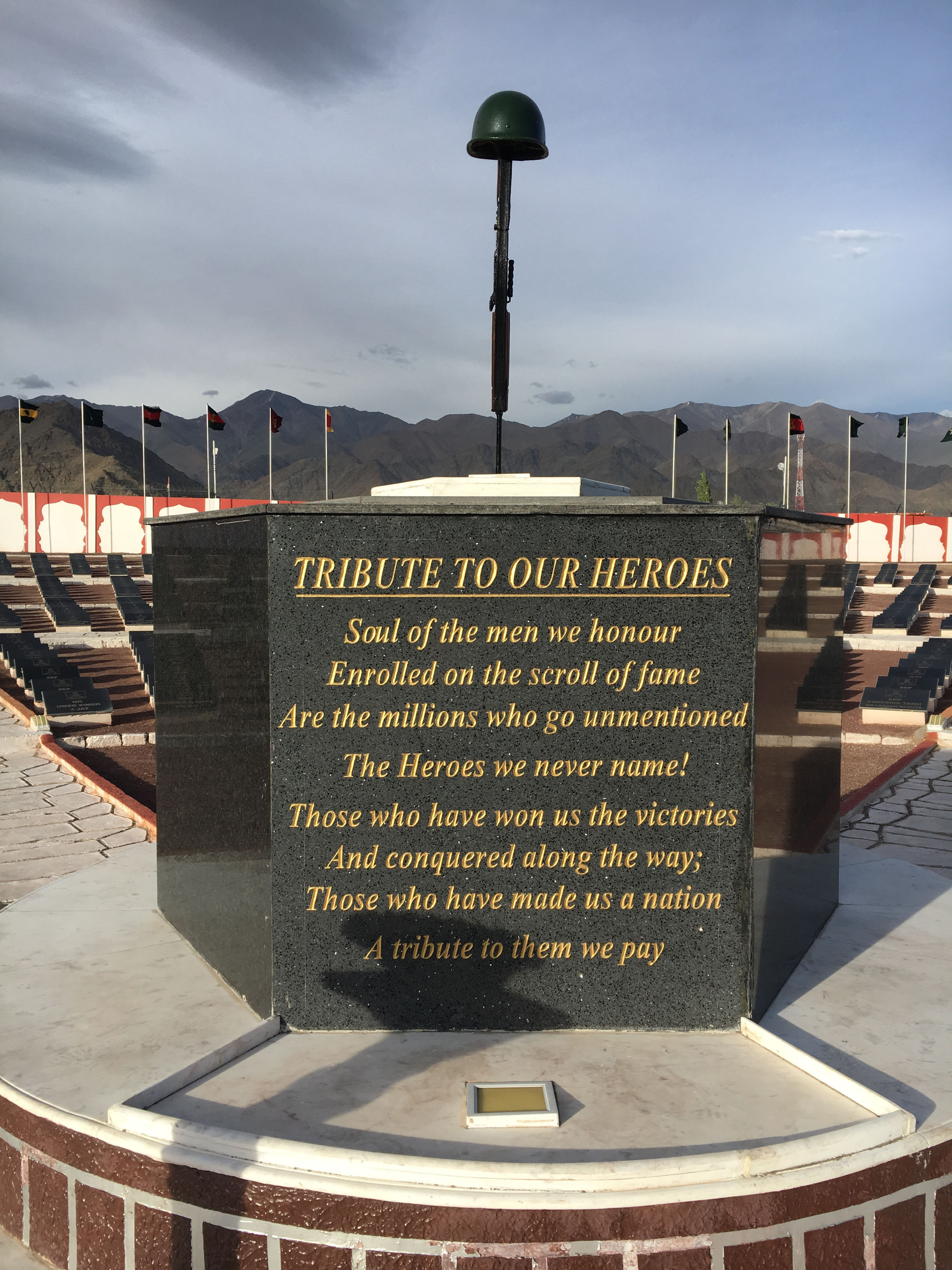 The Hall of Fame Museum in Leh; the pride of Indian Army

After the rather sombre visit to the Hall of Fame Museum, we visited the Shanti Stupa. One of the recent landmarks of Leh, Shanti Stupa is a striking white-domed Buddhist Monument constructed in 1991 jointly by Japanese and Ladhakhi Buddhists. It is built to commemorate 2,500 years of Buddhism and to promote world peace. It is at an altitude of 11,800 feet and we climbed around 500 steps to the top only to be rewarded with a spectacular view of Leh. It was the perfect end to an eventful day one in Leh where we had the most surreal view of the sunset. 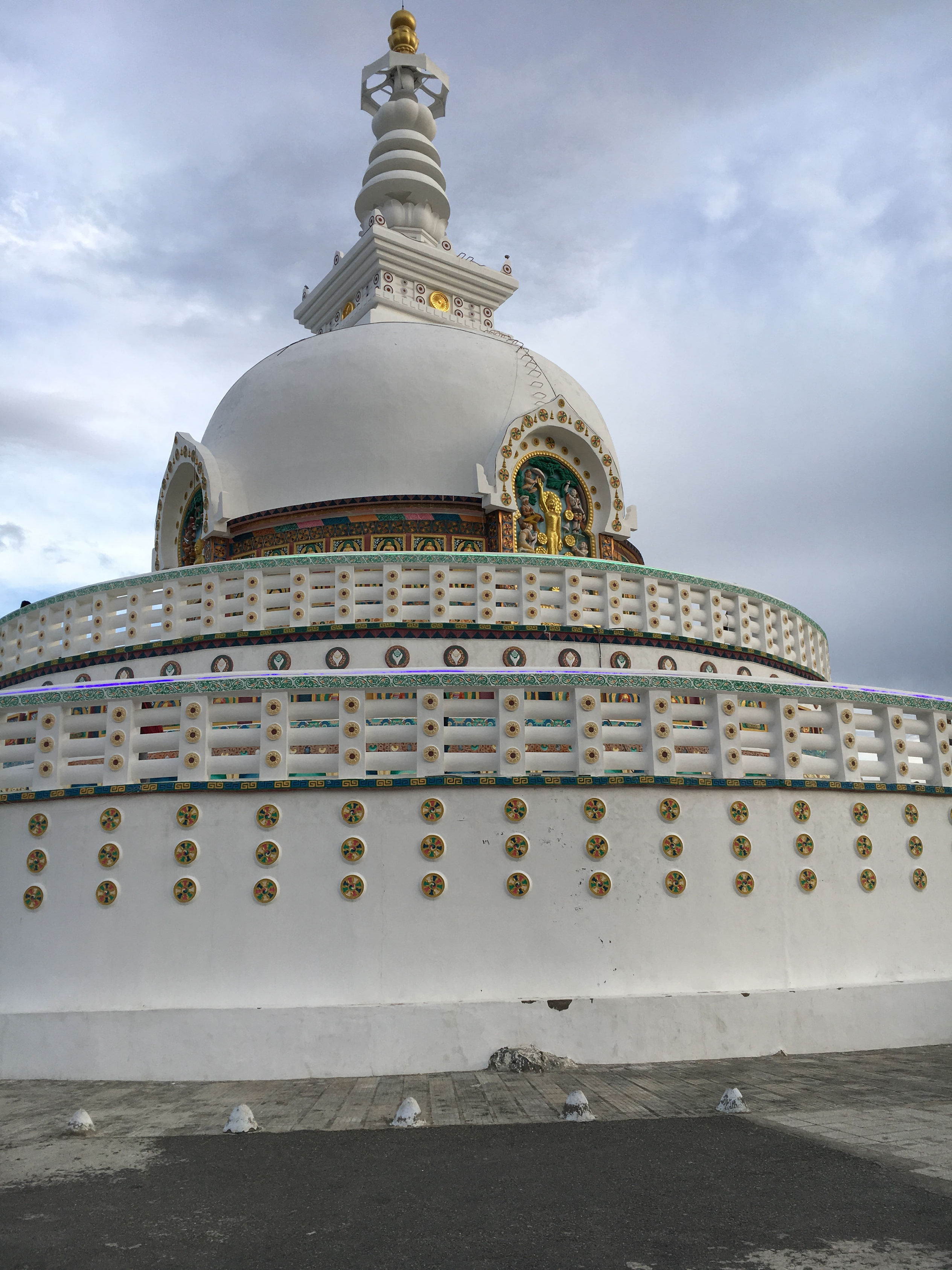 Shanti Stupa in Leh, a sacred space that holds the relics of Buddha

Mesmerized, we headed to Leh Market to chill, relax and treat ourselves to a delicious meal while reminiscing about the day and planning for the next day. The street is filled with a plethora of food options. If you are adventurous, indulge in the mouth watering variety of momos and Thukpa which is influenced by Tibetan cuisine or choose from Punjabi, Gujarati or other cuisine of your choice. For those who would like to go truly local, there is Chaang, a mildly alcoholic beer. We indulged our palates and left Leh Market satiated. Of note is that Leh Market has stores selling warm clothes and souvenirs as well. 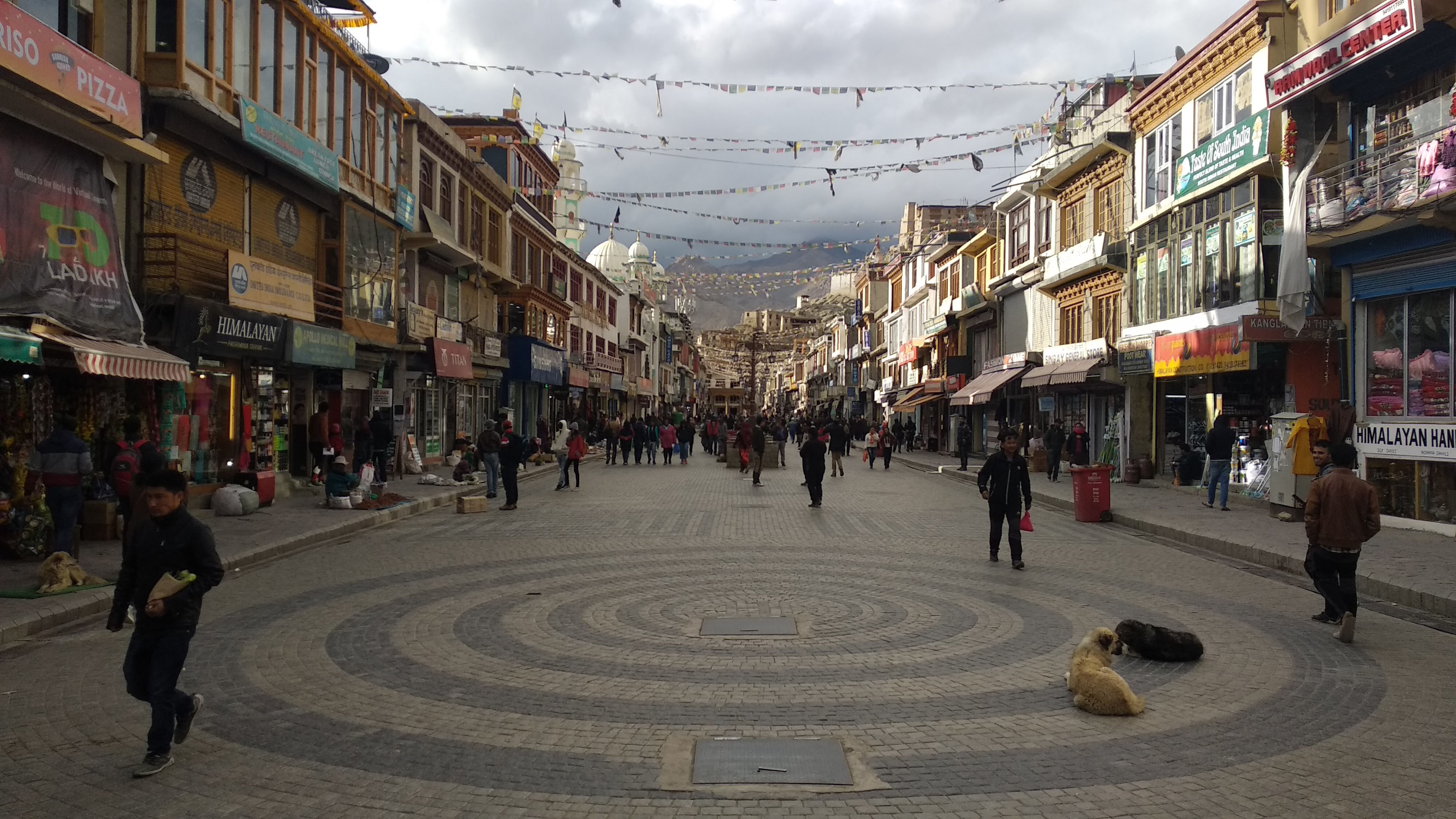 The famous Leh Market where travelers and locals relax, unwind and fuel themselves

After a restful night, we were all geared up for day two. Ladakh is synonymous with monasteries so we headed out to explore the monasteries in and around Leh. Our first stop was at Leh Palace. Built atop the deserted Tsemo Hill, this 17th century palace is a testimony of Ladakh's resplendent heritage. Also known as Lhachen Palkhar, it is one of the tallest structures in Leh. It is renovated and well maintained and is an important center of the Buddhist religion and culture. Just 5 minutes from here, is the famous Tsemo Monastery and Castle. Both these structures are seen from anywhere in Leh. Founded by King of Ladakh Tashi Namgyal in 1430 the monastery has ancient manuscripts and frescoes and a three-storey high gold statue of Maitreya Buddha.

Tsemo castle is an offbeat location and the highest point within Leh. Many people do not visit this place because it entails a small hike and taxis do not want to drive up. We got to the top and had an eagle-eye view of the entire city. 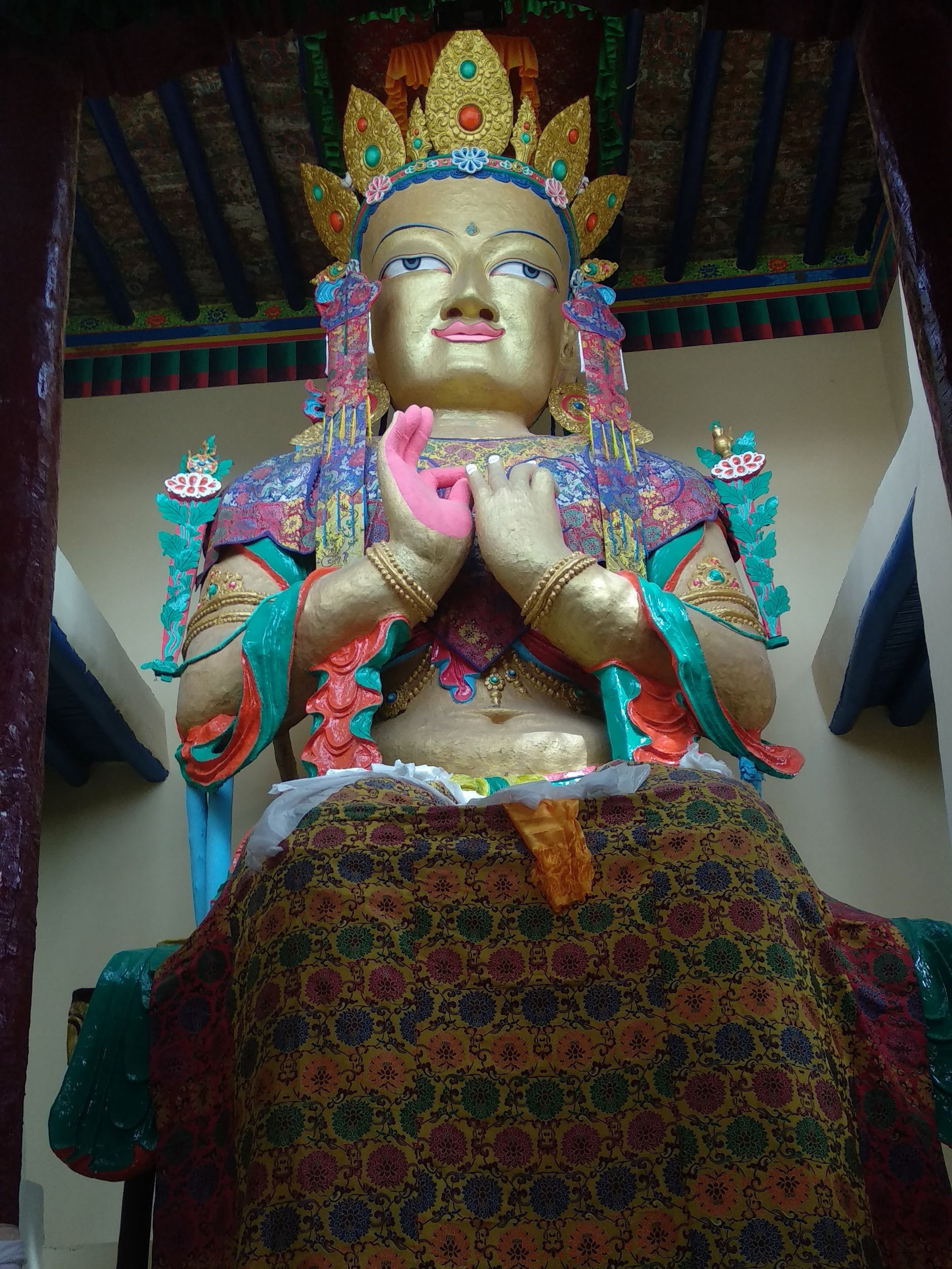 Another beautiful palace is the Shey Palace located 15 kms from Leh town. Built in the 16th Century by King Deledan Nagmyal, the palace boasts of the largest victory stupa in Leh, the top of which is made of pure gold. The royal family lived here until 1834 AD. Currently, the Shey Palace is undergoing restoration and conservation as it is pretty much in ruins. 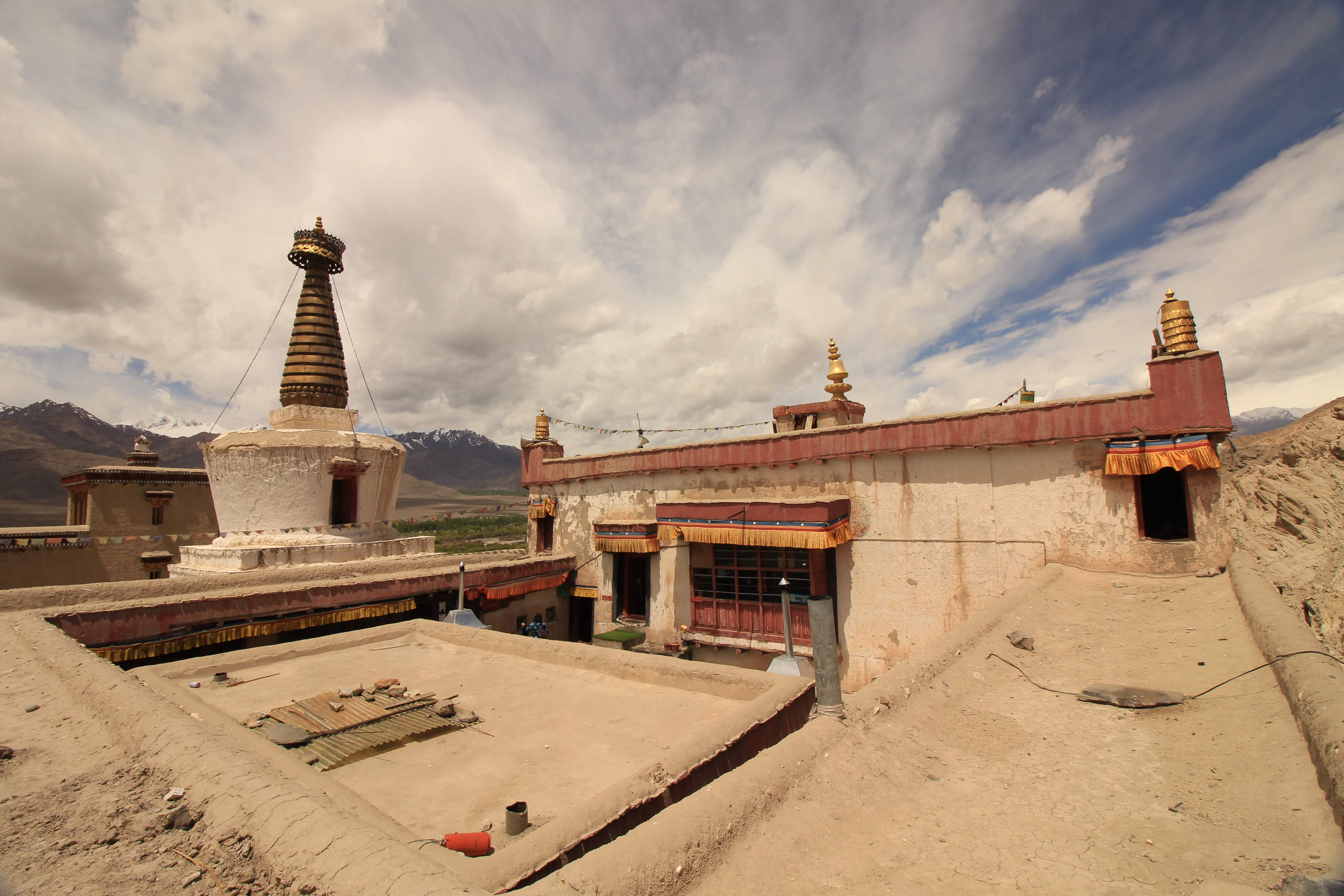 The top view of Shey Palace, one of the oldest palaces in Leh

From Shey Palace, we headed to Thikshey Monastery. Thiksey Monastery is one of my personal favorites. At a height of 11,800 feet above sea level, it is the largest Tibetan monastery in Ladakh. This 12-storey structure houses numerous stupas, statues and other Buddhist artefacts and sports a distinct style of architecture. From a distance it looks like the Kye Monastery in Spiti. We were in awe of this exquisite structure and spent a good amount of time lost in its beauty and ambience. 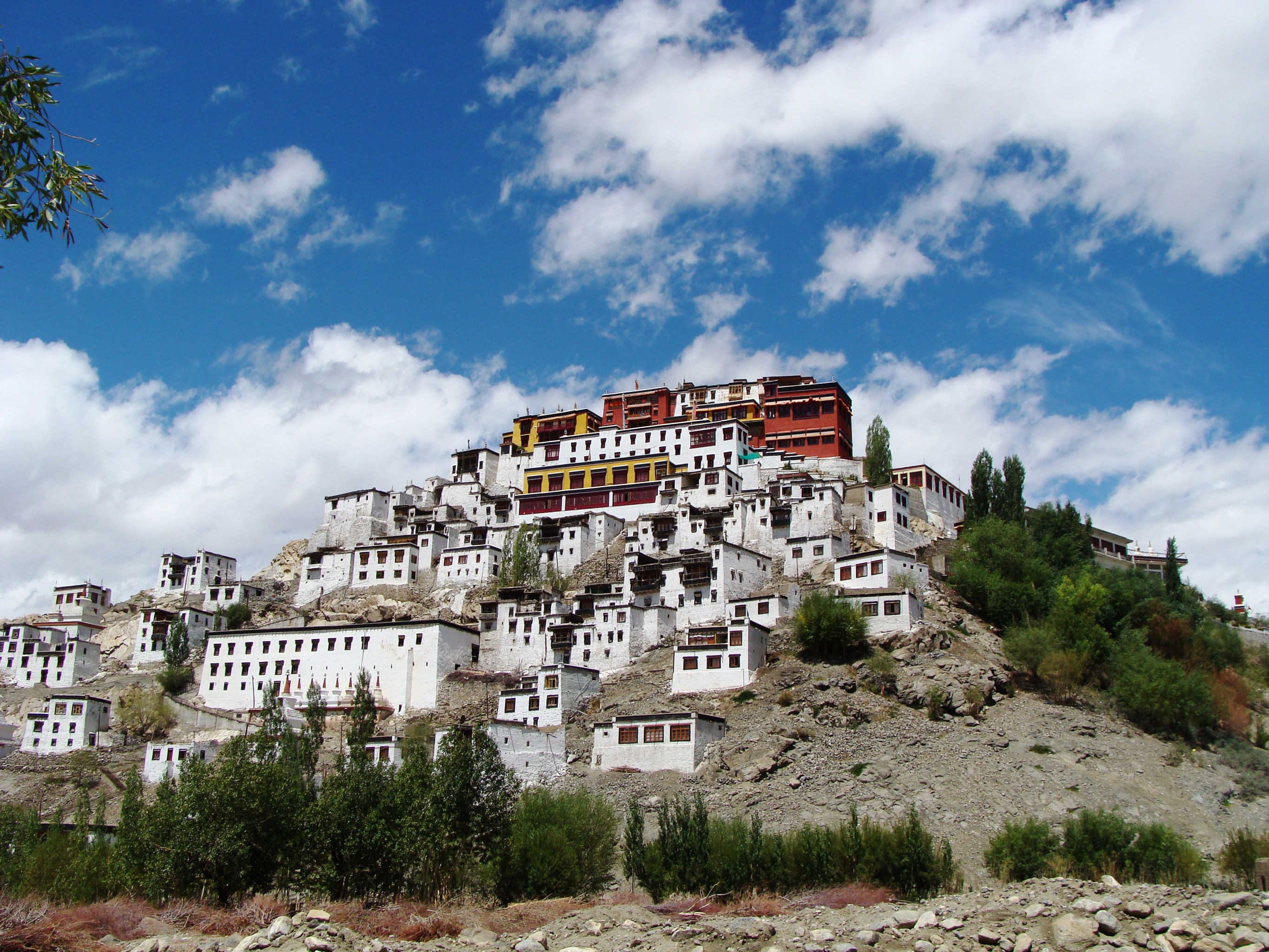 There are innumerable monasteries in Leh but each one is distinct and has its own history and significance. The day was spent indulging in these exquisite structures and imbibing all the positive vibes. Before calling it a day, we stopped at Druk Padma Karpo School popularly known as 'Rancho's School' owing to its reference in the Bollywood movie, 3 Idiots. Incidentally, we were three of us cousins, and it was only apt that we take some photos at this "famous place" to etch in our memories. Two days into our trip and we were already smitten by the cold desert of Ladakh. We returned to our hotel in anticipation of the excitement in store for us in the next phase of our trip. While you enjoy this prelude to this unique and fascinating land, I am already penning the next phase of our exciting experience. So long, until we meet again with more excitement.

The summer months from April to July are ideal to travel to Ladakh. The best time for road trips is from mid-May to October.

Ladakh with its innumerable monasteries offers tourists numerous options to explore the culture of this land. Being hugely influenced by Tibet, it is very evident in the architecture of structures and houses.

Ladakh has a huge Tibetan influence which is seen in their cuisine. A variety of momos and Thukpa are synonymous to Ladakh. Cuisine from across the country is also available due to the influx of tourists.

When traveling to Ladakh, be aware of AMS (acute mountain sickness) and ensure that you take all the precautions necessary. It is recommended to carry Diamox, which is a medication used to treat AMS, of course in consultation with your physician.

There are numerous options to indulge in offbeat activities. From hiking and trekking to camping, the opportunities are extensive.

Comfortable clothes and shoes, woolens, and first aid kit is a must while packing for a trip to Ladakh.