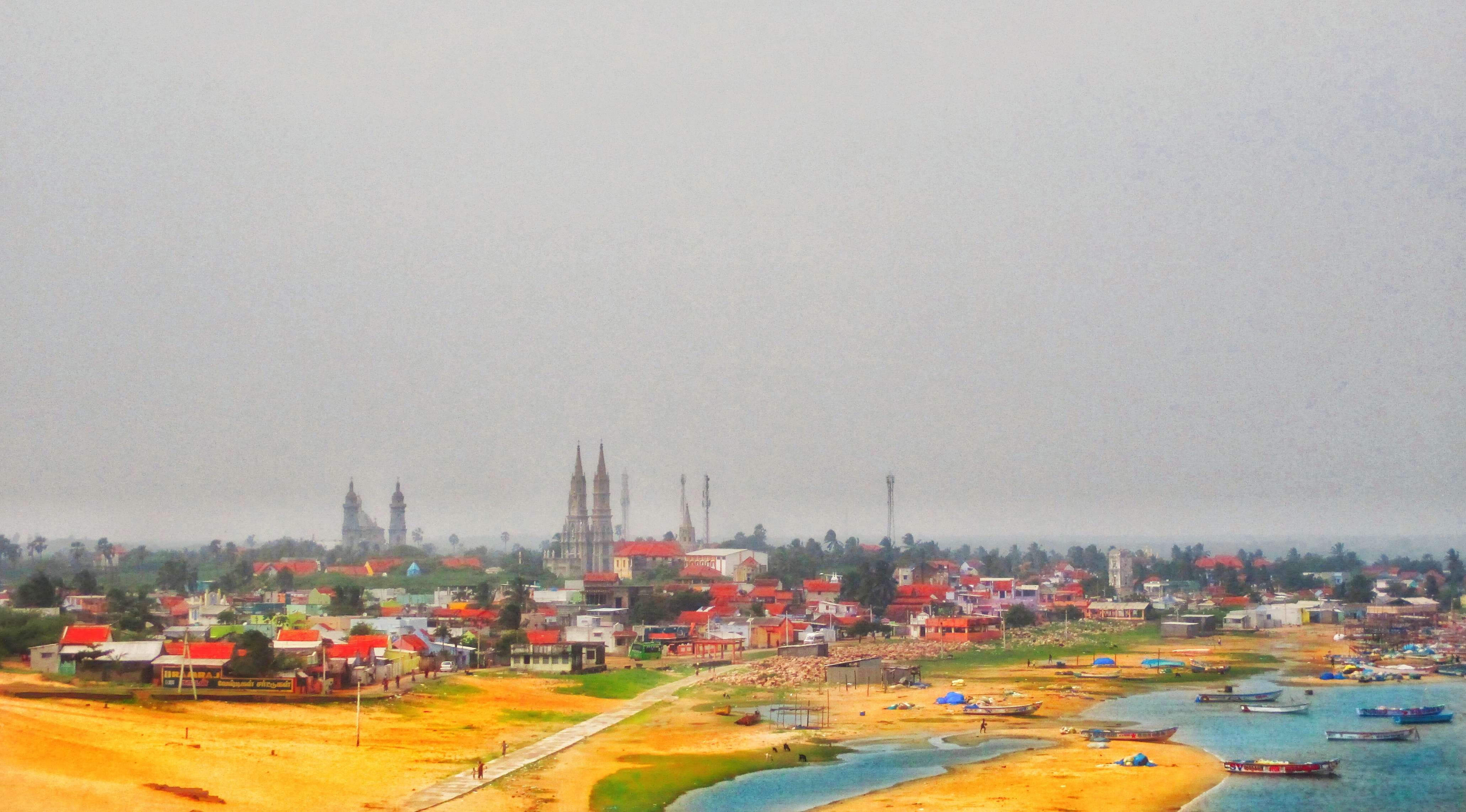 It was Christmas vacation. As a norm, we avoid traveling during peak seasons, but this was an exception; taking 3 days leave meant a 11-day break that we had to utilize. So we decided to do a road trip with our family friends and headed to our favorite South India destination, Tamil Nadu. The infrastructure in Tamil Nadu is excellent for a road trip with spectacular landscape. We drove more than 2,000 kilometers and mostly stayed in the coastal belt of Tamil Nadu. Well, you must wonder what’s so special in this belt, it is a haven for pilgrims with numerous temples. That’s what we also thought but we discovered another side to the coastal area. We covered three coastal towns on our journey starting from Rameswaram to Manapad and lastly Kanyakumari.

It was a long journey from Bangalore to Rameswaram. We started in the afternoon and drove 400 kilometers reaching Dindigul, more than half way and stayed there for the night. It is an excellent 4-lane highway for the entire journey. After a rested night, we set out early morning reaching Rameswaram after a 250-kilometer drive. We stayed in Kathadi, a tiny village just before the actual town of Rameswaram. It is quite interior and facing the Indian Ocean with a private beach. Kathadi in Tamil means Kite and this place is famous for kiteboarding as it is windy here for almost 9 months in a year. It is a serene place in a coconut orchard with a sandy beach and the blue ocean. 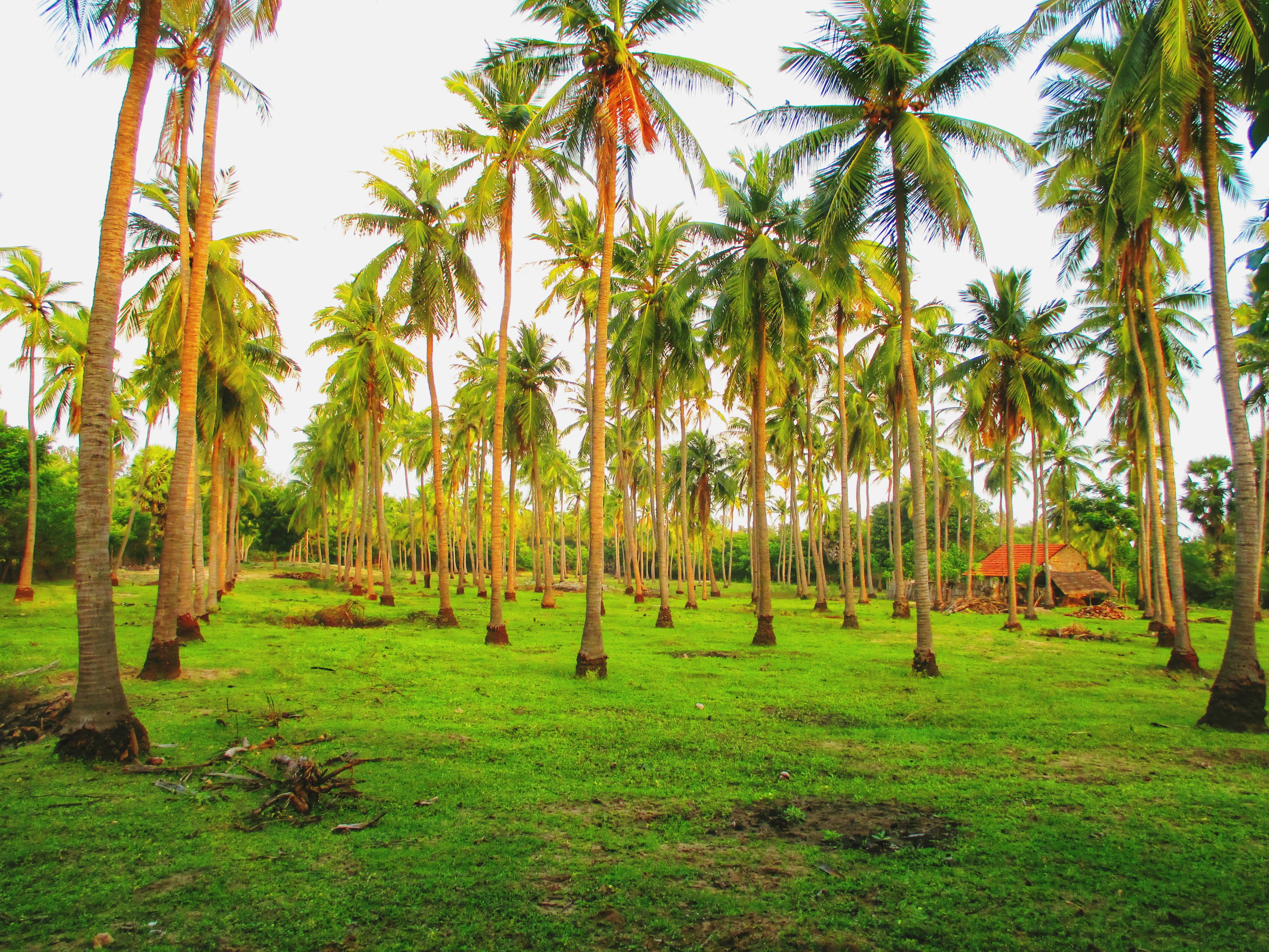 The highlight of our 3-day stay here was kayaking in the channel as deep as 30 meters. Our group set out in an individual kayak accompanied by a guide and the destination was a small island across the ocean about 2 nautical miles (3.5 kilometers) away. Midway it started drizzling and by the time we reached the island it started pouring. While it was a fun experience, the rapidly changing weather brought waves on our return which made maneuvering difficult. Some of the kayaks had to be towed with the rope tied to the rescue boat. We reached the shore 2 hours later after a thrilling experience kayaking in middle of the ocean. Later, we spent a relaxed time on the beach swimming in the ocean. All this activity built our appetite and we were coincidentally called for lunch. 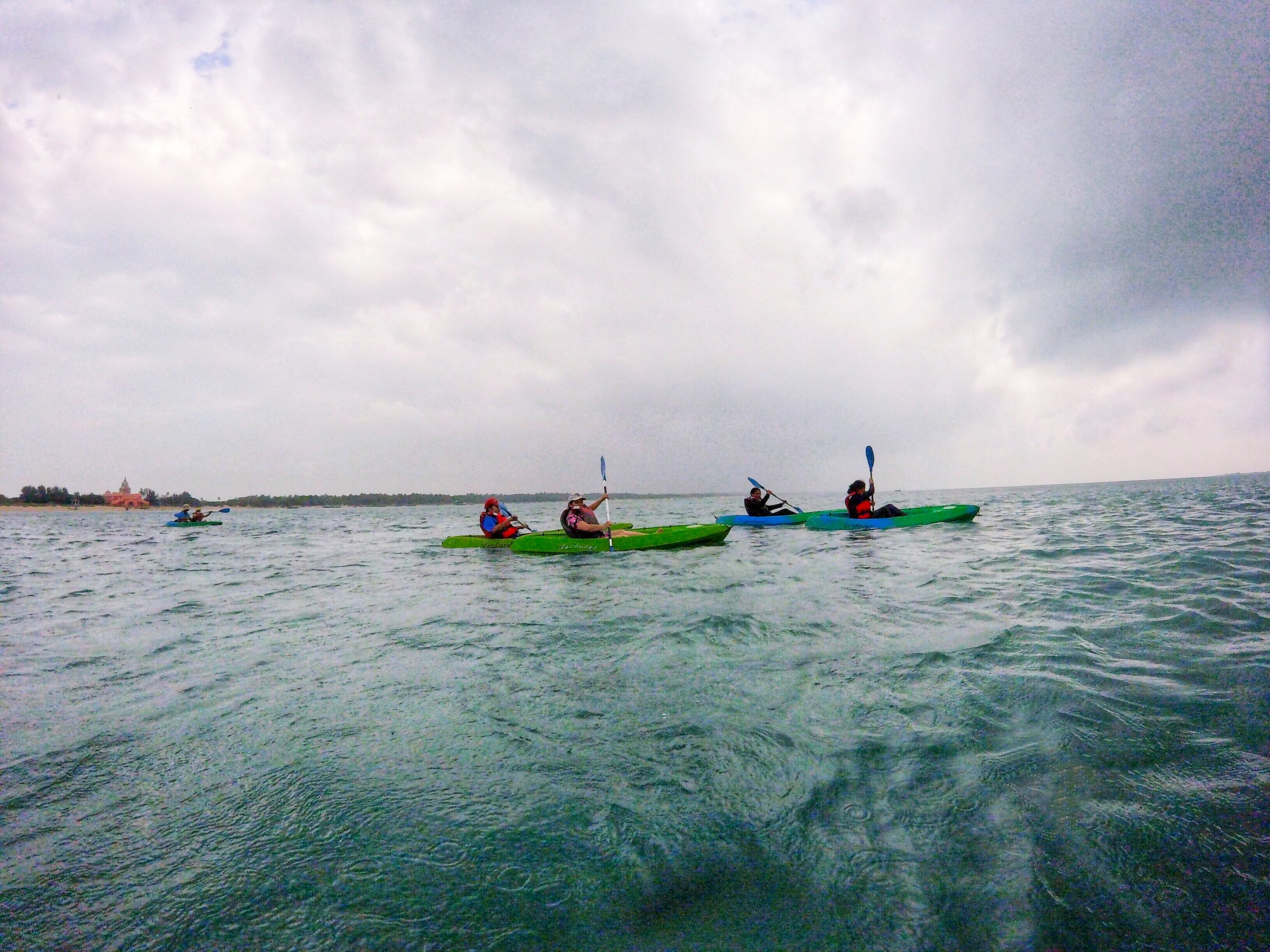 Kayaking in the Gulf of Mannar while its drizzling.

Rameswaram is located on Pamban Island that is connected to the mainland through 2.3 kilometers long Pamban Bridge, the longest in India over a bay. Rameswaram is also connected by the historic rail bridge built in 1914 that is 2 kilometers long. It is an engineering marvel built during the British rule and designed by a German engineer. A train journey on the bridge is a true delight. The bridge opens at 70 degree angle once a week to allow ship movement. Plan your trip accordingly to see this amazing sight. Rameswaram is one of the most important pilgrimage places for Hindus who visit the Ramanathaswamy temple that is one of the 12 Jyotirlingas where Lord Shiva is worshipped in the form of Pillar of Light. It is also one of the four divine sites for Hindus, known as char dham. You are not allowed to carry any electronic items including mobile, camera, etc. while visiting the temple. 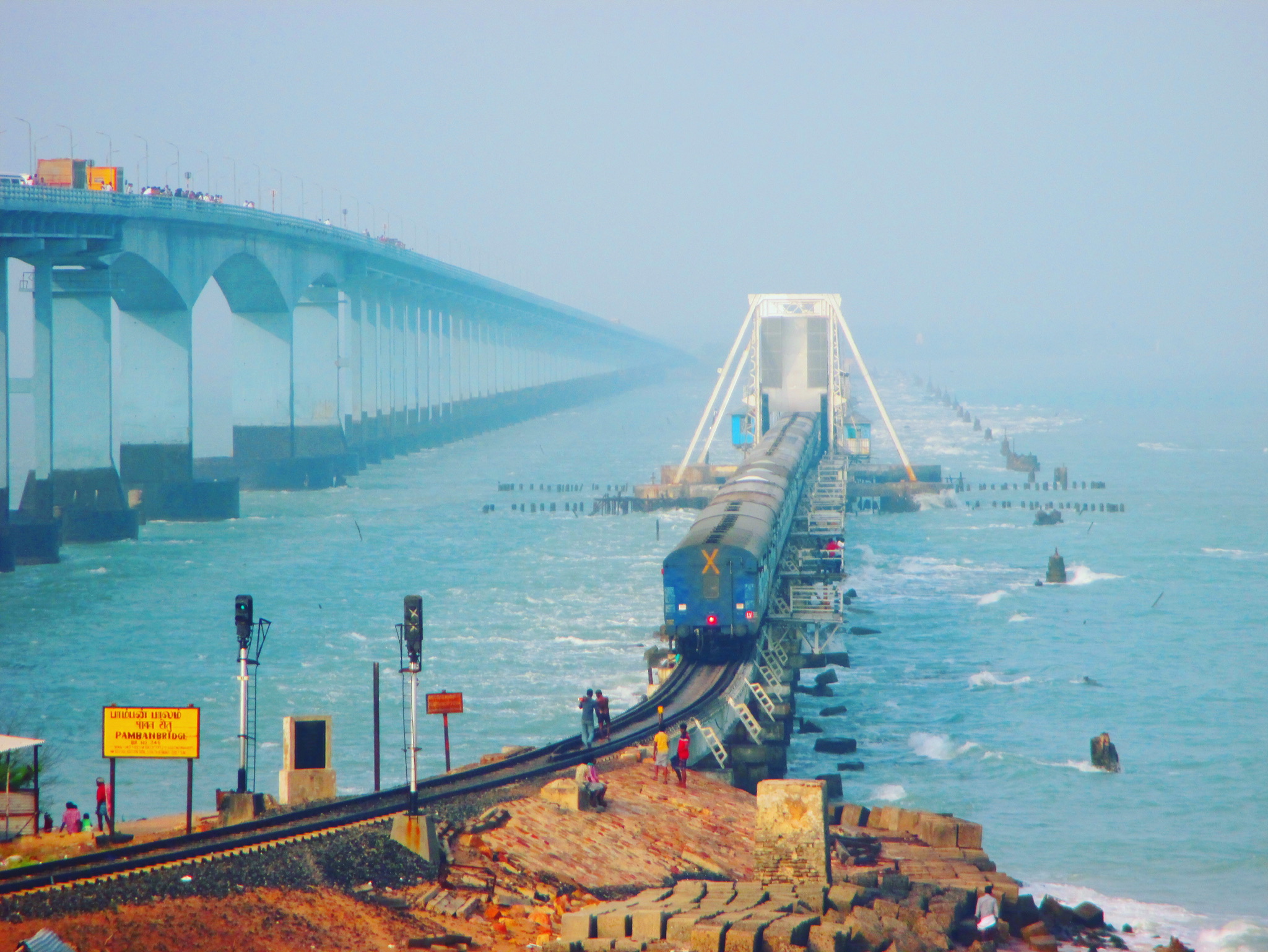 Train passes through the historical Pamban Bridge on a misty morning.

The railway line through Pamban Bridge goes until Dhanushkodi, the tip of the Pamban Island. After the cyclone of 1964, the entire city was marooned killing 1,800 people including 115 passengers on board the Pamban-Dhanushkodi passenger train. Today you can visit Dhanushkodi, which is a ghost town with remains of the railway station, church and houses. Now, the bridge construction between Rameswaram and Dhanushkodi is complete and motorable, which was not the case when we went. We had two options, walk about 5 kilometers on a partly constructed bridge or take a 20-minute bus ride passing through the sea. Check out the video to believe it, a thrilling experience that travelers are going to miss on this journey. This is the town where you can witness confluence of seas, the Bay of Bengal and the Indian Ocean. As per Hindu mythology, Rama Setu was built over the sea from Dhanushkodi to Lanka (currently, Sri Lanka) by Lord Rama and his Ape warriors. Also known as Adams Bridge, is a chain of limestone shoals floating on the water.

Bus ride within seawater to Dhanushkodi, a memorable adventure.

There is a Swami Vivekananda memorial at Kunthukal beach shore. This stunning orange colored structure houses a museum and an aquarium. The tranquility of this place is surreal. From here, we continued our journey further south to our next destination Manapad. A tiny fishing hamlet ingrained in history and natural splendor , this city boasts of European influence with colorful houses and is a surfers paradise. The gas station owner, where we stopped to fill fuel was surprised to hear that we were holidaying in Manapad. He had never seen a non-local tourist going to Manapad. History reveals that a Portuguese vessel sailing around Cape of Good Hope in 1540 encountered a violent storm leaving it at risk of foundering. The captain implored Jesus Christ for the safety of the vessel. On reaching the shore safely, he built a Cross from the ships splintered mast and planted it on the shore. 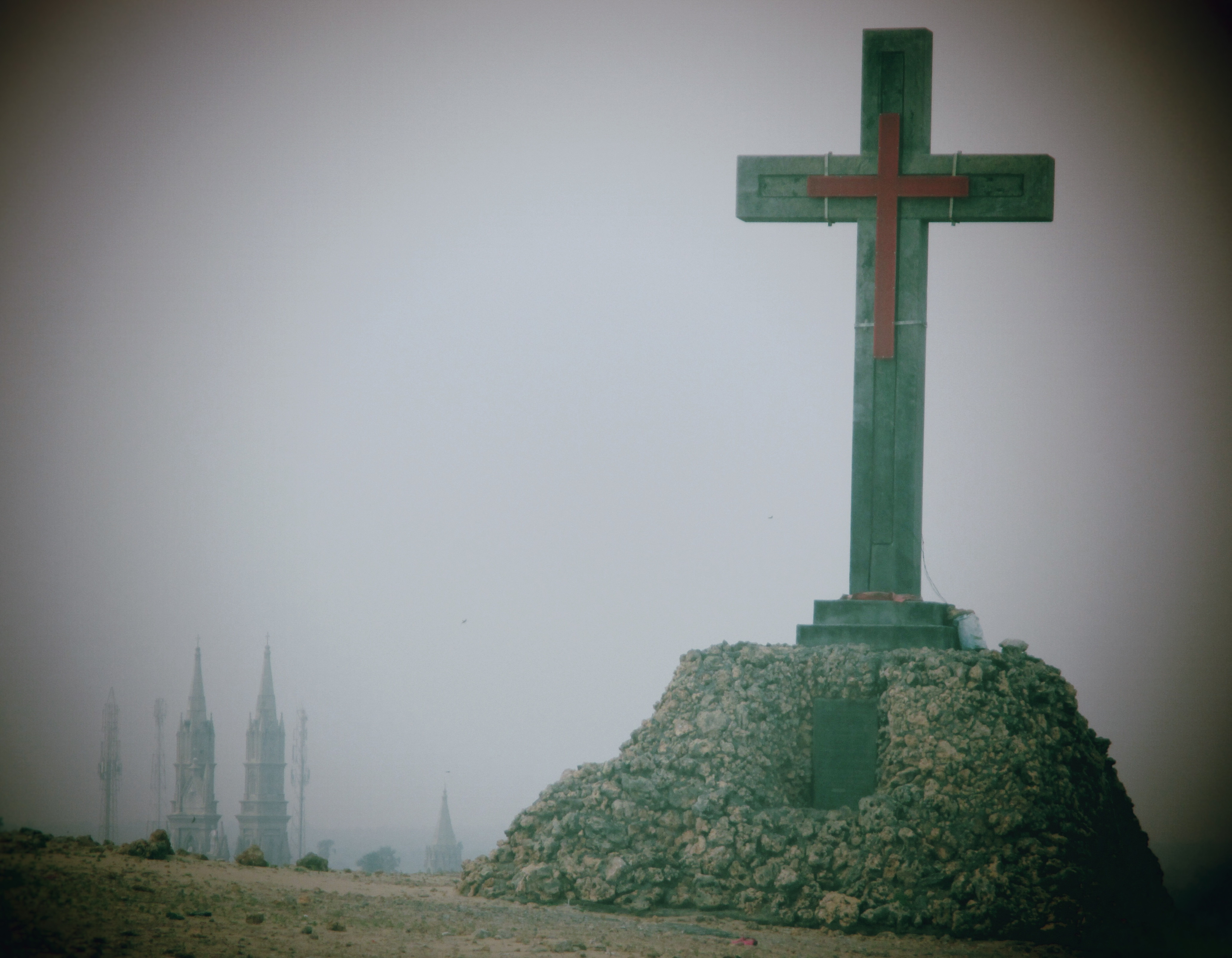 Holy Cross planted on the hillock of Manapad as vowed by surviving ships Captain.

During the 20th century businessmen from this small village had traveled to Europe and returned with the knowledge of European architecture and design. Todays Manapad boasts of exquisite churches, mansions, smart town planning and even planting of trees. This is testimony of early generations adopting the artistic flavor of European culture and architecture. The moment you enter Manapad from the highway you feel that you have arrived at a uniquely distinct place, a small nerdy village with mostly laid-back people. There were no hotels or restaurants whatsoever including small tea stalls common in Indian villages. There was no pharmacy either; we had to drive 20 kilometers to buy medicines. In this unexplored city, one is surrounded by pristine nature, large mansions mostly abandoned and beautiful churches. 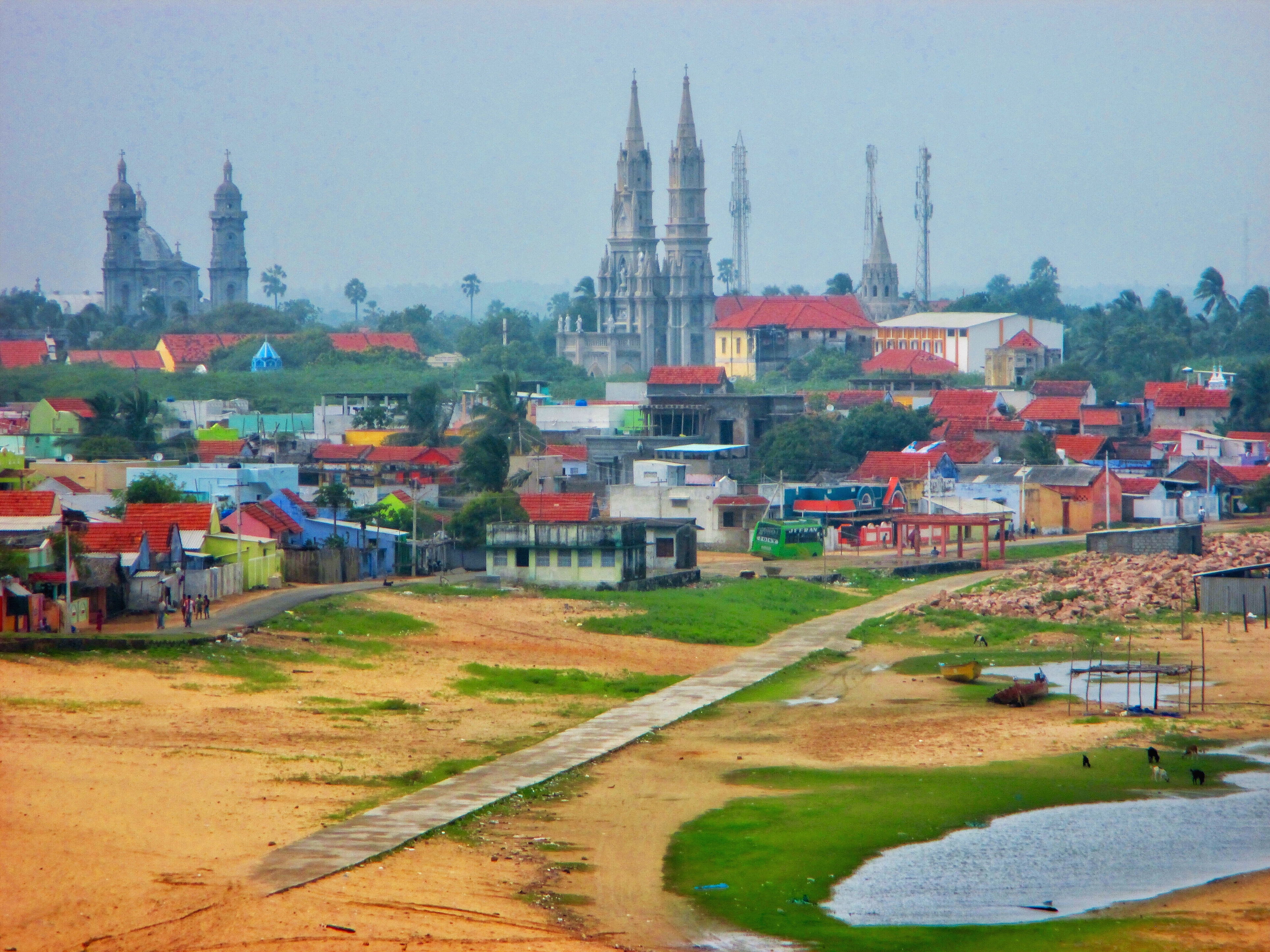 Picturesque Manapad with exquisite churches in the middle of colorful houses.

We planned a 3-day stay in this city. The plan was to chill, laze around and enjoy the beauty of a secluded town. We just roamed around in our cars and explored the tiny village. We attended the Christmas celebrations in the church. Our favorite place was the Holy Cross Church up on the hill, a vantage point for a beautiful view of the Lagoon and the beach. We used to go there twice daily. The morning stroll along the long beachfront while watching the fishermen return with their catch was sight of the day. Our stay here was refreshing, rejuvenating and more enjoyable than we expected. 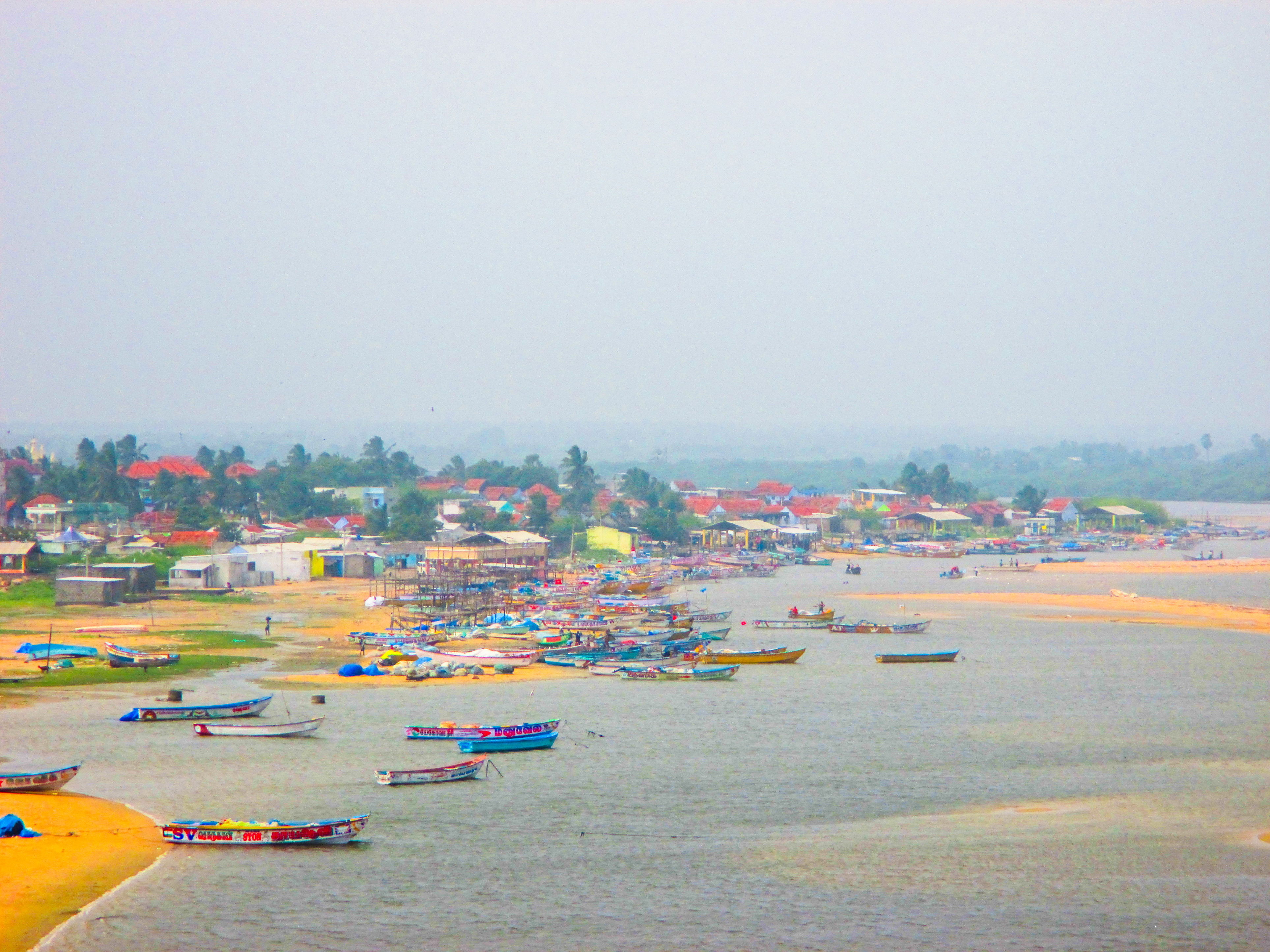 Misty morning at Manapad Lagoon with fishermens boats anchored all over.

It was time to move to our last destination and we reluctantly left this quaint, mesmerizing town. It was a 2-hour drive on narrow internal roads parallel to Bay of Bengal to Kanyakumari, the southernmost point of Indian peninsula. The small town surrounded by mountains and bordered by seashores is a place of confluence of Bay of Bengal, Arabian Sea and Indian Ocean. Unfortunately, the pollution has blurred the different colors of water and they have put up a flag indicating the point of confluence. Kanyakumari is a famous Hindu pilgrim location. A small island rock where the famous Indian Monk Swami Vivekananda meditated for 3 days in 1892 and took the resolution to dedicate his life to serve humanity is also an interesting location. 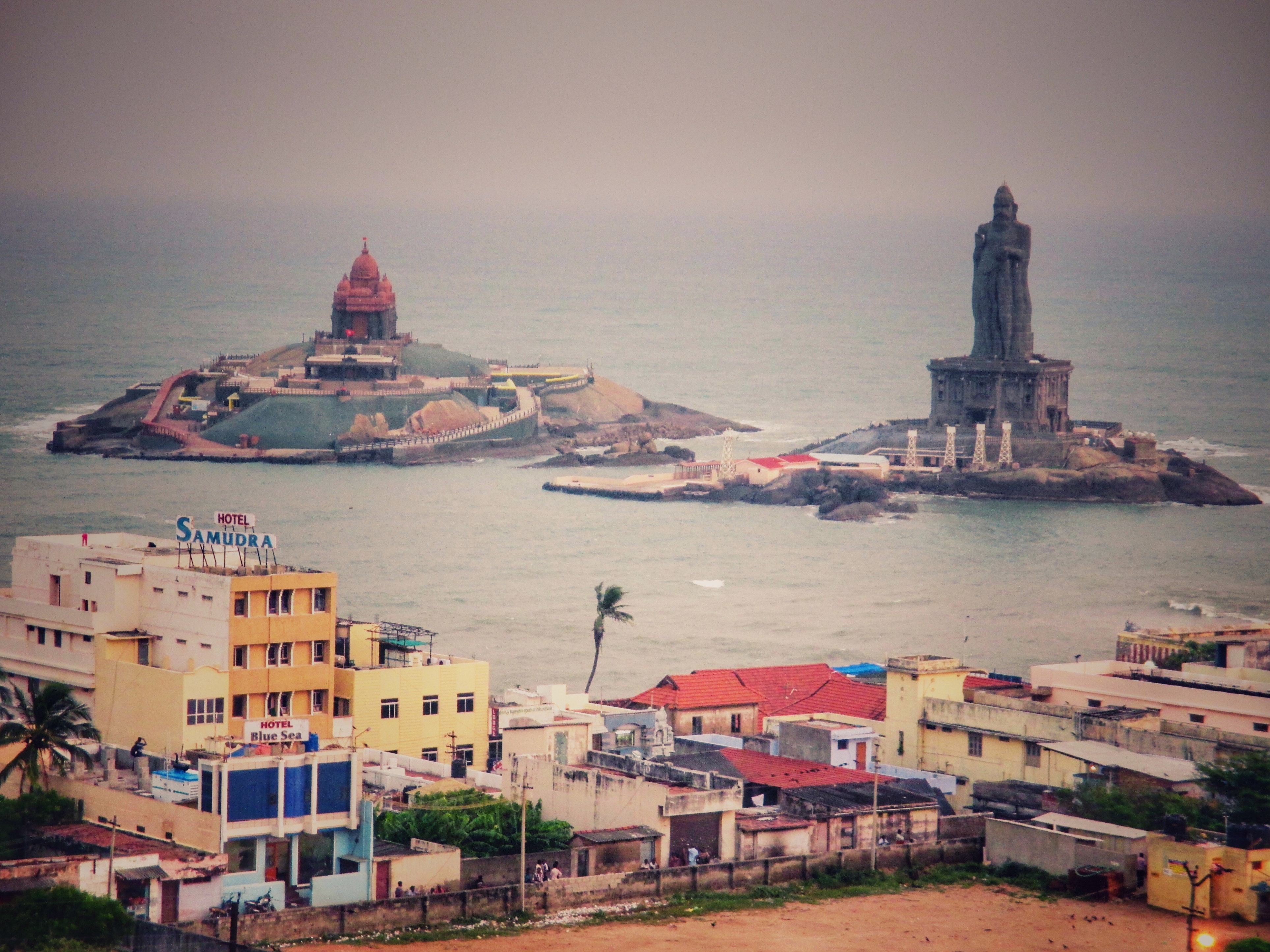 View from the top: Vivekananda Rock Memorial and the statue of Thiruvalluvar.

The ocean in Kanyakumari is unpredictable with unsafe tide during rainy season. A 5-min ferry takes you to Vivekananda Rock Memorial, which is terminated during unsuitable weather. Being peak season, we decided to visit the island first thing on arrival. After 2-hours in queue we reached the island following a rough boat ride owing to large waves. On reaching, we walked around the serene island absorbing the beauty and calmness of the place. You can also go inside the meditation room to meditate. The neighboring rock houses 130 feet tall stone sculpture of famous poet and philosopher, Thiruvalluvar. We wanted to spend more time here, but the announcement that the sea was getting rough and unsafe forced us to leave. The entire rock memorial is well lit in the evening and a site not to be missed. Since the memorial closes early, you can station yourself on the Church Road to get an excellent view of the rock. 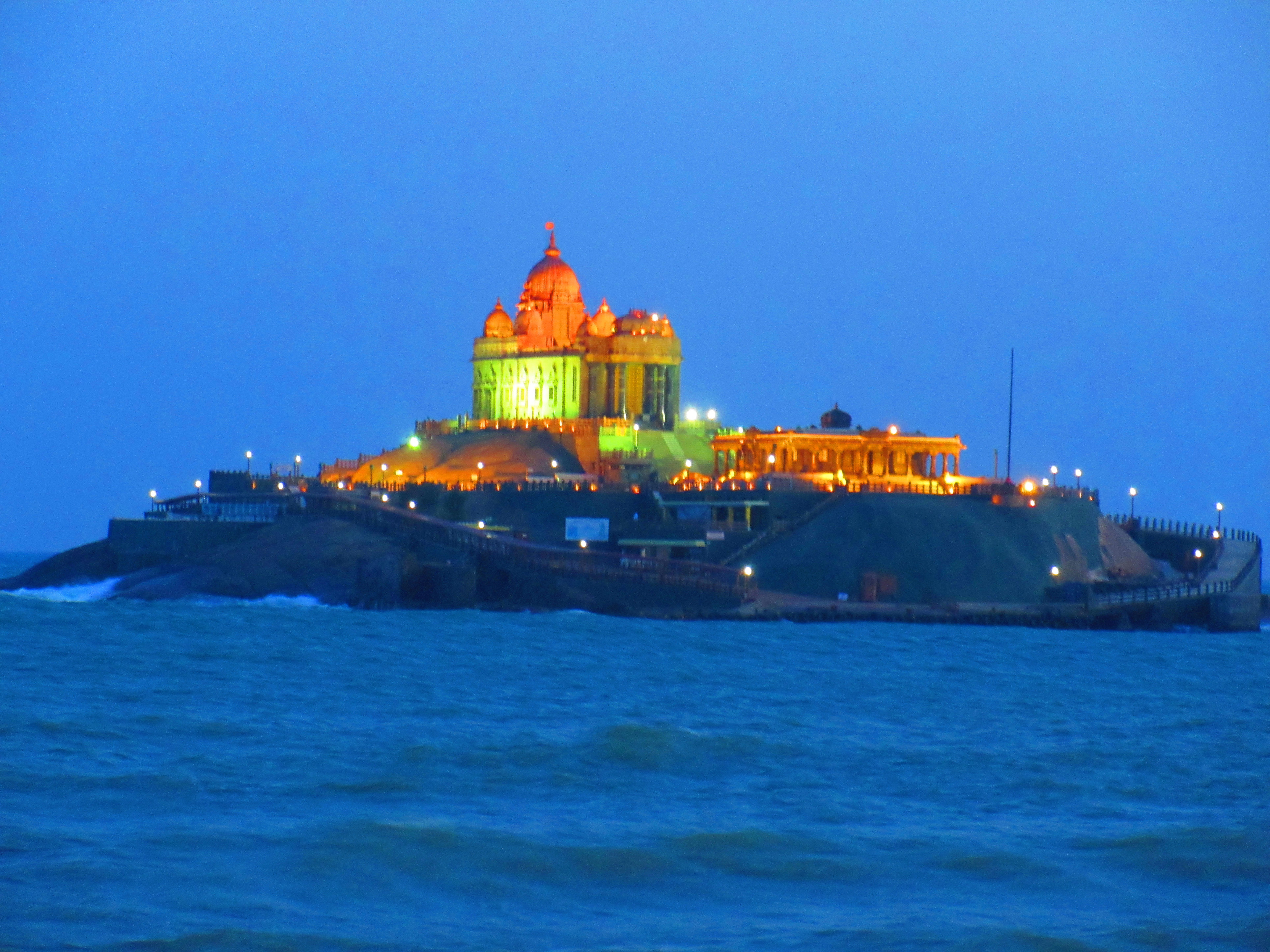 Vivekananda Rock Memorial lit up during the late evening.

Enjoy a stroll along the sea in the evening and visit beautiful churches in Kanyakumari. For the religiously inclined, the temples of Shri Bhagavathy and Kanyakumari Devi as well as a dip in the place of confluence is recommended. Kanyakumari being the tip of Southern India is famous for breathtaking sunrise and sunset. Choose between the Church Road and a spot behind the temples for an ideal view. If you are an avid photographer, visit the Vivekananda Rock Memorial in the early morning and late afternoon, which I did. 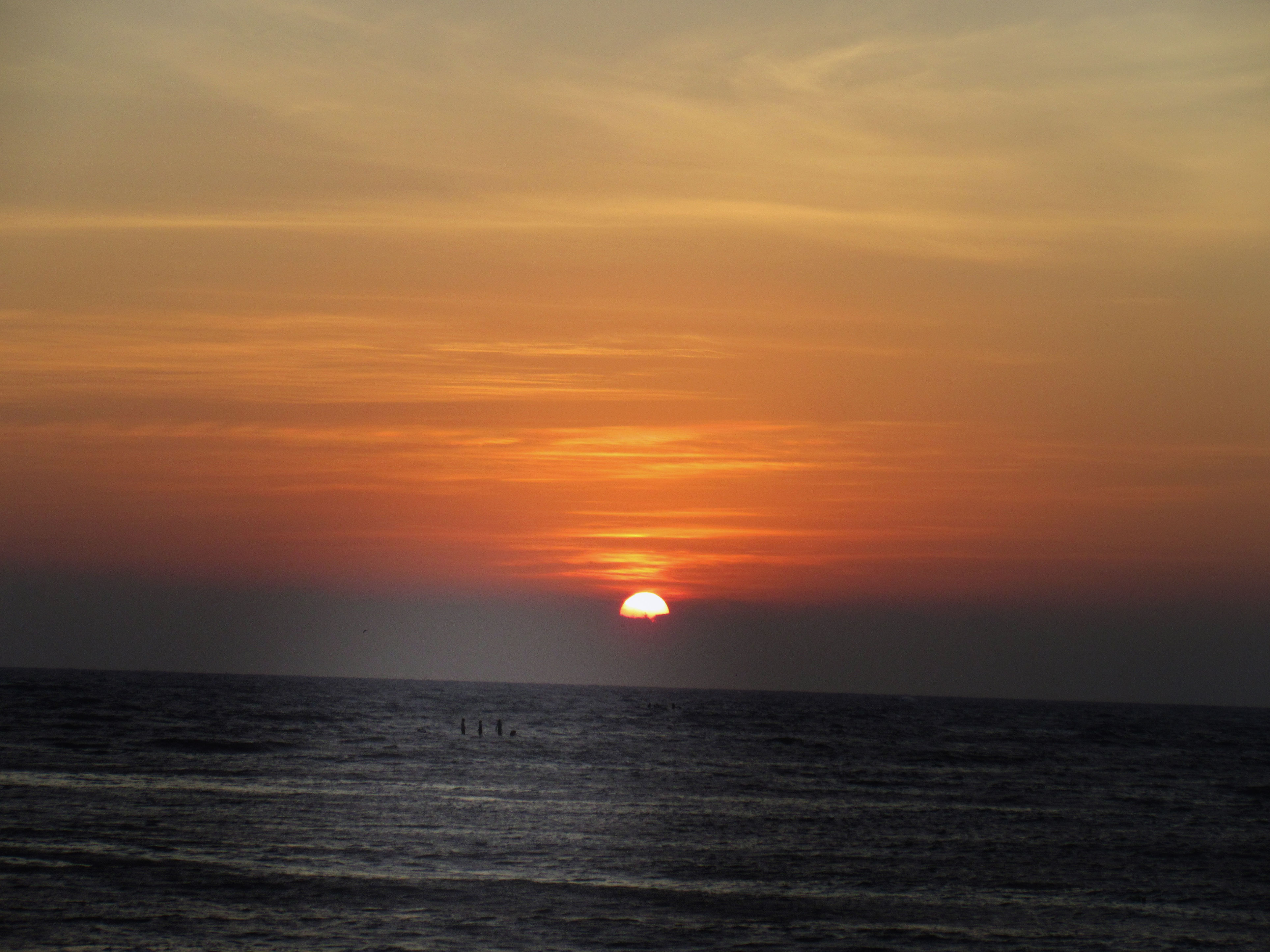 Sunrise at Kanyakumari as seen from Church Road.

Gathering our belongings and beautiful experiences, we set out on a 700-kilometer long drive back to Bangalore. The first hour on the 4-lane highway offers a picturesque landscape of wind farms on either side of the road with a torrent of windmills as far as your eyes can see. Manapad boasts of European influence with colorful houses and is a surfer’s paradise.

Kanyakumari, the southernmost point of Indian peninsula is known for confluence of three oceans.

Vivekananda Rock Memorial and the statue of Thiruvalluvar on a small island near Kanyakumari.

November to February is the best time to visit Tamil Nadu, which is hot and humid during rest of the year. However, it rains incessantly in November and December in the coastal region.

The culture in the coastal area is laid-back especially further south. Not all the people are well-versed with English and rarely speak Hindi but it’s still manageable. The region boasts of some of the best-architected temples and churches.

South Indian cuisine is what you get in most of the places with special varieties of Chettinad flavors that include spicy non-vegetarian dishes. Since it is a coastal area seafood is abundant. These are mostly religious places so alcohol may not be easily available or served.

These places are quite safe for tourists as proper law and order is maintained throughout the region. You need to ensure proper safety measures while indulging in adventure sports. Avoid swimming at secluded beaches.

Stay away from the main towns and cities and venture a bit interior to experience the real nature and hidden gems. One of them is Manapad, a small village nowhere in the tourist circuit.

It is customary to leave your footwear outside and dress appropriately while entering the temples. Many temples do not allow photography inside so check the warnings. Religious places are crowded most of the time. Beware of touts offering you packages and cheap deals.