A country like Bhutan is perfect to feed the wanderlust in intrepid travelers. I have been living here for over a year now and have been smitten by many unusual attractions in Bhutan. Every chance I get to explore this mystical land, I grab with open arms. While the entire country offers the most spectacular landscapes and mind blowing vistas, there are some places that allure travelers over and over again. One such place is Dochula Pass, one of the highest passes in Bhutan.

While this intriguing country is on most adventurous travelers' bucket list, few get the opportunity to live here and experience this country across various seasons of the year. I have been one of the lucky ones to live here for a long period of time. My first road trip to Bhutan many years ago was the beginning of my rendezvous with this country. Now, living here, I have done several trips across Eastern Bhutan and other lesser known regions of Bhutan. I have seen the splendor of this gorgeous landscape across seasons and it is truly an incredible experience. In all my travels, one place that I have always stopped at en route is Dochula Pass, a place with inspiring history and out-of-this-world vistas. 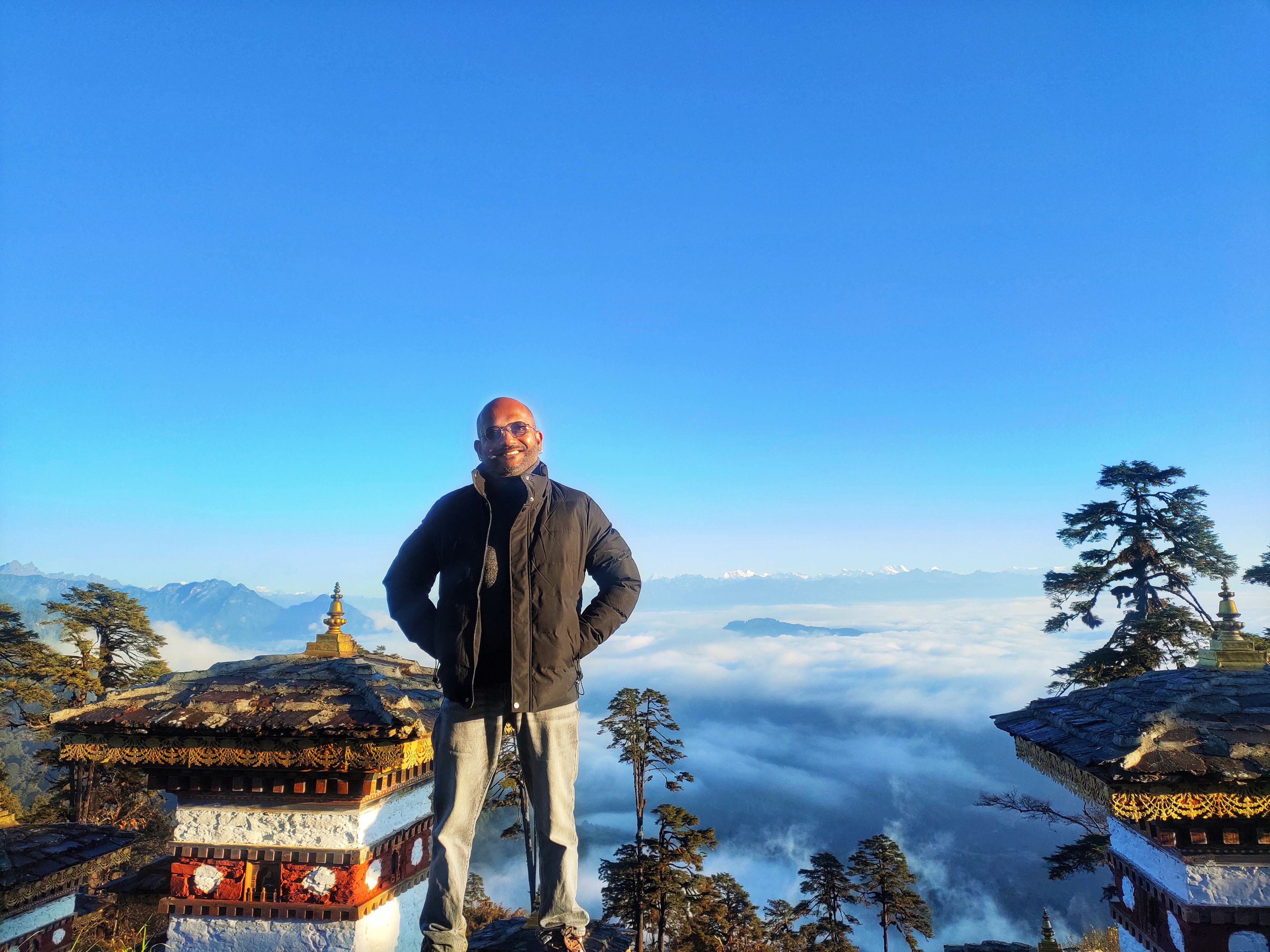 Dochula Pass: the most beautiful mountain pass in Bhutan

Dochula Pass at a height of 10,300 feet, is one of the most spectacular and highest mountain passes of Bhutan making it a popular tourist attraction. It is also reminiscent of a compelling historical event which makes it more significant. Atop the mountain pass, there are 108 stupas or chortens. These chortens at Dochula were built in memory of Bhutanese soldiers from the Royal Bhutan Army who were martyred during a military operation against insurgents in 2003. The fourth king of Bhutan, Druk Gyalpo Jigme Singye Wangchuck led this operation. 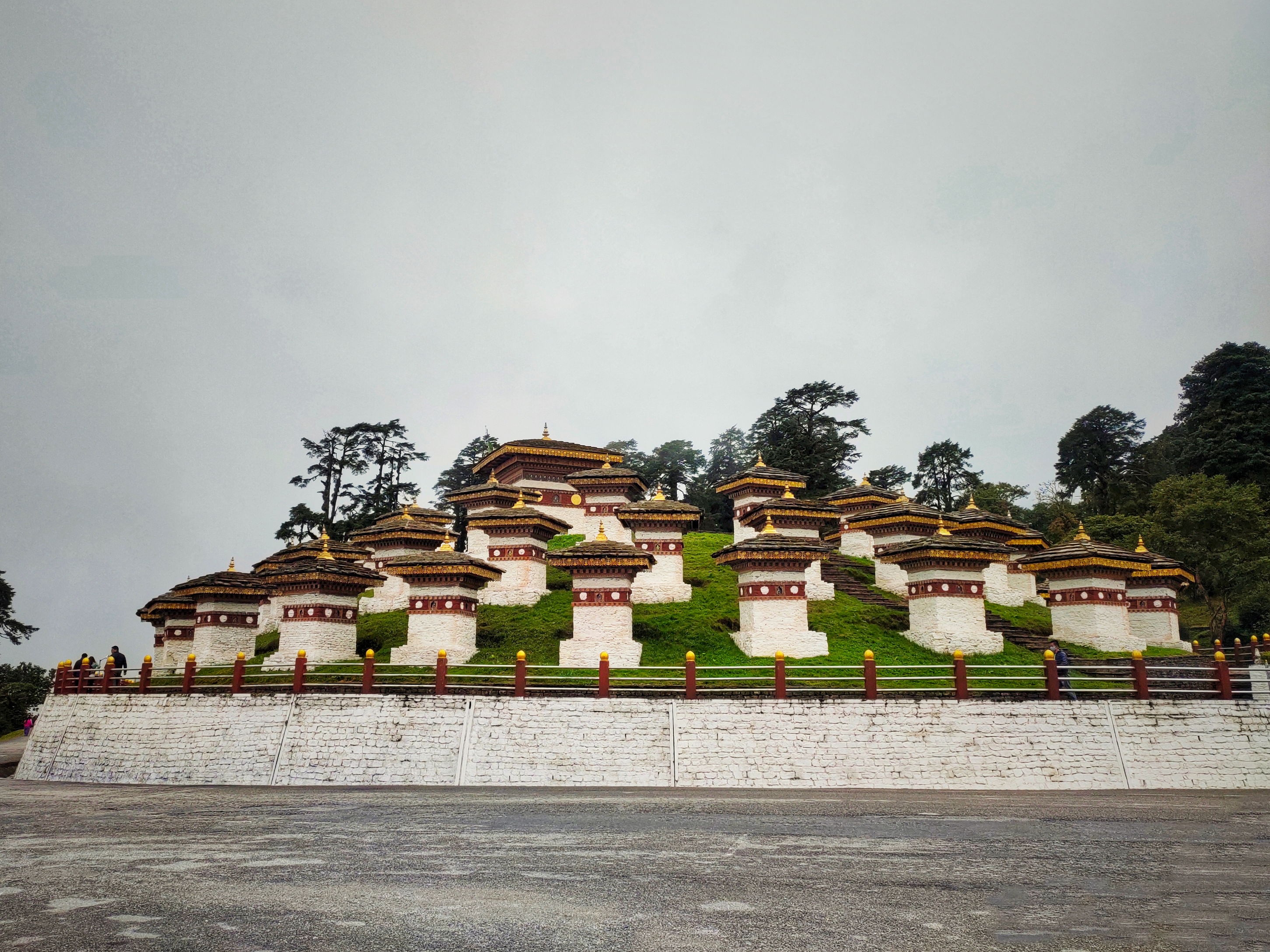 After the historical success, Ashi Dorji Wangmo Wangchuck, the Queen Mother commissioned this memorial. During its various phases of construction, all rituals were followed and it was consecrated in 2004. These 108 chortens are built in 3 concentric circles having 27, 36, and 45 chortens in each circle from topmost to lowermost. One interesting thing is that 108 chortens does not signify the number of soldiers martyred, rather it holds significance related to Buddhist culture. The place holds a solemn ambience and always instills a feeling of respect and honor whenever I visit there and the view, of course, is incredible. 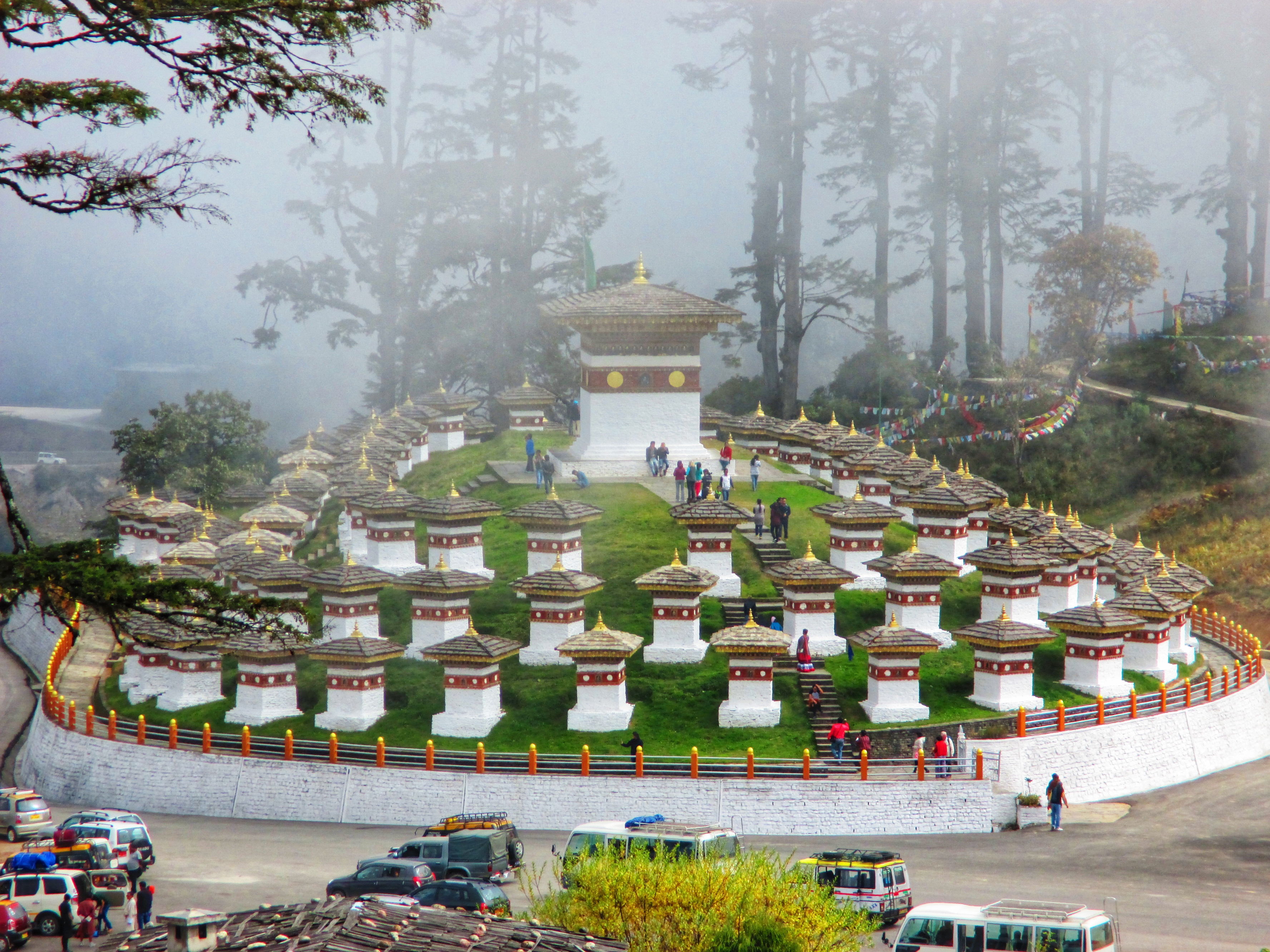 On the opposite side of the chortens is the exquisite Druk Wangyal Lhakhang, a monastery built in 2008. It was built in honor of King Jigme Singye Wangchuck and also to celebrate a hundred years of monarchy. The monastery is a lovely compliment to the 108 chortens with its intricate exterior and serene interior. The temple is painted with the same colors as the chortens with added glamor that comes from the golden roof. The paintings are a fusion of the past and the future creating a rather unique look. The interior of the temple is adorned with intricate carvings and wall paintings which speak of exceptional craftsmanship. 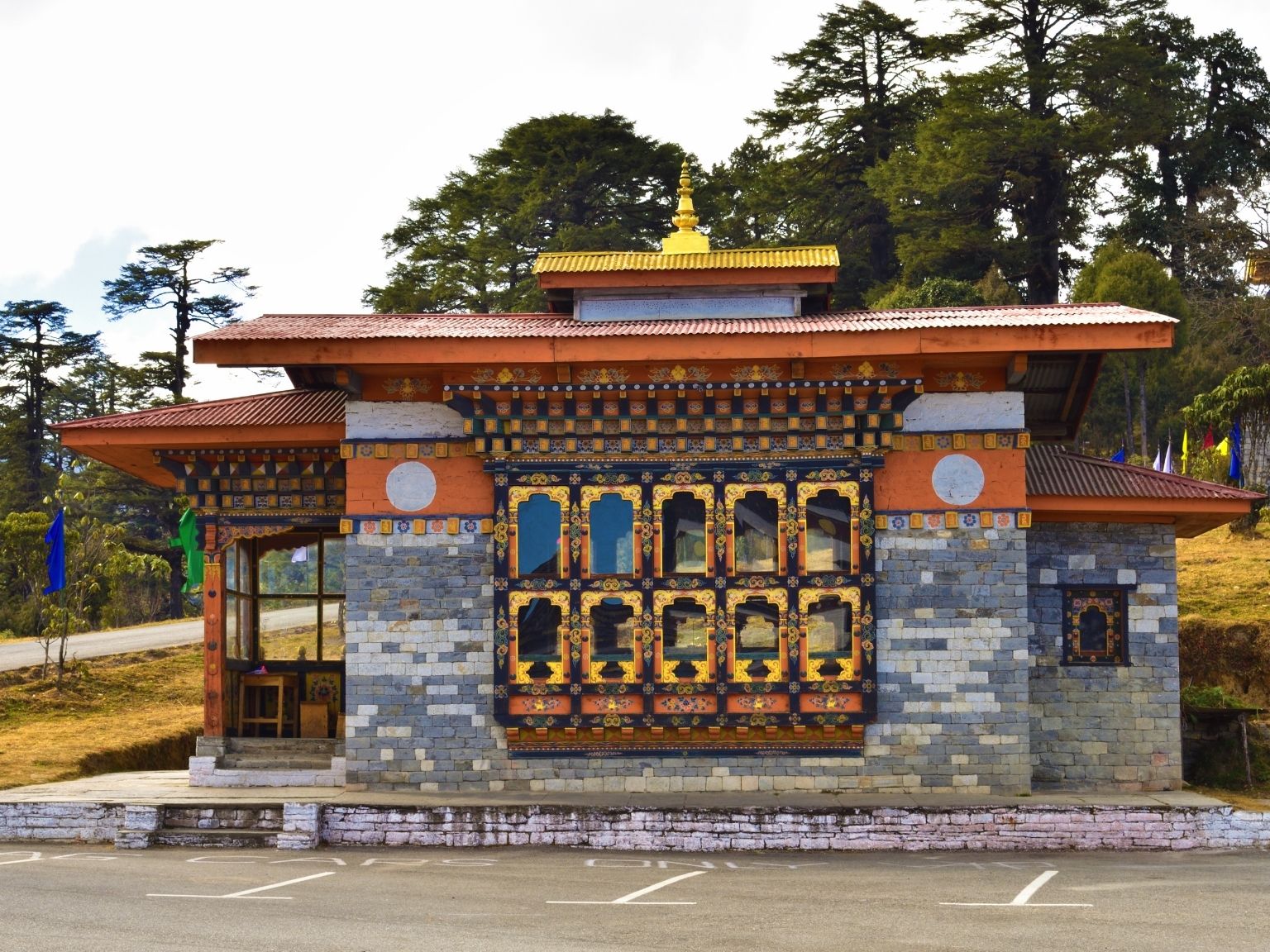 One of the vistas that most people hope to enjoy here is that of the majestic Himayalan peaks. Of course, we were also in anticipation to catch a glimpse of this amazing sight during our initial visits. The view was incredible but the peaks were not clearly visible owing to the heavy cloud cover that was present that morning. We did get a sneak peek but it was not a clear view. I was totally amazed at the sight and decided that I would definitely come back on a clear day to enjoy the panorama in its totality. With this resolve, we indulged in some refreshing chai at the nearby Druk Wangyal cafe. 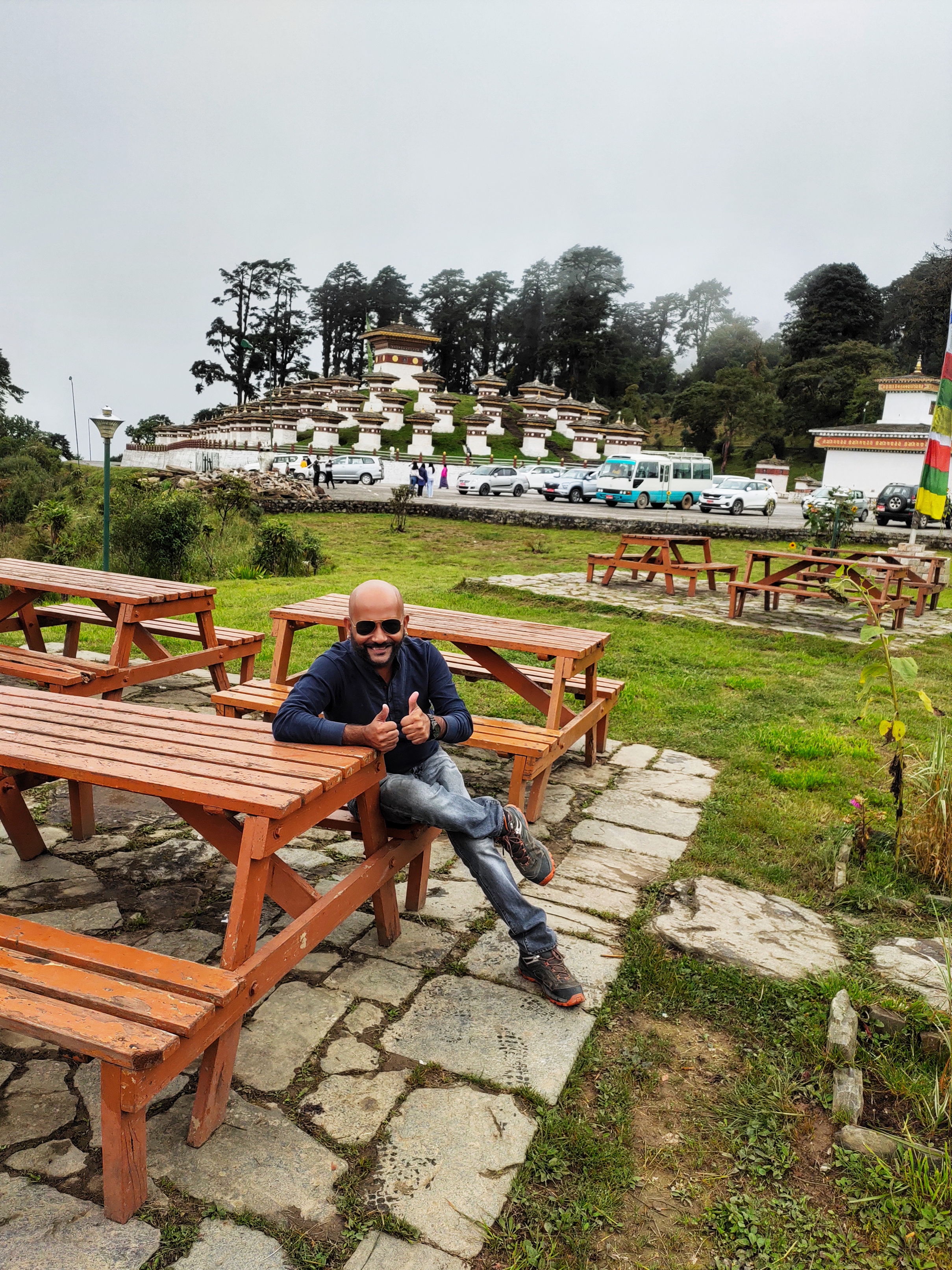 The panoramic view of the Himalayas

Near the cafe, there was a beautiful hand painted information board that caught my attention. I went towards it for a closer glance and was amazed by the information captured there. From the highest peak in Bhutan, the Mt. Gangkar Puensum (7,497m) to the other prominent peaks namely Mt. Masagang (7,158m), Tsenda Gang (6,960m), Table Mountain Zongphugang (7,060m), Jejegangphugang (7,158m), Teri Gang (7,050m), Kangphugang (7,170m), all the peaks visible from Dochula Pass were mentioned. This incredible information was truly exhilarating and my resolve to come back for this phenomenal experience was stronger than ever. Several locals and friends in Bhutan told me that the best time to get a clear view of the Himalayan peaks from Dochula Pass was in the beginning of winter, specifically November and December. 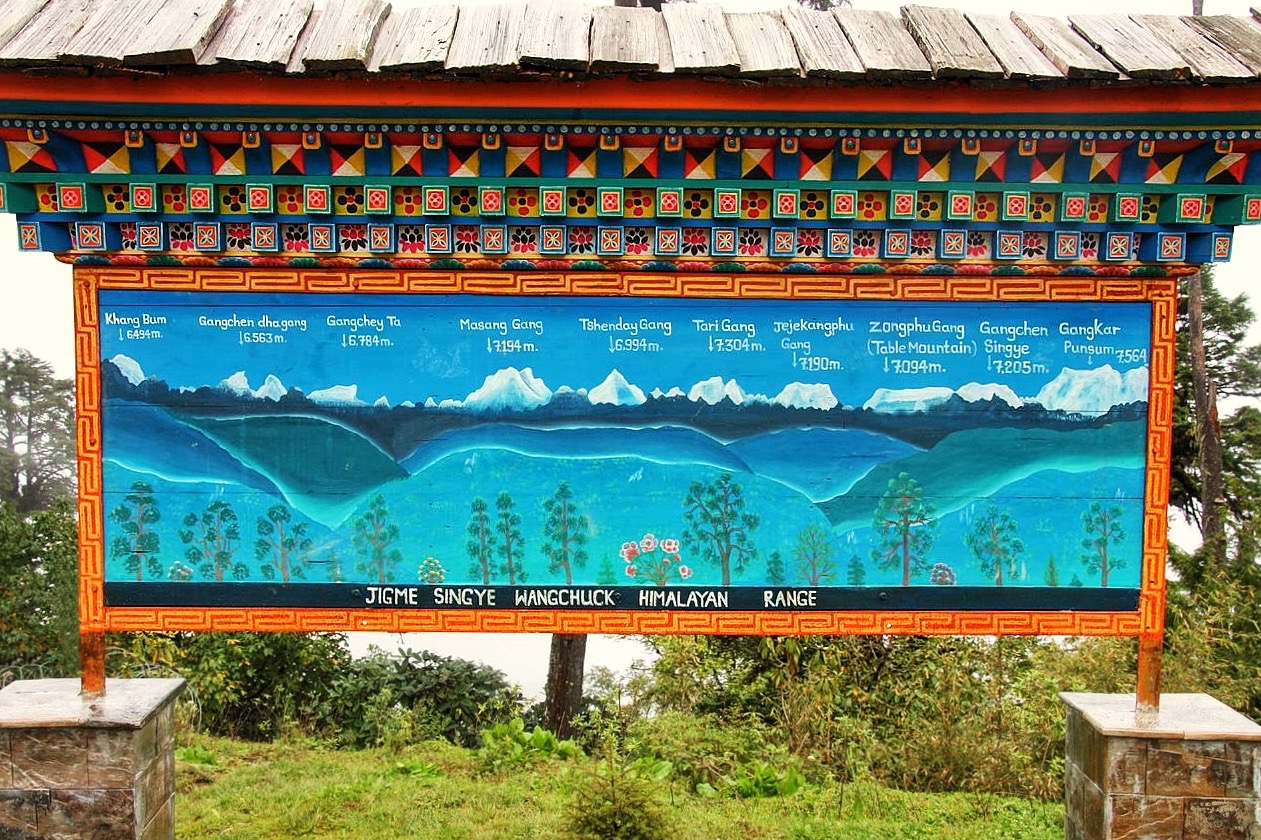 Incidentally, my birthday falls in November so I decided that I would make a trip to Dochula Pass on my birthday. Who knows, maybe Mother Nature will have a beautiful gift for me! A day before my planned trip, I got in touch with the owner of Druk Wangyal cafe near Dochula Pass to check the status of the weather and he confirmed clear skies. My manager Kinley Tshering also advised us to visit early in the morning because the clear skies last only for a 2-hour window, from 6 to 8 am. The distance from Thimphu to Dochula Pass is just 23 kms. We headed to Dochula Pass at 5.30 am from Thimphu and reached there in an hour. Nearing the mountain pass, we caught glimpses of the peaks and it was magical. We reached Dochula Pass and there they were in the distance standing majestically, the Himalayan peaks! Against the clear blue skies, these snow-capped peaks were glistening in the morning sunlight. The vista was like a painted picture in hues of blue laced with white. I was overjoyed and got into action capturing this unique vista on my camera. I could not wish for a better birthday gift and I will be ever grateful to Mother Nature for this unique experience. 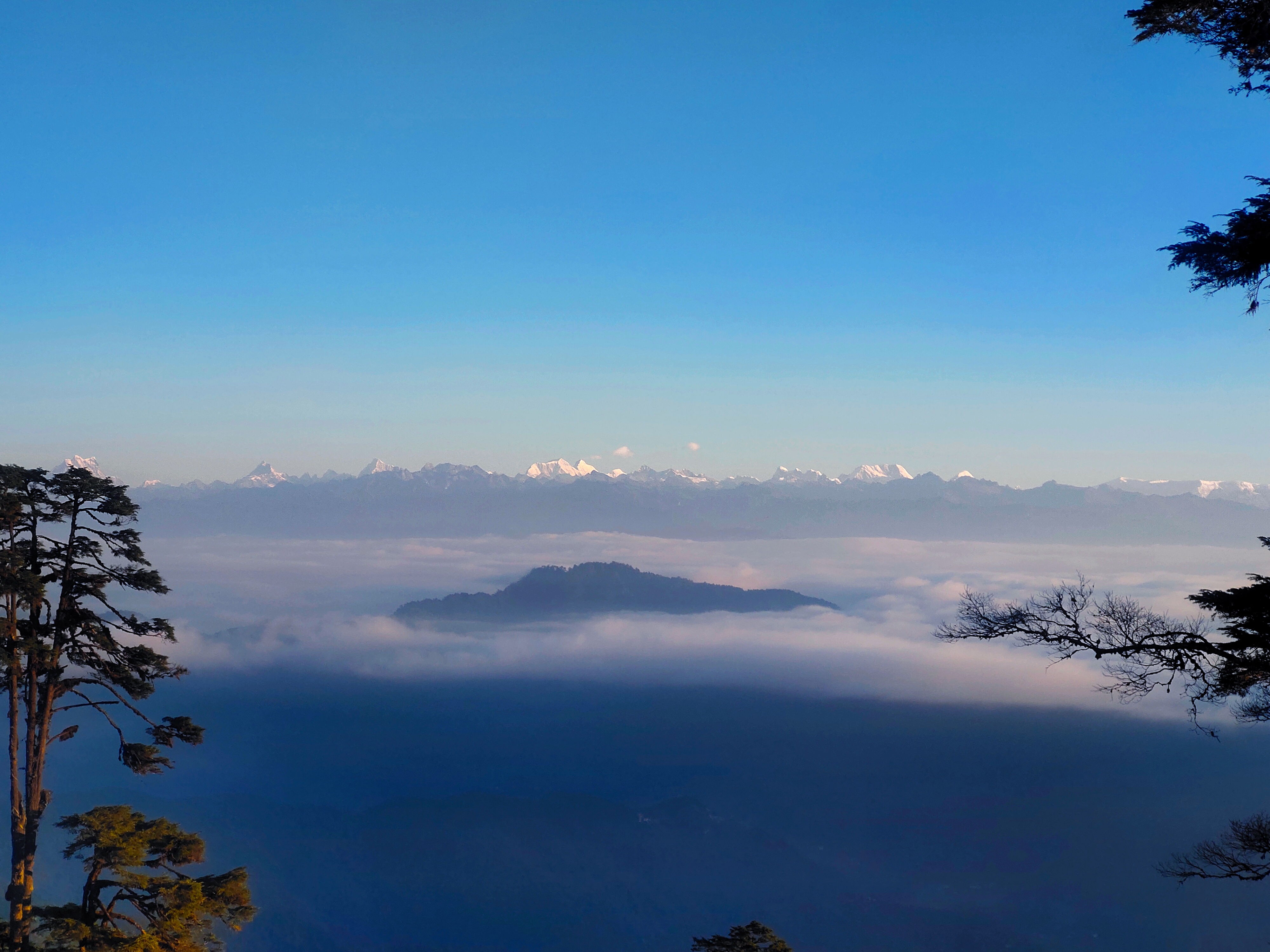 The place behind the Druk Wangyal Lhakhang (monastery) is another vantage point from where the Himalayan peaks are clearly visible. We had a resplendent 360 degree view of the Himalayan mountain range. The view had me mesmerized and I spent time lost in the sheer magnificence of the peaks. Of course, I captured innumerable photos of the view which was my way of freezing these memories in time. This staggering Himalayan range seen from Dochula Pass is part of Eastern Bhutan that borders China. 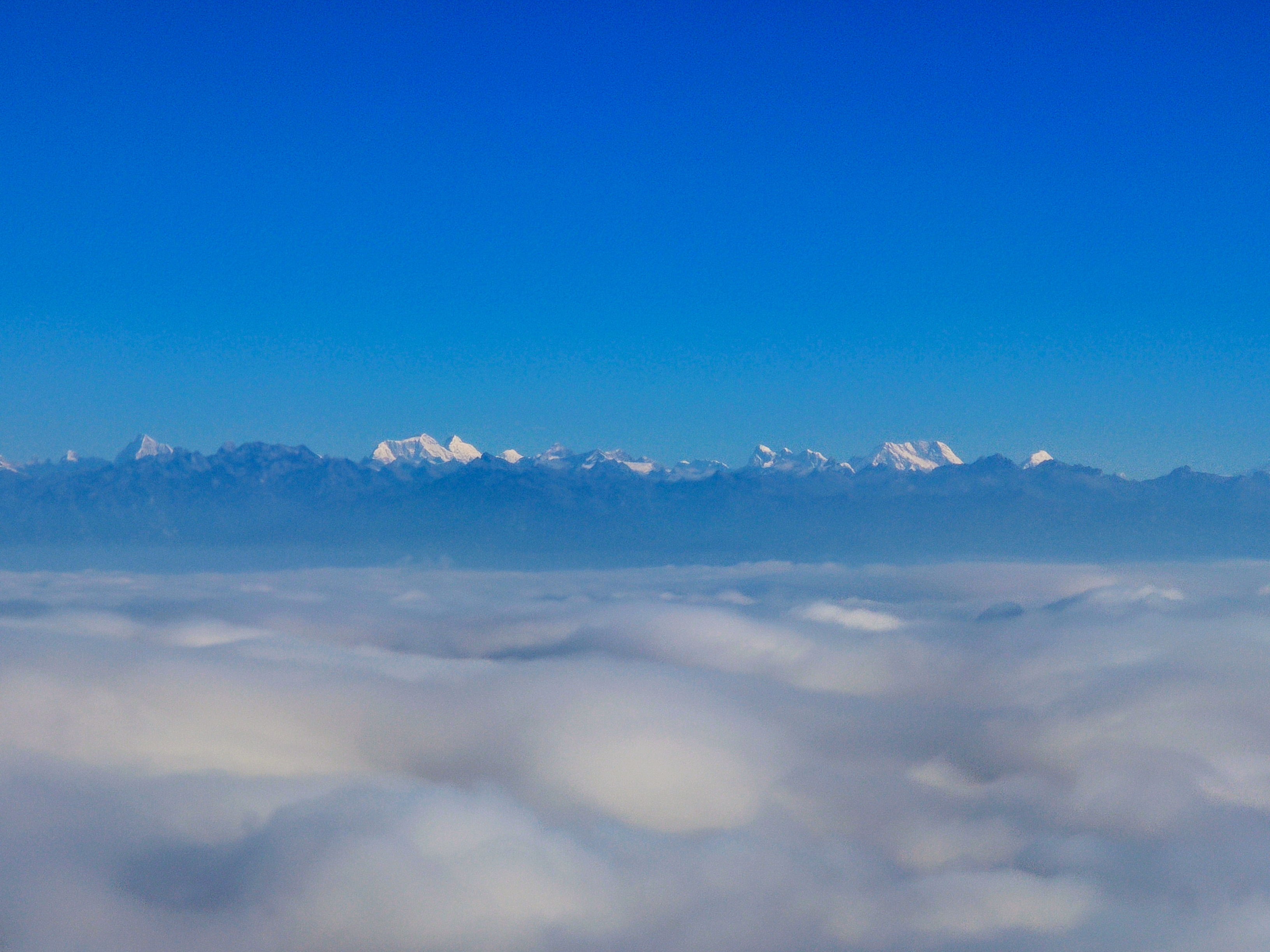 An incredible view of the seven Himalayan peaks from Druk Wangyal Lhakhang with Mt. Gangkar Puensum and Mt. Masagang catching the sunlight

As the day progressed, the temperature at Dochula Pass rose. As the clouds descended, they gradually covered the peaks. I had no complaints because I got the once-in-a-lifetime opportunity to clearly witness the incredible Himalayan peaks. We wandered around in Dochula Pass for a while longer enjoying the pleasant weather and had a scrumptious breakfast at Druk Wangyal Cafe before heading back. What a remarkable day it was! 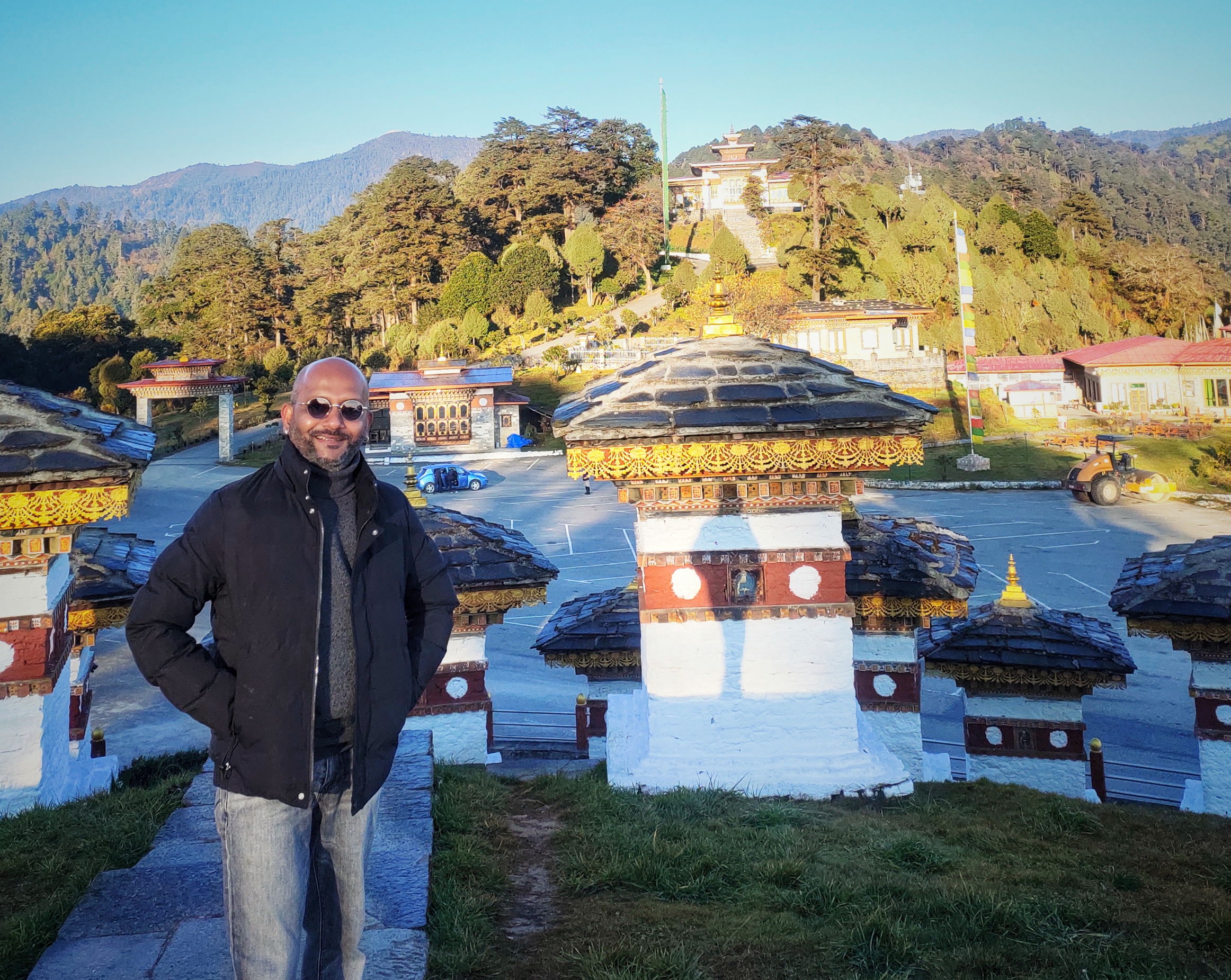 In conversation, I had heard that one does get lucky sometimes in the month of December also to view the Himalayan peaks. During that time, we had planned to visit some little known treasures of Bhutan. Here was another opportunity to stop at Dochula Pass, and of course, we did not let the chance pass. En route we visited Dochula Pass and as always were mesmerized by the vistas around. While we did get a vague glimpse of the peaks, it was not as spectacular as what we witnessed in November. The surroundings were gorgeous nonetheless and we spent some time there before driving to Punakha. 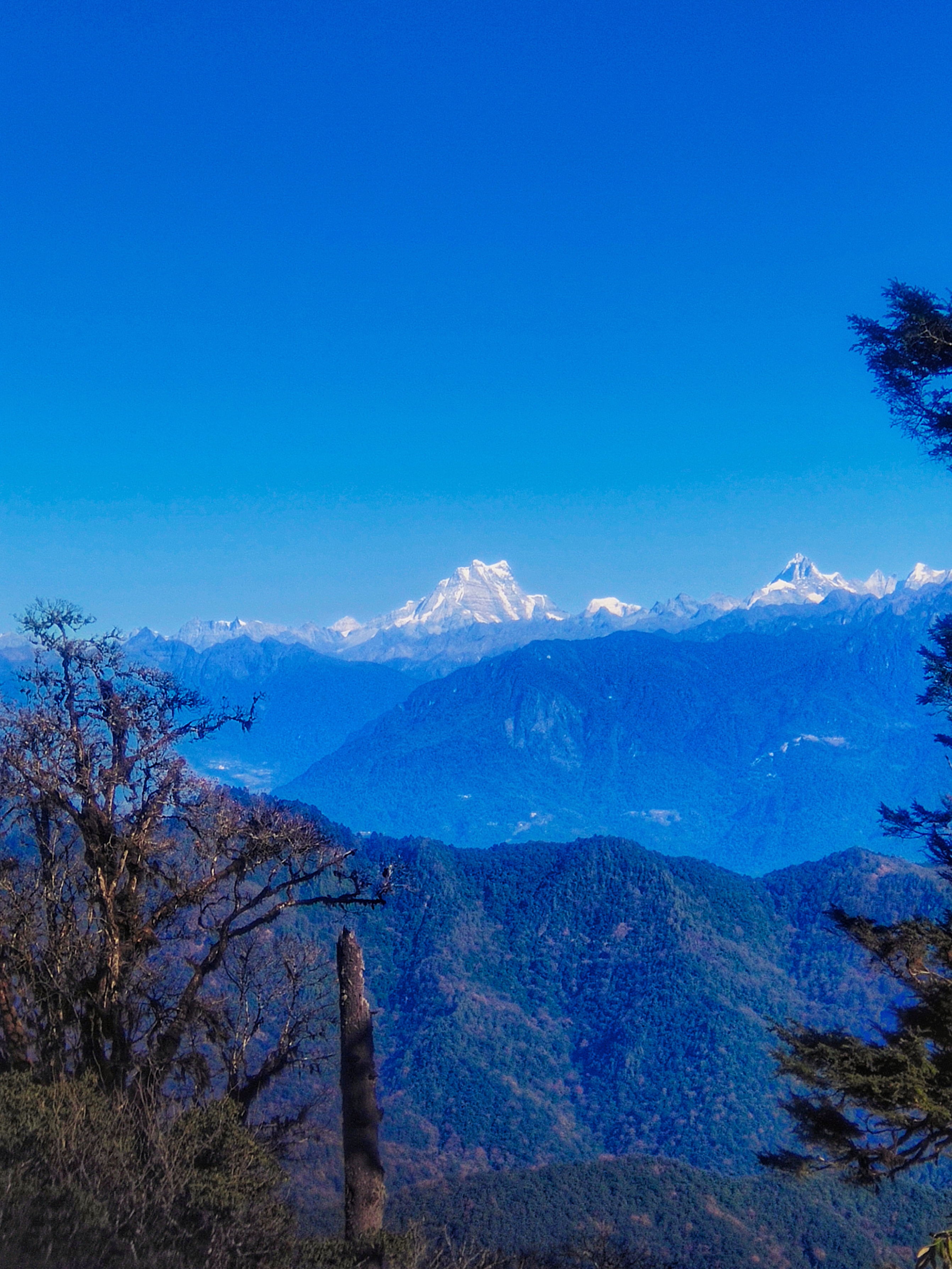 Here is a mesmerizing view of Mt. Masagang at a staggering 7,158m

The best of the best in November

When I look back at the different times that I visited Dochula Pass across various months of the year, November is the best time, hands down. While each visit was special and offered mind blowing views of the landscape from an altitude of 3,100m, the vista in November will be etched in my memory forever. I would make this trip over and over again and be gobsmacked each time by the sheer splendor of the view. The skies a million hues of blue, white snow-capped Himalayan peaks forming a stunning backdrop and 108 chortens adorning the mountain pass, this is heaven on earth.

What is the best time to visit Dochula pass?

The biggest attraction at Docuhla Pass is the panoramic view of Himalayan peaks. Dochula Pass remains covered in mist most of the time. The best time to visit is early morning during the winter months of November and December when the temperature is low and the visibility is clear.

Why was the Dochula Pass built?

The Dochula Pass and its 108 chortens were built in memory of the Bhutanese soldiers who died in the first military war "Operation all Clear" conducted by the Royal Bhutan Army in 2003.

How do you get to Dochula Pass?

Dochula Pass is just 25 kms from Thimphu on the way to Punakha. It takes about 40 min by car and about an hour by bus. There is also a trek from Thimphu to Dochula Pass for the adrenaline junkies.

How high is Dochula pass?

Dochula Pass is situated at an elevation of 10,300 feet above the sea level. It is one of the highest mountain passes in Bhutan.

The best time to visit Dochula Pass is from September to December to enjoy the picturesque views. From my experience, the best time to get a clear view of the spectacular Himalayan peaks is November.

Bhutan has rich art & culture, which is very vividly seen in the construction of the 108 chortens and the Druk Wangyal Lhakhang (monastery) in Dochula Pass. The intricate carvings and colorful paintings speak of exceptional craftsmanship.

Bhutanese cuisine is full of flavor. Rice is a staple, which is cooked both with meats and veggies into a one-pot meal. Besides this, momos and soups are also a MUST try while in this exotic land.

Bhutan is a safe place to travel to as the people are simple and warm hearted. What one should be cautious about is the travel. The terrain in this country is rough and landslides are common which can be risky.

While Dochula Pass is a famous destination, the timing to visit for thr perfect view of the Himalayan peaks is not well known, making it a unique experience. Some parts of Bhutan are completely off the tourist radar & make for nice adventure trips.

Considering the terrain, comfortable shoes and clothing is a must. Warm clothes and a raincoat is mandatory. For those with motion sickness, do not forget your meds. Insect repellent is also recommended.