Once an explorer, always an explorer. This might sound cliche, but that is the truth. Coming to Bhutan for work, opened up my horizons and created immense opportunities to explore this intriguing and awe-inspiring land. This land of the Thunder Dragon has myriad mazes that are yet to be explored. After a hectic week of work, the weekends are all about relaxation and enjoying the offbeat places in Bhutan. Living in Bhutan as Indian has a lot of privileges as you can plan a trip almost every weekend. One extended weekend in August opened up the possibility of a trip to Phobjikha Valley, Ura Valley, and Trongsa. Of course, I jumped at the chance and planned an itinerary and soon, our gang was on our way.

After an awesome trip to some of the hidden gems of Eastern Bhutan few weeks ago, we were looking forward to exploring unusual attractions in Bhutan. We started from Thimphu at 9 am and headed to Phobjikha Valley which is a 140-kilometer drive from Thimphu. It took us about 5 hours to reach Phobjikha Valley. Reaching Phobjikha Valley is a little challenging as the terrain is tough and it is off tourist radar. While the best way to travel is by car/cab, there are buses that ply every Thursday and Saturday. A slight deviation on the route from Thimphu to Bumthang leads to Phobjikha Valley in Wangdue Phodrang Province. 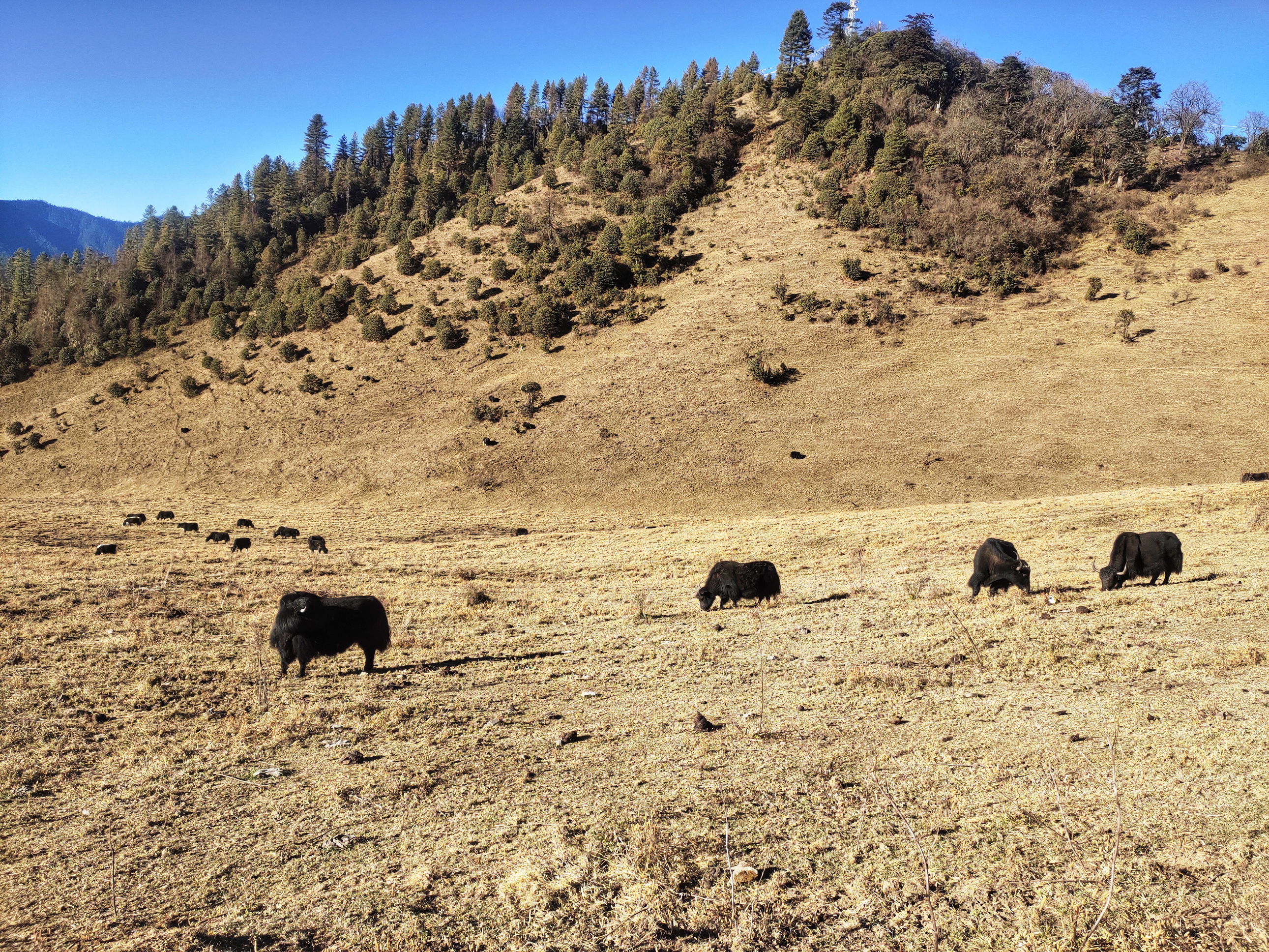 The bowl-shaped Phobjikha Valley set against the backdrop of the Black Mountains, offers some of the most spectacular views. It is mostly countryside with expanses of lush grasslands located at an altitude of nearly 10,000 feet. Sparingly visited by travelers, this quaint village started using electricity only a few years ago. It is one of the few glacial valleys in Bhutan. After reaching Phobjikha Valley, we checked into our accommodation, which was about 10 kilometers away from the valley itself. We were awe-struck by the sheer beauty of the valley and the incredible views surrounding us. This valley is undoubtedly one of the most beautiful places in Bhutan. 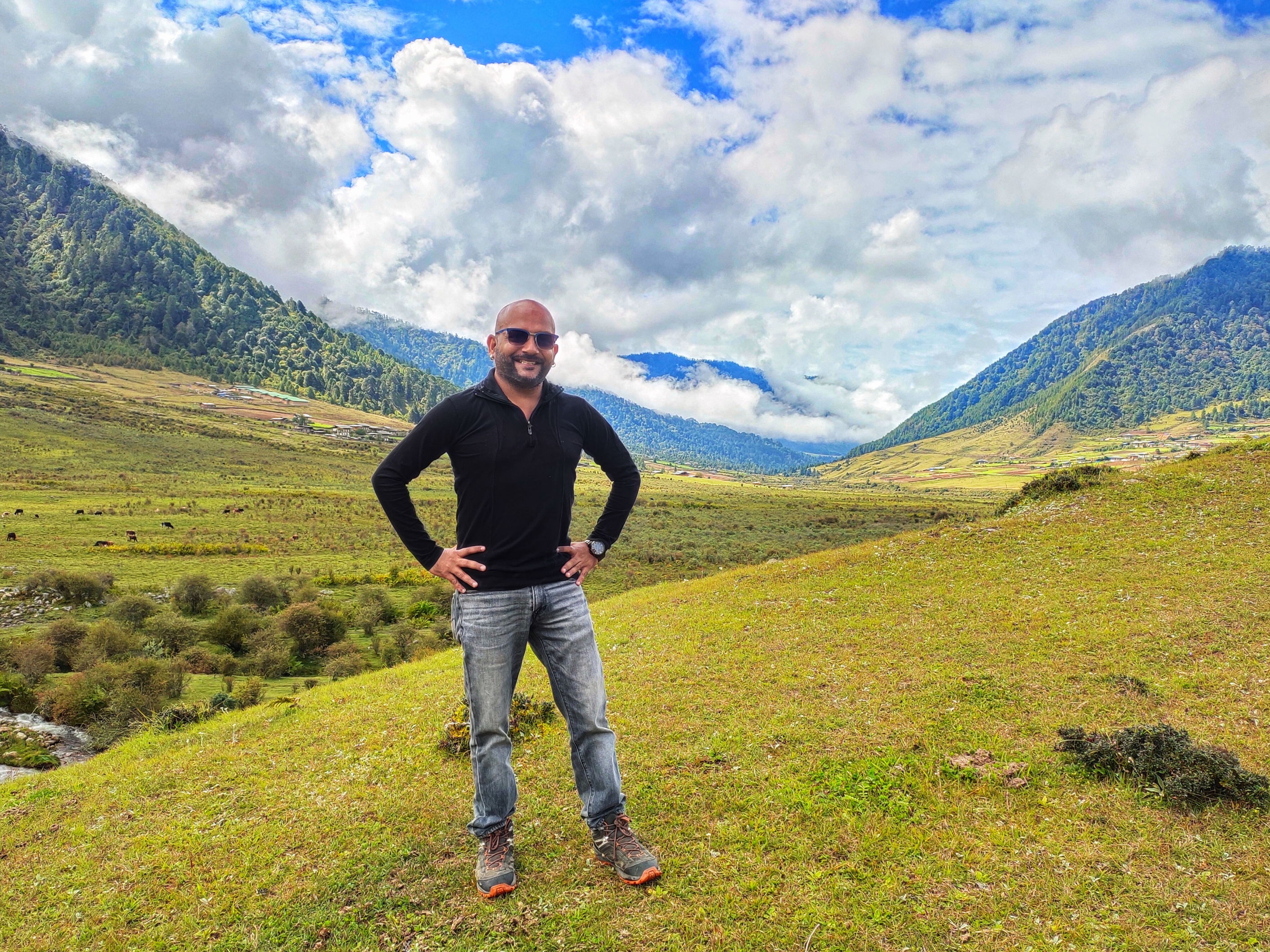 The sheer beauty of Phobjikha valley definitely calls for a picture!

An iconic significance of Phobjikha Valley is the migration of the endangered Black-necked Cranes. Native to Tibet, these endangered species travel to Bhutan during the winter months to escape the extreme winter in Tibet. Being a valley, Phobjikha has relatively warmer temperatures, at least 6-10 degrees higher. The best time to visit Bhutan to see Black-necked cranes is late October to January. I set out early in the morning in anticipation to see Black-necked cranes. As soon as I reached the valley, I spotted them at a distance. Excited, I headed forward to get a closer look. Unfortunately, due to ecological restrictions, I was unable to get close enough to capture them on my camera. Just standing at a distance and seeing these visiting black beauties was a humbling experience. But I soon found them somewhere else. 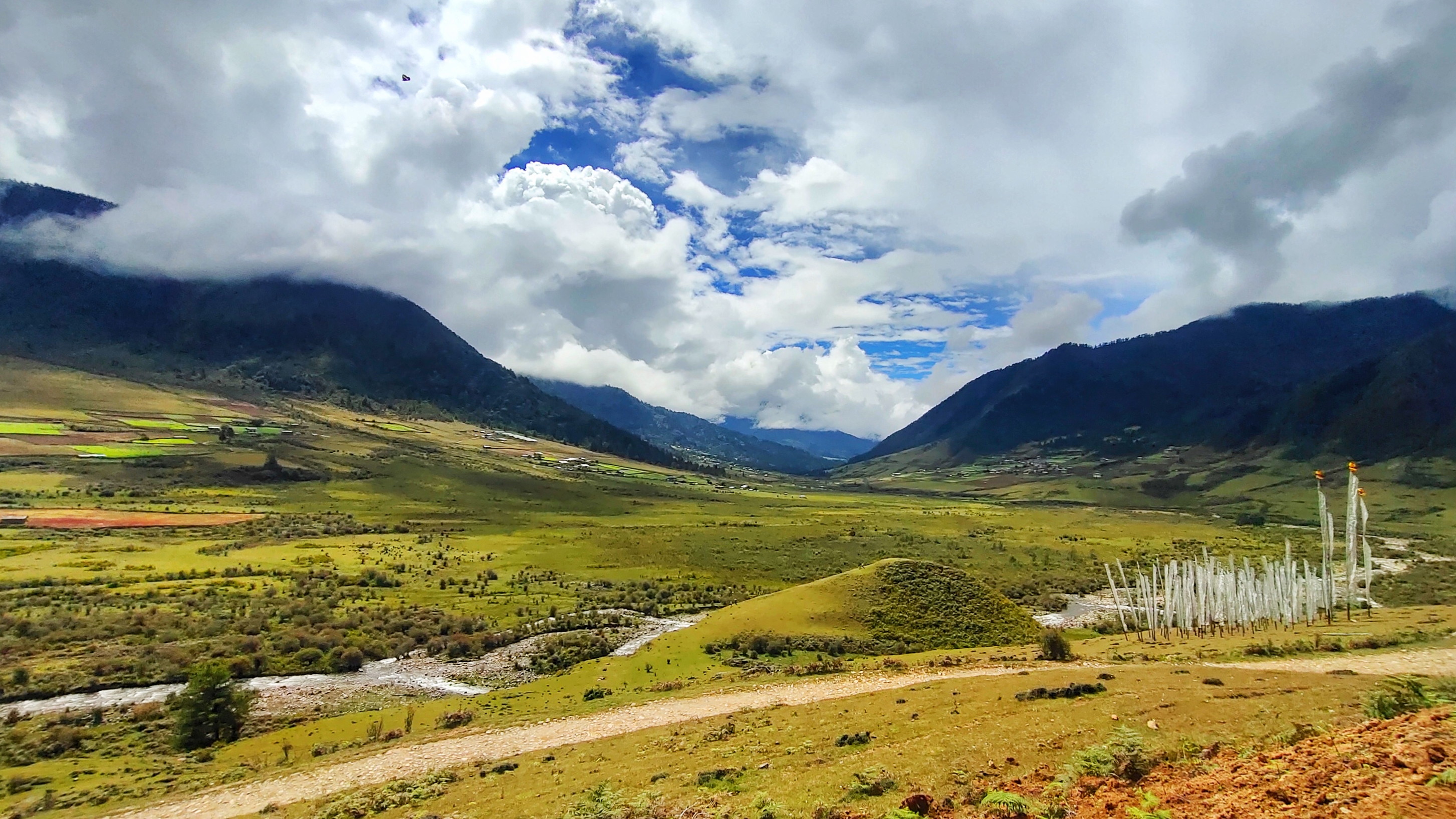 Bhutan's commitment to nature and conservation is well known and the Jigme Singye Wangchuck National Park which is a conservative site is proof of this. In 2003, the conservation area was established by Bhutan in the Phobjikha Valley. Initiated by Royal Society for the Protection of Nature (RSPN), it extends across 163 square kilometers. While Black-necked Cranes are the focus, RSPN has a mandate to protect 13 other vulnerable species as well. The cranes, which were hunted in Bhutan until 1980. In recent times, they are protected by a law enforced under which any person found killing a crane can be put behind bars. Bhutan also has the Black-necked Crane Festival that is celebrated on November 11 each year. We then visited the Jigme Singye Wangchuck National Park where we saw the gorgeous Black-necked Cranes up close. It was incredible to see these stunning birds and we spent some time here. One of the unique features of Black-necked cranes is almost the same size of male and female with male slightly bigger than female. 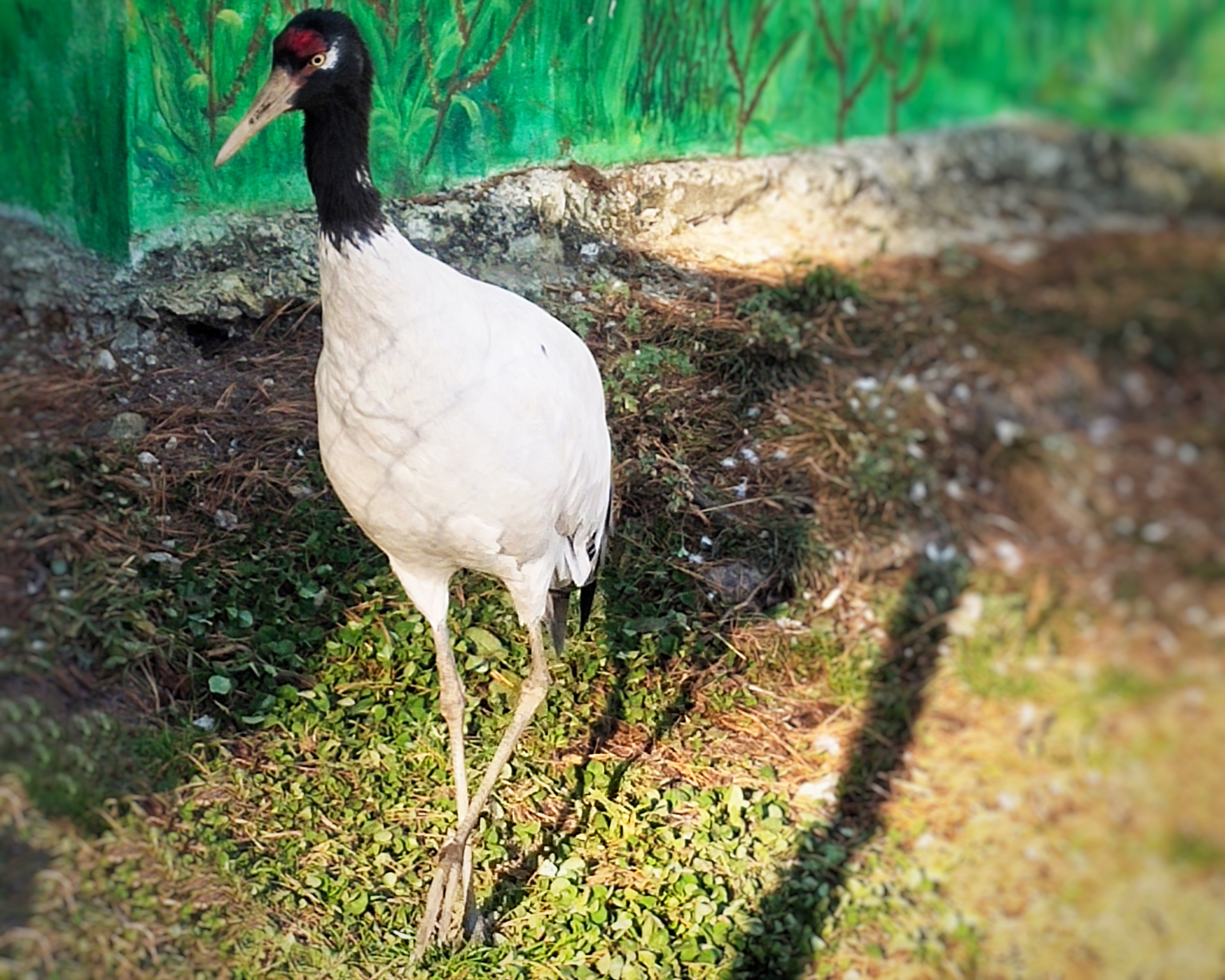 After a restful night, I woke up early to venture out and explore this enchanting valley. There are several hotels around but the valley itself does not have accommodation. I took a long leisurely walk in the valley and was embraced by the magic of this gorgeous haven. Phobjikha Valley is also known as Gangtey because of the Goemba that is at the top of the ridge located above the valley. From a distance, it looks like a monk is meditating at the top of a hill. Adding charm to this exquisite ambience is the Nakey Chhu River that flows through the valley reaching the Punak Tsang Chhu. There are a number of treks that adventure lovers can explore in this beautiful valley and an offbeat place in Bhutan. 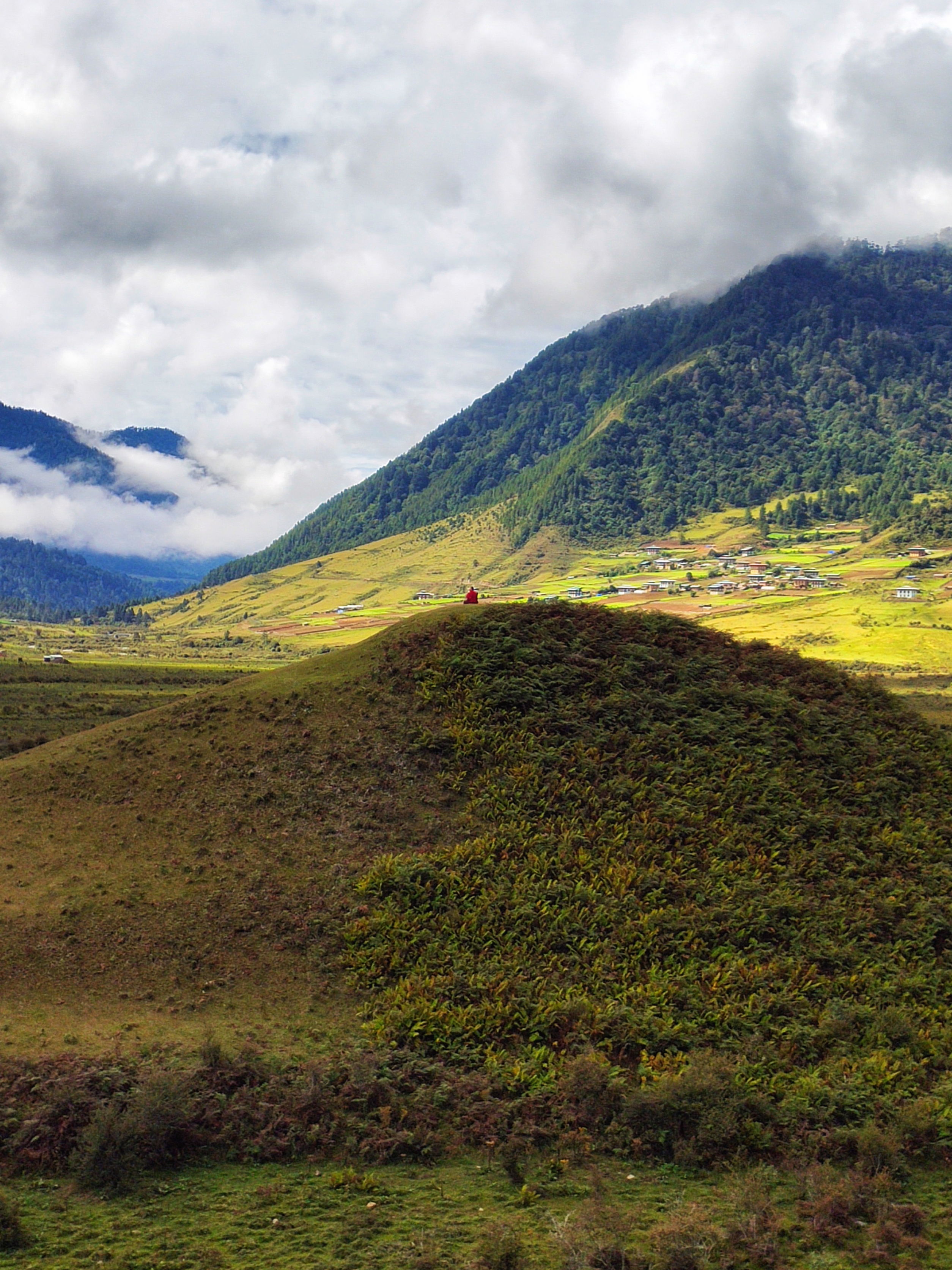 Ura Valley - A Piece of Heaven

From Phobjikha Valley we headed to Ura Valley of Bhutan, the highest valley of Bumthang District located at an elevation of over 10,000 feet and below Thrumshingla. A 5-hour drive across 164 kilometers took us through the most lush terrace farms and majestic hills dotted with dense forests. The valley itself is known for its scenic landscapes and the rustic village takes you back in time. The small traditional houses sprinkled on the hillocks, the simple local people in their traditional attire and the peaceful ambience leaves travelers mesmerized. Ura Valley is one of the secret places in Bhutan for travelers. Most travelers come up to Bumthang but only a handful venture further. This place also makes for a spectacular drive. 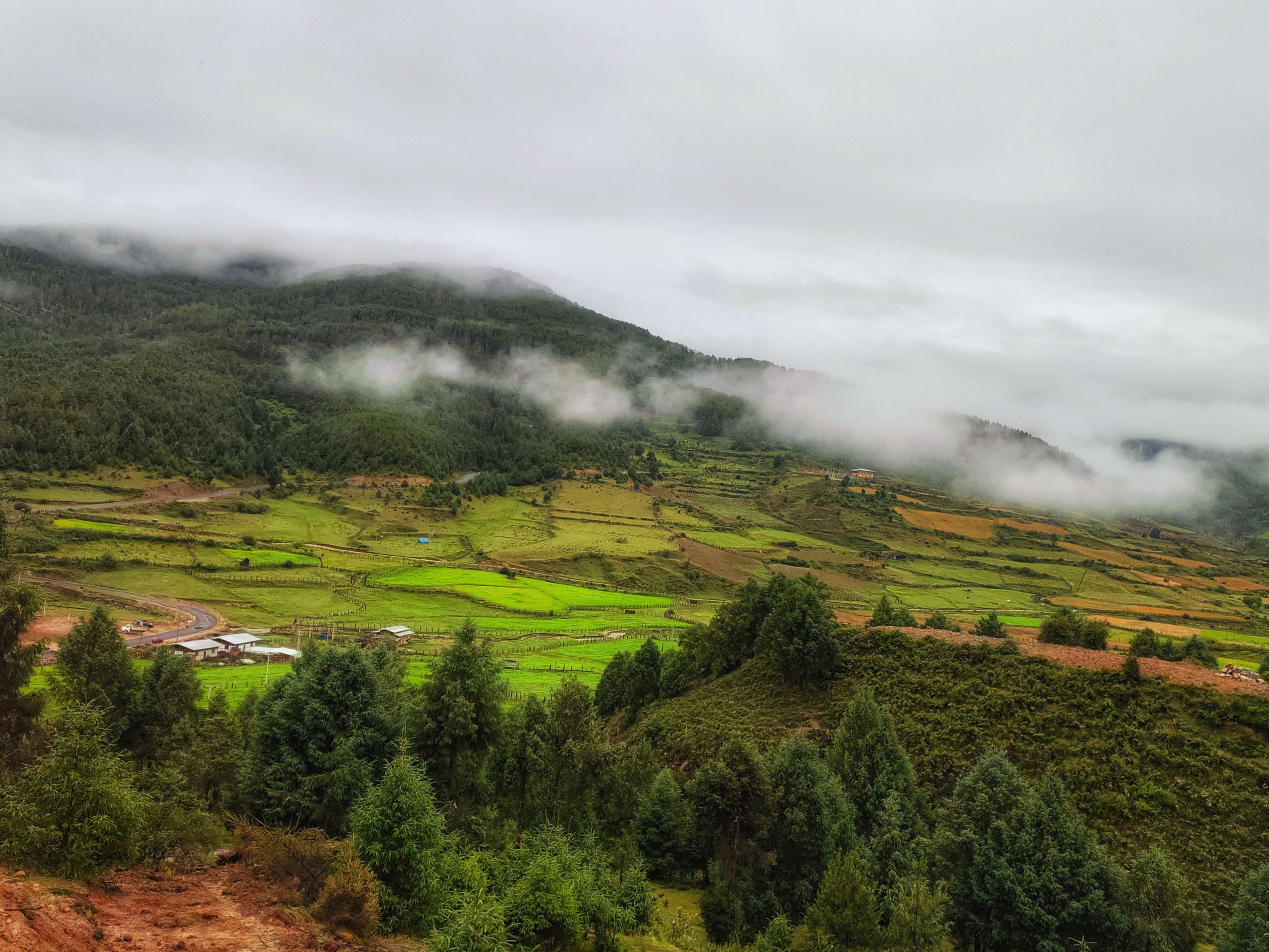 There are no hotels or other accommodations available in Ura Valley Bhutan. There are a few guest houses that can be accessed if you have local connections. We managed to get accommodation in one of the guest houses for a night. We woke up to a beautiful chilly morning and the view of the valley from our guest house was jaw-dropping. I enjoyed a lovely walk breathing in the clean crisp air and immersing myself in the magnificent vista of one of the most beautiful places in Bhutan. I met some warm-hearted locals and interacted with them for a while before returning to my guest house for a warm breakfast. I heard about Ura in Bhutan 5 years ago and still today it remains one of the untold places to visit in Bhutan. 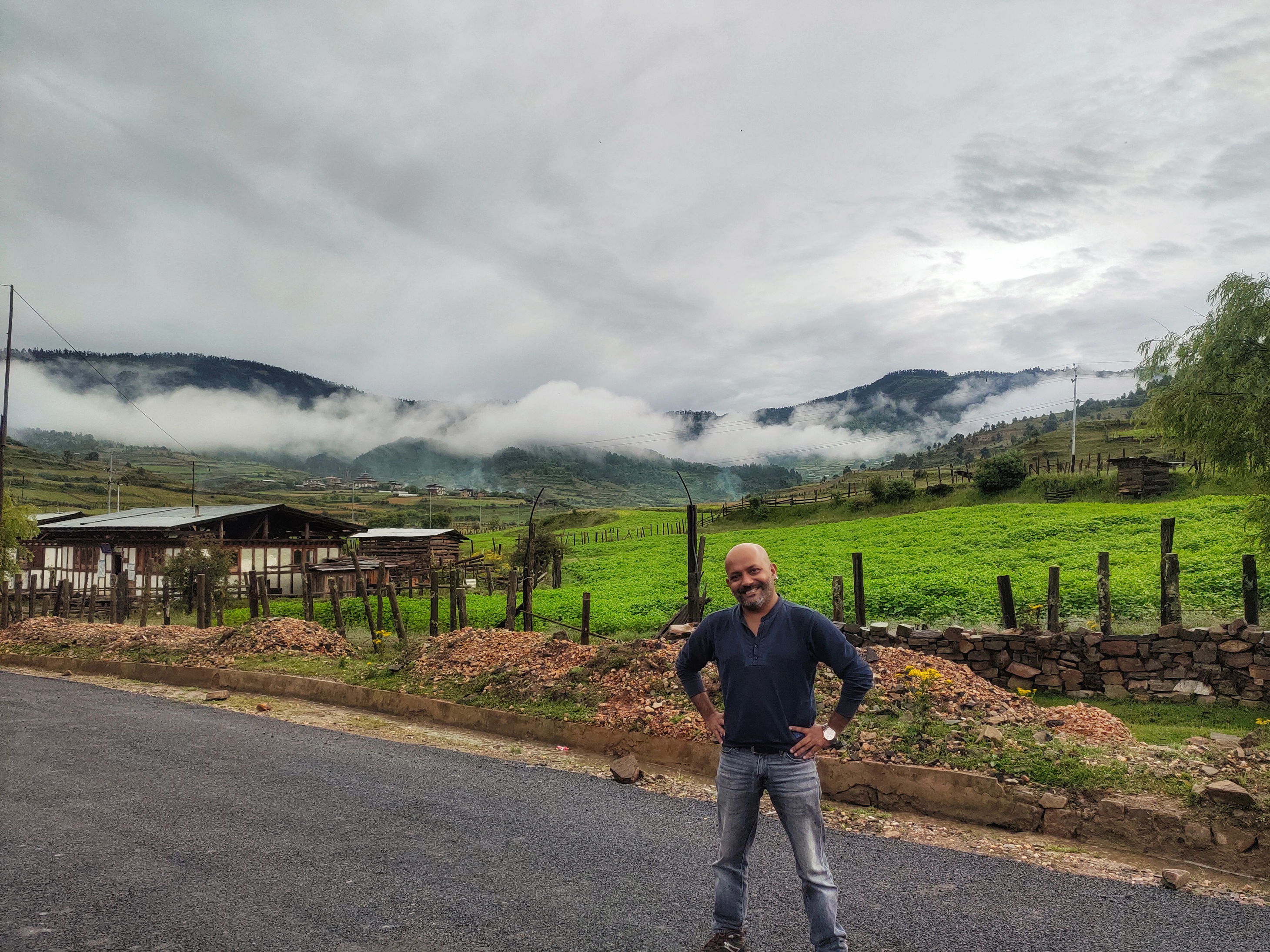 Trongsa - Home to the Largest Dzong in Bhutan

We started our journey back to Thimphu from Ura Valley. We stopped at Trongsa, which is on the highway en route and one of the unusual attractions in Bhutan. Trongsa district is the ancient seat of power of Bhutan. This 82-kilometer drive took us about 3 hours to cover. Trongsa in Bhutan means 'New Village' in the local dialect and this name was given due to the retreats, temples and hermit residences in the area. On reaching Trongsa, we checked into the Government Electric Guest House, which has selective access. A word of caution here, beware of snakes as Trongsa district is known to have them in plenty. 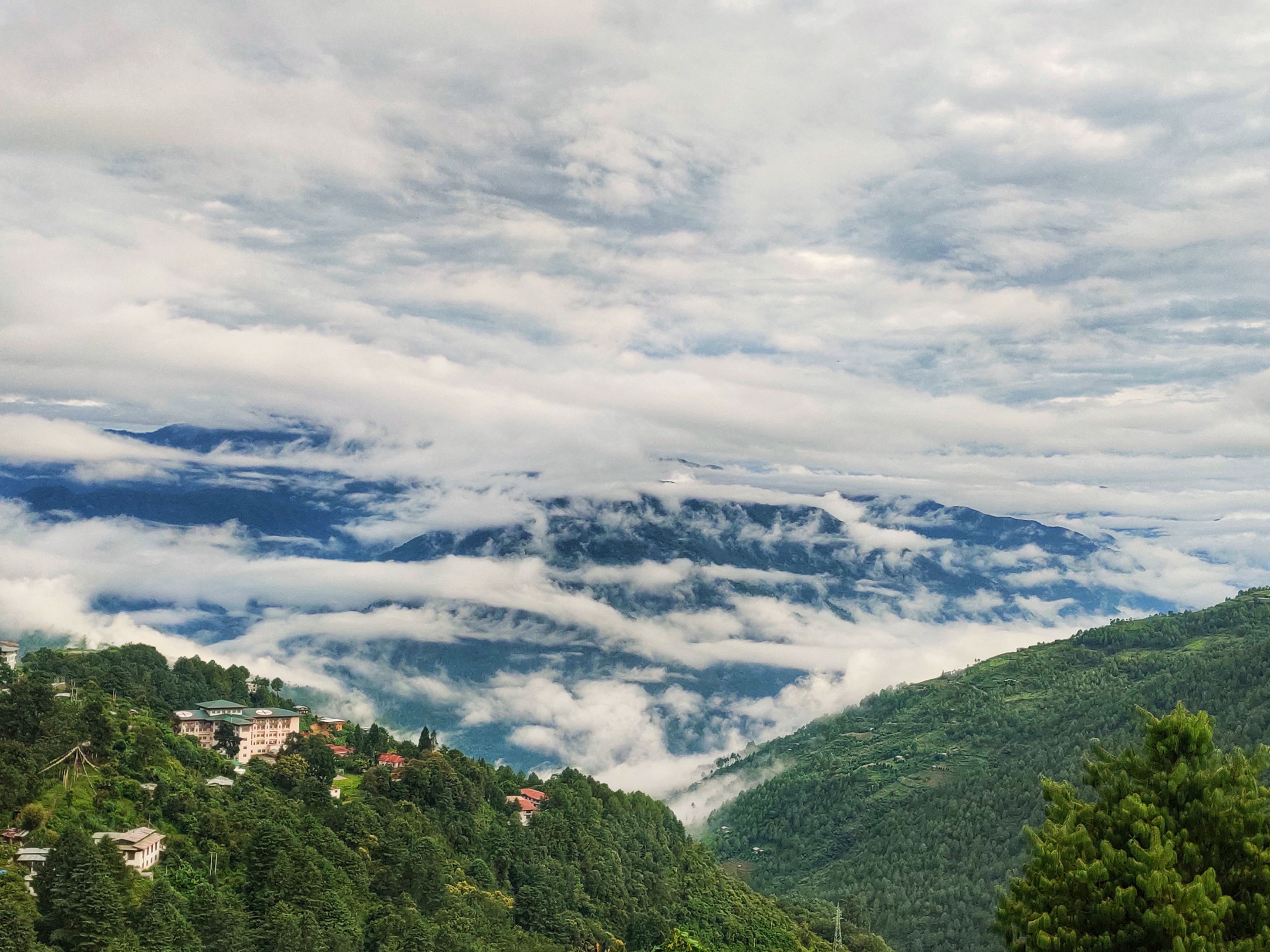 The altitude of Trongsa is 7,000 feet and hence, the weather is much better here. After freshening up, we visited the most famous place in Trongsa, the Trongsa Dzong, the largest Bhutan Dzong fortress. It was the seat of power of the Wangchuck dynasty who in 1907 became rulers of Bhutan. While the history of Trongsa Dzong dates back to 1543, its current avatar was built by Chhogyel Mingyur Tenpa in 1644. The official name of this Bhutan Dzong is Chhoekhor Raptentse Dzong but it is also known as Choetse Dzong. The strategic location of the Dzong perched high above the roaring Mangde Chhugave gave it power over the eastern part of the country. It was the only trail between eastern and western Bhutan that still leads straight through Trongsa. It is a major monastic complex that houses almost 200 monks. 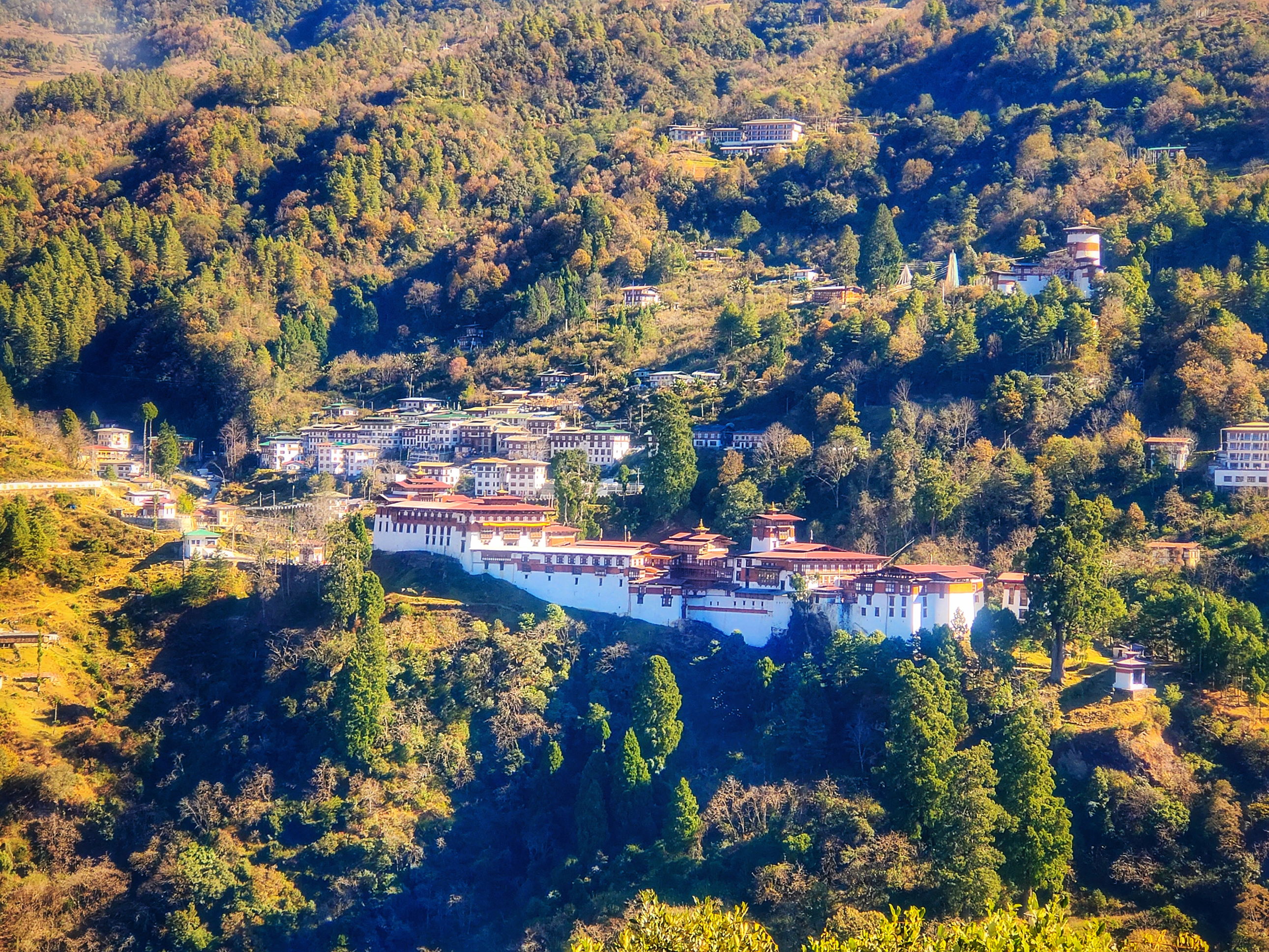 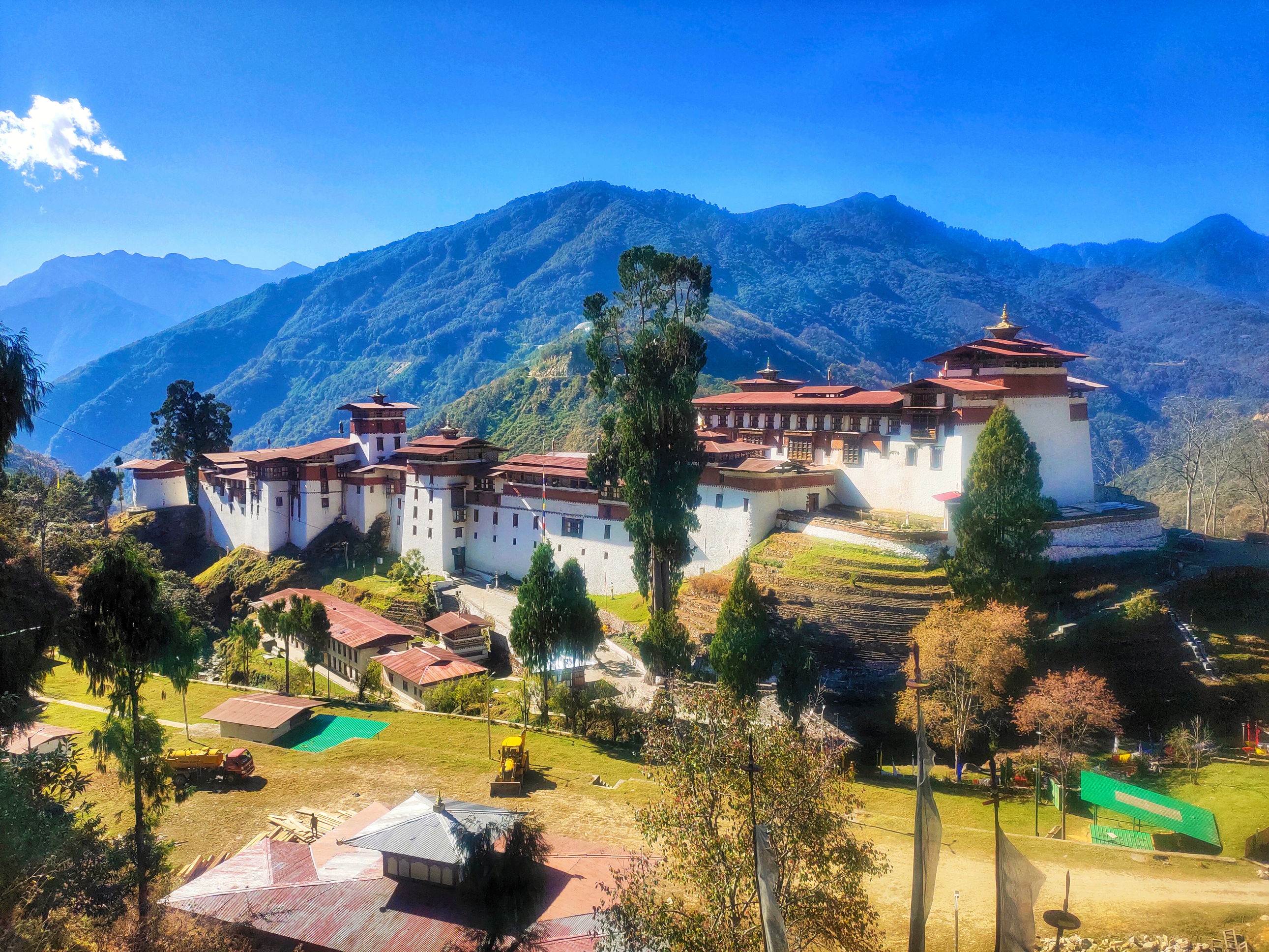 The entrance to this incredible Trongsa Dzong is as mesmerizing as the structure itself. A beautifully carved entrance bridge with a river gushing underneath is alluring. The colorful prayer flags decorating the sides of the bridge add to the beauty of the place. Prayer flags are featured everywhere in this mystic land showcasing the belief and culture of the Bhutanese people. As we crossed the bridge towards this Bhutan Dzong, an indescribable feeling of calmness and tranquility came upon us. 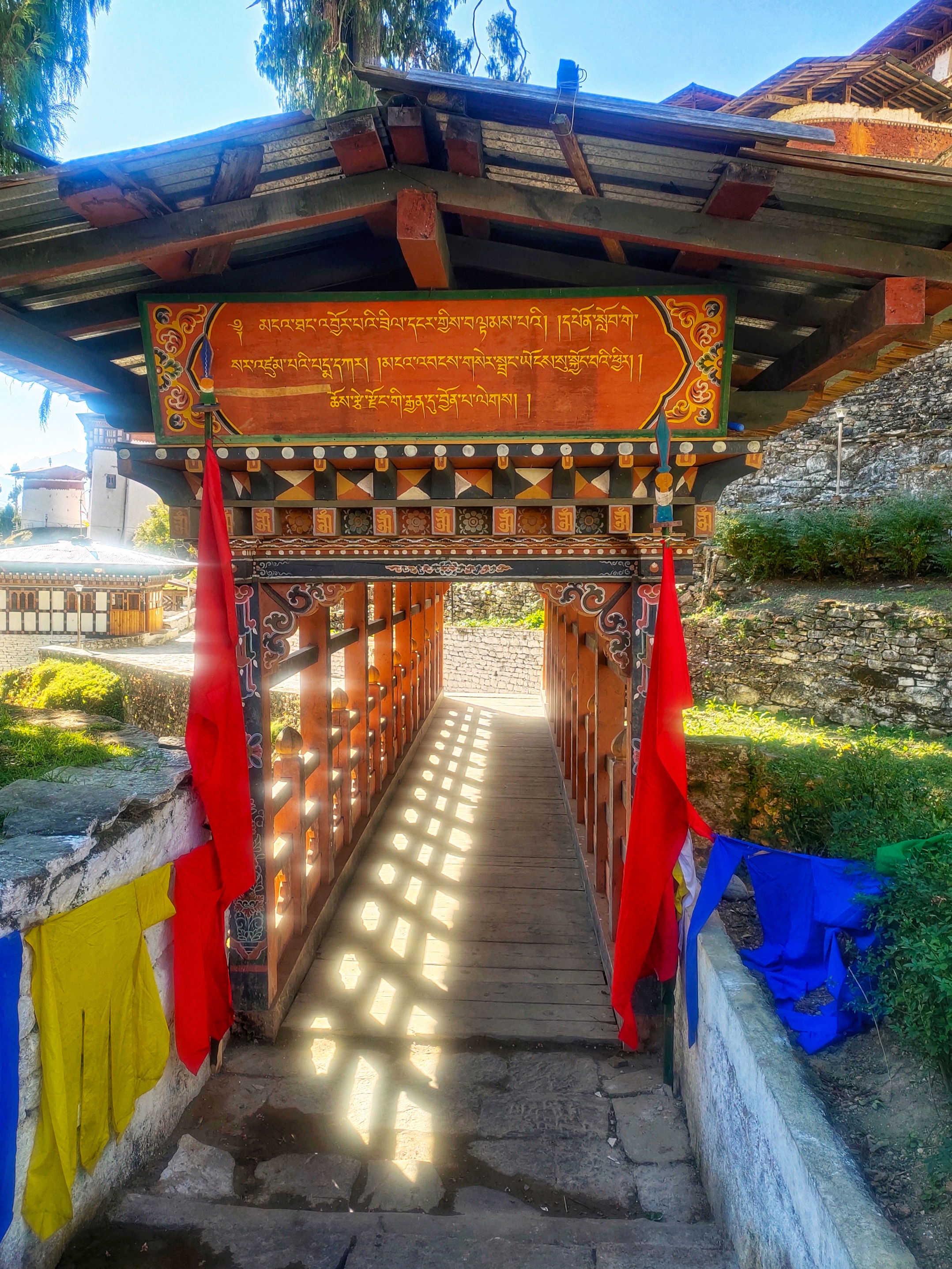 The Trongsa Dzong is an exceptional complex built at several levels. With nearly 25 temples inside the complex, the Dzong is a maze of alley-like corridors, beautifully paved courtyards andWide stone stairs. Besides the temples, there is a watchtower, a museum and a printing shop where religious texts are printed within the complex. The intricate architecture showcases the exquisite Bhutanese craftsmanship and rich traditional style. The Dzong was severely damaged by an earthquake in 1897 and was restored in 1927 by the then penlop of Trongsa, Jigme Namgyal. Visitors are allowed to enter the Dzong and enjoy its magnificent design and ambience. During our visit though, we were unable to enter as the Royal Family was visiting due to which entry was restricted. Wandering around this fascinating complex left us mesmerized and amazed at the stories wrapped in this magnificent place.

It was time to head back to Thimphu and we returned feeling refreshed and energized. Bhutan itself is a stunning country but these unusual attractions in Bhutan transport travelers to another world. A bond that began during my Bhutan road trip, led me back to this beautiful kingdom. This was another memorable weekend in the most untouched parts of this beautiful world. On our drive back, I slipped into a slumber and was soon dreaming of another hidden gem of Bhutan that I hope to explore in this exotic land soon.

Where does the black-necked crane Festival happen in Bhutan?

Black-necked crane festival is celebrated at the courtyard of Gangtey Goenpa in Phobjikha valley each year, mostly during the month of November. The locals celebrate the arrival of migratory birds from Tibet when the temperature drops over there.

How do you get to Phobjikha Valley?

Phobjikha Valley is 140 kilometers away from Thimphu and takes about 5 hours by car. There are buses that ply every Thursday and Saturday from Thimphu.

What is another name for Trongsa Dzong?

The official name of Trongsa Dzong is Chhoekhor Raptentse Dzong but sometimes it is also known as Choetse Dzong.

November to February is the period where Black-necked cranes migrate to Phobjikha valley. A void May - August as the monsoons are heavy and the area is prone to landslides.

Bhutan has rich art & culture, which is very passionately preserved by the locals. This region is especially known for its stunning weaving and other traditional arts and crafts.

Bhutanese cuisine is full of flavor. Rice is a staple, which is cooked both with meats and veggies into a one-pot meal. Besides this, momos and soups are also a MUST try while in this exotic land.

Bhutan is a safe place to travel to as the people are simple and warm hearted. What one should be cautious about is the travel. The terrain in this country is rough and landslides are common which can be risky.

Some parts of central Bhutan are completely off the tourist radar. There are numerous routes to explore and unique places to visit in Bhutan.

Considering the terrain, comfortable shoes and clothing is a must. Warm clothes and a raincoat is mandatory. For those with motion sickness, do not forget your meds. Insect repellent is also recommended.