The Weird and Wonderful Capital of Texas

Close proximity to Houston, where I live makes a visit to the capital of Texas rather alluring. Confused? You must be thinking what is the capital of texas then?. Many people have this misconception that Houston is the capital of Texas. No, it’s not. The capital city is Austin. At a mere two-and-a-half-hour drive from Houston, it is perfect for a weekend trip. Austin has a rather unique motto, “Keep Austin Weird”, which got me really curious. I had to explore further and that’s how my first trip happened.

Since then, I have been to Austin umpteen times. Wondering why? Well, every time I have someone visiting me in Houston, a trip to Austin becomes almost mandatory. Its proximity to home and the place itself makes it the perfect "sightseeing" option. I am now as good as a local guide for Austin. No complaints there because I get to visit this beautiful place over and over again. Austin has something to offer to every traveler and everyone that I have taken to Austin has had an amazing experience.

The Texas State Capitol in Austin

Everything is bigger in Texas! So it is said and it is no exaggeration. Take for example the Texas State Capitol. This mammoth architectural structure is astounding. Located in the heart of downtown Texas, the reddish granite Texas statehouse is testimony to the rich history embedded there. Its old world architecture stands in stark contrast to the modern buildings surrounding it. It was placed on the National Register of Historic Places in 1970 and designated a National Historic Landmark in 1986. The significance of this place is as impressive as the structure itself. As per Texas State Capitol facts, more than 1,000 people were involved in the construction of the Capitol. Spread across 360,000 square feet with 400 rooms and 900 windows, the height of Texas State Capitol is 302 feet that makes it the tallest State Capitol building in the United States. You may wonder "is the Texas State Capitol taller than the US Capitol?", yes it is. Both the interior and exterior of the building embodies such immense symbolism that I get lost in time just absorbing the magnificence of this impressive building. 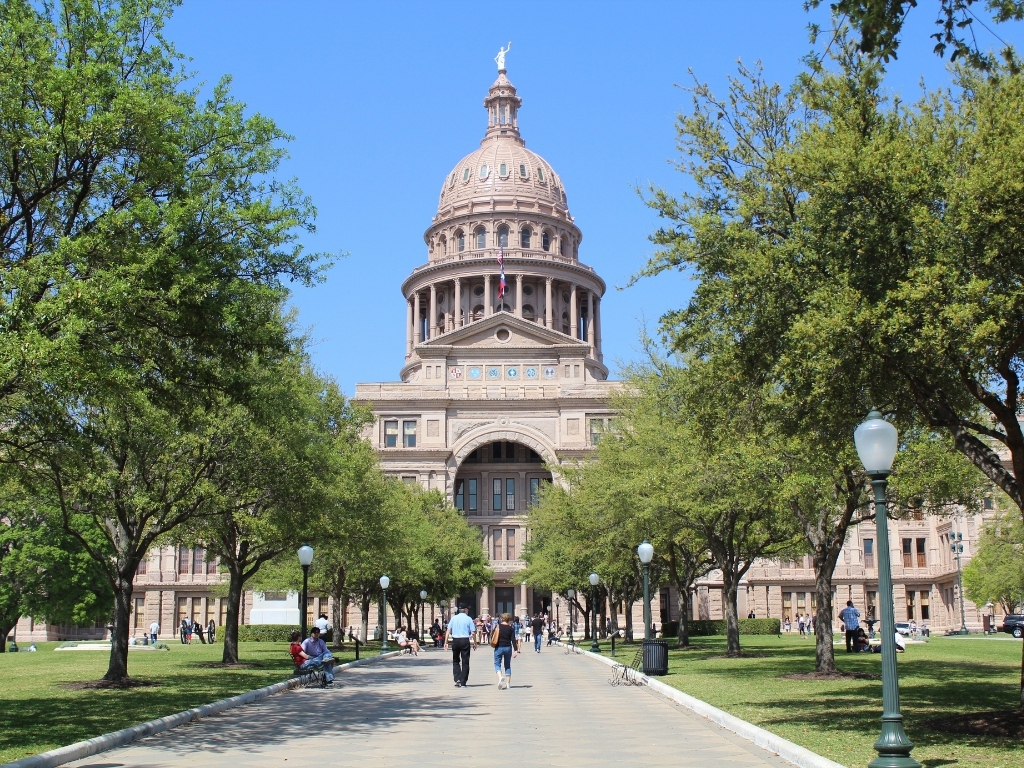 When was the Texas Capitol built? It was the year 1888.

Why is the Texas State Capitol important? Well, the free 30-minute Texas Capitol tours are the best way to learn. It gives insights about the history of the building while we walk the historic halls and take pictures. The interior of the building has stunning architecture. The Capitol's dome is truly mesmerizing. In the middle is a metal star with "Texas" spelled between the star points. The star has a huge significance in Texas, popularly known as "Lone Star State". When Texas gained independence from Mexico in 1836, a new flag was imperative which gave birth to the "Lone Star" clearly labeled Texas. The lone star represents defiance, pride and, most importantly independence. This lone star has represented Texas since then. The tiles are symmetrically laid producing impressive echoes. I always wonder what's on top of the Texas Capitol building? It is the Goddess of Liberty statue, which is 16 feet tall and weighs 2,000 pounds. The gigantic sword and a golden star that she carries are symbols of justice and Texas pride. The original statue was made of iron and zinc which was damaged in the 1983 Capitol fire. It was replaced with the current aluminum replica. 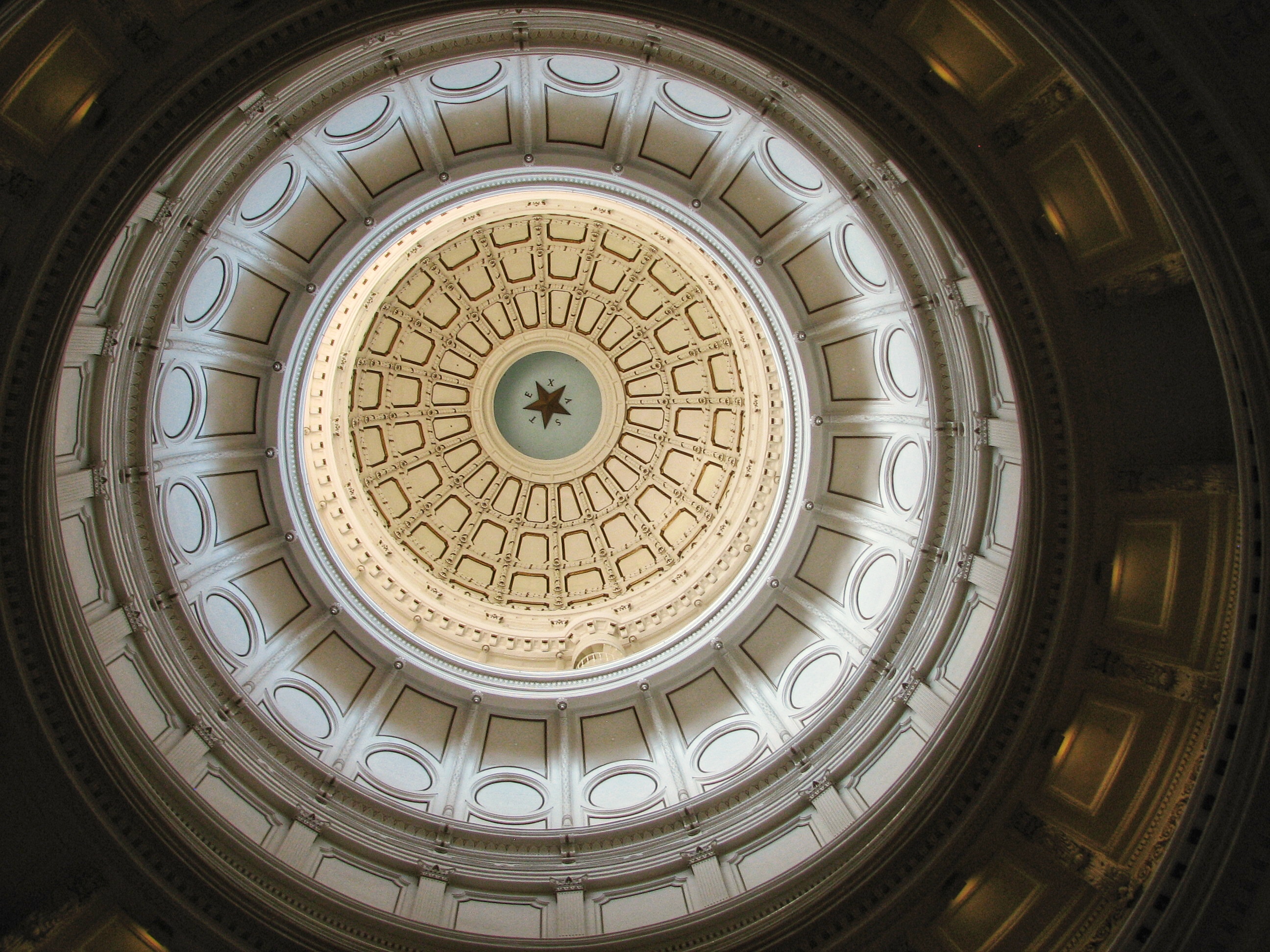 The Capitol dome, an architectural masterpiece

Did you know that the Texas State Capitol structure you see today is not the original structure? Yes, it has undergone restoration and expansion since 1839 when a log cabin with 2 large rooms and several smaller meeting rooms served as the Capitol. A fire breakout and a couple of renovations later, the existing spectacular structure came into existence. The capitol at a height of 95 meters, is a rectangular building with a four-storey central block and symmetrical three-storey wings extending to the east and west. Each storey has significant functional spaces that serve the various activities of the government. 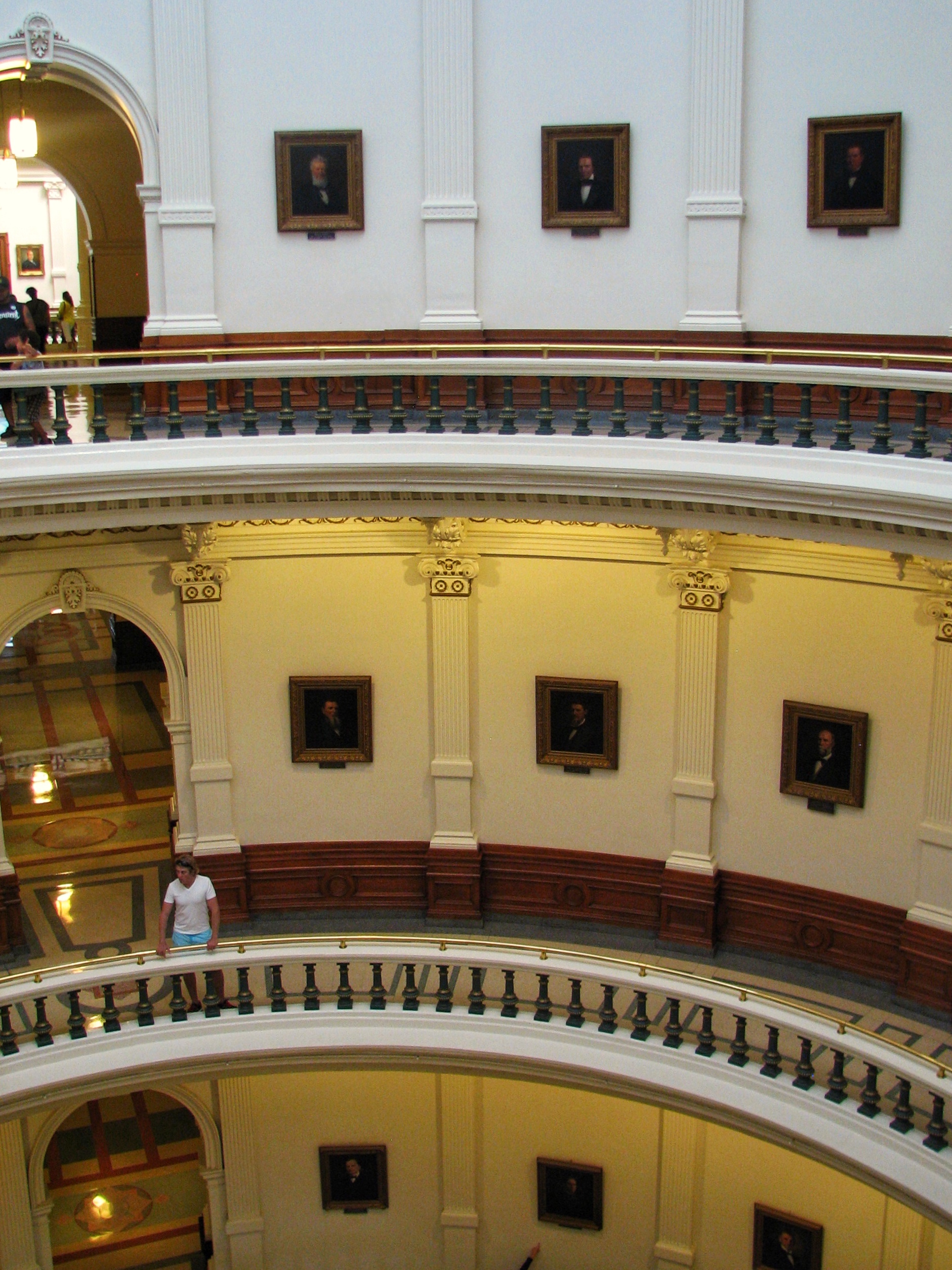 View of the 4-storied Rotunda leading up to the dome

On the floor of the Rotunda, which is the circular room, there is a circular collection of seals representing the six flags that have flown over the state. The seals stand for Texas under Spain, France, Mexico, and under the Confederacy. In the middle is a seal representing Texas in the United States, with oak and olive branches painted to symbolize strength and peace. 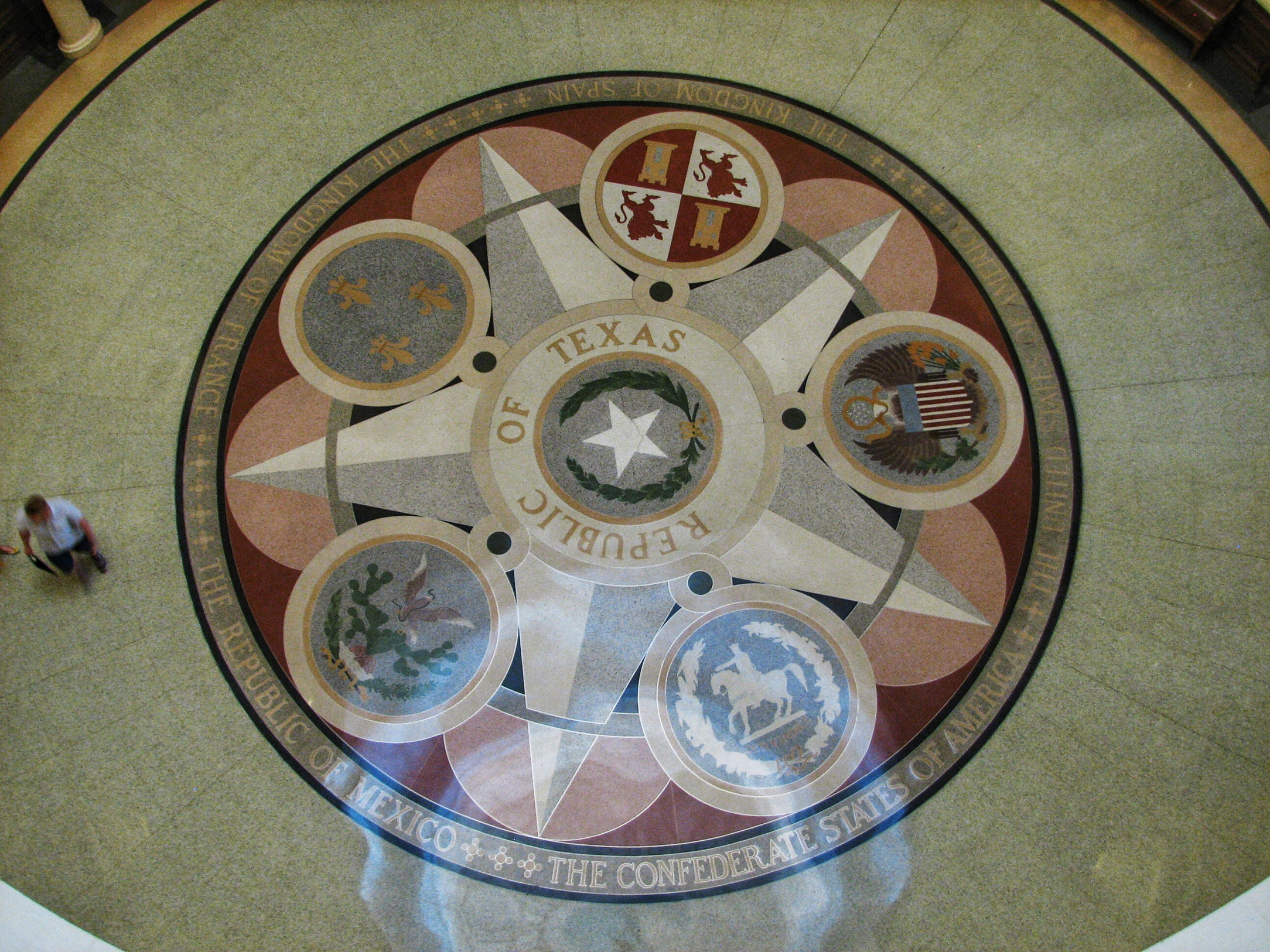 We wandered around this building intrigued and fascinated by each and every part. From original walnut desks to the stately portraits displayed on the walls, the Senate Chamber resonates with the history of Texas. Two of the most impressive and historically significant works of art in the entire Capitol: Dawn at the Alamo and The Battle of San Jacinto hang behind the Senate Chamber. 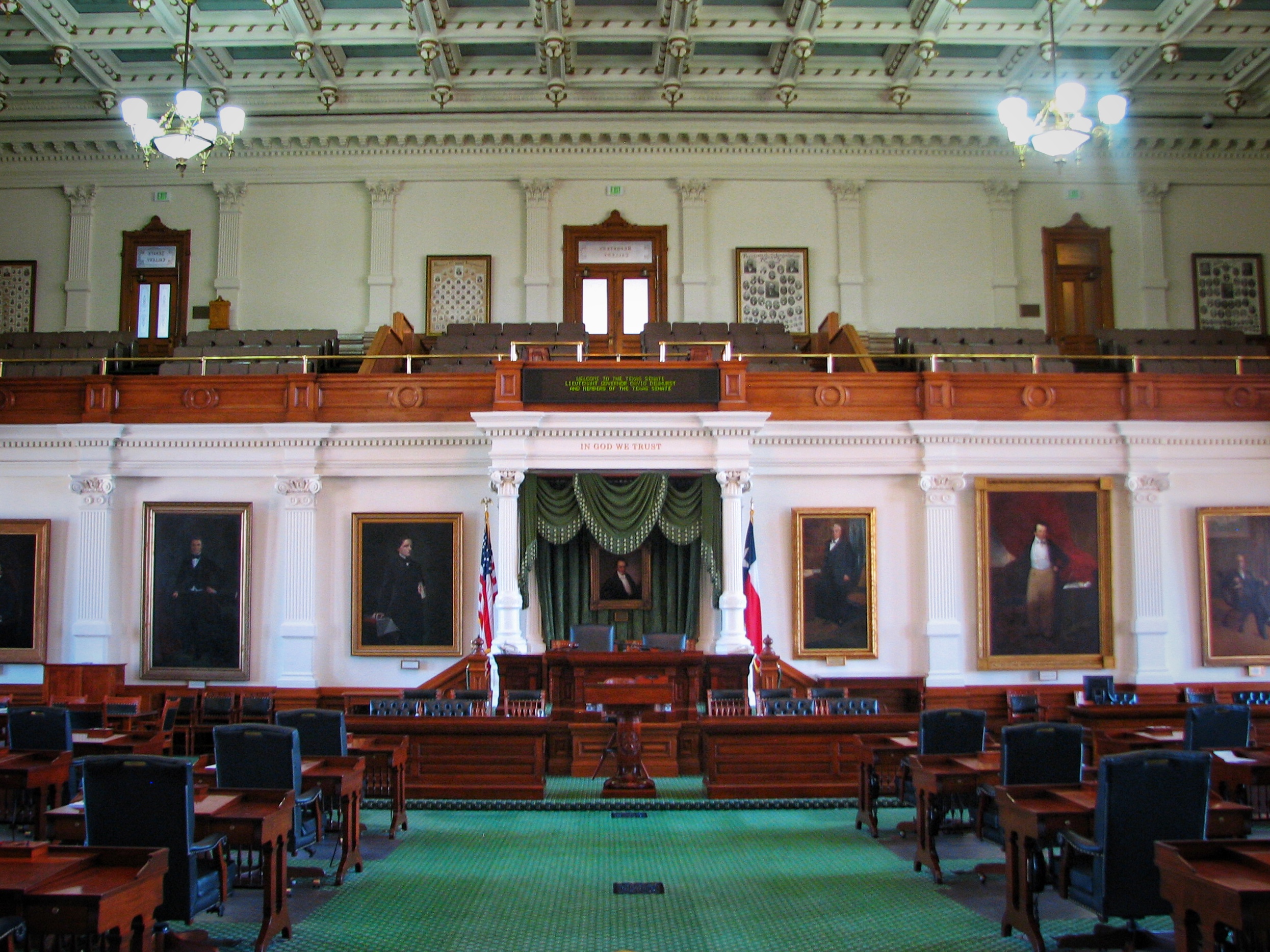 Exquisite walnut desks from the 1800s, modified to install microphones and telephones

The House of Representatives is the largest room in the Capitol and showcases the grandeur of Texas. The sheer size and opulence of this oak-filled room is overwhelming. The brown leather armchairs are embossed with the signature State of Texas seal which adds to the exclusivity of the decor. One of the most historic and attractive features of the House of Representatives room is displayed on the ceiling. Looking up one notices the most exquisite chandeliers that adorn the ceiling. These brass chandeliers were installed in 1890 and are masterpieces of extraordinary craftsmanship. When you look closely at the star-shaped lighting, you will notice that the lightbulbs are arranged in the form of letters. Guess what they read...Yes, TEXAS! 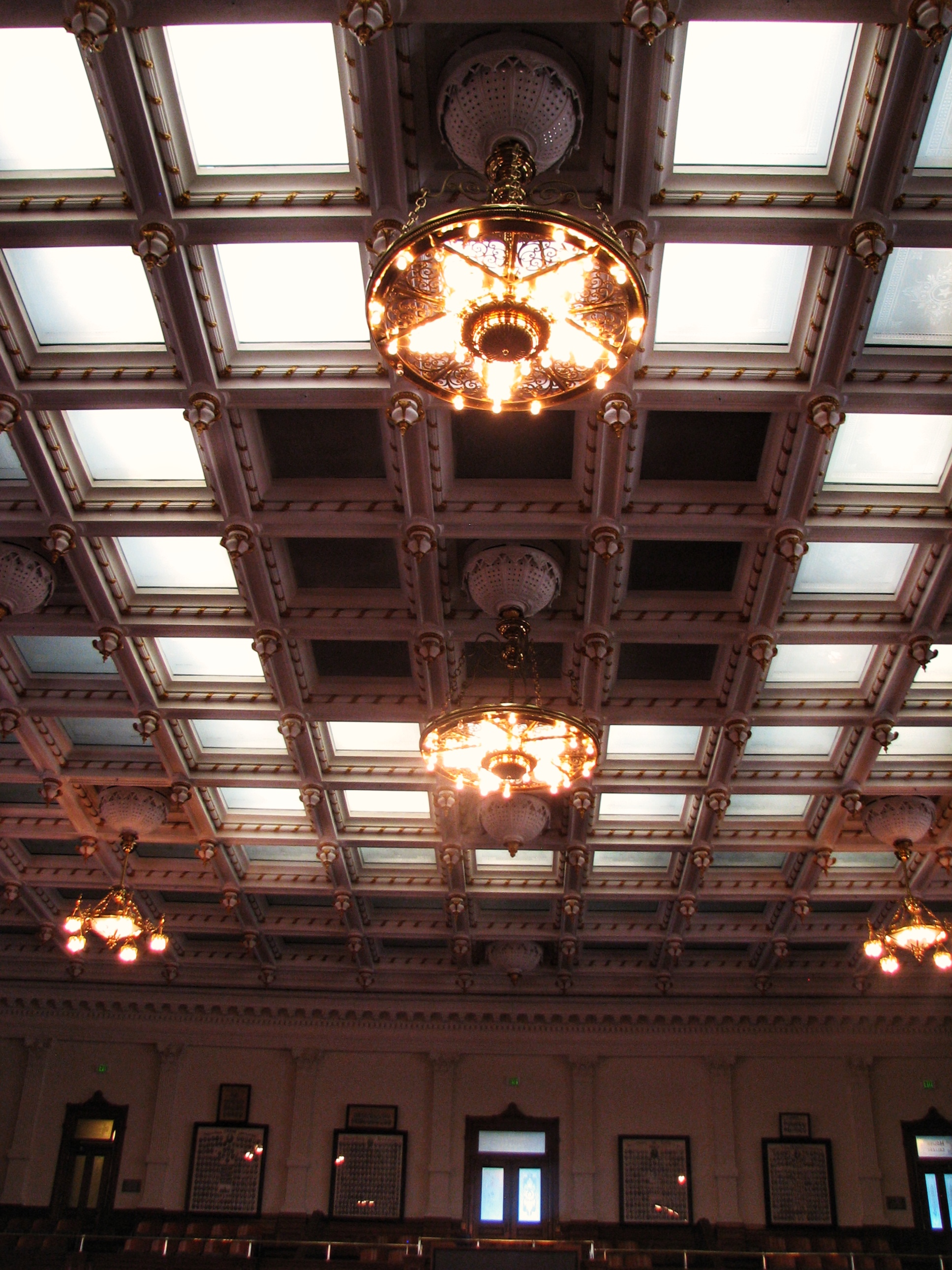 From one historic site to the other...Mount Bonnell! This historic landmark is the highest point in Texas at 785 feet above sea level. Also known as Covert Park Austin, it is a prominent point alongside the Lake Austin section of the Colorado River. It has been a popular tourist destination since the 1850s.While it is not exactly a mountain, it is a gorgeous hill that overlooks Lake Austin Park. 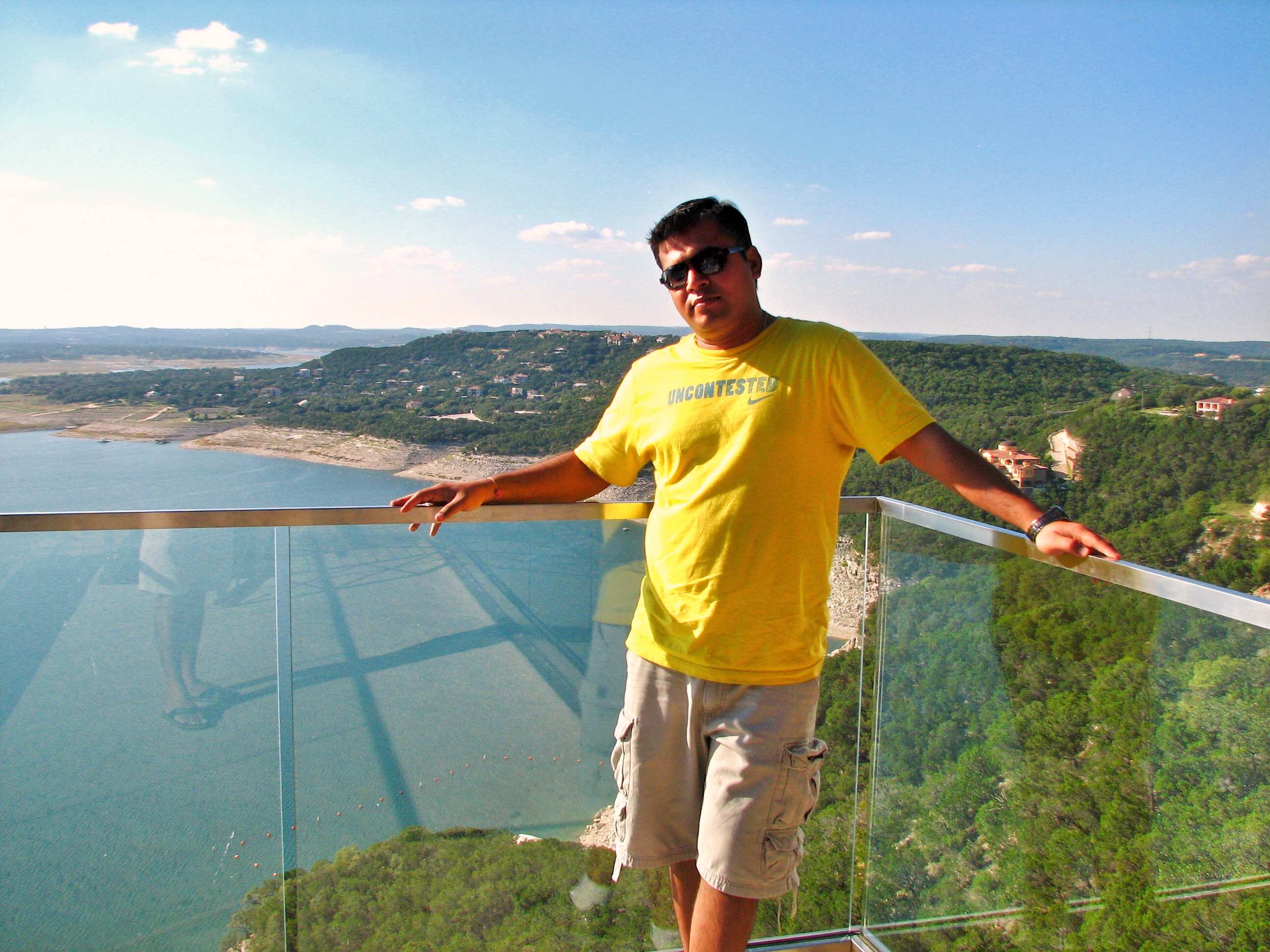 A short climb takes you to the summit that offers a spectacular view of Lake Austin on one side and downtown Austin on the other side.It also offers some great views of Pennybacker Bridge, also known as 360 bridge. It makes for a perfect picnic spot with a few tables laid out. 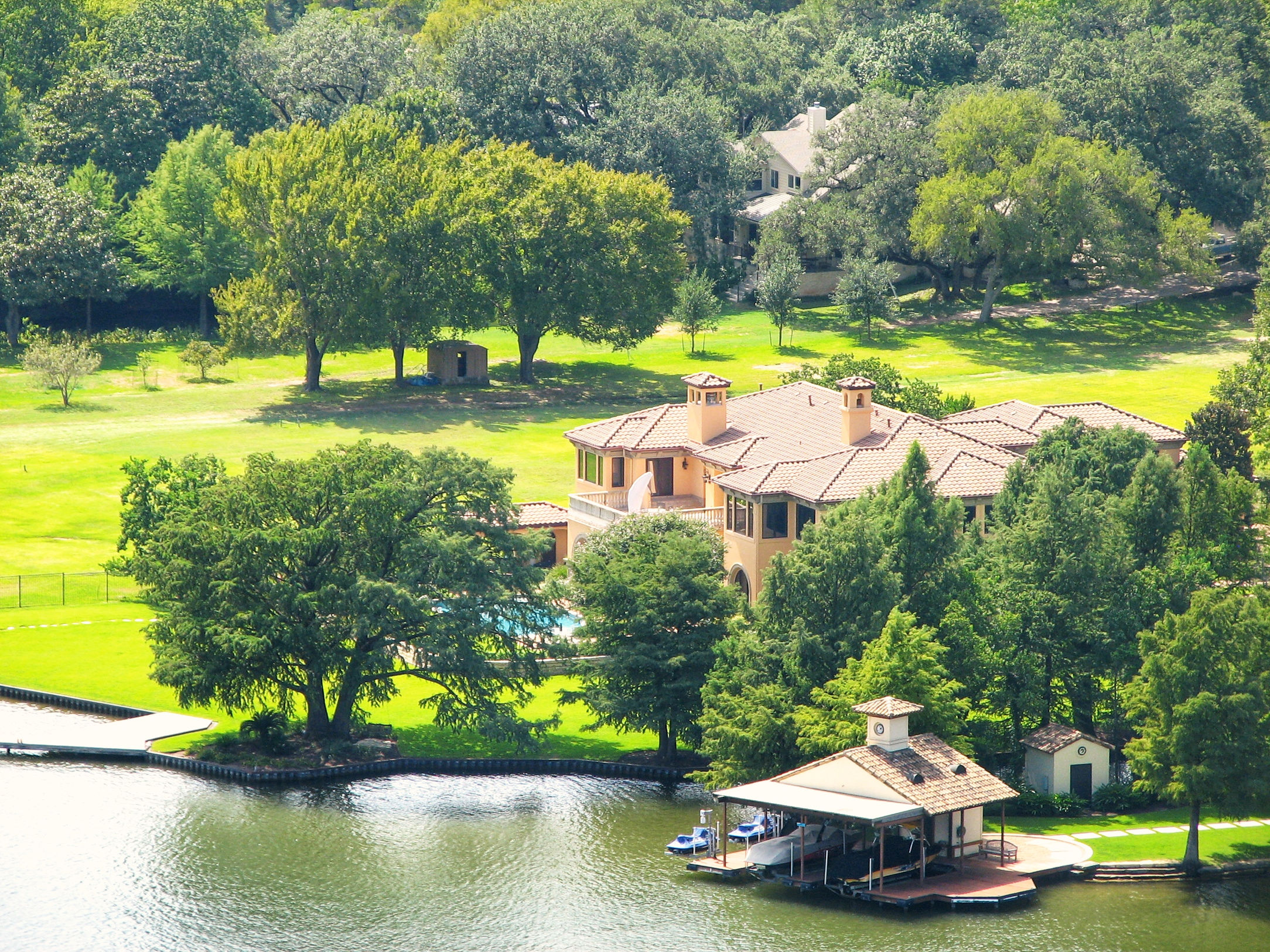 Legend has it that Mount Bonnell was once called Antoinette's Leap, named after a damsel who leaped to her death to avoid capture from Indians that killed her lover, who fought to his death to defend her. Narrating this story always adds a romantic vibe to this place and makes it more endearing. The mount offers a vista for viewing the Austin Texas Skyline, Lake Austin, and the surrounding hills. The beautiful houses surrounded by greenery add a Spanish flavor to the place owing to the Madrid-style architecture and landscaping. 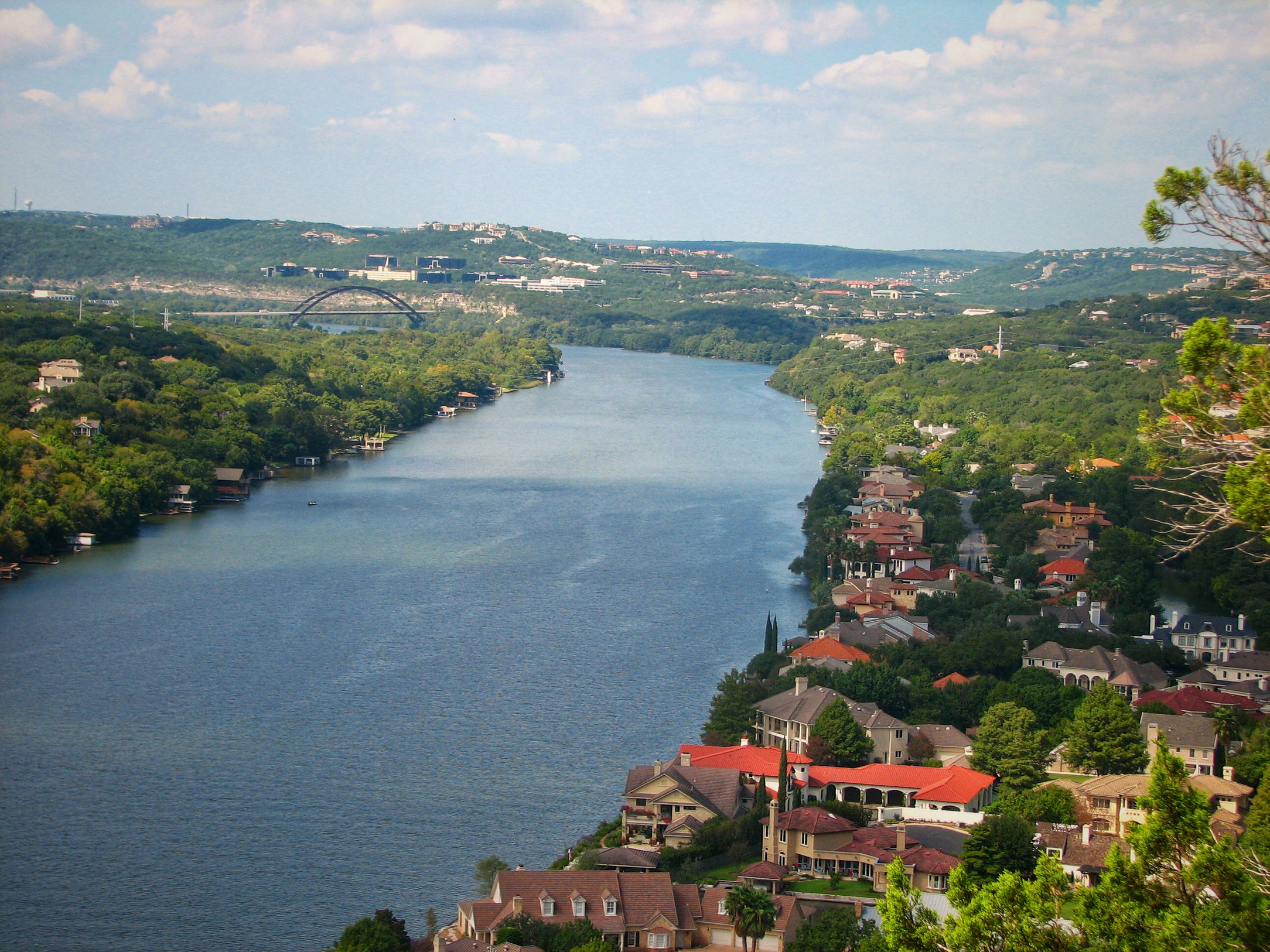 A feeling of Madrid in Austin 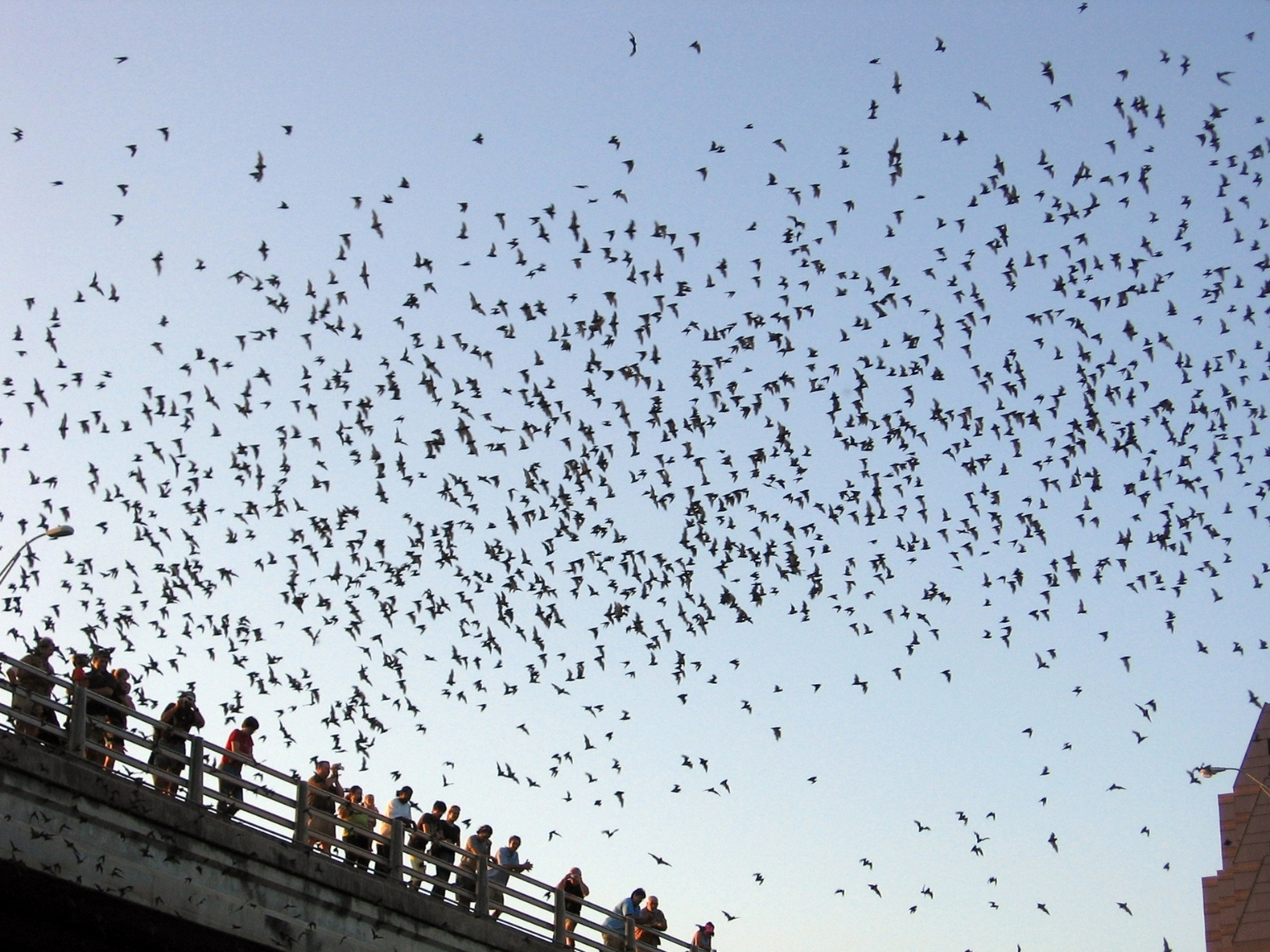 The bridge is home to the largest urban bat colony in the world; 1.5 million Mexican free-tailed bats, also known as South Congress Bridge Bats. After sunset, the show begins. Thousands of bats cascade over the Lady Bird Lake forming a surreal dark cloud as they ascend into the night sky. A vantage point to view this spectacle is the Statesman Bat Observation Center. This special experience is a validation of the weirdness of Austin. 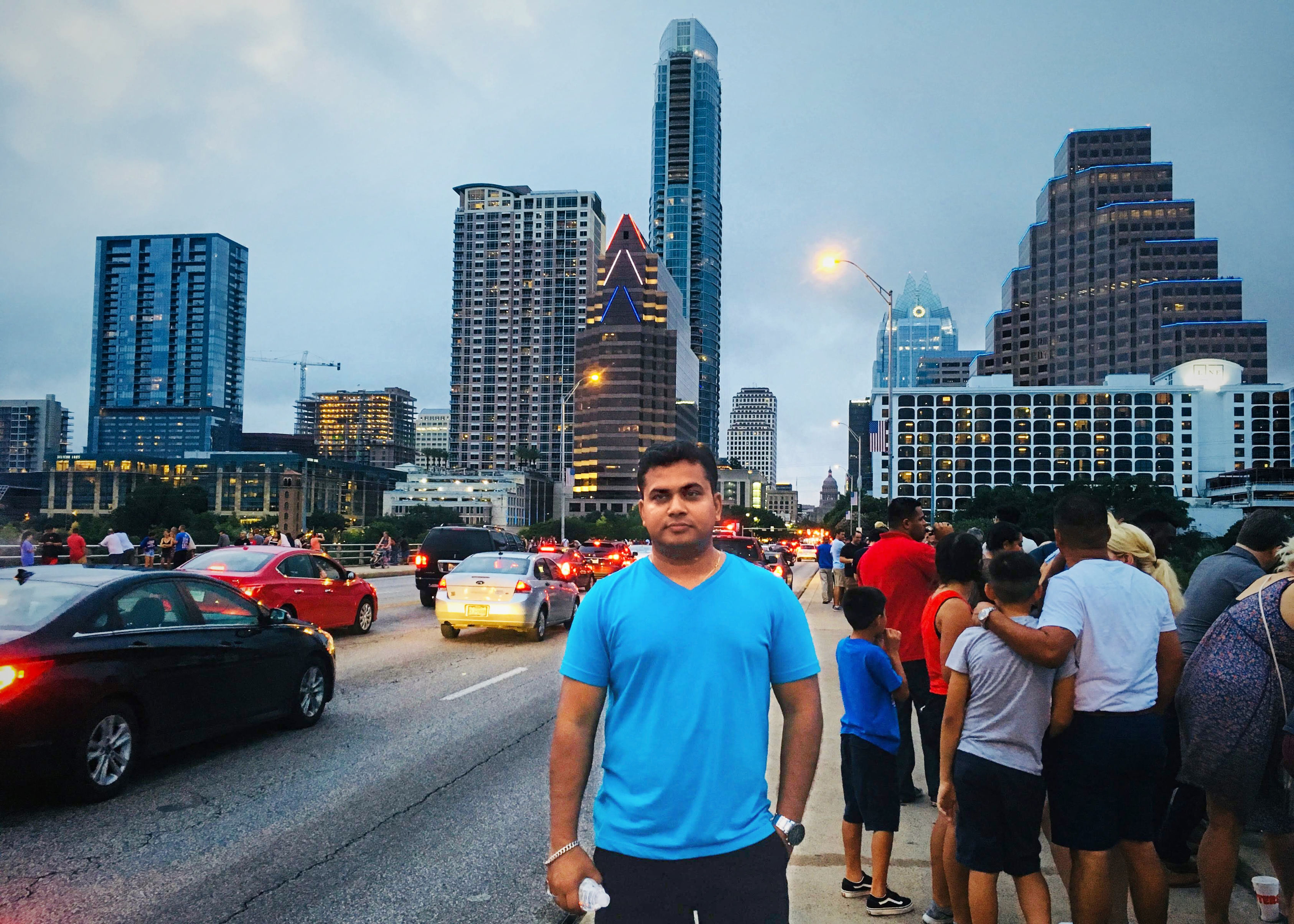 While wandering around the city, aromas of the best bbq in Austin and tacos will tingle your senses. Barbeques is a culture in Austin and your visit to this unique destination is incomplete without indulging in this deliciousness. Food trucks and street stalls as well as gourmet restaurants serve a variety of the best tacos in Austin. Being a foodie, each time I visit, I try a new flavor of these delicacies. 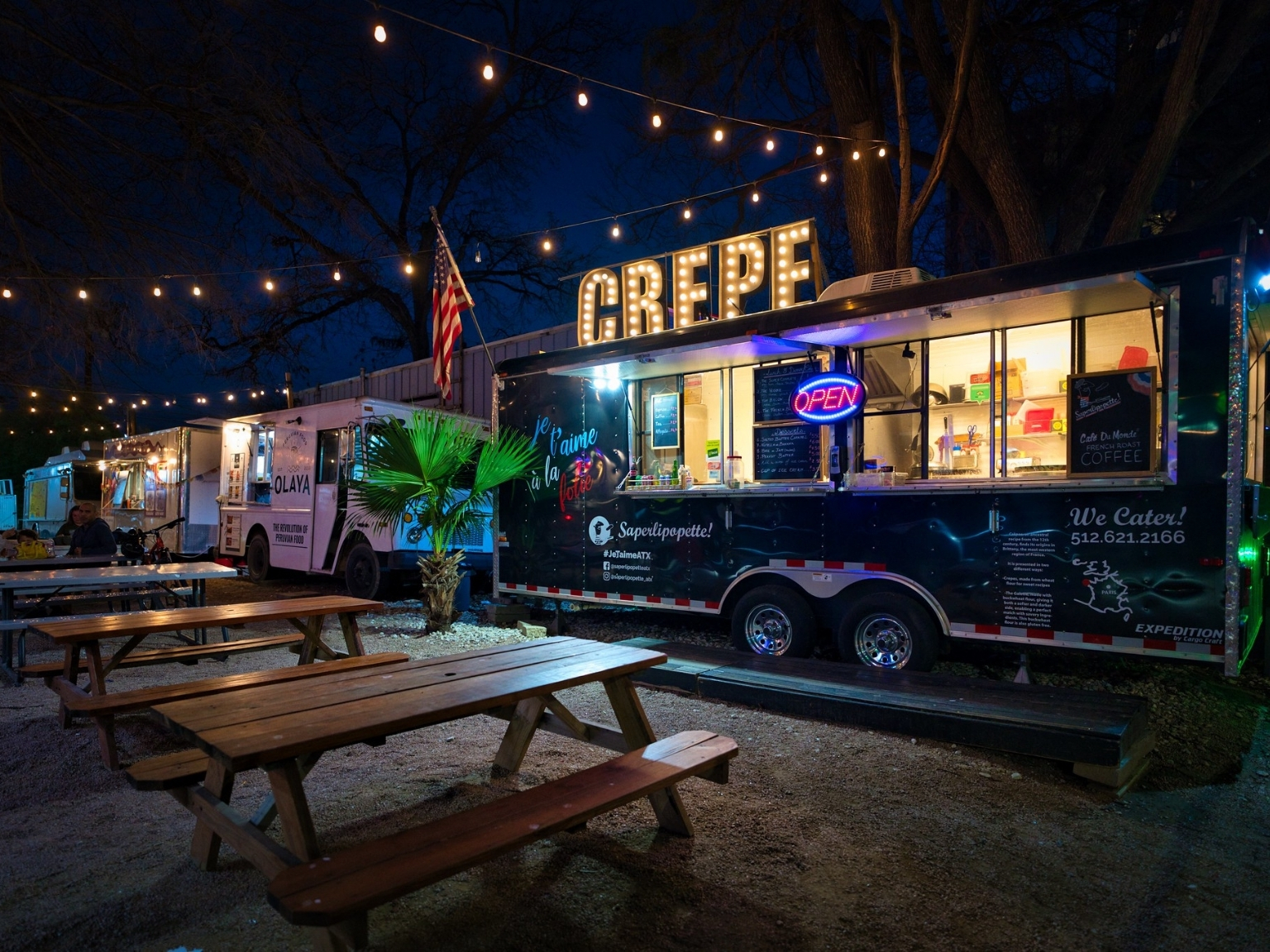 Austin is endowed with natural beauty and Mckinney Falls State Park is another one of its iconic landmarks. Despite being within city limits, the park feels like a world away from the city. The park is spread across 641 acres with over 80 campsites and beautiful hiking and biking trails. It is home to Onion Creek Park where visitors can swim, fish or just laze around. I explored the place and spotted a prehistoric rock shelter National Register of Historic Places and remnants of Thomas McKinney's old Texan homestead. The park is home to one of the oldest bald cypress trees in Texas, fondly called "Old Baldy". This 100-foot tall cypress is over 500 years old.Serene natural beauty, plenty of outdoor activities and proximity make the park a favorite for locals and tourists alike. 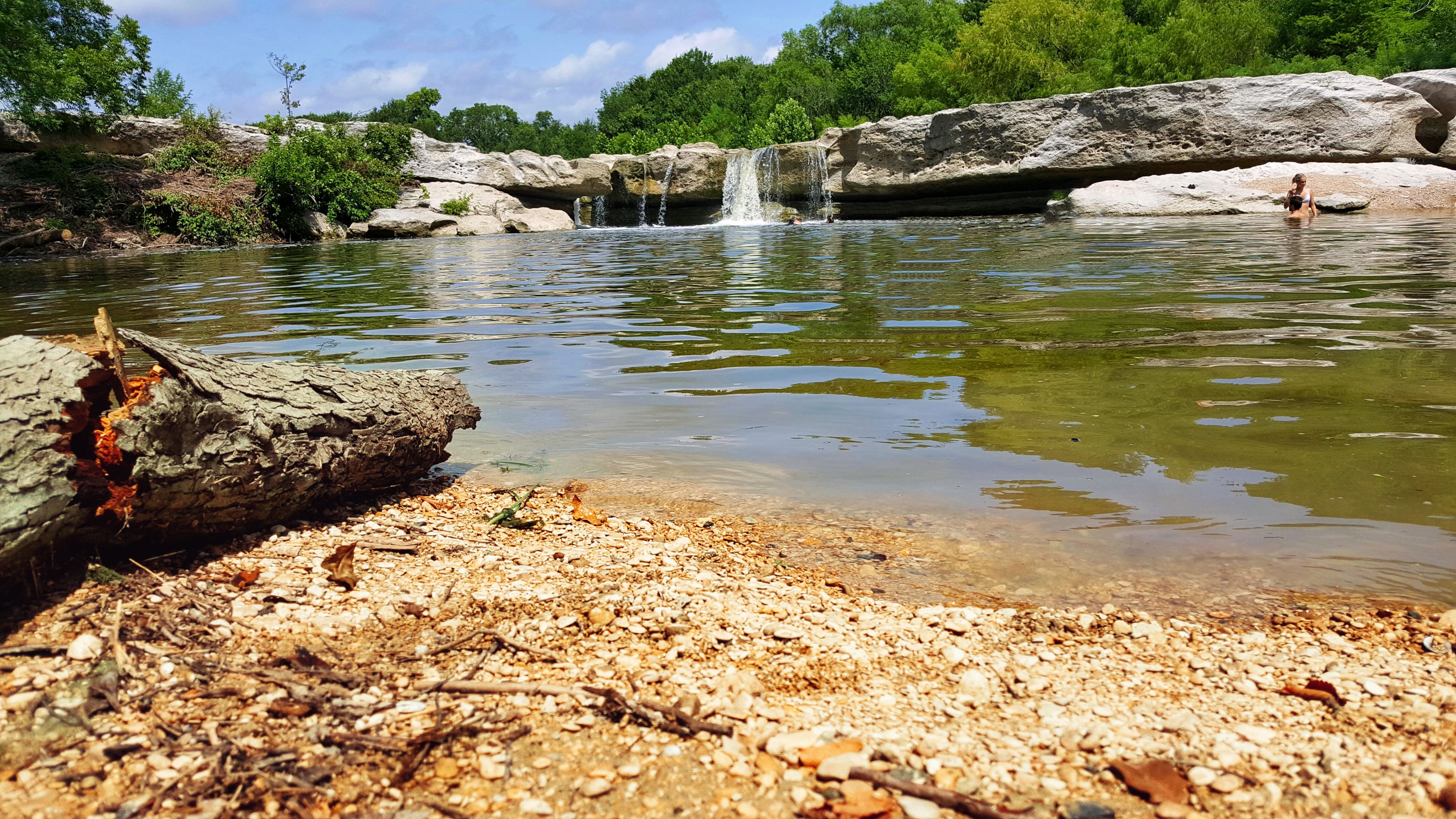 Each time I take my guests to Austin, I am always asked why it is called "weird". Well, this puts me in an awkward spot because I hesitate to take everyone to one of the weirdest places in Austin. But if you are "adventurous" enough, then check out the "Hippie Hollow Park". Don't be surprised if the parking attendant casually mentions that "clothing is optional" to enter this park. Reminiscing about that sentence I heard on my first ever visit to Hippie Hollow park still has me in splits. September - November and March - May are the ideal times to visit when the weather is favorable. Those seeking the Bat Watching experience can plan for July-August as that is the peak season for this spectacle.

Austin is known for its creativity and rightly so. There are world-class museums and numerous art centres that showcase the multifaceted culture of the city.

Tex-Mex, juicy barbeques and breakfast tacos are the local cuisine of Austin. A must try for all foodies.

Austin is a very safe city, overall. Of course one is advised to exercise caution to have a hassle-free trip

Austin has something to offer to every traveler. From weird museums to the nude park, there are several offbeat attractions in this emerging destination.

While visiting Austin, make sure you carry your walking shoes to make the most of parks and outdoor activities