Let’s roll back the clock and take a glimpse of Hampi before I continue the second part of my travel story. Hampi was one of the richest cities in the world during the peak of Vijayanagara Empire. In a span of 200 years, a total of four dynasties ruled Vijayanagara Empire and is also called City of Victory. Hampi was also one of the biggest trading centers of the world. Hampi was the capital town of Vijayanagara Empire during the 14th Century and many kings ruled this historical kingdom. Hampi succumbed to attacks carried out by five Deccan Sultans namely, Bidar, Bijapur, Ahmednagar, Golconda and also Berar. They attacked Hampi in 1565 and looted it for approximately six months.

I am sure you would have enjoyed reading Part 1 of my travel story, which focused on the introduction and history of the Hindu empire in Hampi. In this part, my focus is more on the intricate architecture and monuments of Hampi, which are of great interest to historians and archeologists world over, the reason UNESCO declared Hampi a World Heritage Site.

We managed to identify a nice, mature gentleman, a local, who was our guide for the next two days. He planned to take us to all the places one by one from morning to late evening so that we cover some of the MUST visit archaeological sites. This is possible only with an experienced guide. It is close to impossible to understand this entire area full of amazing sculpture and splendid architecture on your own.

The Virupaksha temple is dedicated to Lord Shiva, also famously known as the Pampvathi Temple and is situated in Hampi Bazaar. The most fascinating part about this temple is the three stunning gopuras and the high tower that stands tall at a height of 160 ft. at the main entrance. The temple also has an elephant called Lakshmi.

Virupaksha temple situated in the center of Hampi

Among the many Hampi attractions, the Vijaya Vittala temple probably houses the most exquisite pieces of architecture. This temple is built in dedication to Vittala who is an avatar of Vishnu. It is one of the largest structures and the craftsmanship is unmatched. It is a paradise for those who love architecture. The temple was built in the 15th century and the kings, who ruled after, have all contributed to enhancing the beauty of the temple. This exceptional structure is because of their efforts. The highlight of this iconic temple is the stone chariot. It also has fascinating musical pillars. Each pillar depicts a musical instrument and also serves as support for the entire structure. These pillars have been arranged around the main pillar of the temple which, when struck, gives out 7 notes from each of the instruments that it represents. In recent times, visitors are prohibited from going close to the stone chariot, so no more close ups here. 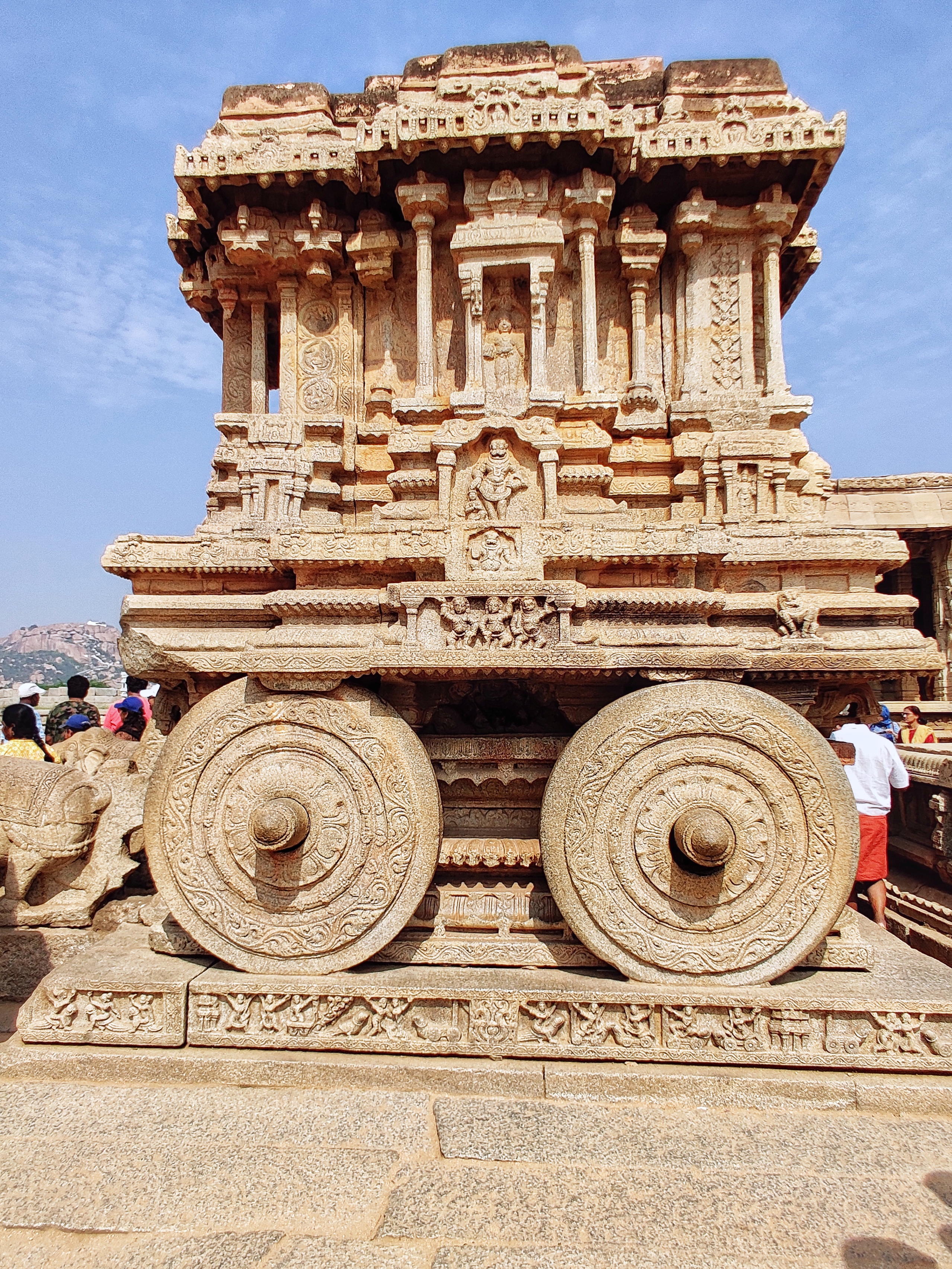 The British were suspicious of these pillars and went on to cut them open. To their surprise, they found nothing hidden inside that produced the sounds. The cut made by the British can still be seen. This temple is also a venue for the famous Purandaradasa festival that is held there annually.

Built in 1534, Achyutaraya Temple displays typical Vijayanagara style of architecture. This temple is dedicated to another form of Lord Vishnu and it was built by an officer in Achyuta Raya's court and hence the name. Situated in a valley between two stunning hills namely, Gandhamadana and Matanga Hills, the scenic beauty will blow your mind. The temple courtyard is lined with intricately carved pillars and houses an antarala, rangamantapa and garbhagriha. Owing to its location, it is less crowded. Definitely one of the temples you must explore on your visit to this religiously and historically significant place.

Breathtaking view of Achyutaraya Temple while trekking at Matanga Hill

This is another fantastic stone carving of Nandi, the mount of Lord Shiva. This enormous monument is located at the east end of Hampi Bazaar and faces the famous Virupaksha Temple. The statue is a masterpiece of ancient architecture and attracts a large number of tourists every day. It is also one of the most frequently visited historical places in Hampi. 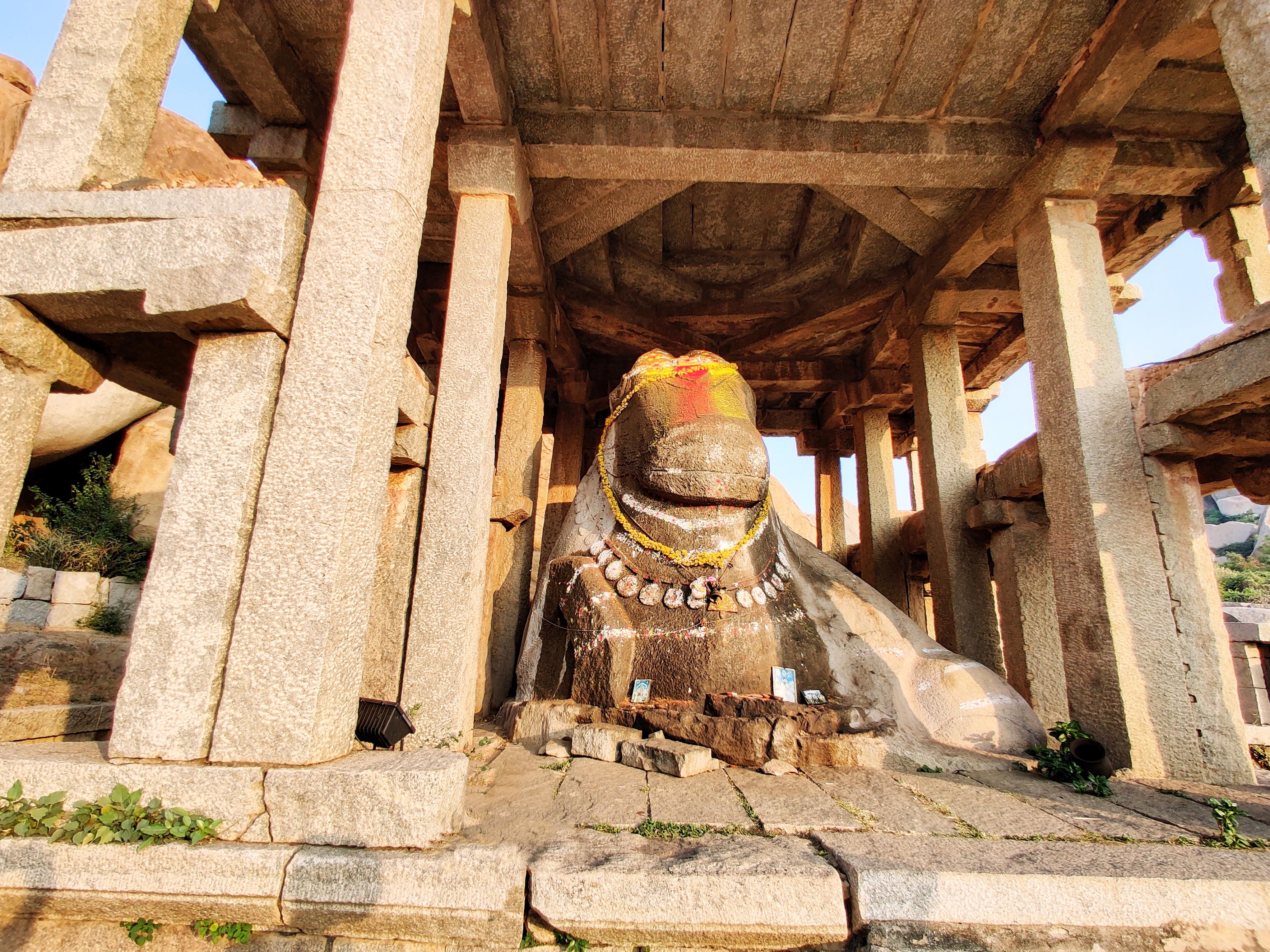 This is famously known as Tulapurushandana. It is situated south west of the Vittala Temple. This balance is five meters tall and forms an archway like structure that has been carved from stone. It is believed by many that during lunar and solar eclipses and during Dussehra, the king was weighed with gold and many other precious stones. These jewels were then given away to the priests of the temple. On observing closely, three loops are seen that may have been used by the king as support while weighing himself. There is an image of a king on one of the pillars; which is believed to be that of King Krishna Deva Raya and his wives. 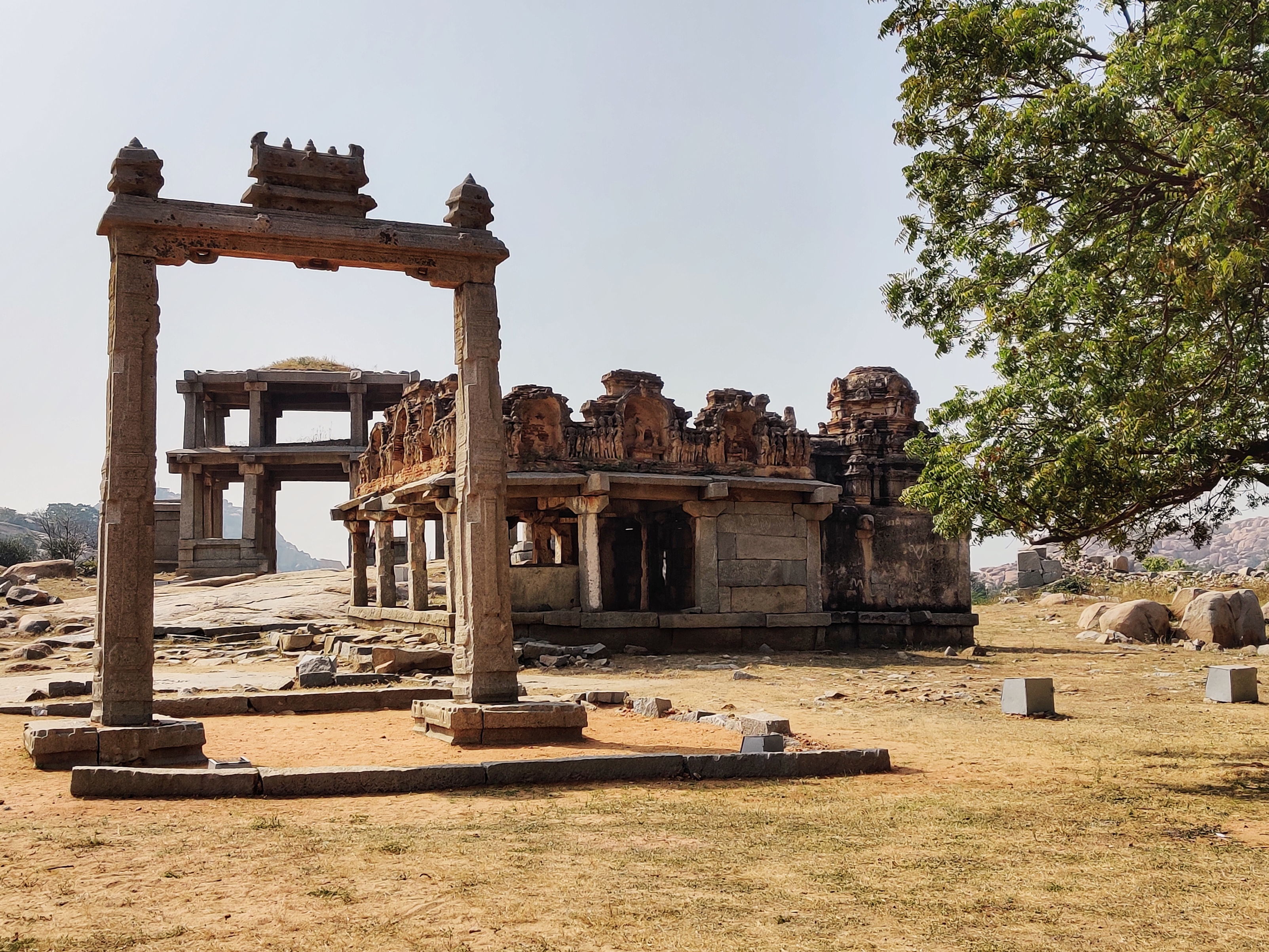 Lotus Mahal is another example of exceptional architectural design, and of course, as the name suggests, is similar to a lotus. The central dome looks like the flower and other areas of the palace including passages, walkways and balconies resemble the petals. 20 plus pillars support the extraordinary structure. 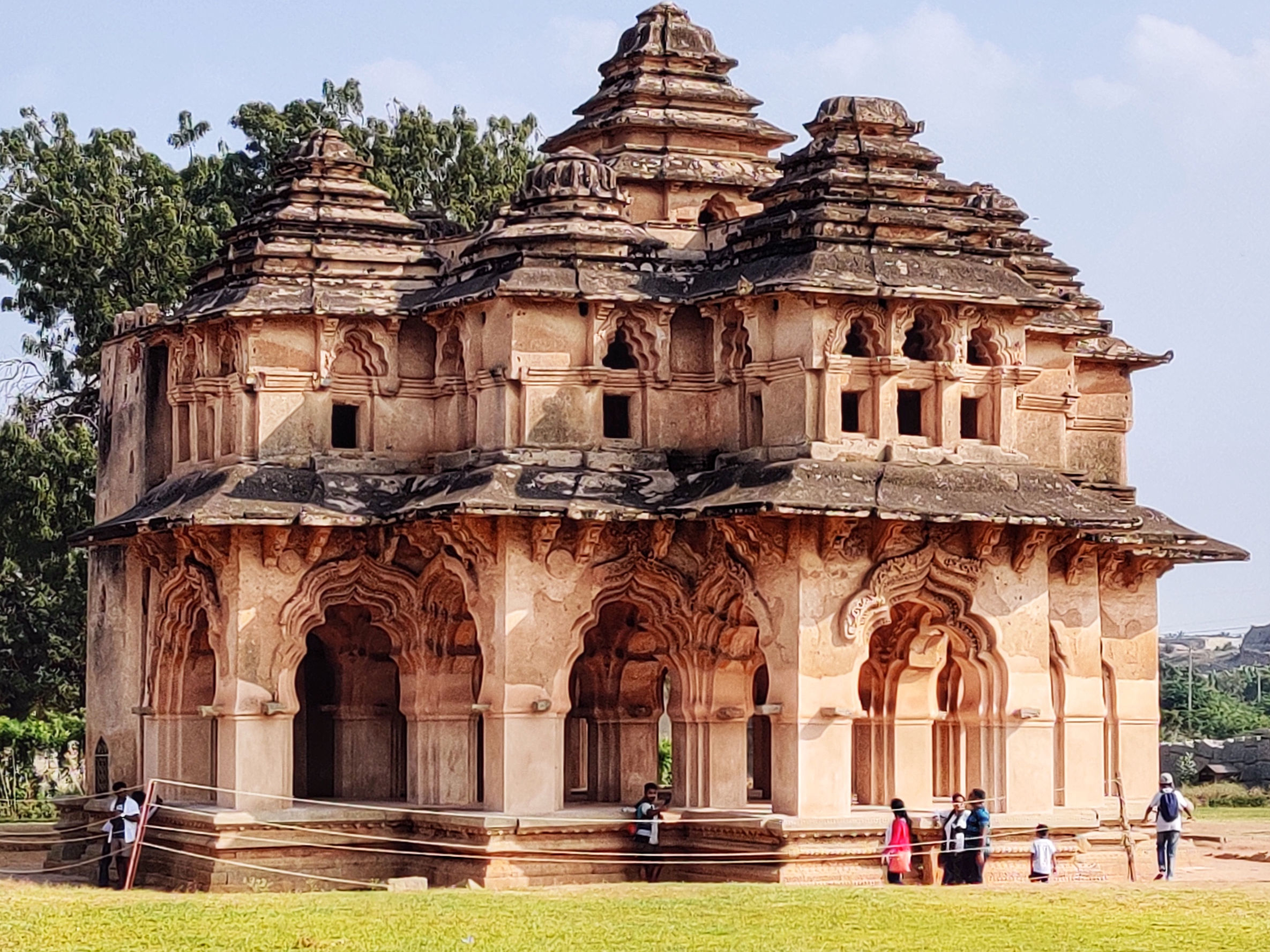 History speaks for itself when you are in Hampi. The large bathing place known as Queens Bath is another exceptional masterpiece. This ornate structure of a colossal bath impresses visitors to this day. Built almost 500 years ago, the structure is intact revealing the quality of construction during ancient times. The design and engineering is truly exceptional. It has a large bath in the center and beautiful "Jharokhas" type architecture across the entire corridor. Our guide enlightened us that kings believed in total privacy and hence this was constructed for their queens. 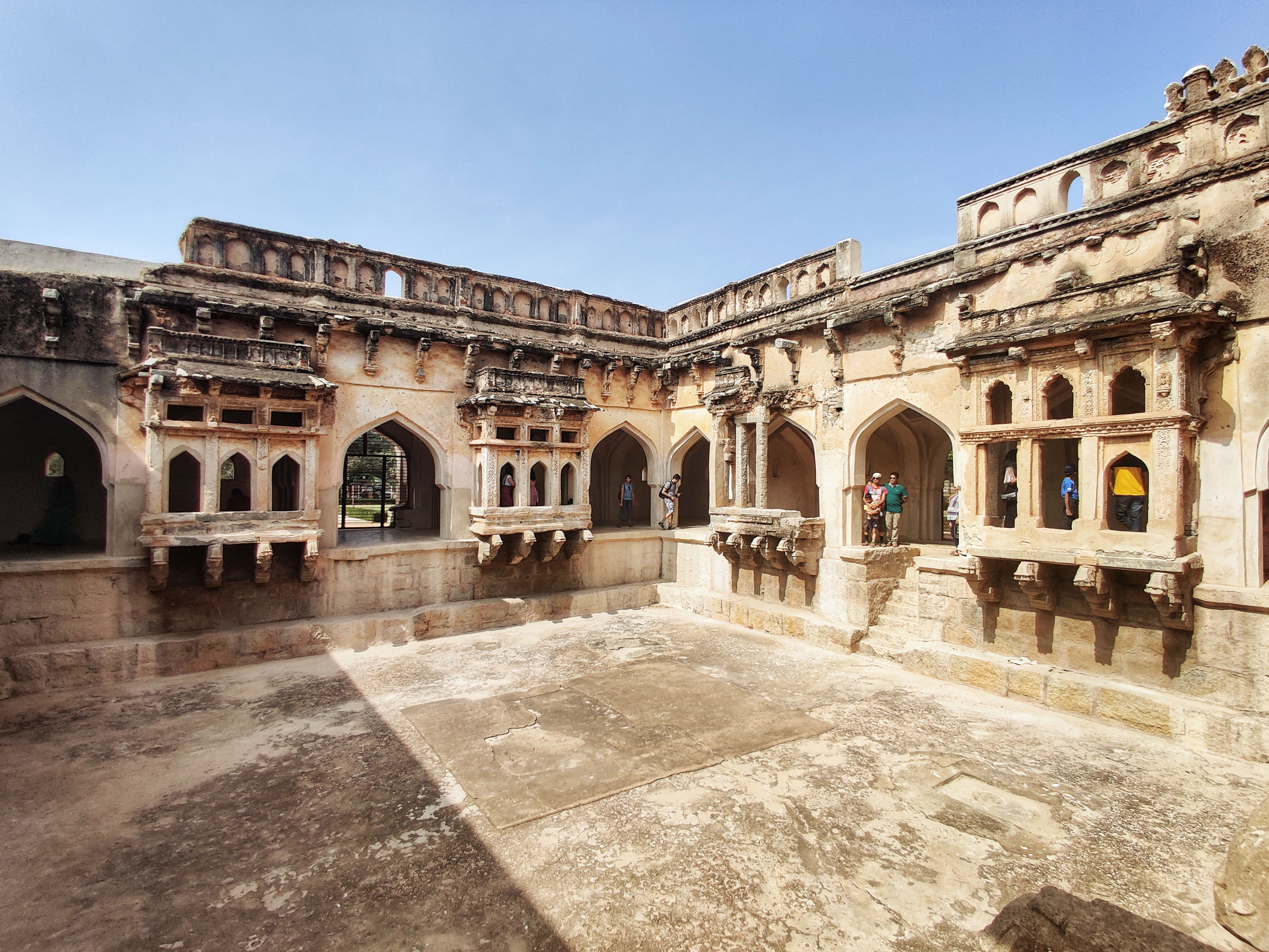 We know from history, that ancient rulers and powerful kings fancied horses and elephants. Hampi has this very unique structure with Islamic-style design and architecture that aroused our curiosity. Our well-informed guide told us that these dome-shaped chambers were used to park royal elephants. There are around 11 such chambers all interconnected, and it looks simply amazing. I was in awe of this structure and went all out to capture loads of photographs with many close ups that show these chambers clearly. 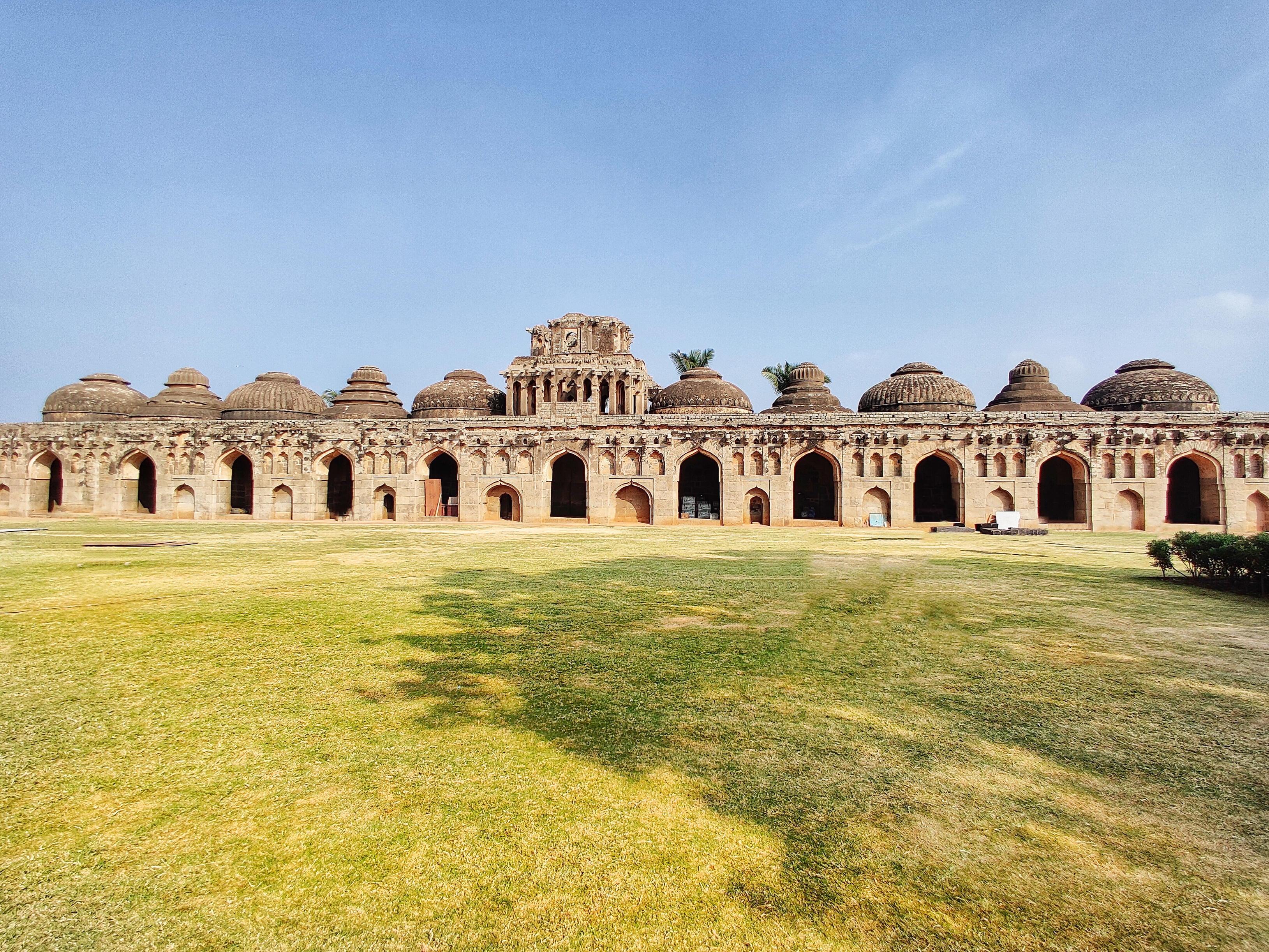 Out of many religious statues in Hampi, this Narasimha Temple has one of the most imposing sculptures. The specialty of this statue is that it was carved out of a single stone. It depicts Lord Narasimha sitting on a snake having seven heads in a yoga position. 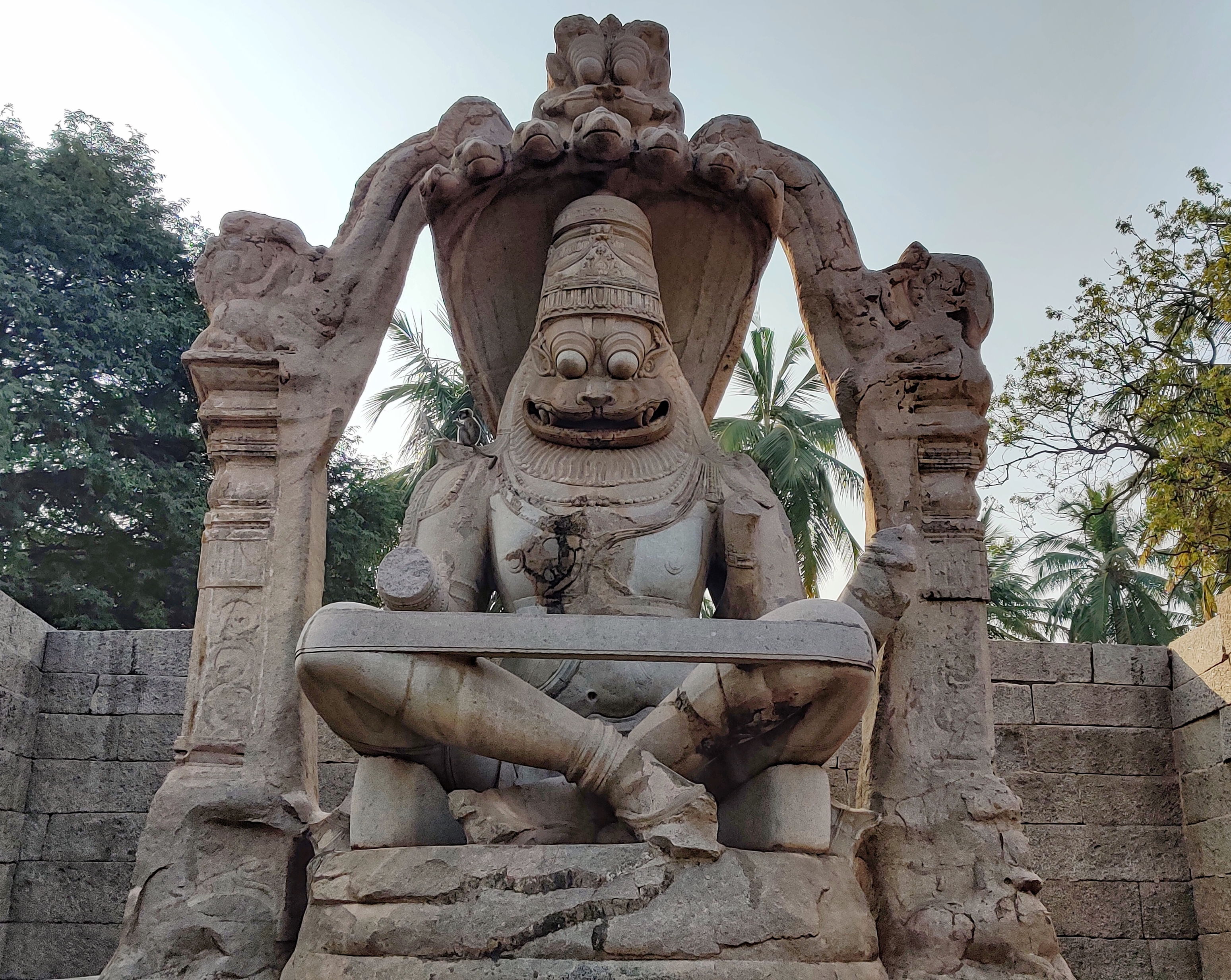 Everything in Hampi is all about intelligent design and extraordinary craftsmanship and Pushkarani is no exception. Each monument exhibits the ancient town planning and architectural style of the Vijayanagara era. These sacred tanks attached to temples were associated with rituals and functionalities of the temple. They served as a venue for their annual boating festivals during which, idols of both Gods and Goddesses are taken out on a coracle. While walking to Virupaksha temple one passes this sacred tank. 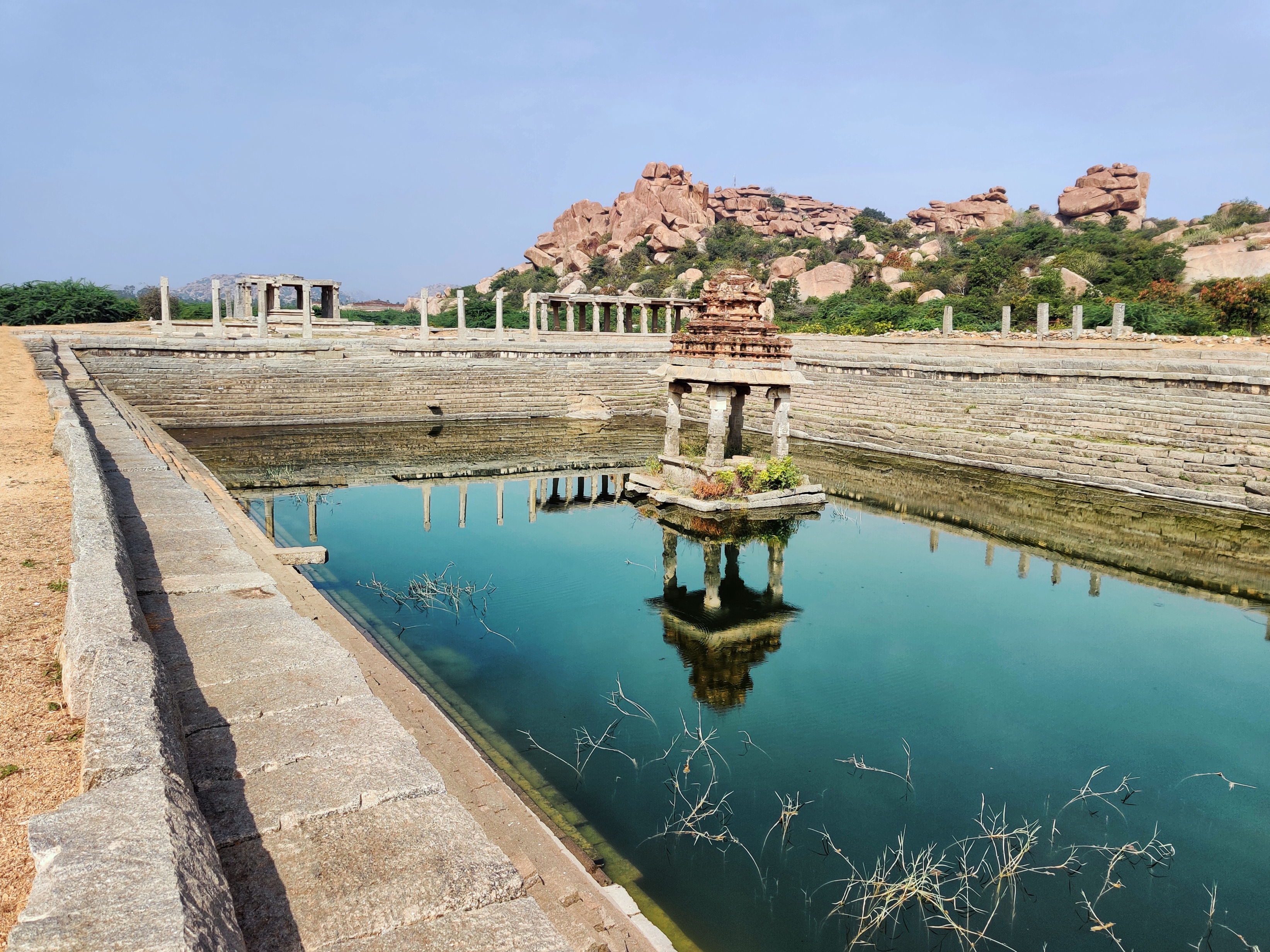 This stepped tank is amazing and its unique architecture is intriguing. The geometrical dimension on all four sides and the beauty of the design speaks volumes about the craftsmanship of those times. This is constructed from black stones. In Hampi, we see a lot of construction completely from stones. Our guide also showed us circular stone "Thalis" designed those days that were used for serving food to soldiers.

Each and every monument has a hidden story carved on its stones from king's swords to statues of dancing ladies. Mesmersied by the sculpture, I randomly captured photos while our guide was explaining the significance of various locations. 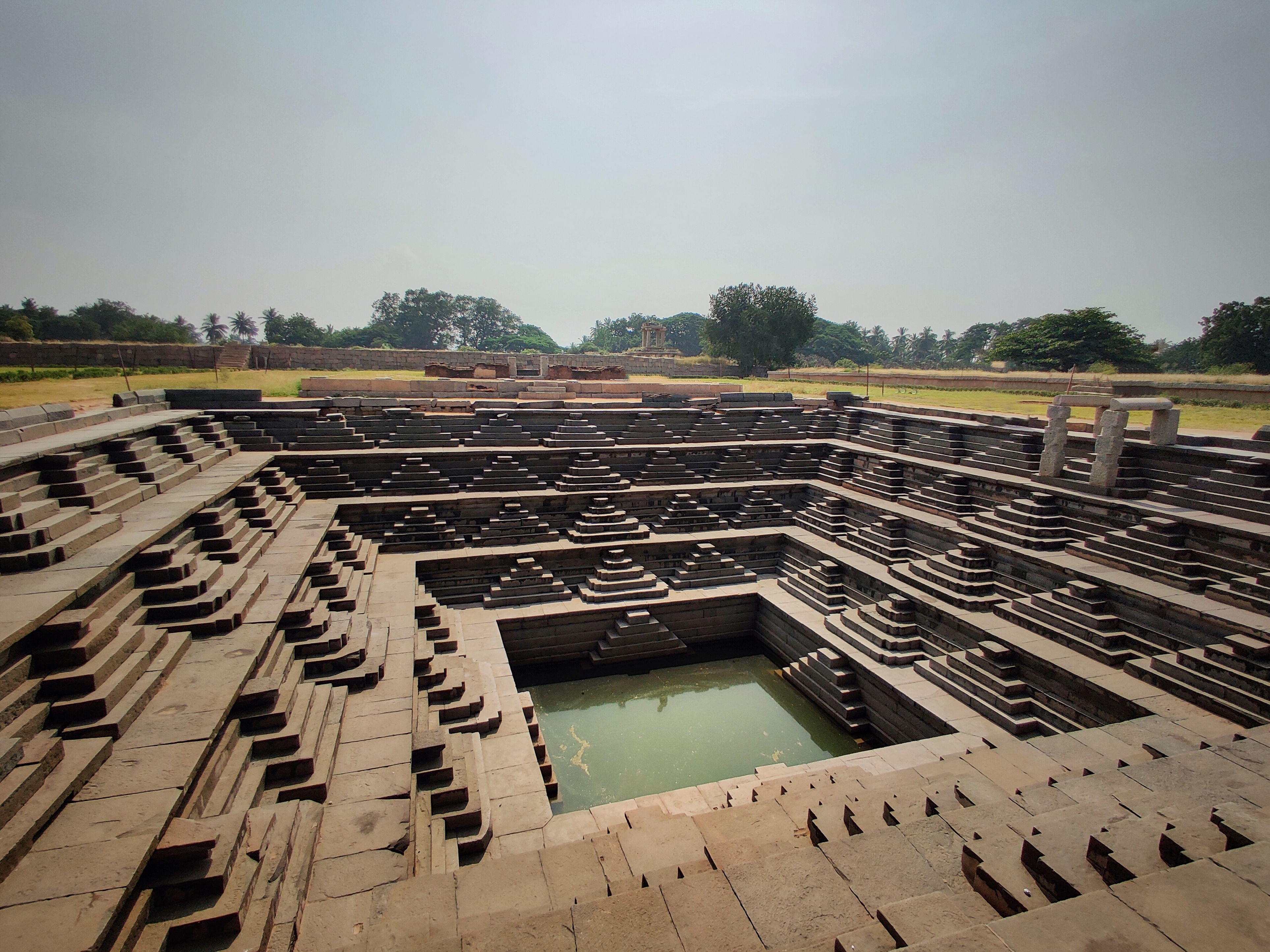 One of the landmarks of Hampi is this stupendous statue of Lord Ganesha, completely carved from black stone. This status is carved from a single massive stone. It is situated on the slopes of Hemakuta Hills, and this statue is about 5 meters in height. This is a vantage point from where one can have a spectacular view of Vijayanagara architecture and style of art. 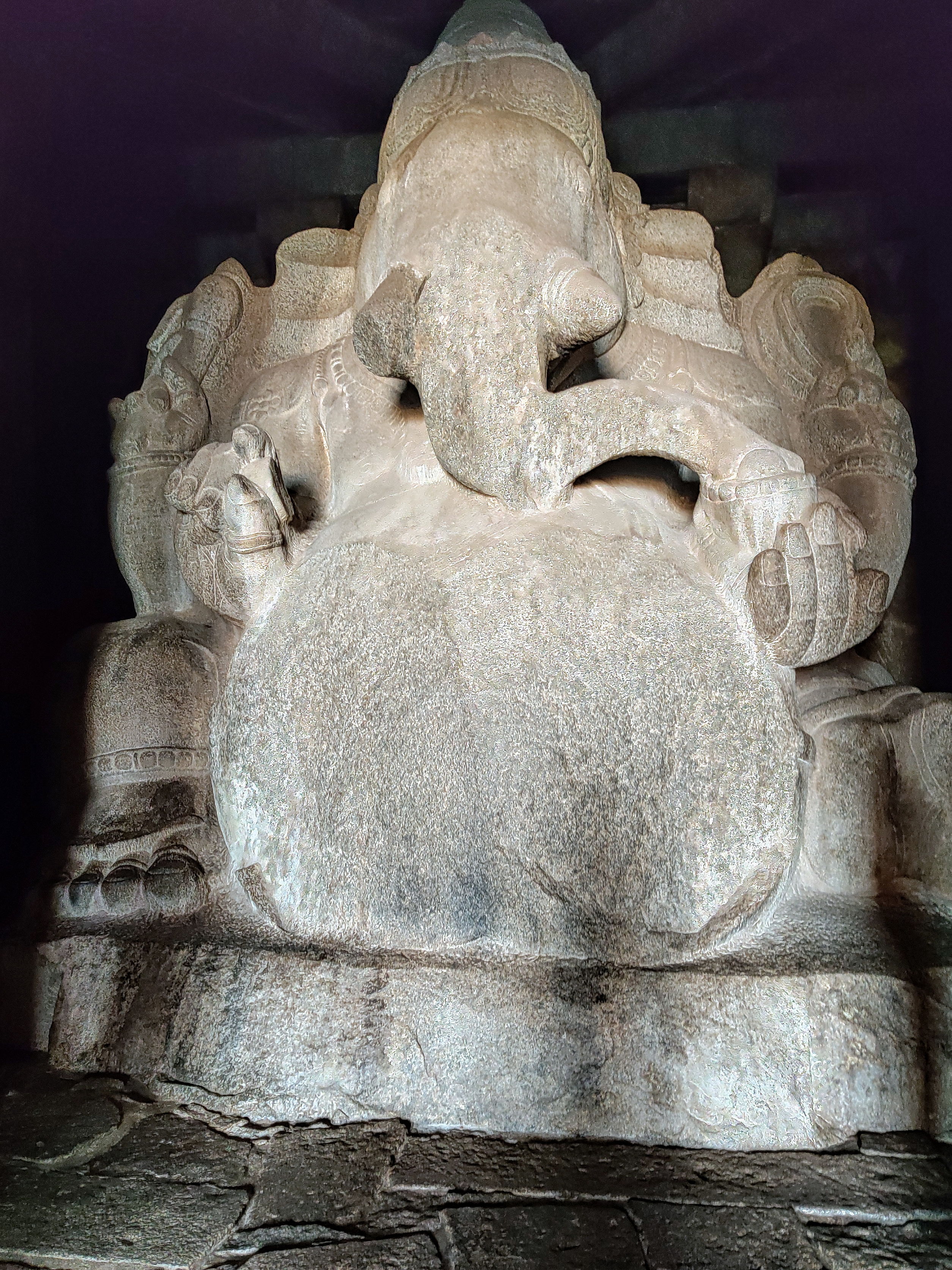 Towering statue of Lord Ganesha in the temple; another unique carving from a single stone

We spent three hectic but enriching days in Hampi. From trekking to the top of Matanga hills to view the sunset and visit Lord Hanuman's birthplace Temple, relaxing at Hippie Island, taking a coracle ride, to exploring the astounding architecture of Hampi, we had a unique experience. We covered more than 30 MUST VISIT sites and monuments in Hampi, all of which were built by Krishna Deva Raya greatest ruler of the Dynasty.

Finally, while we were leaving this amazing treasure trove of mindboggling architecture and history, there was a feeling that we might have missed something. Guess that is my excuse to visit this mesmerizing place again, soon. Hampi receives heavy rain during monsoon due to its proximity to Tungabhadra River. Oct through Feb is the ideal time to visit Hampi, with Dec being ideal. The weather at this time is warm and pleasant. March to May is peak summer hence to be avoided

Hampi is a cultural hub in South India with many festivals celebrated all year long. Vijaya Utsav is the most celebrated in Nov. It is a cultural extravaganza that is worth witnessing and. brings back the magic of royal heritage of 15th century

Hampi serves the best south Indian food. The traditional Northern Karnataka Thali meals are most popular in Hampi. One should NOT miss MANGO RESTAURANT that serves delicious thali and lassi. Delicious non-veg food is available in Hippie Island.

Hampi is a famous destination for solo travelers and is safe for tourists. Some travelers prefer to stay in Hospet. Being a religious site, certain decorum is maintained creating a safe environment. Anyway, being cautious is a basic rule to follow.

Being a unique heritage site, Hampi is not on every traveler’s radar. You will come across travelers who are truly interested in the history and culture of this ancient town.

Plan your trip in advance since Hampi is a small town. Also, renting a car or motorbike for local travel is best to cover more ground. DO NOT VISIT WITHOUT GUIDE. Respect local people, their customs and dress appropriately.