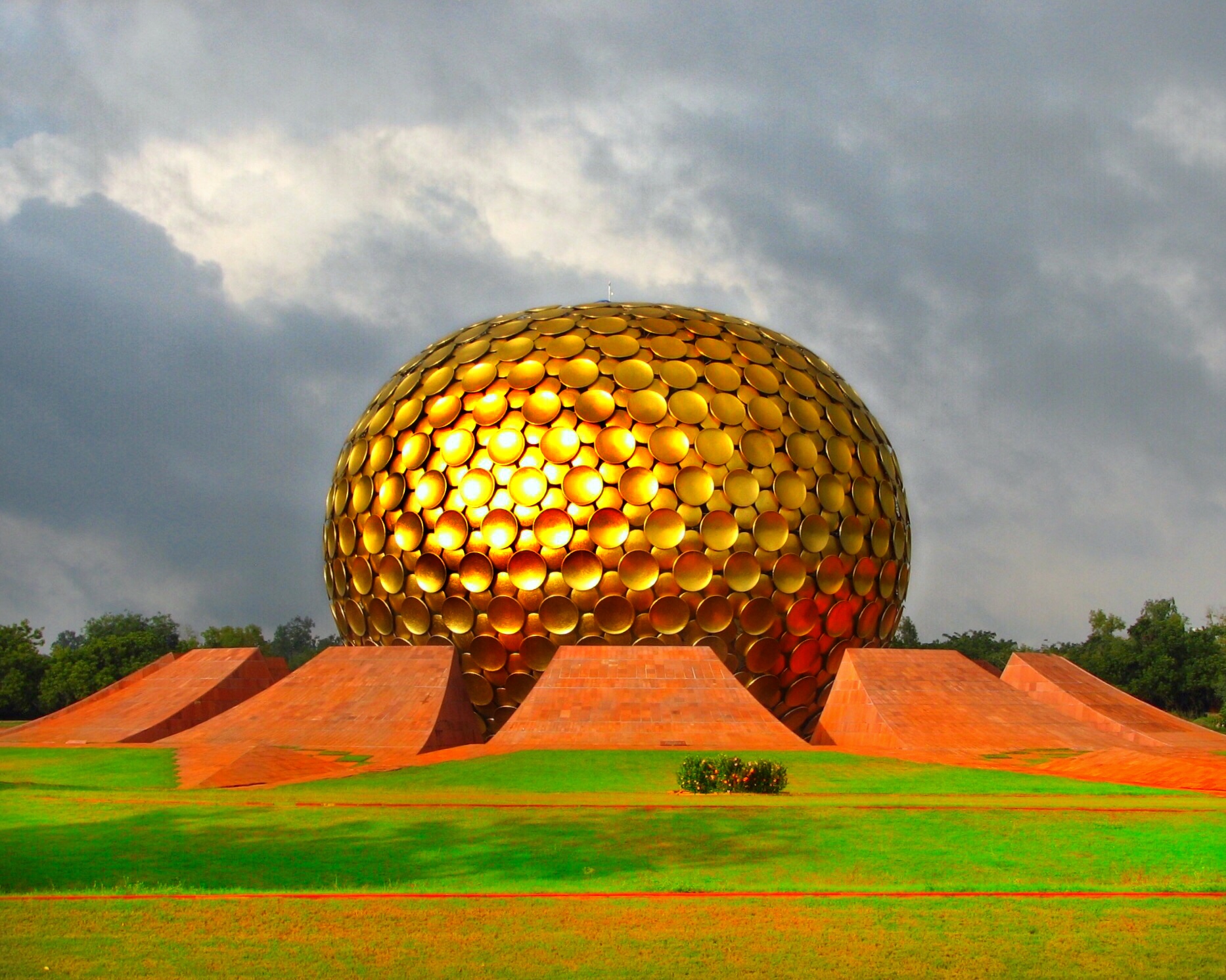 The French Riviera of the East

It was a bright, sunny, winter afternoon nearing Christmas and we entered a cobblestoned street with a riot of colors all around. The aromas of coffee and freshly baked croissants lured us into the next-door Café with quirky graffiti and colonial interiors. It was buzzing with tourists, mostly foreigners in summer wear, engrossed in reading a book or enjoying coffee in a surprisingly serene ambience. I whispered to my friend wondering if we were really in India during the peak of the holiday season…Of course, we were in Pondy!

Pondicherry, a charming city on the Coromandel Coast was the chief French settlement in India for almost two centuries. During the Anglo-French wars between 1742-1763 and French Revolution in 1793, it changed hands frequently before British returned it to French as part of the Treaty of Paris in 1763 and again in 1814. Although British gained complete control over India in 1850s, they allowed the French to retain permanent control over their settlements of Pondicherry and other pockets like Mahe, Yanam, Karaikal and Chandernagor. British ceded control of India in 1947 but it was not until November 01, 1954 that the French handed Pondicherry and other settlements over to Independent India. Since then it has become a Union Territory including the pockets of Mahe, Yanam and Karaikal and not a separate state.

Pondicherry, nicknamed as Pondy, has a special vibe that is a blend of spiritual aura, colonial heritage and cosmopolitan flair. No specific monument influences its ambience, but with natural surroundings of sea and sand dunes, Pondy itself is a Heritage. The White Town area also known as French Quarter greets you with mellow hues of cream, yellow, pink and grey outer walls interspersed by flamboyant old Bougainvillea-draped French-style houses, churches and restaurants. The grid-style town planning is laid with parallel streets cutting across each other at right angles. The tree lined boulevards have French names beginning with rue (translates to street in French). A stroll around the French Quarter just after sunrise takes you back in time, making it almost a daily morning ritual. 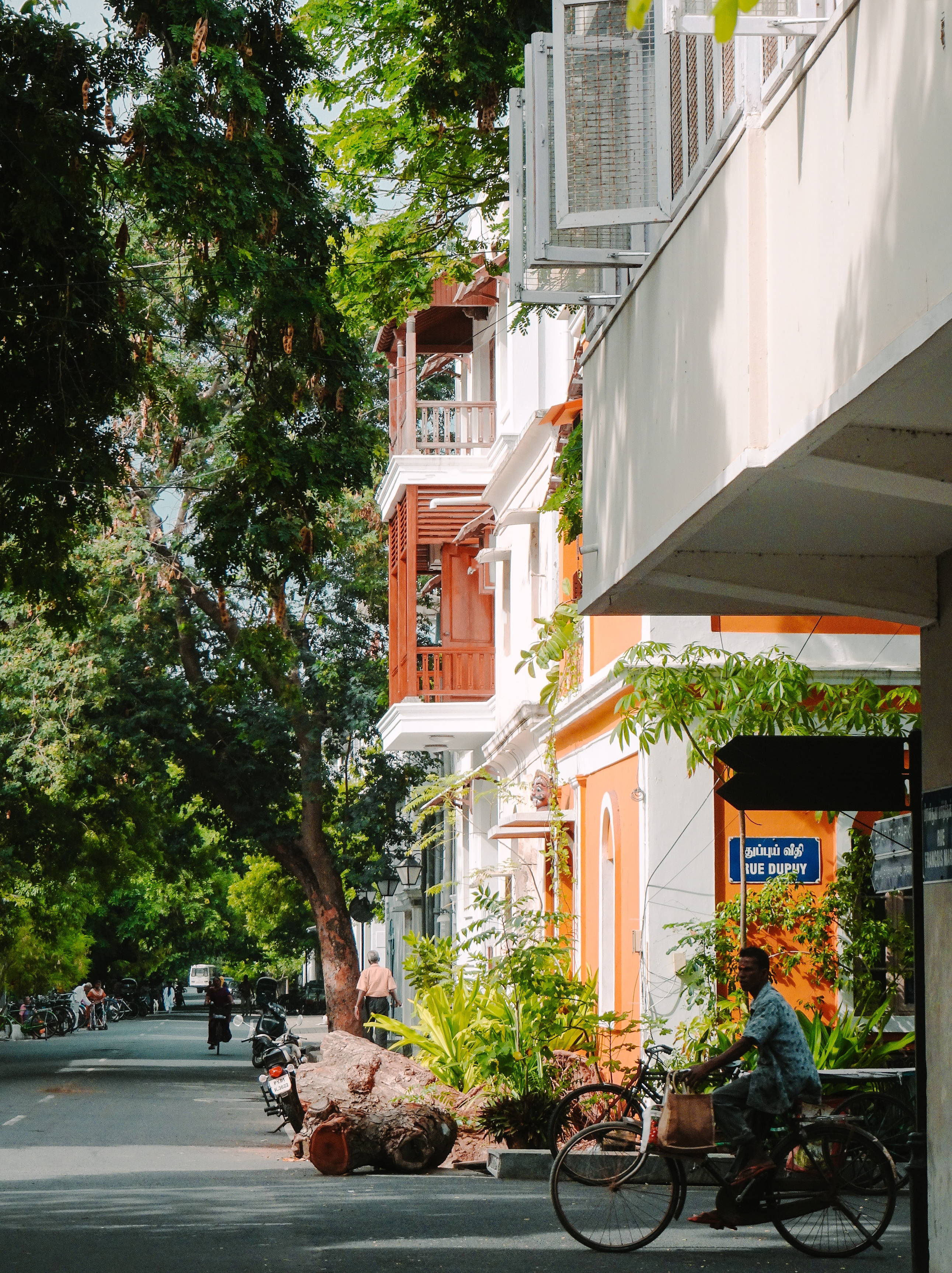 During one of my many trips to Pondy, we decided to drive down to Cuddalore from Bangalore, keep that as our base and explore French settlements in the surroundings. Cuddalore is just 20 kilometers south of Pondy and 100 kilometers north of Karaikal. It is a small fishing town on Coromandel Coast and was once a major seaport during the British colonial era. Even today many streets have retained their British names. It is an offbeat location with a virgin beach and comfortable pocket-friendly accommodation options especially when Pondy is buzzing with tourists during peak seasons and the cost skyrockets for everything. With just a half-hour hop, one can reach French Quarter in Pondicherry, spend the entire day exploring Pondy and retreat away from the maddening crowd. While in Cuddalore, a must visit is the second longest beach on Coromandel Coast, Silver Beach. It is a virgin beach away from the busy city and off the tourist radar. This is where British built Fort St. David, one of the three important forts built by the empire. The tsunami of 2004 destroyed the fort heavily damaging Silver Beach with a death toll of 2,700. 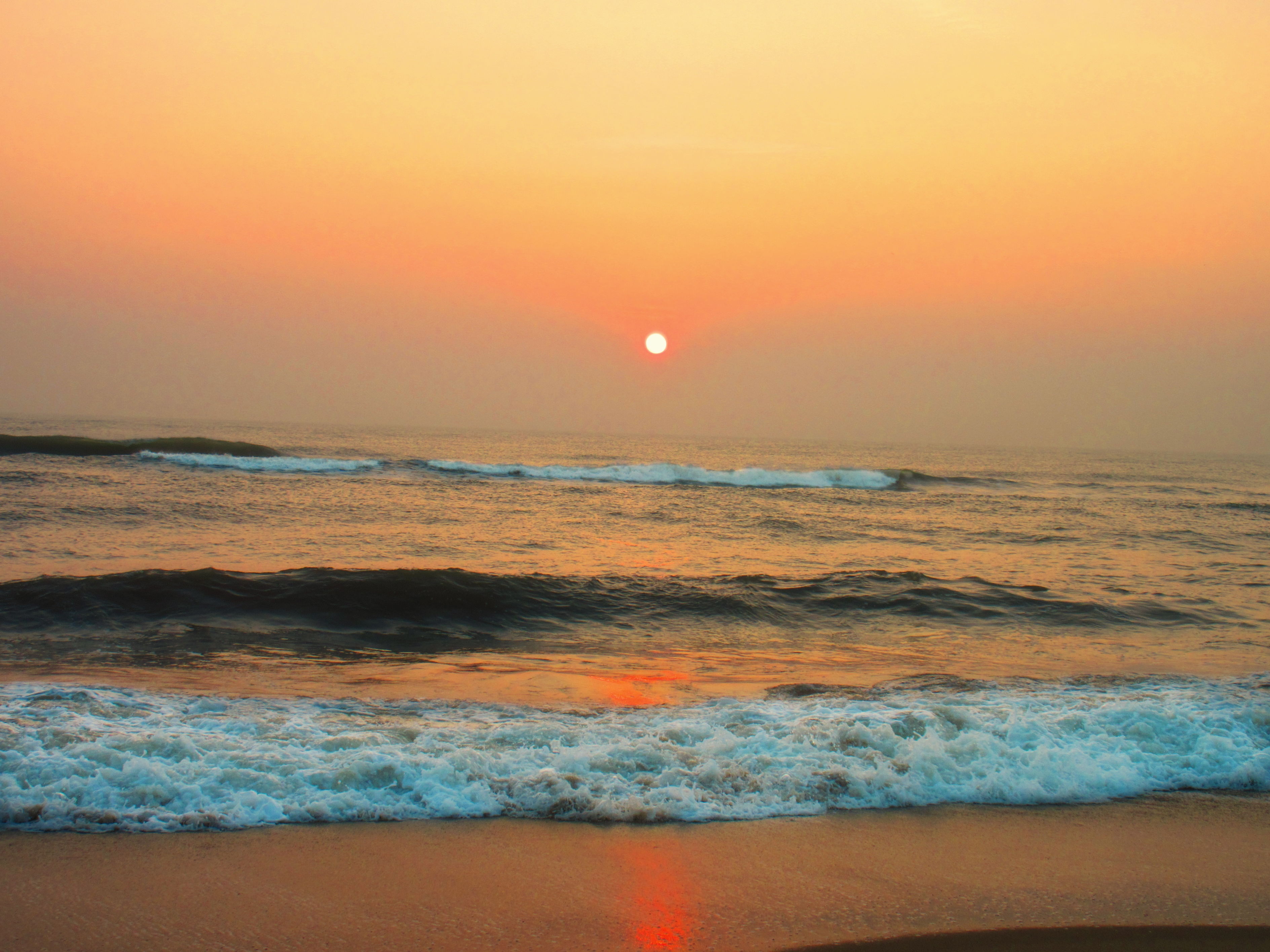 Silver Beach is an offbeat location even though not far away from Pondicherry. It is also one of the longest beaches in Asia with 57-kilometer long stretch.

On our way to Karaikal and 40 kilometers south of Cuddalore is the village of Pichavaram located between Vellar and Coleroon estuaries that form the Killai backwater. It is home to number of islands covered with one of the largest Mangrove forests in India. A personalized rowboat ride navigating through thick forests and narrow canals among the picturesque James Bond movie scene is a unique experience. It is advisable to reach early to beat the queue and experience flora and fauna in the silence of nature. Owing to lack of many rowboats, service is on first-come-first-serve basis. Tipping the rower can extend the duration of your ride taking you deeper inside. It is a paradise for nature lovers. 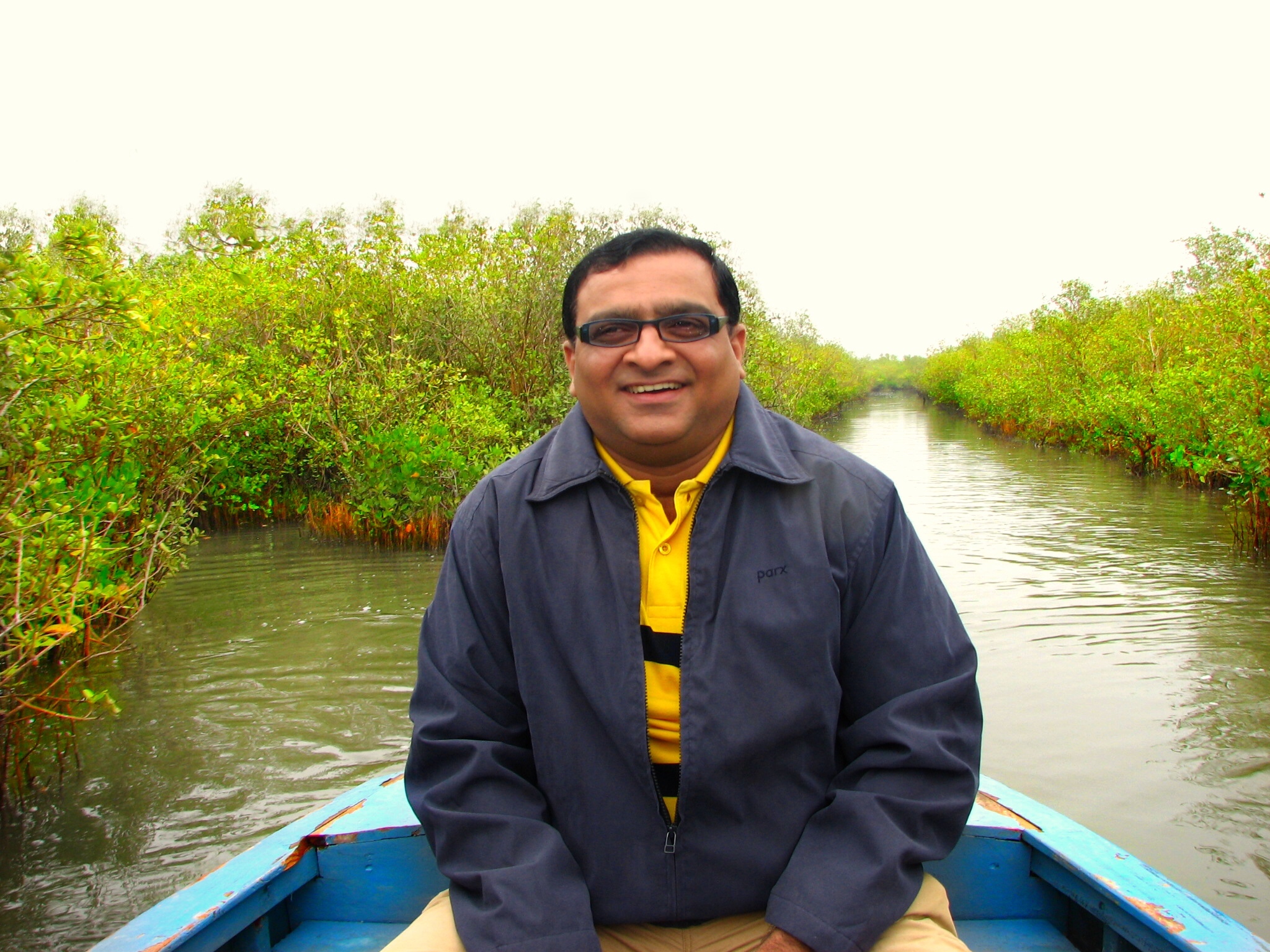 Pichavaram mangrove forest covers 1,100 hectares area and is separated from the Bay of Bengal by just a sand bar. Early morning rowboat ride inside the narrow canals is a treat for nature lovers.

Karaikal located 130 kilometers south of Pondicherry was one of the pockets of French settlements that was merged with Republic India in 1954. The port town of Karaikal today is one of the districts of Union Territory of Pondicherry even though it does not share a land border with Pondy. The population is a blend of Hindus, Muslims and Christians, hence boasts of beautifully architected religious places. Karaikal Ammaiyar Temple has an interesting ancient history associated with it. Sandy beaches and fishing hamlets of Karaikal are offbeat destinations and are a cut above the ones in Pondy. Thousands of families originally from Karaikal are now living in France and the frequent visits of NRIs (Non Resident Indians) is the reason for the high cost of living. 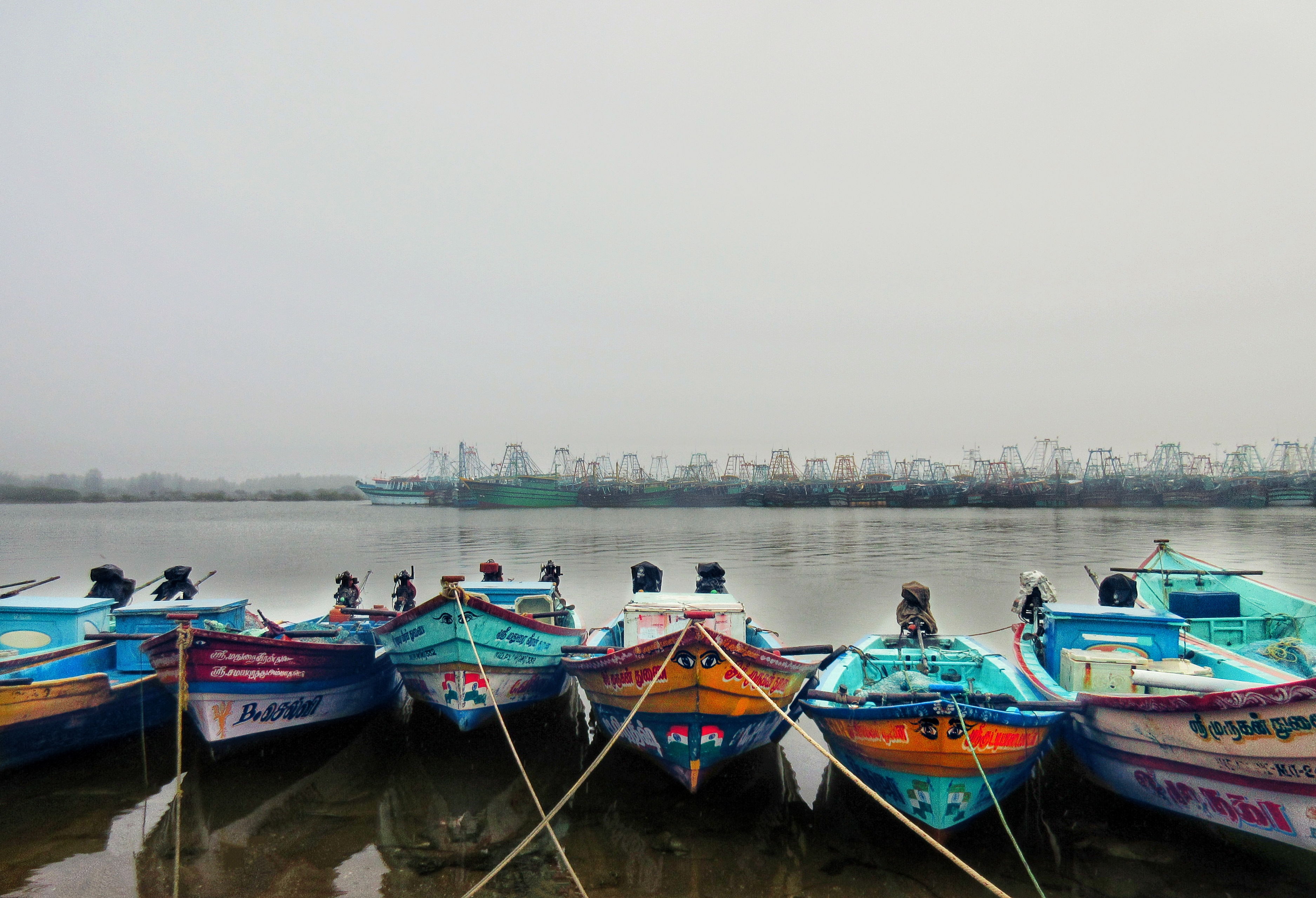 The World Bank funded the project of modernization of Karaikal fishing harbor.

While exploring the French Quarter, one cannot miss rue Dumas that runs parallel to the Beach Road (Goubert Ave). This was the first street built by French in 1706 when Pondy was a tiny fishing village. It ends at a large park known as Government Square which houses the Governor of Puducherry at Raj Nivas. A stroll along the Beach road or sitting on the benches of the sidewalk enjoying the brilliant vista of the beach is the ideal way to spend your evening. Overlooking the sea are century-old, high-walled mansions with arched windows and louvered shutters. Some of them have been converted into government administrative offices with one of them being the Consulate General of France. 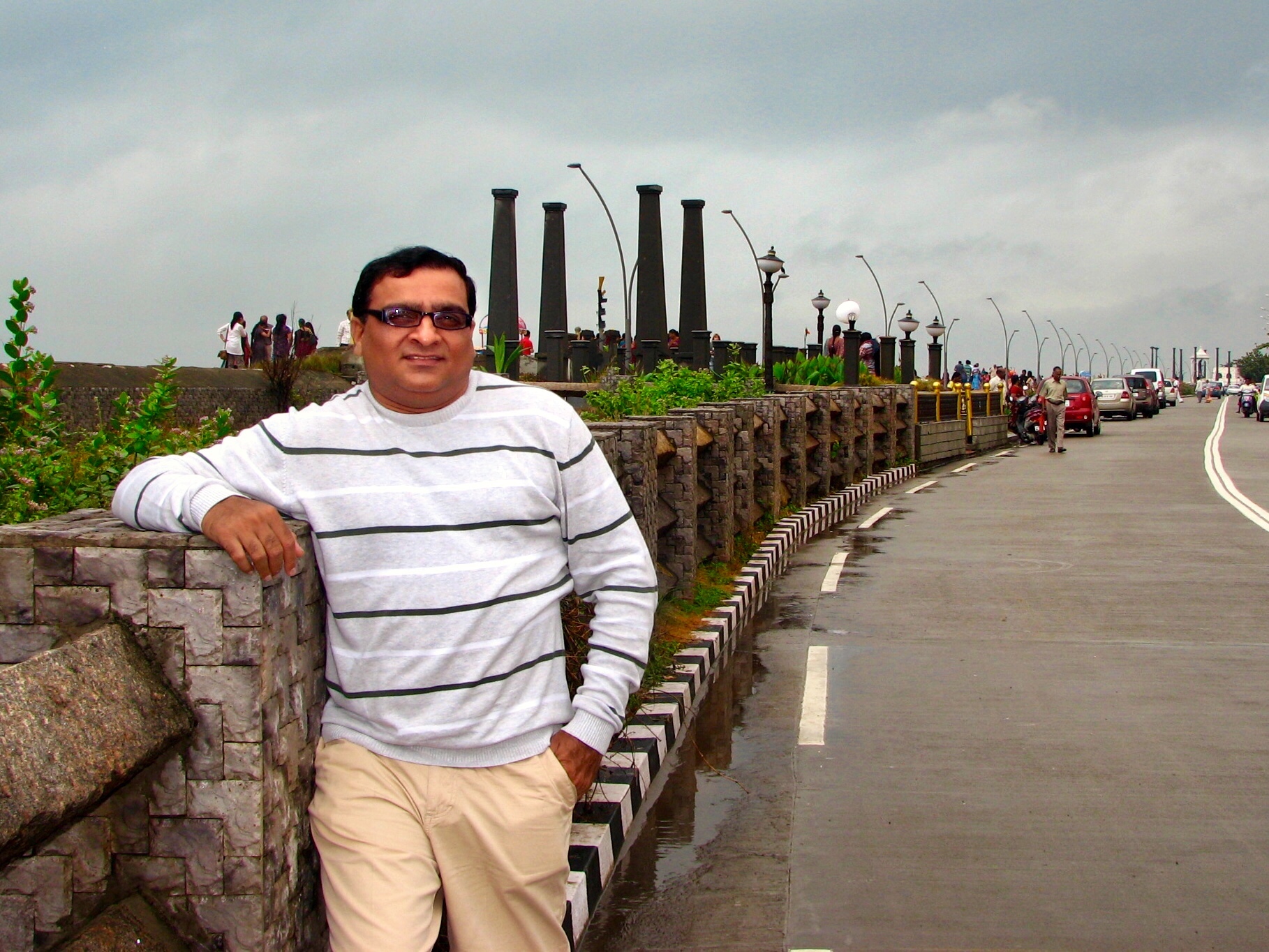 Street view of Goubert Avenue with the Kargil War Memorial facing the seashore in the backdrop.

The churches of Pondicherry represent the confluence of history, antiquity and modernity. A trip to Pondy is incomplete without visiting these architectural beauties. One of them is The Church of Our Lady of Angels (EGLISE DE NOTRE DAME DES ANGES). The church made up of brickwork with lime mortar and sand, built by Louis Guerre in 1851 with Greco-Roman architecture, lies at the intersection of rue Dumas and rue Surcoof. It stands out because of twin square bell-towers with round arched windows and the polygonal dome which diffuses a glow of blue, yellow, and red light from its glass windows. This is the only church in Pondy where mass is celebrated every Sunday in French, Tamil and English. 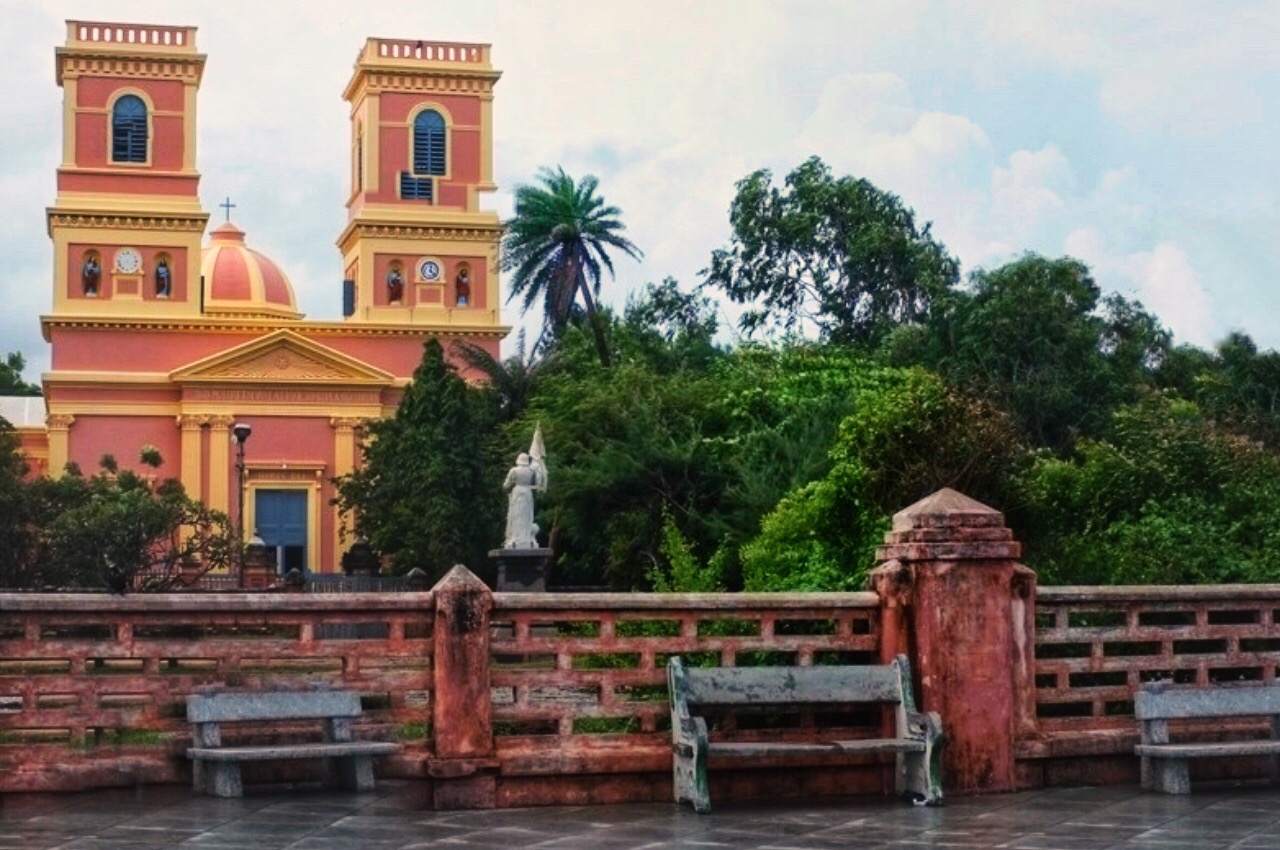 Looking over the Bay of Bengal and facing the rising sun, The Church of Our Lady of Angels has a statue of Joan of Arc, armored and carrying a battle standard.

At the intersection of South Boulevard and Mahatma Gandhi Road lies another heritage church built in 1908, The Sacred Heart Basilica. The Government of India issued a commemorative postal stamp in 2008 to mark the centenary celebration of this church. This church is illuminated inside and out with chandeliers and neon lights. The glass pictures of 28 saints devoted to Sacred Heart of Jesus located inside the church are stunning masterpieces. The statues of the four evangelists with lampposts beneath it describe inviting Jesus and the twelve apostles. We were fortunate to witness Christmas celebration here. The entire Basilica decorated with lights was worth capturing on camera. 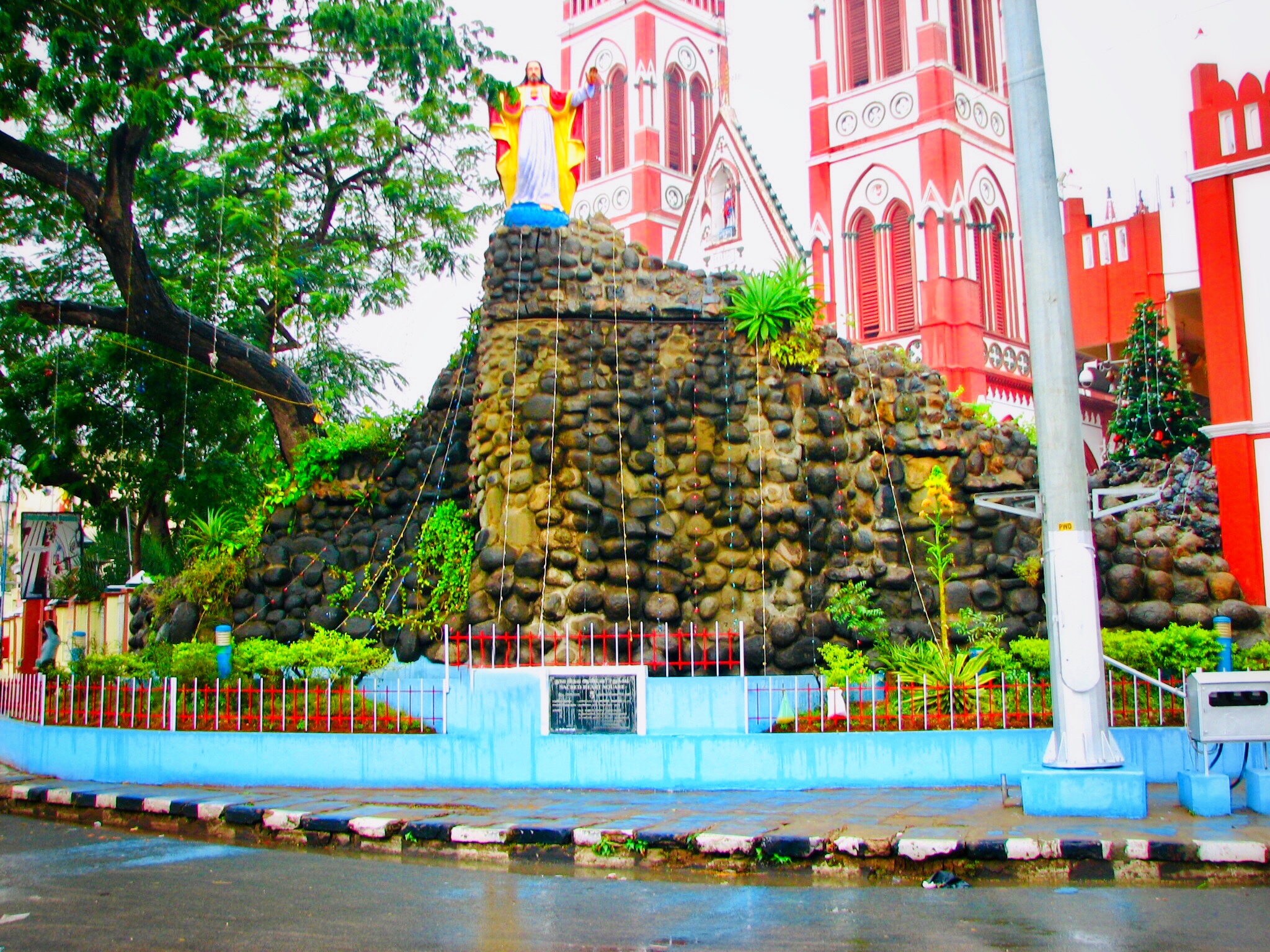 The Grotto of The Sacred Heart Basilica stands out from the main road. The Gothic style architecture of this 100-year old church is spread across 50 meters in length and 48 meters in width with 18 meters in height.

There are several beaches like Auroville, Paradise, Reppo which attract bucket loads of tourists. My favorite is Promenade beach, which is also the happening beach in Pondy. It is a long beach along Goubert Avenue and entry to vehicles is barred late in the evening, making it the ideal time to hang around and enjoy the vibe. Many seaside eateries and food hawkers offering local street food adds to the charm of the beach. The waterscape, ocean spray, smells & sounds, and diverse crowd make for an enriching experience. 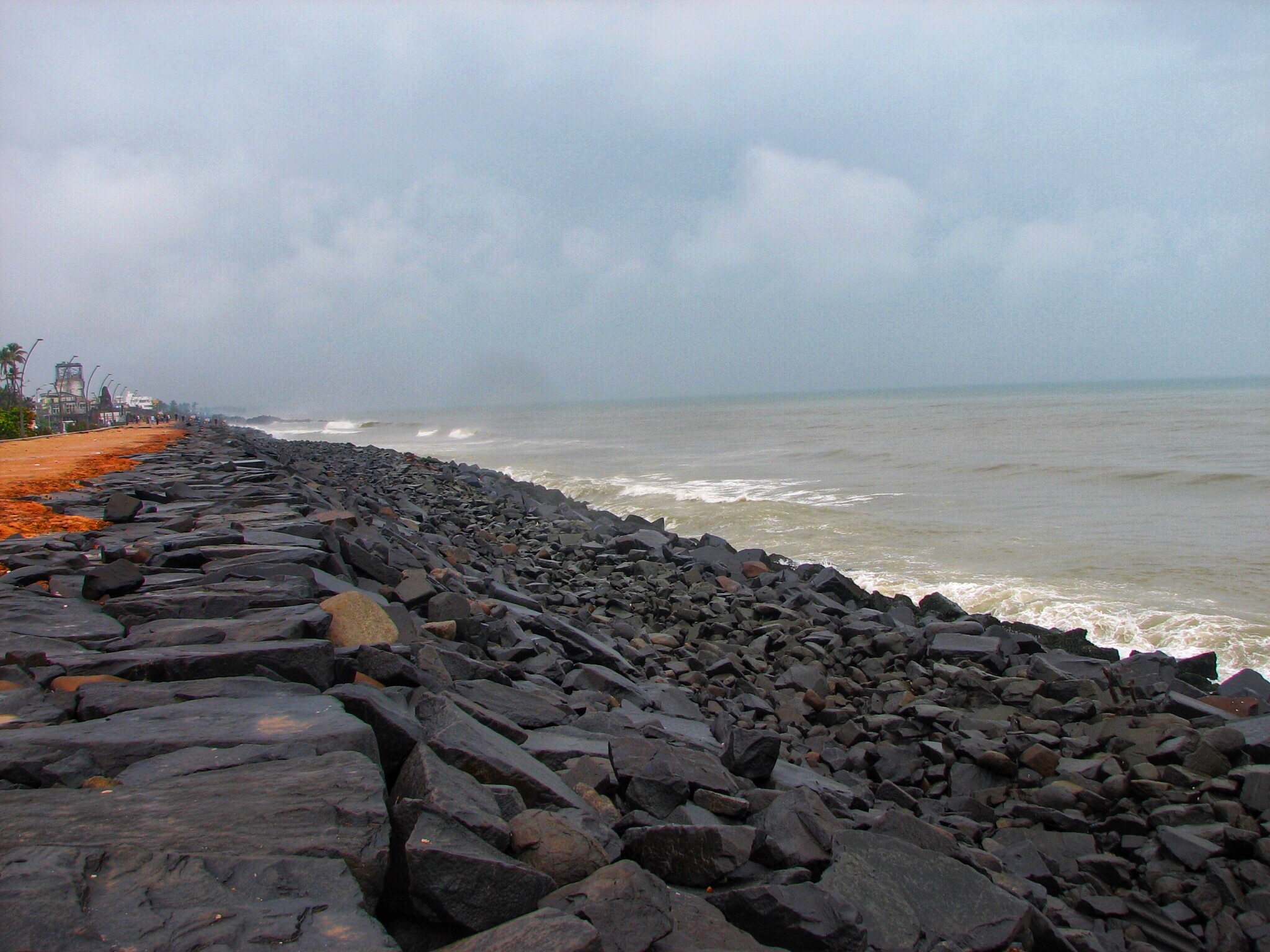 If you are an early riser, do not miss the mesmerizing beauty of sunrise in these serene surroundings with minimal tourists. Staying in one of the hotels across the beach road allows for this experience from the luxury of the balcony of your room with a steaming cup of coffee. The beach also boasts of heritage landmarks including Joan of Arcs statue, heritage building of town hall, old lighthouse, Mahatma Gandhis memorial, old customs house and old pier built by French. This is where French boats used to dock and goods were transported over the rail network built on the pillars. 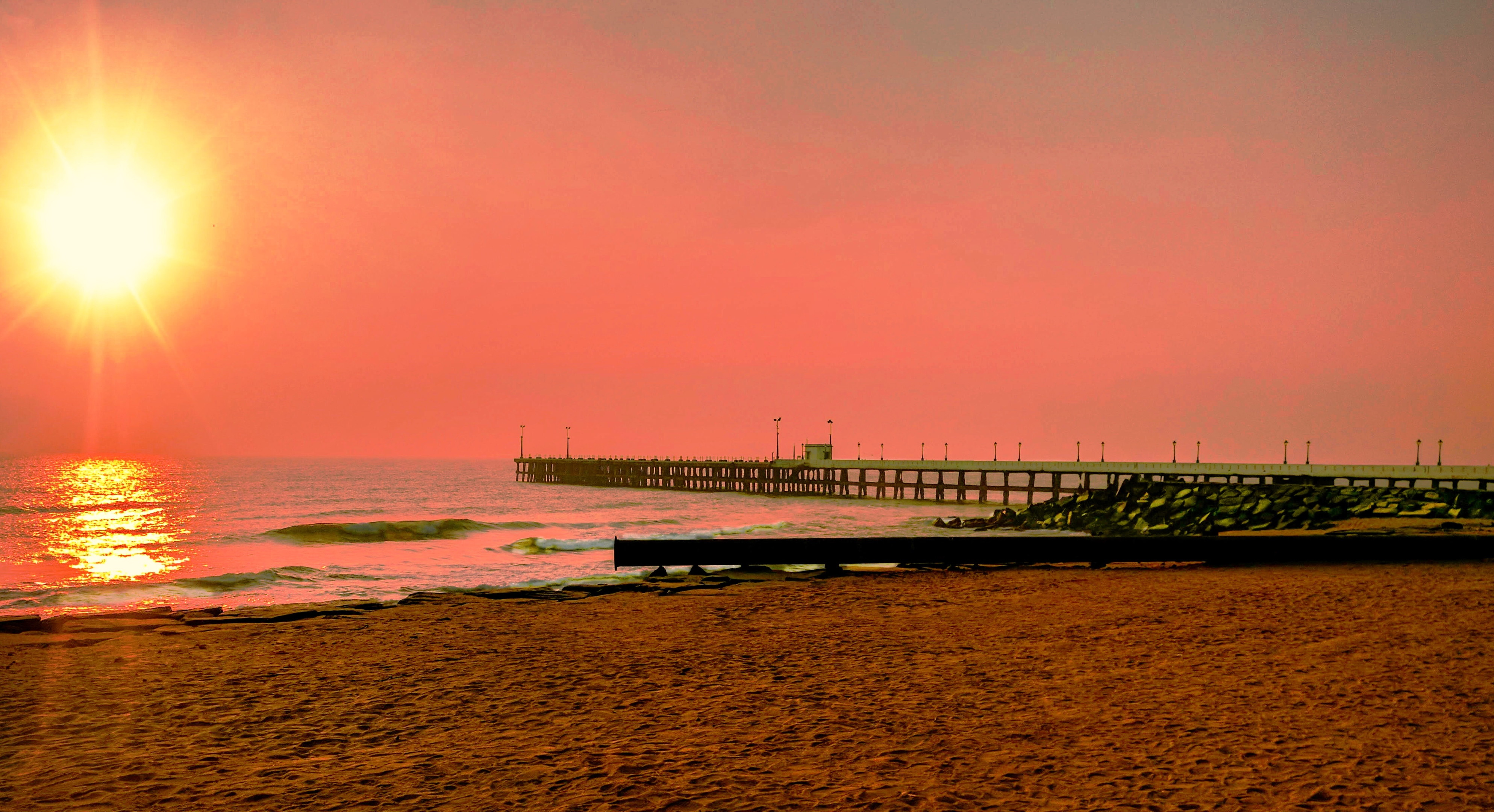 Sunrise at Promenade with the view of old pier and customs house that were destroyed by a cyclone in 1953, just a year before Pondicherry was transferred back to India.

The Samadhi of Sri Aurobindo Ghosh, the great Indian philosopher and yogi is in the heart of the town. You can pay a visit there and understand the culture and philosophy of the foundation. Photography is prohibited inside the ashram. However, you can visit Auroville township about 10 kilometers north of Pondy, which was founded in 1968 by Mira Alfassa (The Mother) and designed by French architect Roger Anger. It was built in a 20-square kilometer area on barren wasteland. In the center of the town is Matrimandir, a symbol of the Divine's answer to man's aspiration for perfection". It took 37 years to build the huge sphere surrounded by 12 petals. The Geodesic dome is covered by golden discs that reflect sunlight with a surrounding garden, known as Peace Area. The entry to the place is free but if you want to visit the meditation hall inside the dome then you need to make an advance booking. The township has a total capacity to house 50,000 residents and currently has about 3,000 residents from more than 50 countries who engage in spiritual practices and community service. It is a beautiful place to visit. 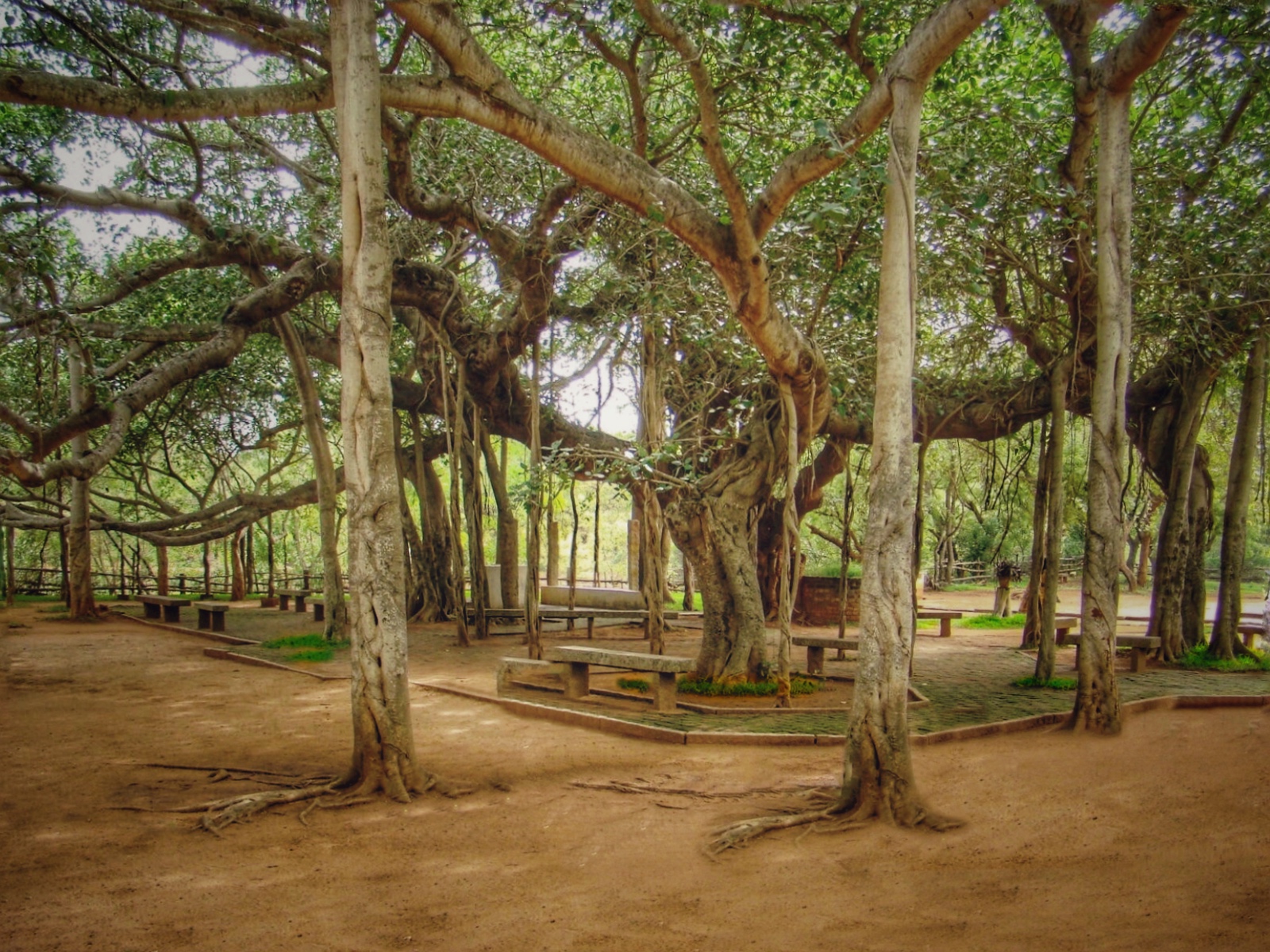 100 years old Banyan tree with its aerial roots at Matrimandir. It was a lone tree in totally barren landscape during the construction of the township.

This was a holiday well spent with a peek into the French settlements of India. We had a long drive back home to Bangalore, not the one suggested by Google maps. The shorter route connecting Krishnagiri has been in horrible shape for decades so we had to drive through Vellore. 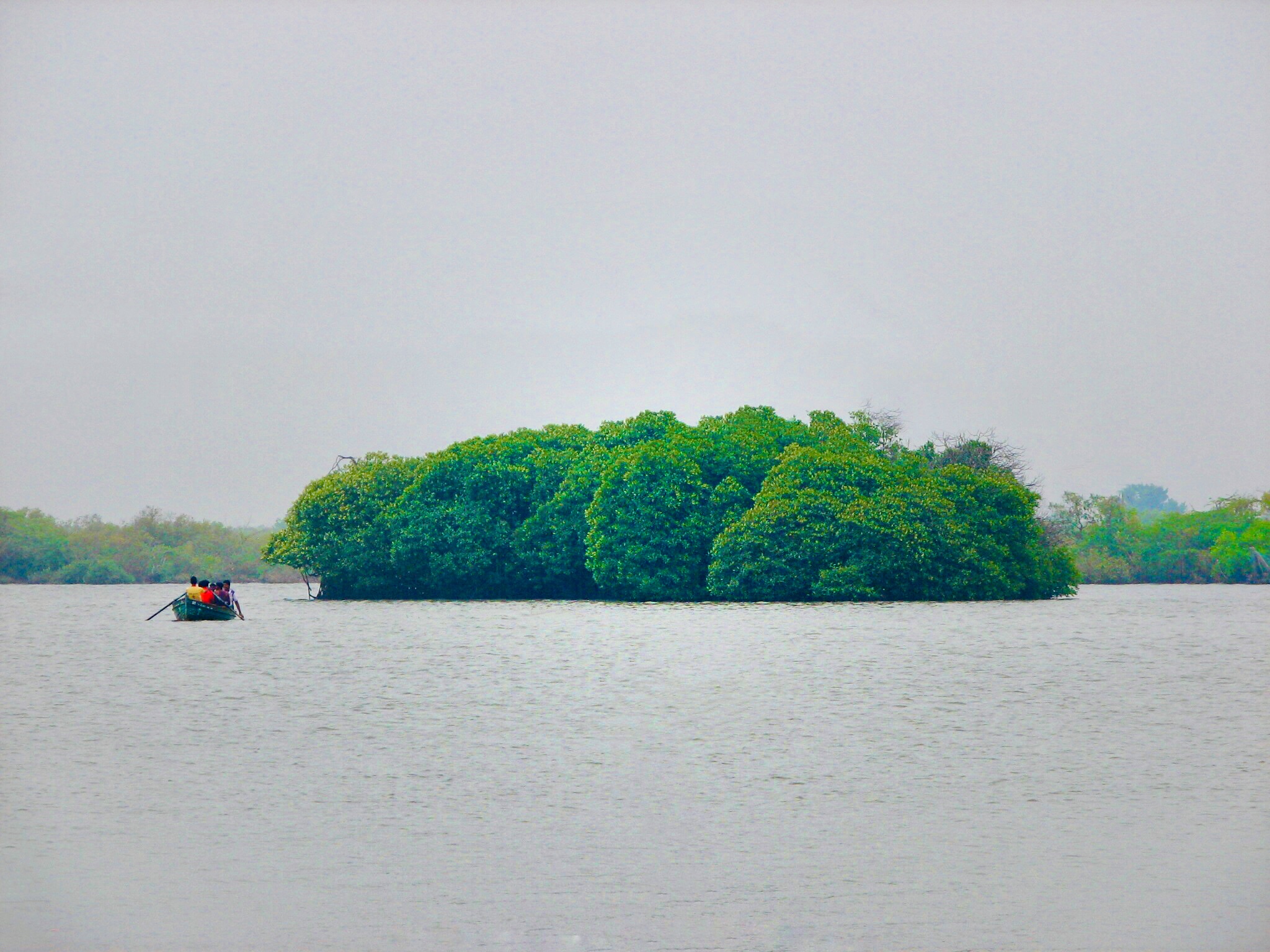 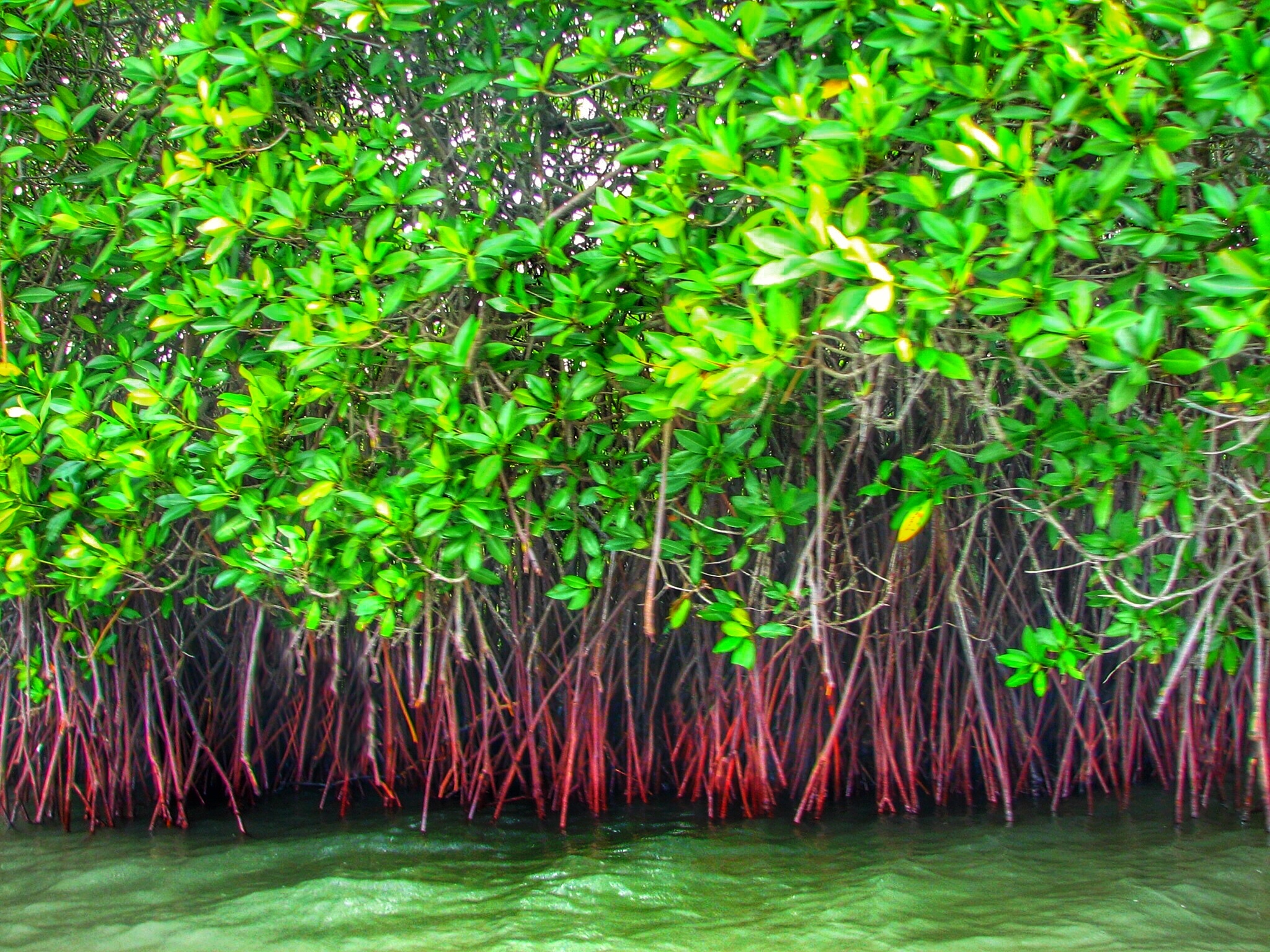 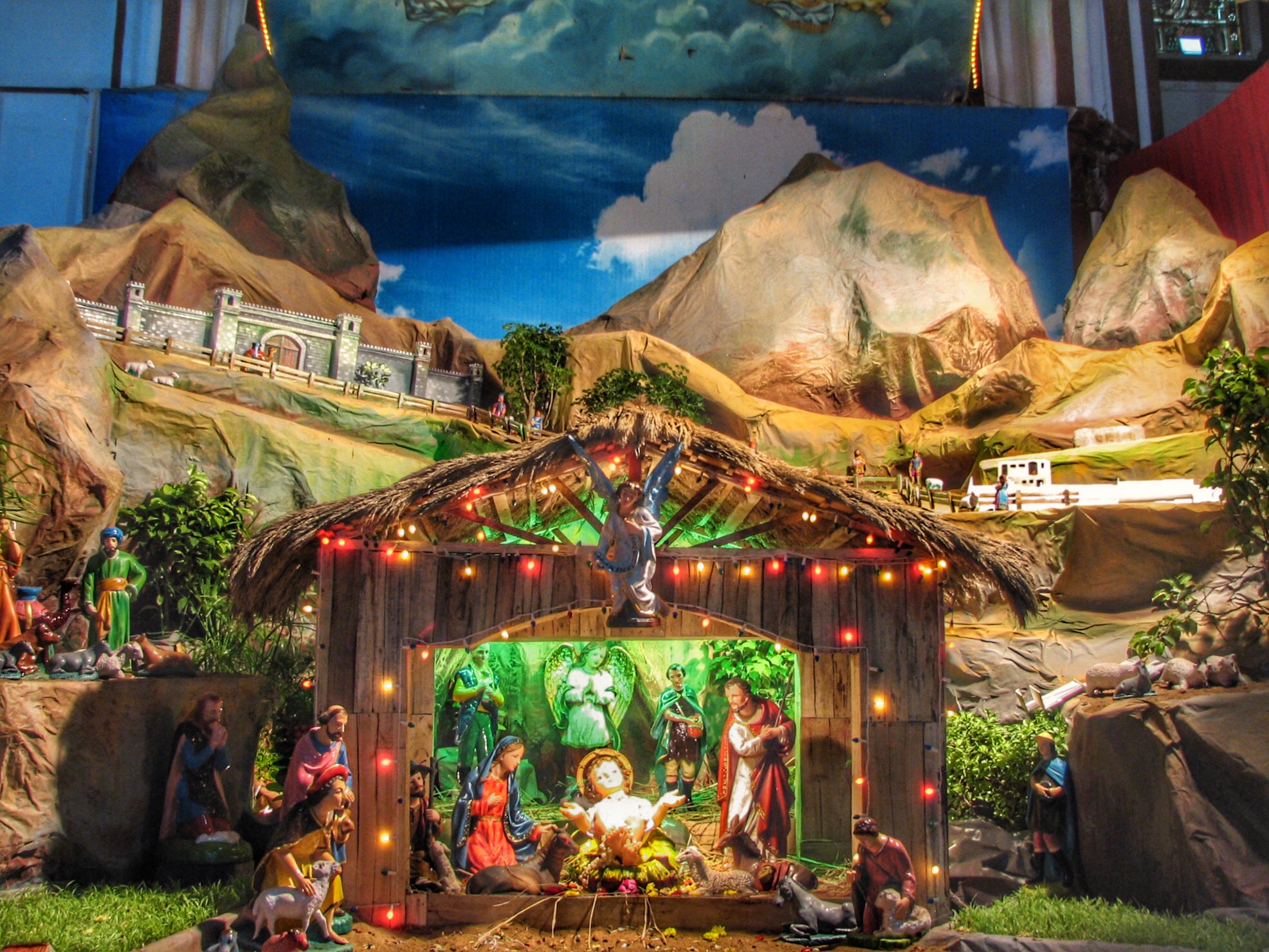 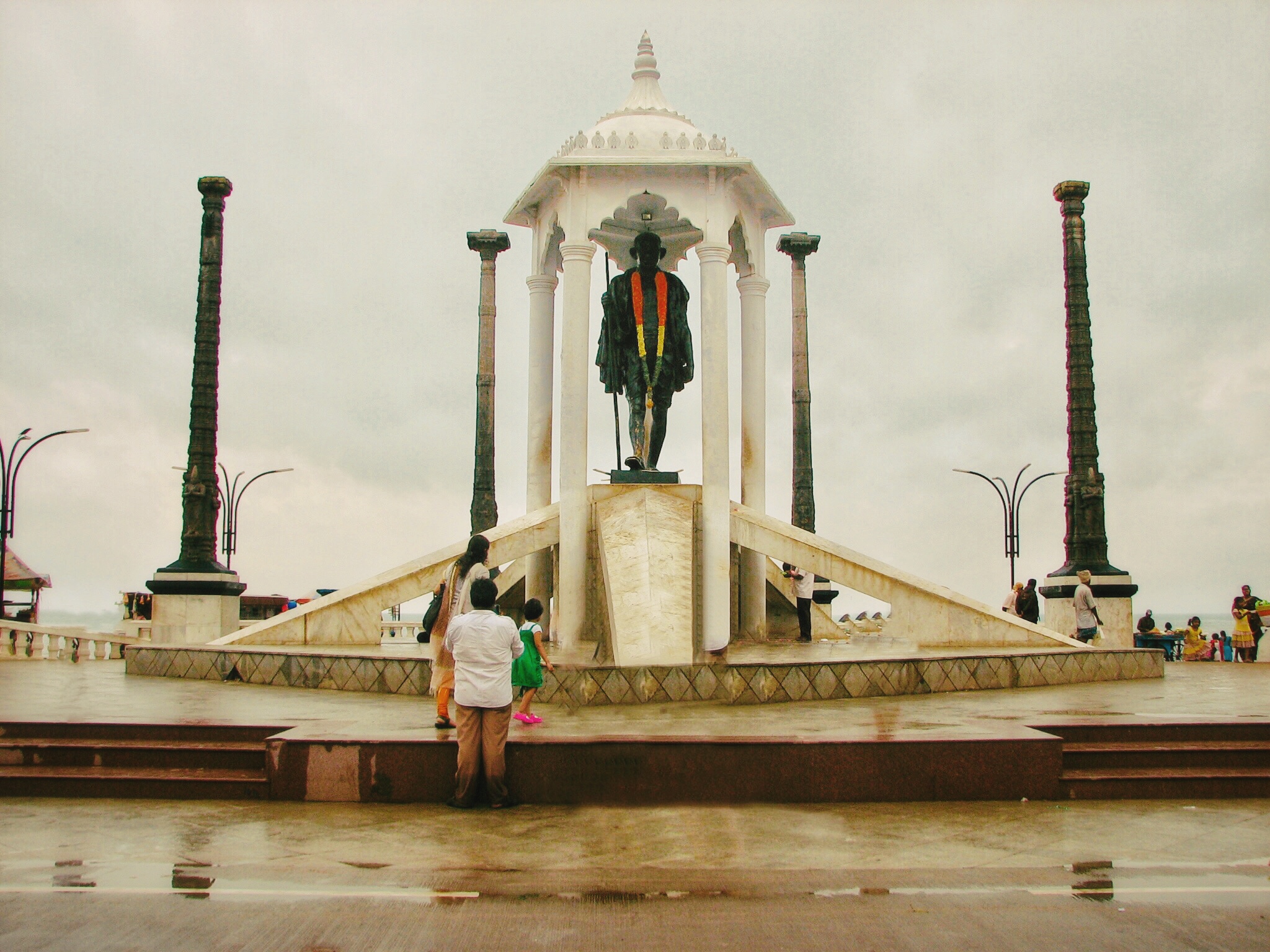 Winter months from October to February is the ideal time to visit. Avoid summer months as it is too hot and humid to handle.

A small union territory within India, Pondicherry was under French rule when British ruled the entire country. This contributes to the beautiful French architecture that dominates this place, a haven for architecture lovers.

Being a popular destination on the international travel trail, Pondicherry caters to a variety of cuisines. However, south Indian cuisine still dominates with flair of Chettinad flavor.

This is a very safe place as its economy relies mainly on tourists.

This small place is very much on the tourist radar and you will find tourists everywhere. However, there are pristine beaches off tourist radar down south of Pondicherry.

Pondicherry has a tropical climate with warm weather all year round. Start your day early and avoid venturing out in the afternoon.