It is always fun when traveling to a vivacious and colorful island. Our family trip to Hawaii so far was full of fun. The vibe of these islands is contagious and travelers soon blend in with the vibrancy of the place. The happy-go-lucky attitude of the locals and their warm hospitality make the Hawaiian Islands one of the most visited places by travelers from the world over. While Hawaii has something to offer all travelers, a family vacation in Hawaii is something else. With numerous lookouts, beaches, botanical gardens, zoo, and historical places, Hawaii’s most popular islands make for a perfect family trip.

After an exceptional start to our family vacation in Hawaii, we were in anticipation of the rest of our vacation. We had planned our itinerary with many exciting places for the next few days. We indulged in plenty of fresh fruit juices, shaved ice and ice creams in exotic and rare flavors which the kids thoroughly enjoyed. We knew there was much more fun and enjoyment awaiting us.

We began day 3 with Diamond Head Hike, one of the iconic landmarks of Hawaii known for its military history, beautiful hiking trails, and spectacular coastal view of Diamond Head beach. Locally known as "Le'ahi", this place is believed to be a volcanic crater that was formed about 300,000 years ago. The trail is a paved pathway to the top, less than a kilometer and offers a glimpse of the geological and military history of this crater. The trail has steps and a tunnel to pass through which was thrilling for all of us. It is a comfortable trek that kids can easily do. 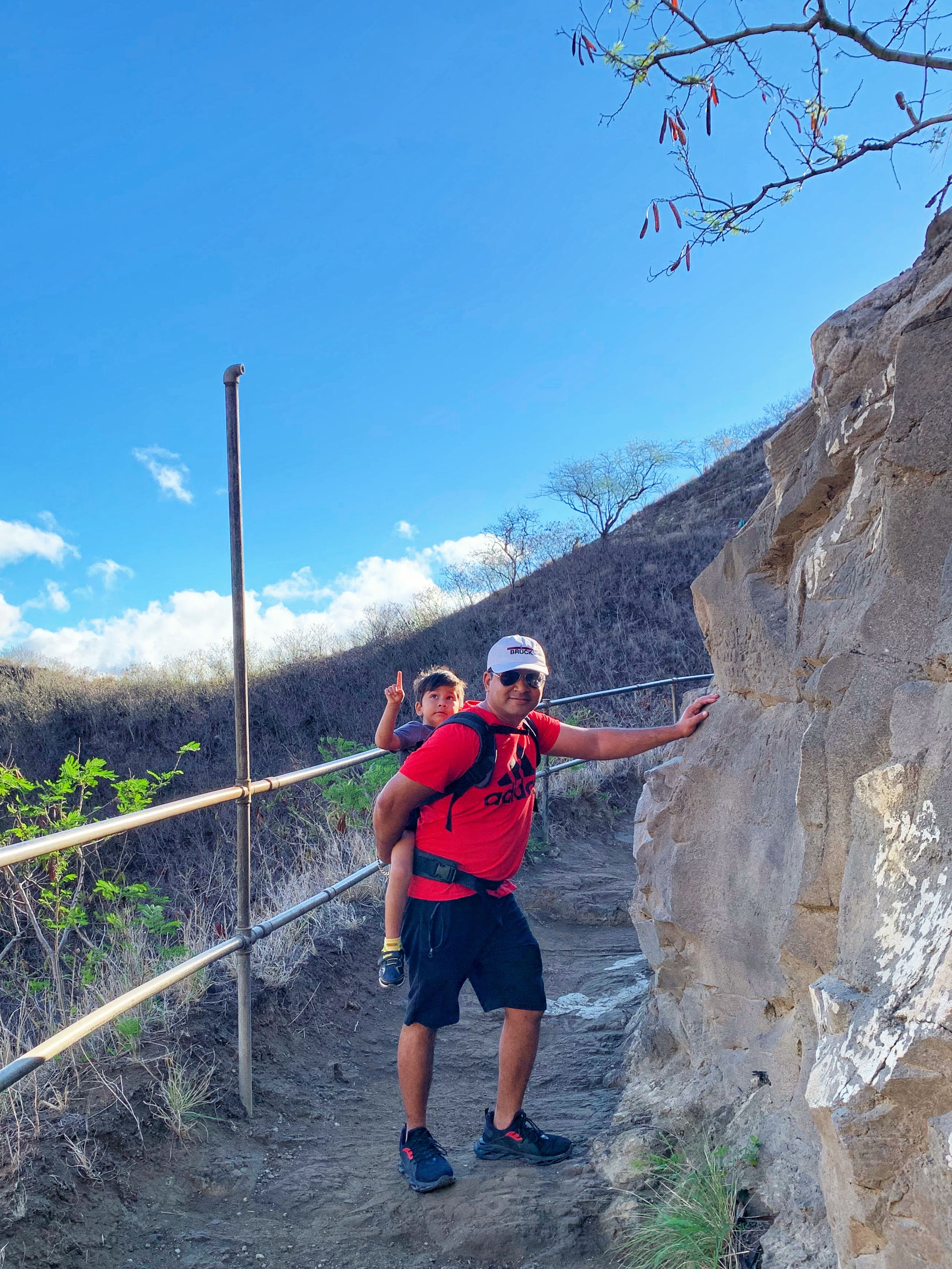 A little walking, a little carrying! That was my little one's mantra to do the Diamond Head Hike, fun either way!

Reaching the top is definitely rewarding! The view of the shoreline and Diamond Head beach from Koko Head to Wai'anae, Waikiki hotels, and mountains is indescribable. It makes for a picture-perfect sight. The trek took us 2.5 hours both ways with some time at the top. There were several fruit stands where we stopped and splurged on fresh fruit and juices. We had heard that it is tradition to visit Leonard's Bakery after a hike to Diamond Head. A 2-mile drive from Diamond Head, this is a famed Portuguese bakery started in 1952, that is known for its local delicacy called Malasadas. Trust me, it is worth all the time spent in line to sink your teeth into these delicious heavenly Malasadas. 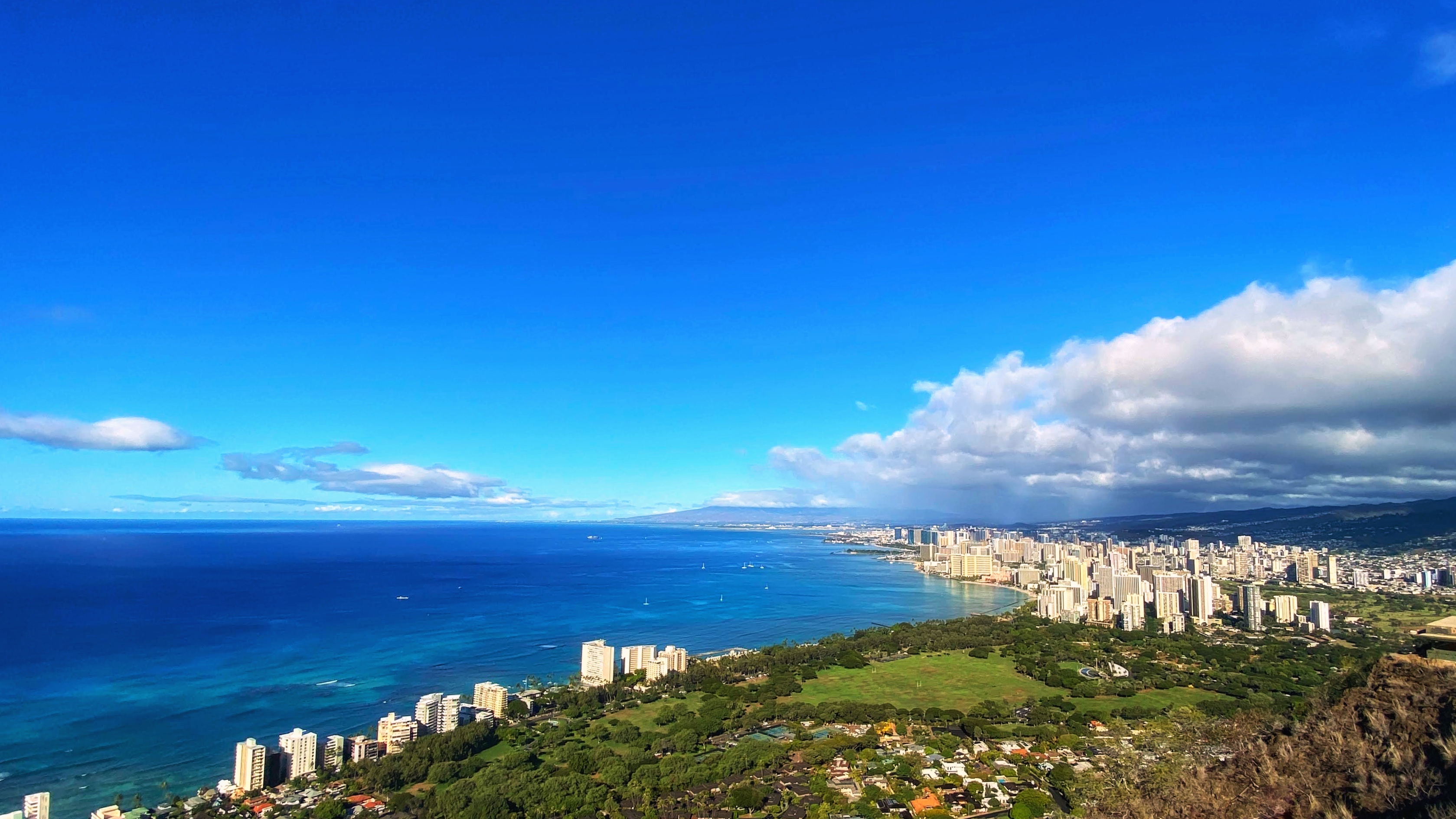 This is a spectacular panoramic view from atop Diamond Head, the site of luakini heiau (Hawaiian sacred place)

After indulging in Malasadas, we headed to Nuuanu Pali Lookout. The drive up Pali Highway takes us through dense forests with lush vegetation. There is also Nuuanu Pali Lookout hike for those who seek adventure rather than driving up. Slowly, the city disappears and the natural landscape of Hawaii emerges before us. The Nuuanu Pali Lookout has immense historical significance as it is the site of the Battele of Nuuanu. Here, in 1795, King Kamehameha I won the struggle and united Oahu under his rule. This lookout is known for its gusty howling winds. We felt the strong winds pushing us and heard the whistle of the winds through a small tunnel surrounded by mountains. It is one of Oahu's best scenic spots with a breathtaking view of Oahu's windward coast. This is the reason Oahu is the best Hawaii island for family vacation. 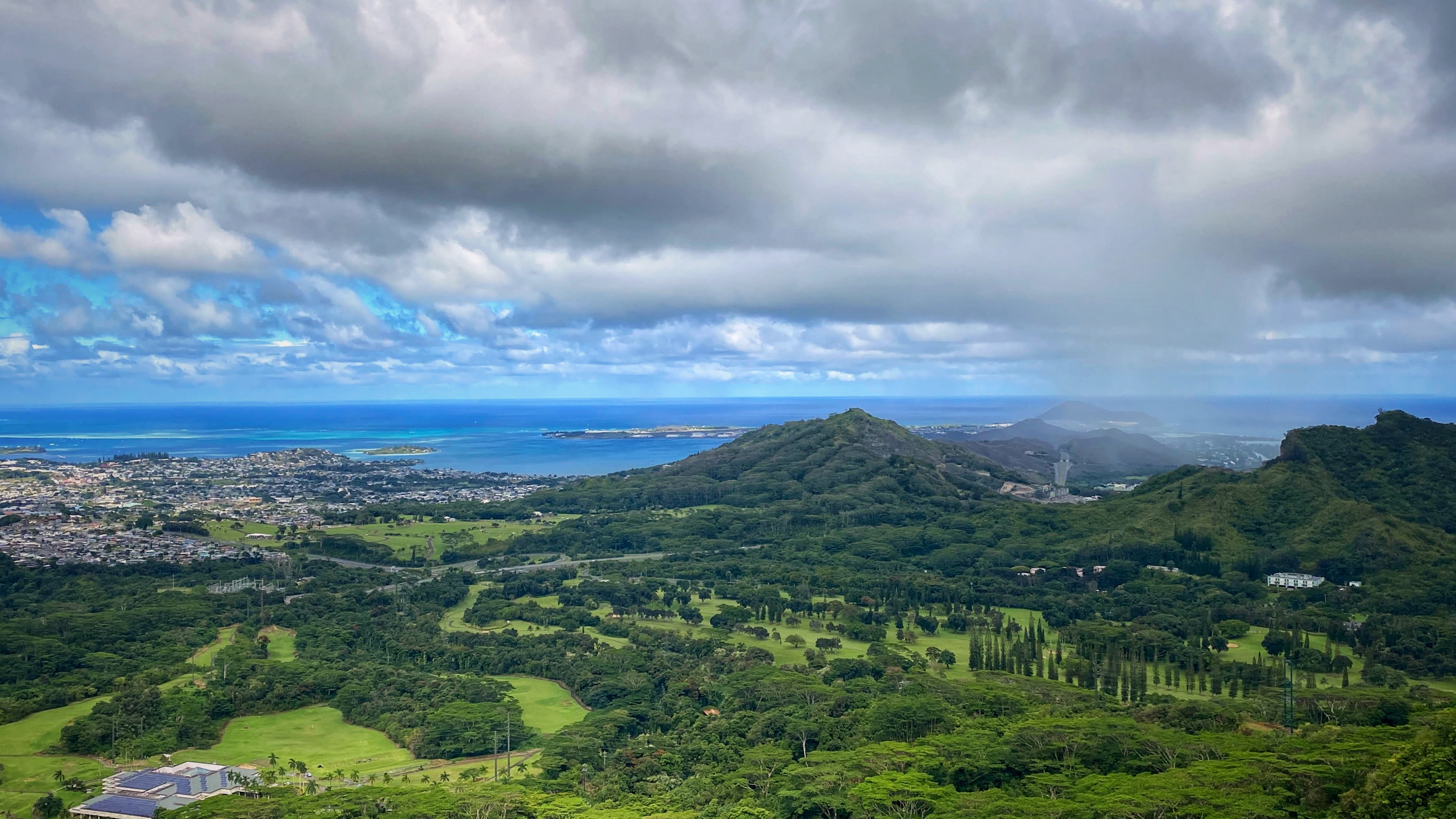 We knew that Hoomaluhia Botanical Garden is one of the best places to visit in Hawaii, but seeing it in person is something else. Spread across 400 acres, this is the largest botanical garden in Oahu. Surrounded by Ko'olau Mountains which makes for a stunning backdrop, the lush greenery all around is mind blowing. The entrance to the garden creates the feeling of entering the sets of an exotic forest-themed movie. The authorities, knowing well that the entrance makes for spectacular photo ops, have placed signs boards instructing visitors not to stop for photos 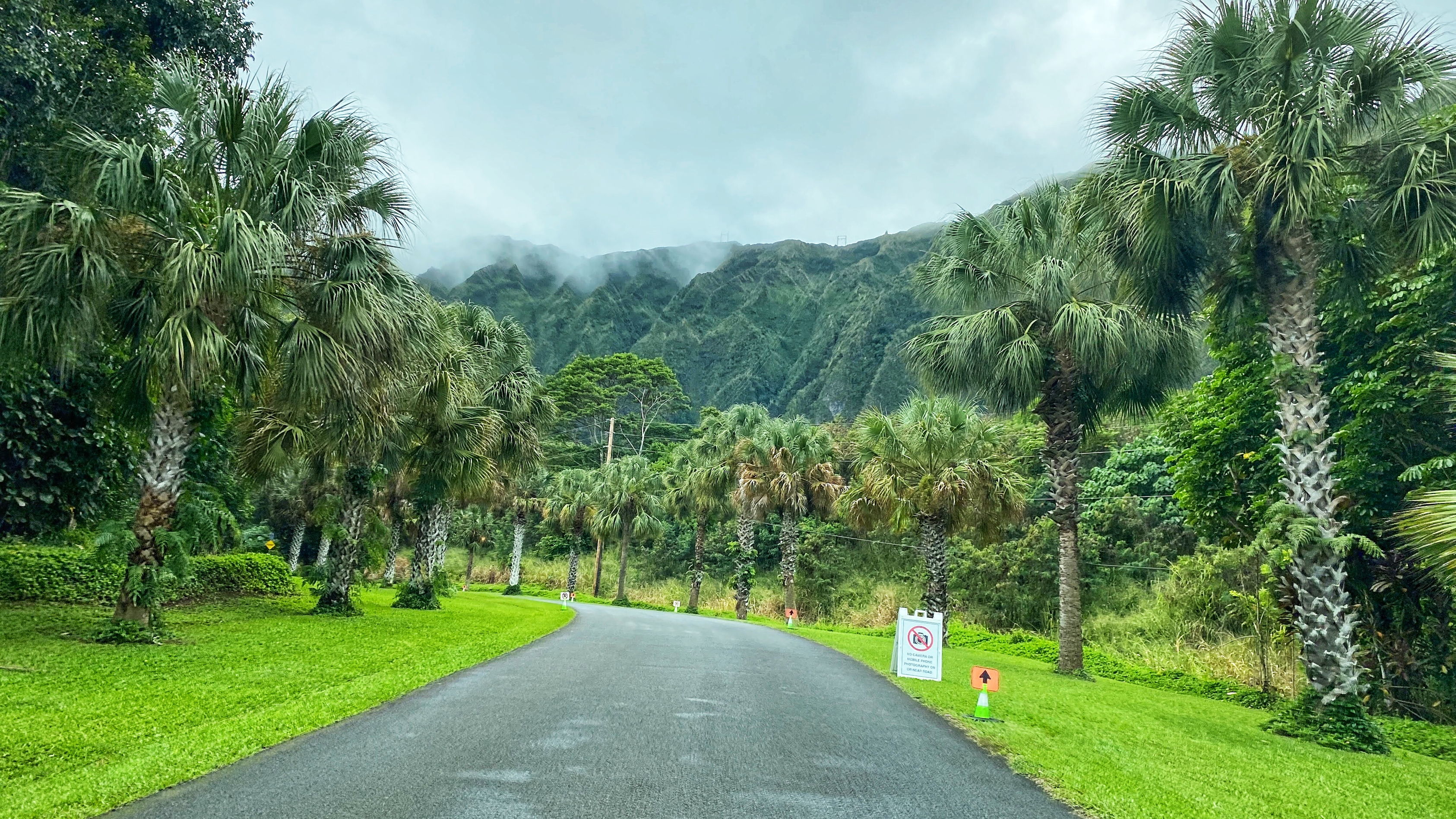 The view of the entrance to Hoomaluhia Botanical Garden, you have to see it to believe it!

Ho'omaluhia means "peaceful refuge" in Hawaiian which aptly describes the garden. We drove through this unbelievably beautiful place mesmerized by the views all around us. Visitors can go fishing (catch and release only) and kayaking at the lake. But Hoomaluhia Botanical Garden Camping is a favorite among the tourists to enjoy the scenery of this place. We spent a lot of time here and the kids enjoyed chasing the chickens that were roaming around. 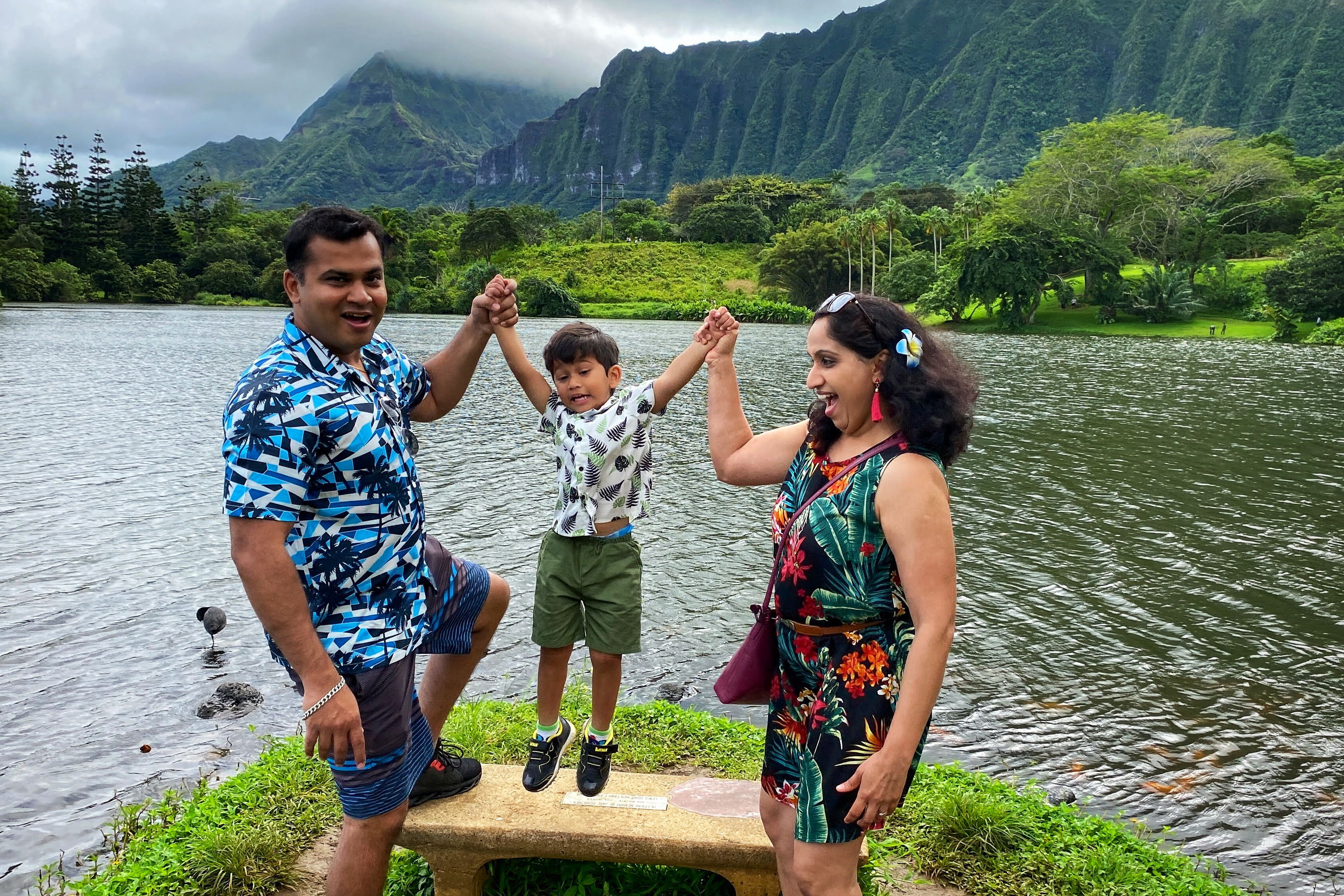 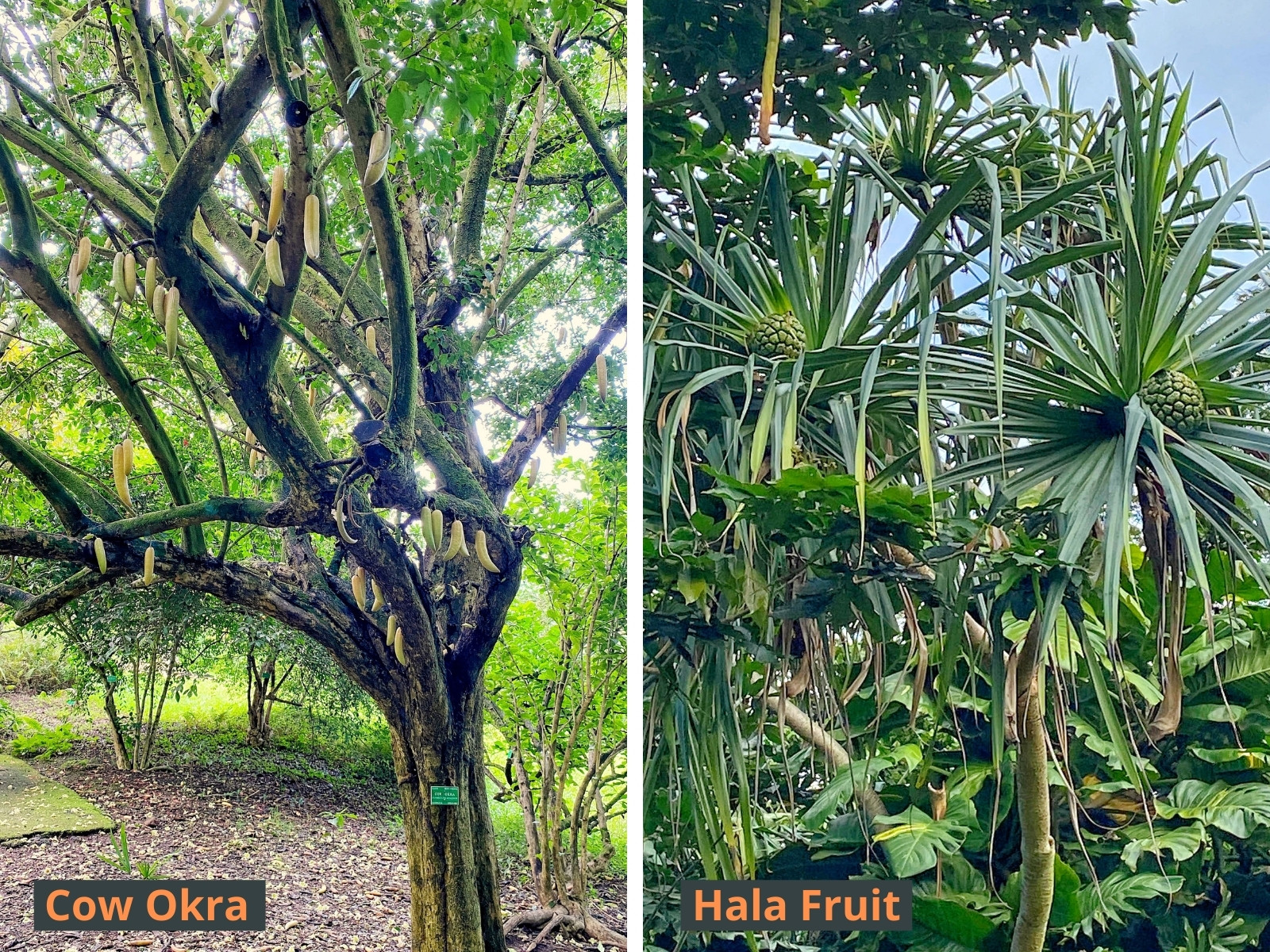 We then headed to Kailua Beach but made a quick stop en route at the famous Macadamia Nut Farm in Oahu. We were curious to check out the 15+ types of Macadamia nuts and Kona Coffee samples. Kona Coffee is exclusive to Hawaii and is only from Hualalai and Mauna Loa. Unfortunately, we were welcomed by looming dark clouds that announced the rains approaching. We quickly took some pictures at this beautiful Kailua Beach and just about made it into our Jeep before the rain clouds burst open. We drove back to our hotel through Interstate H-3 which was a fantastic drive. The tarmac cuts through Ko'olau Range with numerous tunnels and elevated bridges offering spectacular views. 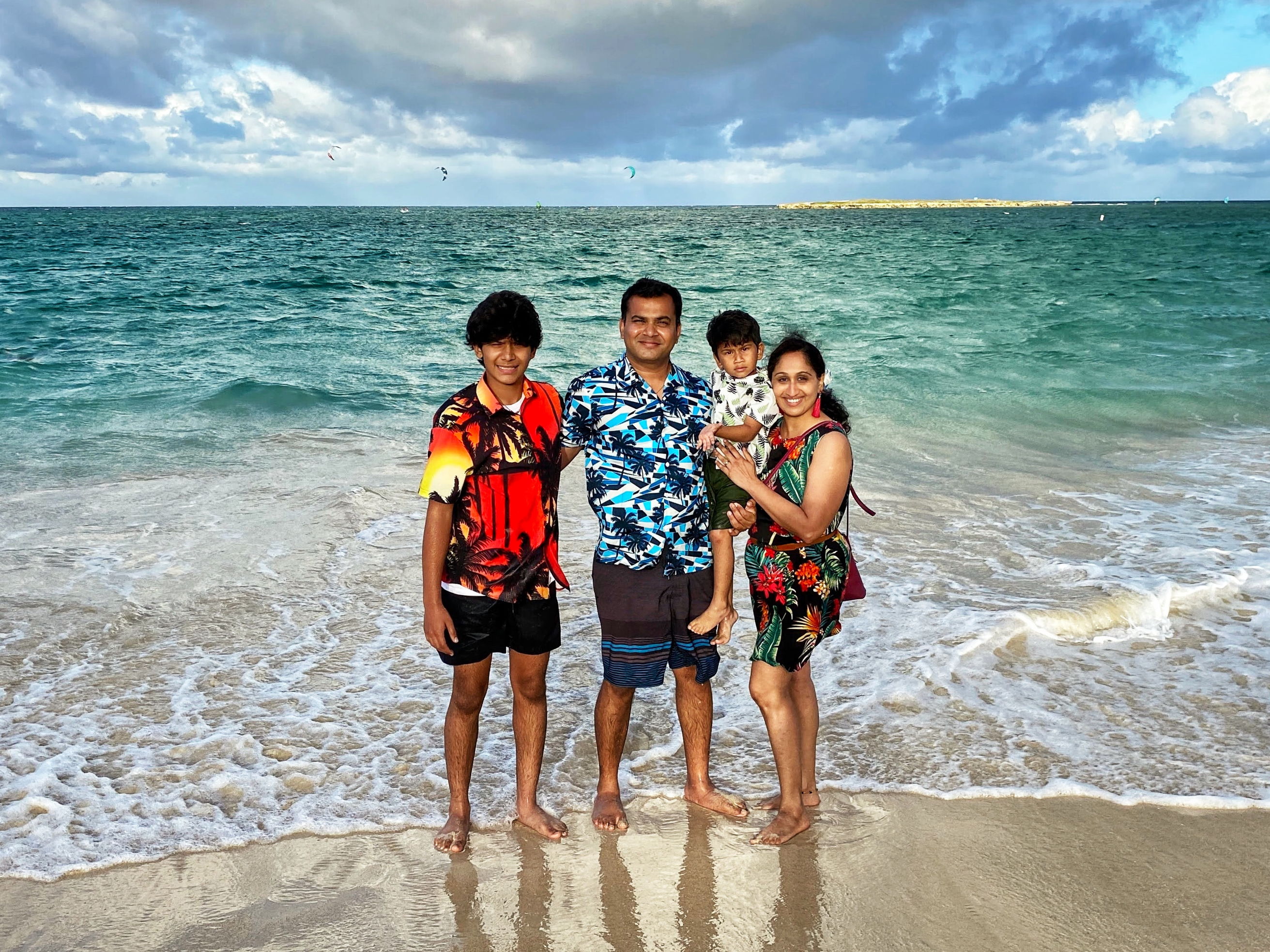 Honolulu Zoo - something for the kids

Day 4 was planned to be a must do in Hawaii for kids. So, we headed to Honolulu Zoo, which is the only zoo within a radius of 2,392 miles. This 42-acre zoo is part of the 300-acre Kapiolani Regional Park which was established in 1877 by King Kalakaua, named after his consort Queen Kapiolani. The modern Honolulu Zoo originated in 1984 but the master plan has been evolving over the years. It is designed to incorporate large open spaces to accommodate over 1,230 animals in Honolulu Zoo so that they can roam around freely. We used a map to navigate around and the kids thoroughly enjoyed spending time in this beautifully landscaped natural environment. Honolulu Zoo night tour is another experience in case you want to extend your stay. 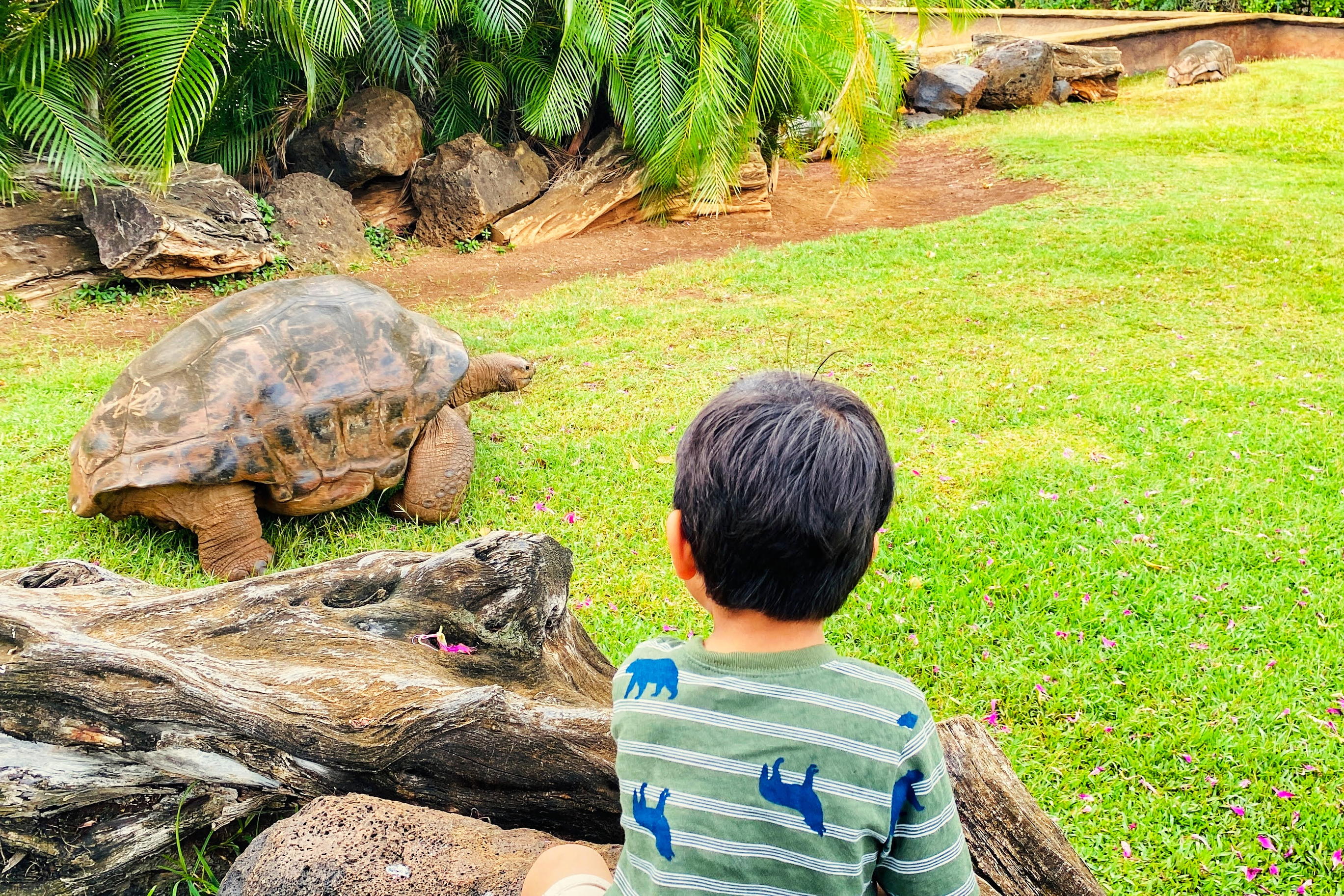 Pearl Harbor Museum, a national historic landmark in the US is a MUST visit for history buffs. This monument was built in 1962 and marks the resting place of 1,102 sailors killed on USS Arizona during the Attack on Pearl Harbor on December 7, 1941. A boat ride took us to the USS Arizona Memorial that is built near the sunken battleship. It was a surreal feeling standing close to the monument! There are many things to do at Pearl Harbor including a visit to USS Arizona Memorial Visitor Center and Pearl Harbor Aviation Museum. A large section of visitors here are Japanese besides other international visitors. We left the memorial with a feeling of solemnity and respect. 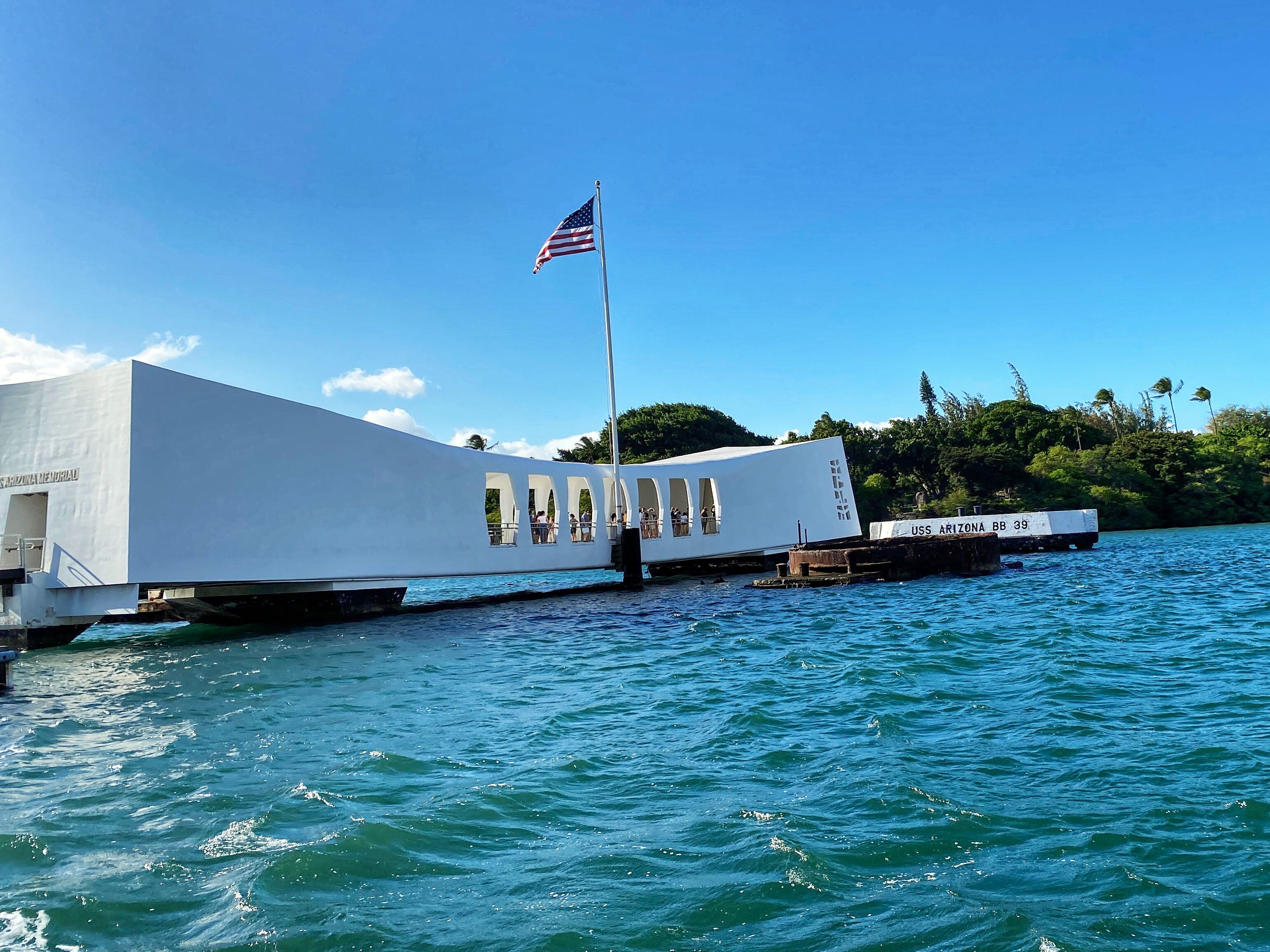 Sunset Beach is a tourist attraction in Hawaii and that's where we headed to as our last activity of the day. It has got some of the best views of the sunset in Hawaii. Known to be a surfer's paradise during wintertime and an amazing snorkeling spot during summertime, Sunset Beach Hawaii has several attractions. We reached the beach before sunset and were in anticipation of a spectacular sunset. True to its name, the view of the sunset was magical, probably the best we have witnessed. Sunset is a phenomenon that nevers ceases to amaze me every single time. It was a perfect, rather romantic end to a fabulous day. 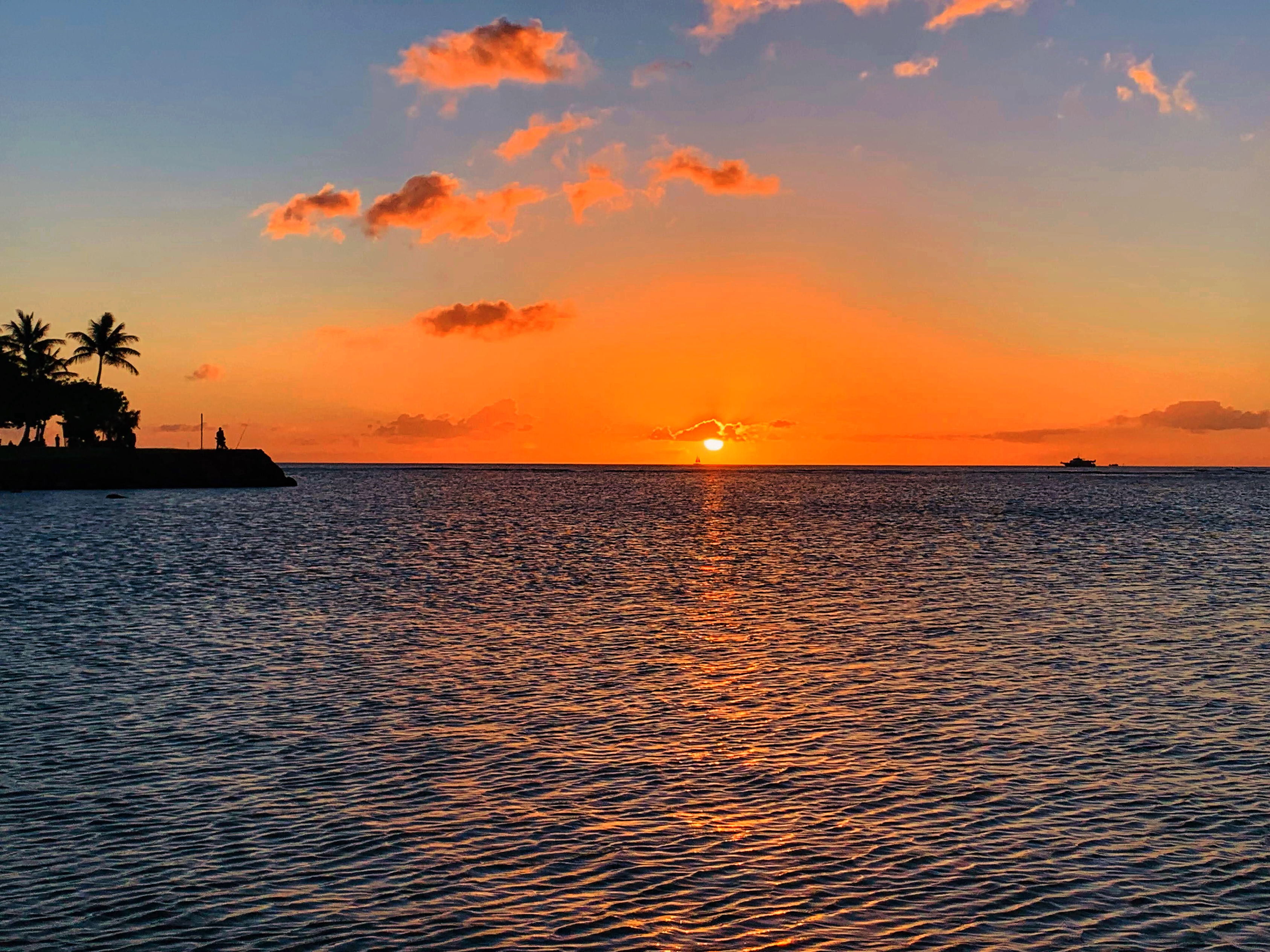 On the last day of our family vacation in Hawaii, we decided to explore the North Shores. It is the best part of Hawaii to visit for the Pineapple experience. Our first stop was at Dole Plantation. Established in 1950 as a fruit stand, it is now Hawaii's "Pineapple Experience". Pineapple Garden Maze, one of the world's biggest Maze, is a fun activity that the entire family can engage in. We then headed to Lanikai Beach, the best place to go in Hawaii for sea turtles. We were in anticipation of seeing these fascinating creatures. Unfortunately, being a windy and rainy morning, the sea turtles were not on the shore.

Slightly disappointed, we drove to Waimea Valley, our next destination. When we reached the valley, it was like entering another world. The Waimea Valley located in Haleiwa, the North Shore of Hawaii is the epicenter of ancient Hawaian history. It is considered sacred ground by the locals. This 1,875-acre site encompasses many historic sites, a gorgeous botanical garden and of course the Waimea Valley Waterfall. It is also a wildlife refuge that is home to several of Hawaii's endangered creatures. 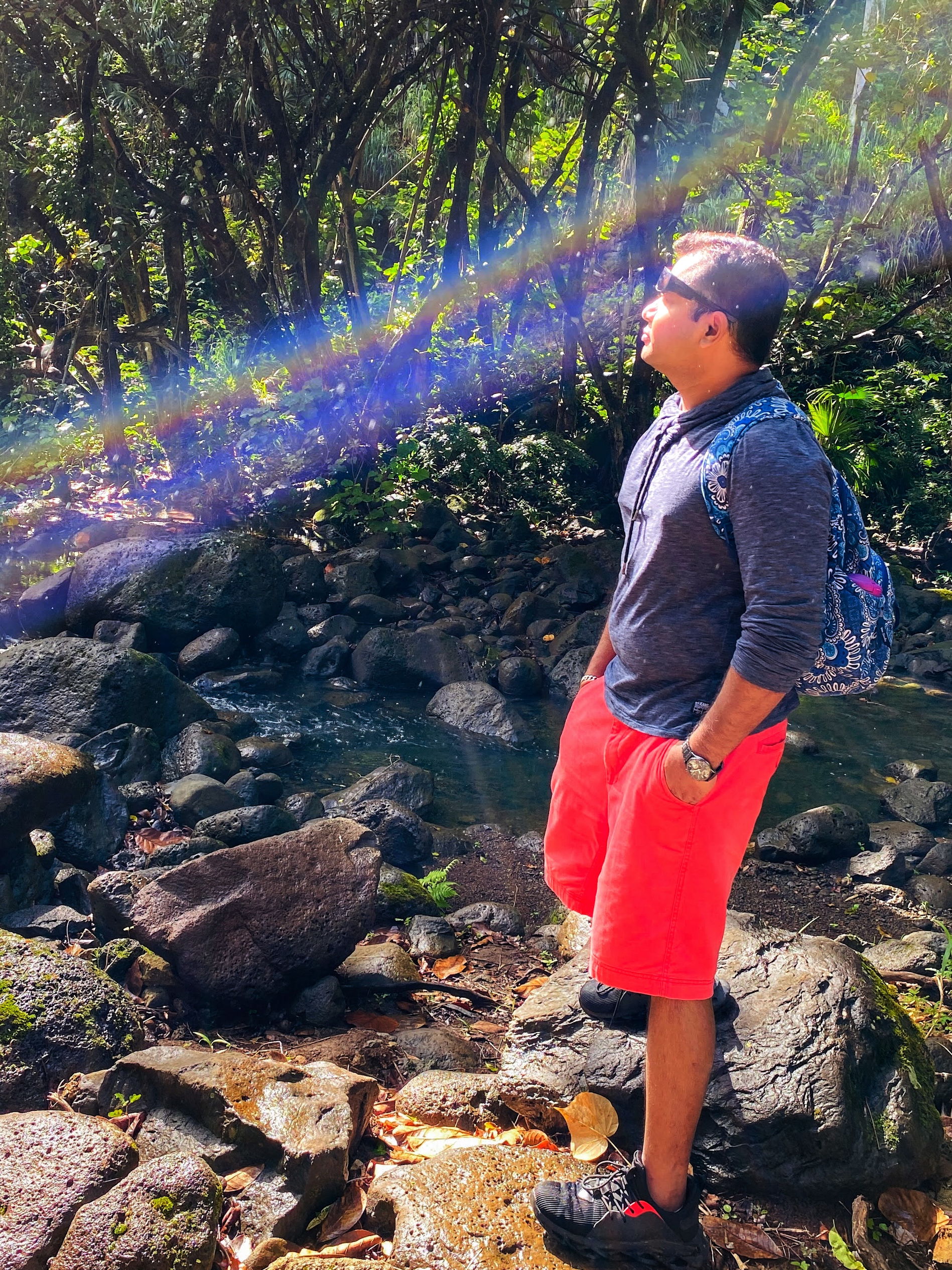 Here I am during Waimea Valley hike, basking in the exquisite beauty of a rainbow which is a common sight in Hawaii owing to the weather

Also known as the "Valley of Priests", the valley was inhabited by very religious Polynesian people. They believed in offerings to God and this valley was sacred land where these offerings were made. There is a beautiful paved pathway which is a 5.5-kilometer Waimea Valley hike that culminates at the gorgeous 45-feet tall Waimea Valley Waterfall. The walk took us through breathtaking gardens and historical sites and was a rich cultural experience. The shrines, ancient living huts, and farm land showcase the culture and lifestyle of the Hawaiian people that inhabited these places. Visitors can indulge in cliff diving or swimming here. My elder son and I got adventurous and attempted the dive which was an exhilarating experience while my younger son and wife were splashing around. 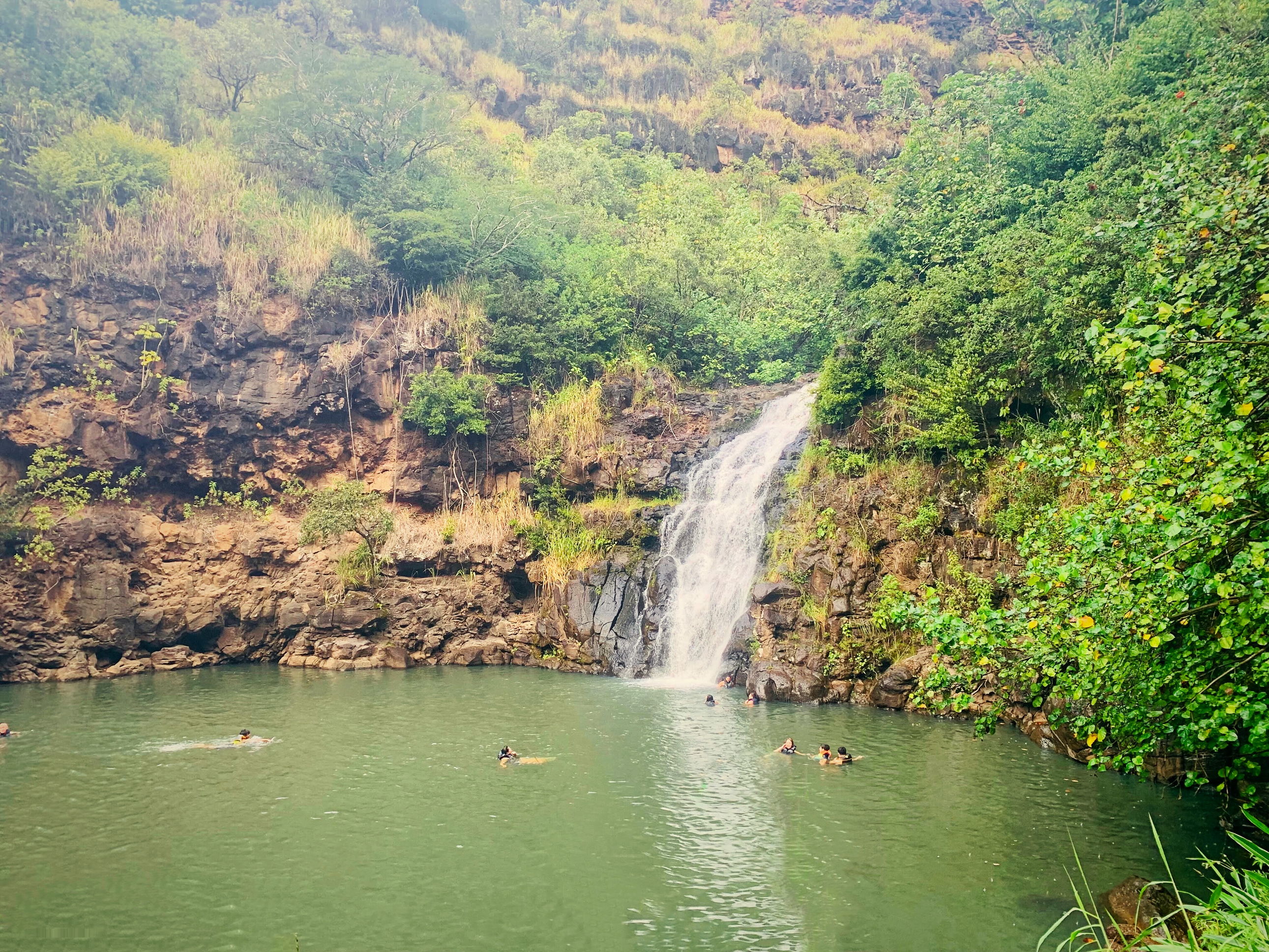 On our way back to Waikiki, we stopped at Haleiwa Historic Town which is a charming city with a Bohemian personality. This town is also known as Haleiwa Surf Town being a surfer's paradise. Haleiwa town center is very famous for shaved ice so we treated ourselves to an array of flavors of this delicious local delicacy. Content and refreshed, we drove back to our hotel enjoying the beautiful landscape along the way. 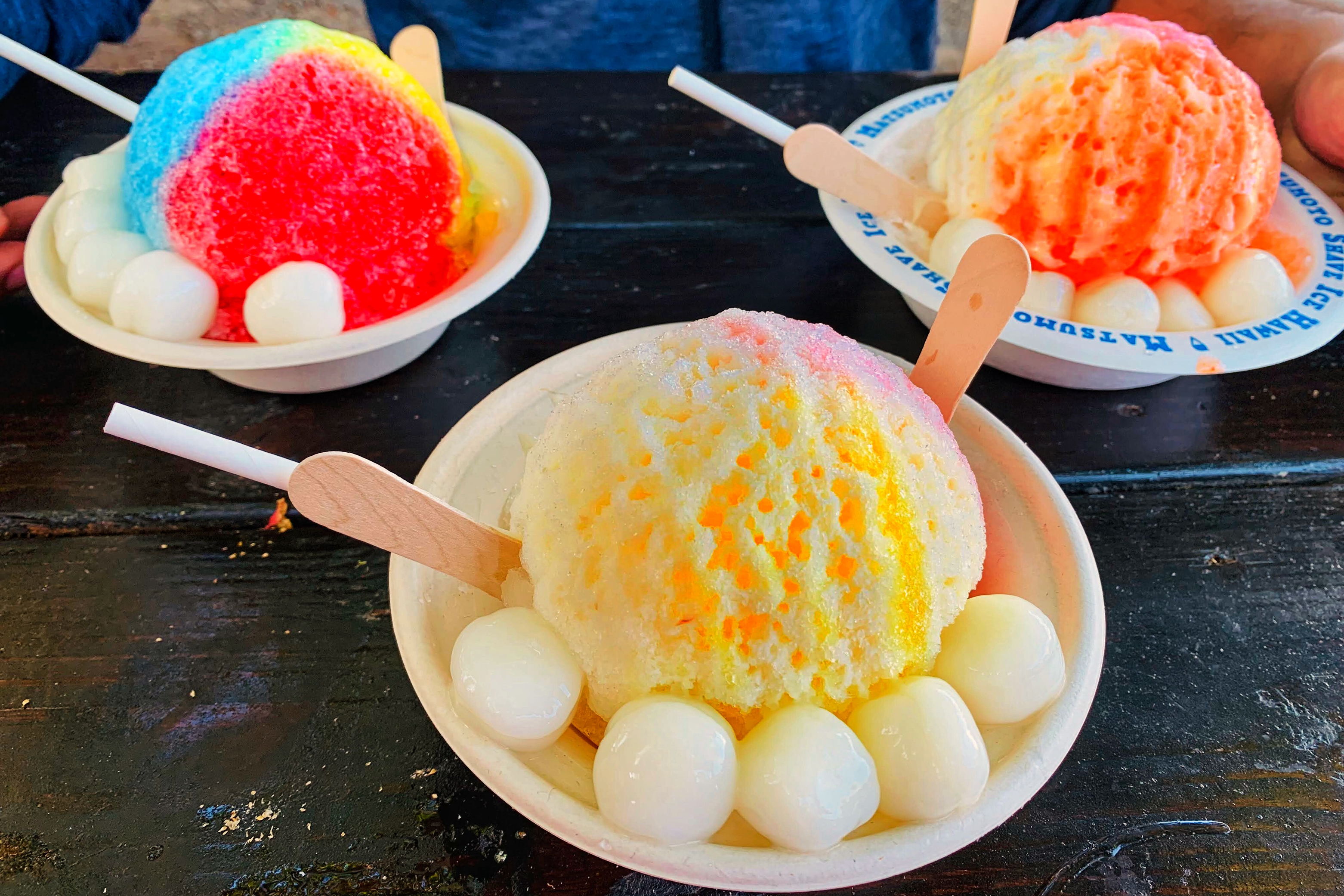 We spent five days in the paradise of the Pacific and experienced the true Aloha spirit of the best island to visit in Hawaii. Looking back, the first half of our trip was as amazing as the second half. It felt like we were here much longer because we experienced and explored the best vacation spots in Hawaii. That said, one never gets enough of versatile destinations like the Hawaiian Islands, a complete family vacation destination. As we prepared to head back home to Texas, one last glance at the Aloha State and flashes of the beauty and hospitality of this gorgeous island fills our minds. There is something so endearing about Hawaii that we took a part of it in our hearts hoping to come back again, someday. Hawaii is best between March and September. With pleasant temperatures and minimal rain, it is the ideal time to enjoy the beach and explore these beautiful islands.

The Hawaiian local food includes squid luau, poi, laulau, and lomi lomi. Being a tropical land, there is an abundance of fruits. There are flavored shaved ice and ice cream vendors around every corner in Hawaii.

Hawaii is pretty safe for travelers and is one of the safest places in the US. While on the beach and in crowded places, it is wise to be cautious.

There are plenty of activities to indulge in and places to explore in Hawaii. While there are the popular spots, there are many hidden gems to suit all types of travelers.

The vibe in Hawaii is mostly casual and colorful, so go all out with colors and prints. Ensure you have comfortable footwear as there are many lookouts and rocky places to visit. Sunscreen and sunglasses are important during the summer months.